Wrong-level spine surgery is still a concern for the spine surgeon, and this problem is not currently resolved yet (1). These errors account from 0.14% (2) to 5.3% (3) but they may be all preventable. Some complications may occur until the failed back surgery syndrome (4) to the patient, and the surgeon’s liability can be engaged, with spine surgery the most part of malpractice cases in neurosurgery (5). Some institutions and communities tried to reduce this error rate by standardized protocols (6) with good results, for example: with only one (0.12%) wrong level of 818 initially charted (1), and no evidence of wrong-level surgery at the MRI or CT-scan follow-up. Literature about the prevention of wrong-side surgery is relatively scarce (7).

In our institution, since several years, we utilize a simple way to perform percutaneous guidance to the lumbar disc using a needle and a radioscopic device. The objective of this study was to present the technical details and to report its wrong-level rate and irradiation level related to the use of an imaging device.

We present the following article in accordance with the STROBE reporting checklist (available at http://dx.doi.org/10.21037/jss-20-671).

In the Clinic La Source in Lausanne, Switzerland, during a six-month period, all consecutive patients operated for lumbar discal hernia surgery with microdiscectomy were prospectively enrolled. The inclusion criteria were: patients aged of more than 18 years, with a single-level symptomatic lumbar discus hernia with radiculopathy requiring microdiscectomy. Exclusion criteria were patients younger than 18-year-old, multi-level surgery and refusal to participate.

All patients signed an informed consent for the surgery, and for inclusion in this research protocol. The protocol was approved by the Ethical Commission of the Vaud Canton (Nr. 2019-01684). The study was conducted in accordance with the Declaration of Helsinki (as revised in 2013).

Demographic data were collected, such as age, weight, height and the American Society of Anaesthesiologists (ASA) score. Clinical data such as visual analog scale (VAS) of pain, Oswestry disability index (ODI) (9) were recorded preoperatively and at 1 month postoperatively. The duration of the landmarking procedure in minutes (min), and the surgical data such as level of surgery, operating time (from incision to closure) and intraoperative complications were also recorded. The incision length was measured in centimeters (cm). The irradiation data were additionally collected, such as the dose-area product (DAP) after the percutaneous level landmarking was performed, and the imaging field dimensions in cm with the number of radiographic acquisitions in lateral view. The effective dose E in millisievert (mSv) was calculated using the PCXMC 2.0 software (PCXMC®, STUK, Helsinki, Finland) according to standard international radiation dose calculation through a Monte Carlo simulation (10-12). Additionally, we calculated the lifetime attributable risk (LAR) of cancer death in % (13,14).

The main outcome was the wrong-level rate, and the secondary outcomes were E and LAR related to the use of the imaging device.

All the data were analyzed with the R software. Quantitative values were compared using the Wilcoxon ranked-test. Correlation between E and BMI was studied using the Pearson correlation test, and the analysis of variance (ANOVA) for its association with disc level. A P value threshold of 0.05 was considered statistically significant. All quantitative values are expressed as mean (standard deviation; minimum-maximum) in their respective units.

Once the patient is under general anaesthesia and in the prone position, we perform the regular disinfection and draping according to institutional procedures, with a Ioban film on the surface of the skin. We perform the Team Time Out. After manual landmarking (for example: L4-L5 with the posterior intercristal line) and counting of the spinous processes, a 5 cm-length 20-gauge needle is introduced vertically at approximately 3 cm (width of two fingers) from the midline on the opposite side of the planned surgery (Figure 1). The regular C-arm on standard mode (25 pulses per second) is utilized on lateral view to control the positioning of the needle, which is moved until the right disc level is reached (Figure 2). Then, the imaging device is removed and the surgical approach can begin. It is important to notice that the surgeon can leave the operating room in order to avoid irradiation during image acquisitions. The needle is let in place in order to guide the surgeon during the dissection until the thecal sac is exposed (Figure 3). The level is controlled with the surgical microscope (Pentero®, Carl Zeiss Meditec, CA, USA). If the discal hernia is not found, another radiographic control is performed to verify the disc level. The needle is finally removed at the end of the microdiscectomy, before closure. 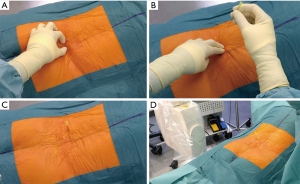 Figure 1 Intraoperative needle landmarking before fluoroscopic use. The midline is marked with a surgical pencil, then the needle is introduced at 3 cm (width of two fingers) from the midline, and then the radioscopic device is brought in a sterile setting. 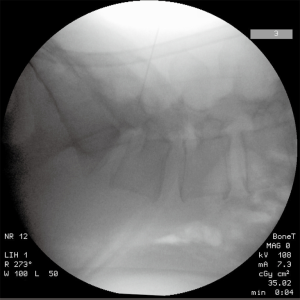 Figure 2 Intraoperative needle landmarking under fluoroscopic lateral view. The needle is introduced in the direction of the disc planned to be operated. The depth is controlled in order to avoid the nerve roots laterally. 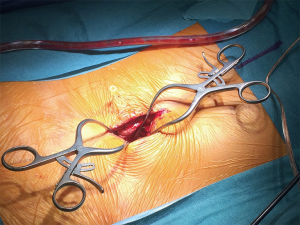 Figure 3 Intraoperative view during surgical dissection. The needle introduced on the opposite side of the hernia helps finding the good way during microdiscectomy as a “navigation-like” device.

Thirty-seven patients were eligible. Six were excluded because of refusal to participate in the present study and lack of signed consent form for two, another was operated with the O-arm and navigation (Medtronic®, Minneapolis, MN, USA), one patient had no insurance for the surgery, another had occurrence of a second disc herniation between recruitment and surgery, and the last one had not his discernment to deal with questionnaires and consent. Thirty patients were finally included for final analysis and completed the one-month minimal follow-up. The mean age was 54 [30–83] years. The mean body mass index (BMI) was 25 [17–32] kg/m2. The mean ASA score was 1.7 [1–3].

There was no wrong-level surgery (0%) among the whole procedures.

There were 3 (10%) dural tears, immediately repaired with direct suture with Prolene® 5/0 and the use of Dura-seal® and TachoSil®. No reintervention was necessary. No major bleeding or other complications such as wound infection occurred.

All the previous data are summarized in Table 1. 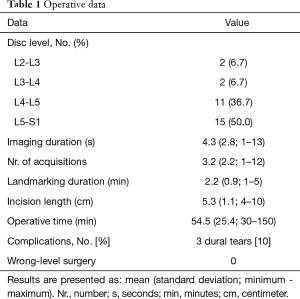 Average DAP was 327 mGy∙cm2. The mean E related to the imaging device was 0.032 mSv. The LAR was a mean of 1.17×10-4%. E was significantly correlated with the BMI (P=0.05) and associated with the disc level, comparing the L5-S1 level with upper levels (P=0.05). Irradiation related data are detailed in Table 2, and correlation studies in Table 3. 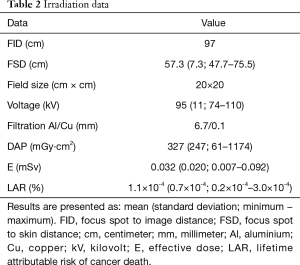 The most important finding in this work was the 0% of wrong-level surgery allowed by the use of the needle-guidance landmarking. The additional procedure time and irradiation level were acceptable. For comparative purposes, one year of continuous natural irradiation received by the people in Switzerland is a mean of 4.3 mSv (15), 134 times higher than our results. Considering this information, every patient only received a mean of 2.7 times of a one-day natural irradiation during the disc landmarking. Besides, the LAR was very low. To our knowledge, this is the first time that such a technique is reported in the literature, especially with irradiation data related to the imaging device use.

Clinical results in VAS and ODI scores of the current study were similar to other studies, described in a recent systematic review and meta-analysis (16). Correlation between E and BMI was confirmed, such as reported in the medical literature (10). This can be explained by higher voltage produced by the imaging device in case of higher BMI to get an adequate image display. Levels upper than L5-S1 required significantly higher E for disc landmarking. This could be explained by the need to move the imaging device and additional acquisitions for upper levels than L5-S1 from the sacrum reference on lateral fluoroscopic views.

Many authors recommend to confirm radiographically the vertebral level (17-21). Furthermore, the North American Spine Society advocates a checklist named “SMaX” (Sign, Mark and X-ray program), as follows: the surgeon should sign the level before surgery and mark it on the patient with a metallic device with the use of radiography inside the operating room (6).

Finally, Irace et al. proposed a system (1) based on a protocol from the Joint Commission on Accreditation of Healthcare Organizations. It is divided in three steps before the beginning of the procedure: preoperative verification, marking of the operative site and time-out before incision. They recorded a decrease from 8% to 5% of wrong level surgery among unexpected occurrences involving death or serious physical or psychological injury or the risk thereof. Irace and colleagues described the IRACE method, which combines the SMaX protocol and the “knife check” strategy (22), in which the scrub nurse asks the surgeon if they have checked the side before the knife is handed and the surgery begins. In our institution, we are used to performing similar protocol as IRACE’s.

The main advantage of this system is the accuracy of the needle placement, and the “navigation-like” guidance allowed by the needle let in place during the approach. We can also use several needles in order to landmark more levels. And this technique can be utilized at any level of the thoracic and/or lumbar spine, with concern to the risk of pneumothorax at thoracic levels. It is not recommended at the cervical spine, because of the vascular and nervous structures during the anterior approach, but follows the same principles for posterior landmarking. Besides, even if there is no spinous process, this technique can be used. The main disadvantage is, same as the navigation frame, the need to keep the needle in its first place, without moving or losing it, which would lead to false information and some possible wrong-level guidance. Considering anatomical factors, if the superficial dissection and operative microscopy are not performed in an oblique enough direction, following the needle direction, a wrong disc could be operated instead. Thoroughly following the needle direction is also mandatory to avoid wrong-level surgery. For adequate and accurate guidance, we recommend to the surgeon to participate in the landmarking process instead of entering the operating room after every setting is in place for the patient.

There were some limitations of this work, such as the few number of patients. Furthermore, we can discuss the short follow-up of patients, regarding clinical scores and the risk of infection after a longer time, which is between 0.5% and 2.1% (23). The additional infection risk related to the needle insertion seems to be neglectable. In order to avoid such risk, we always put the needle in healthy skin, and after local asepsis. Finally, the current study lacks certainty that the operated level was correct in all cases. But, considering good clinical scores postoperatively, we can argue that the strategy to avoid the wrong level in lumbar microdiscectomy was effective.

We advocate the use of percutaneous needle guidance, avoiding wrong-level microdiscectomy and helping the surgeon as a “navigation-like” device with minimal additional irradiation for the patient. Further studies on more patients are needed and studying the needle guidance through other spinal surgery indications.

Reporting Checklist: The authors have completed the STROBE reporting checklist. Available at http://dx.doi.org/10.21037/jss-20-671

Conflicts of Interest: All authors have completed the ICMJE uniform disclosure form (available at http://dx.doi.org/10.21037/jss-20-671). The authors have no conflicts of interest to declare.

Ethical Statement: The authors are accountable for all aspects of the work in ensuring that questions related to the accuracy or integrity of any part of the work are appropriately investigated and resolved. The trial was conducted in accordance with the Declaration of Helsinki (as revised in 2013). The study was approved by the Ethical Commission of the Vaud Canton (No.: 2019-01684) and informed consent was taken from all individual participants.