Utilization of intraoperative neuromonitoring throughout the United States over a recent decade: an analysis of the nationwide inpatient sample

Adult and pediatric spine surgeries have increased in numbers over the last several years (1). Given the difficult nature of spine surgery, ranging from simple lumbar decompression to advanced spinal deformity, iatrogenic neurologic injury is a rare but real complication. Recent studies have shown that the annual incidence of perioperative neurologic deficits after cervical and lumbar spine surgery increased by 54% from 0.68% in 1999 to 1.05% in 2011 (2). These neurologic complications are especially prevalent (up to 8%) in procedures requiring vertebral column resections (VCR). Given these findings, a reliable method of detecting potential neurologic complication during spinal surgery is essential (3,4).

In an effort to reduce perioperative neurologic deficits, intraoperative neuromonitoring (IONM) was introduced in the 1970s with notable technologic advancements over the last four decades (5). Hamilton et al. reviewed over 100,000 spine surgery procedures in the Scoliosis Research Society morbidity and mortality database and demonstrated use of IONM in 65% of the cases over the course of 3 years from 2004 to 2007 (6). The study further shows that the combined somatosensory-evoked potentials (SSEPs) and motor-evoked potentials (MEPs) had a sensitivity and specific for new spinal cord deficit of 0.43 and 0.98, respectively. Given the success in prompt detection of intraoperative neurologic complications, IONM use has become more commonplace in spine procedures over the last few decades.

The purpose of the current study was to determine the trends in IONM over the recent half decade and to evaluate the uptrend in procedure utilization. By performing a longitudinal analysis of an administrative inpatient database, we may understand the yearly trends and economic data surrounding the use of IONM. An appreciation for the yearly national aggregate cost of the procedure is of significant importance to surgeons, policy makers and hospital administrators.

Data was collected from the National Inpatient Sample (NIS) database between 2008 and 2014 across 44 states. The NIS database was developed for the Healthcare Cost and Utilization Project (HCUP) and constitutes the largest all-payer inpatient database in the U.S. The database represents a 20% sample of discharges from U.S. hospitals (excluding rehabilitation and long-term acute care hospitals), which is weighted to provide national estimates.

The NIS database was queried for IONM from 2008–2014 using international classification of diseases, ninth revision, clinical modification (ICD-9 CM) code 00.94. There were no additional criteria for patient exclusion.

Demographic and economic data was recorded. Insurance types included Medicare, Medicaid, private, uninsured, and other. The “other” category included workman’s compensation, TRICARE/CHAMPUS, CHAMPVA, Title V, and a number of other government programs. The annual number of surgeries, patient age, sex, total charges, total costs (in then-year dollars), insurance type, length of stay (LOS), location, and frequency of routine discharge, defined as home discharge without visiting nursing care, were recorded. Aggregate charges or the “national bill” was defined as the sum of all charges for all hospital stays in the U.S. Total charges were converted to costs using cost-to-charge ratios based on hospital accounting reports from the Centers for Medicare and Medicaid Services (CMS). Costs reflect the actual costs of production, while charges represent what the hospital billed for the case.

Descriptive statistics were performed to compare variables. Two-sample student t-test was employed to analyze the difference in continuous variables and Chi-squared or Fisher’s exact employed for categorical variables. Findings were considered statistically significant when P<0.05. Analysis was conducted using IBM SPSS Statistics Version 24. The NIS database is de-identified and was therefore deemed exempt by our institutional review board.

An estimated 125,835 patients [standard error (SE): 5,856] received IONM in 2014, which was an increase by 296% from 2008, when an estimated 31,762 patients (SE: 5,848) received the procedure (Figure 1). The annual total number of procedures utilizing neuromonitoring increased over the 7-year period consistently across all payer types: privately insured, Medicare and Medicaid patients. However, the increasing rate of neuromonitoring usage over the 7-year study period was most prevalent in privately insured and Medicare patients (45.0% and 36.8%) when compared to the Medicaid patients (9.2%) (Figure 2). 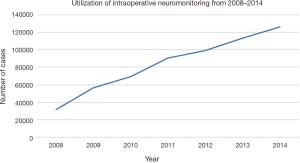 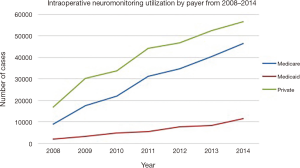 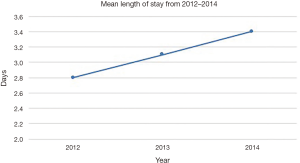 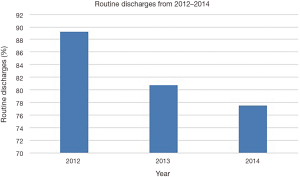 The greatest use of IONM occurred in patients between the ages of 45 and 64, which represented 44.5% of all utilization. Among the patients who received IONM, females received the procedure more often compared to males every year from 2008 to 2014 (52.8% and 47.1%, respectively; P=0.60). When stratifying by median income for patient zip code, there was substantial difference in the rate of monitoring for central nervous electrical activity between low and higher income groups (19.9% vs. 78.1%, respectively) (Figure 5). Moreover, IONM was significantly more likely to be utilized at urban teaching hospitals rather than nonteaching hospitals or rural centers (72.9% vs. 25.0% vs. 2.2%, respectively). 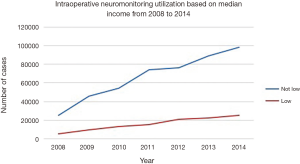 Figure 5 Intraoperative neuromonitoring utilization by median income in the U.S. from 2008–2014. When stratifying by median income for patient zip code, there was substantial difference in the rate of monitoring for central nervous electrical activity between low and higher income groups (19.9% vs. 78.1%, respectively). 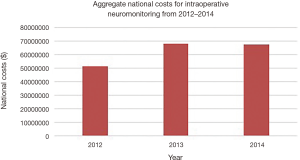 This study employed the largest inpatient database in the Unites States to analyze trends in the demographics, cost and utilization of intra-operative neuromonitoring from 2008 to 2014. Our data demonstrates a gradual yearly increase in the number of IONM procedures from 2008 to 2014. By 2014, the total number of neuromonitoring procedures increased by 296% compared to 2008. The findings in our review match closely with similar database studies in the literature. Ajiboye et al. retrospectively analyzed the PearlDiver Database from 2007 to 2015, collecting data from patients receiving electromyography (EMG) for instrumented posterolateral lumbar fusions (PLFs) in the U.S. The authors found that EMG was used in 25.1% of the cases with steady increase in the use of EMG from 14.9% in 2007 to 28.7% in 2009 (7). Similarly, James et al. analyzed the NIS database from 2007–2011 on the trend of IONM use and reported gradual increase from 1% of all cases in 2007 to 12% of all cases in 2011 (8).

The increasing use of IONM has been attributed to improved intraoperative neurologic deficit detection, recent increasing number of spinal fusion procedures, development of optimized treatment algorithms, and quick adaptation of newly developing technology (1,8,11-15). The incidence of perioperative neurologic deficits after elective spine surgery have steadily increased over the time period from 1999 to 2011 with associated increased rates of morbidity and mortality as well as increased health care utilization costs (2). Many papers have been published analyzing the predictive value of using neuromonitoring to warrant its use to prevent neurologic complications in spine surgeries, ranging from simple lumbar spine decompression to complex adult spinal deformity corrections. To date, the literature is conflicting regarding the ideal indications for neuromonitoring use, but the general consensus is supportive of using it for complex spine procedures including revision surgeries and deformity correction (6,16).

The benefit of using neuromonitoring has been validated by numerous studies involving scoliosis correction, revision surgeries and vertebral osteotomies. Krishnakumar et al. showed decreased postoperative neurologic complications while using SSEP and TcMEP in a prospective analysis performed on 52 patients undergoing scoliosis correction from 2013 to 2015 in a single center review (17). An extensive 23-year retrospective study of 3,436 consecutive pediatric spine surgery patients also showed that intraoperative intervention after neuromonitoring detection reduced permanent neurologic deficits to 6 patients (0.17%) (11). Likewise, revision spine surgeries were shown to have new neurologic deficit at a 41% higher rate compared to primary cases, supporting the use of neuromonitoring for this spinal pathology (18). The benefit of using IONM is further epitomized in complex spinal deformity corrections requiring VCR and pedicle subtraction osteotomy (PSO). Use of neuromonitoring in these instances has demonstrated improved clinical outcomes in both primary and revision procedures (3,4,19-22). Furthermore, the development of expert consensus-based treatment algorithms on IONM alerts have also led to efficient and complete management of potential neurologic deficits in any given situation (14,23,24).

However, multiple studies have suggested that neuromonitoring effects may have limited benefits in relatively simple spine surgeries. Neuromonitoring use in single-level spinal procedures showed decreased neurologic complications only among lumbar laminectomies without any significant improvement in anterior cervical discectomy and fusions (ACDF), lumbar fusions, or lumbar discectomies (23,25,26). Furthermore, neuromonitoring use in minimally invasive 1- and 2-level transforaminal lumbar interbody fusions did not decrease the incidence of malpositioned pedicle screws (27). Given little to no significant improvement on preventing neurologic complications in single level spine procedures and minimally invasive spine surgeries, neuromonitoring may only lead to increased health care costs without added benefit in unindicated surgical cases.

Despite the increase in IONM procedures over the last half decade, there is limited literature on the cost-effectiveness of the procedure. Our study shows that the mean total cost of IONM increased by 21% from $21,477 in 2012 to $26,053 in 2014. This finding was further corroborated by a drastic increase of total aggregate national costs by 32% from $51,294,854 in 2012 to $67,717,196 in 2013. In addition, the increase in LOS from 2.8 days in 2012 to 3.4 days in 2014 and decrease in routine discharges from 89.25% in 2012 to 77.55% in 2014 after IONM are findings suggestive of rising added costs to national health care. Nuwer et al. suggests that SSEP monitoring prevents one deficit in every 200 cases, and estimates the cost of preventing one new neurological deficit as $120,000 (28). This amount is significantly less than even the first-year health care costs of a newly paraplegic patient, which rationalizes the use of IONM in the face of increasing direct and indirect costs implied from our study (29). The increase in complex spinal deformity correction over the last few years can also explain why there is increase in costs and LOS, and decrease in routine discharges over the last several years (1). However, a thorough statistical study on the cost-effectiveness of IONM in the face of rising costs and increasing spinal surgeries is necessary to fully justify the economic validity of using IONM.

Many of the limitations of this study are due to the intrinsic limitations of large patient databases. The NIS database does not include physician-based fees, and costs are calculated from hospital specific cost-to-charge ratios, which may exaggerate surgical cases. Still, these hospital specific cost-to-charge ratios have been internally validated by Agency for Healthcare Research and Quality. Inherent to a large study, the surgeries were performed by a large variety of surgeons, allowing for differences in surgical technique and potential indication bias. Furthermore, there can be potential inaccuracies of ICD-9 CM billing records, errors transferring data from hospital records to administrative records, underreporting of procedures, or exclusion of missing cases in the NIS database.

In the current analysis of the NIS database, the rate of IONM progressively increased over the last half decade. In addition, mean hospital costs and aggregate national charges increased for IONM. Our findings corroborate the trend in IONM usage in the current literature, which may be a direct consequence of improved efficacy of the procedure, and the development of optimized treatment algorithm. There are many conflicting reports on the validity and necessity of IONM in the literature, which calls for a prospective randomized trial to rigorously evaluate the long-term outcome and cost effectiveness of IONM from a national healthcare perspective.