Lumbar discectomy for the treatment of lumbar radiculopathy from nerve root compression is the most commonly performed neurosurgical procedure with over 300,000 cases performed yearly in the USA (1). Lumbar disc herniation requiring surgical management has been described in the literature as early as the 1920’s by Dandy (2). Only several decades later did the entity of far lateral disc herniation (FLDH) appear in literature. The reason behind the delay was likely due to the diagnostic failure to detect these lesions radiologically through X-ray and CT myelography (3,4). Far lateral disc herniation is also known as foraminal, intraforaminal, far lateral or extreme lateral disc herniation, which by definition refers to a disc herniation or fragment that resides beneath and lateral to the vertebral facet, and is thus hidden on conventional imaging of the spinal canal. Currently the use of magnetic resonance imaging (MRI) has radically improved the detection of FLDHs with the incidence of FLDH ranging between 0.7–1.7% of all disc herniations (5). The surgical treatment of FLDHs has remained a taxing procedure for many spine surgeons due to the inherent difficult anatomical access to the lateral interpedicular compartment without fear of causing nerve damage, or damaging the overlying facet joint, which may place the patient at risk of an unstable spine necessitating spinal fusion surgery in the future. Surgeons therefore often hesitate in offering surgery and rely on conservative therapy in the treatment of FLDHs. These cases therefore technically pose greater challenges to treat when compared to the more common median or para-median disc herniation counter parts. Although the surgical approaches for FLDHs have been previously described in the literature (6,7), we have found their descriptions complicated, if not confusing, and hence may not provide confidence to junior or trainee spine surgeons. This article describes a safe and simple surgical approach for FLDHs and we hope others may find FLDH cases less challenging than the straightforward centrally or para-centrally herniated discs.

Our classification of lumbar disc herniations is based on the location of the herniated disc as presented on the axial image from an MRI. The classification helps determine the optimal surgical intervention for each type of disc herniation with consideration given to minimize or completely avoid facetectomy to preserve stability of the spine. Type 1 disc herniations are lesions that are central or contained within the spinal canal. Type 2 and 3 lesions are categorized based on their relative laterality in relation to the facet joint (Figure 1). Reports in the literature have suggested FLDHs occur more frequently in the upper lumbar region (L1/2, L2/3 & L3/4 levels) and are more common in older patients (8). In our practice, we have encountered far lateral disc herniations most commonly at the L4/5 level and over time this has become more frequent in younger patients. FLDHs are also more likely to manifest a sequestrated fragment compared to the para-central counterpart.

Standard preoperative preparation for lumbar discectomy is used for this approach. The surgery is performed under general anesthetics with prone positioning and use of the Jackson Spinal Table (The Mizuho Group, CA, USA) for pressure support. Routine preoperative intravenous antibiotic and perioperative deep vein thrombosis prophylactic measures are used.

To describe our approach we refer to a L3/4 level FLDH to be used as an illustrative case. At the beginning of the surgical procedure, we recommend obtaining a lateral X-ray of the lumbar spine with spinal needles used as markers to identify the pedicles of L3 and L4. The skin incision is then made between these two markers. The exposure used for foraminal disc herniations and FLDH can be approached either through the traditional midline approach, or the paramedian Wiltse approach (9). Following the fascia opening, either a sub-periosteal dissection or blunt dissection between the multifidus and longissimus muscles is performed for a midline and paramedian incision respectively. Subperiosteal dissection is performed in either case to extend the exposure laterally to the L2/3 & L3/4 facet joints to identify the lateral edge of the pars interarticularis and the lamina. These structures should all be seen clearly before continuing the procedure. For a L3/4 lateral disc herniation the L3 nerve root will be affected. In the majority of cases, the sequestrated fragment pushes the nerve root posteriorly or superiorly. Given the relative position of the L3/4 disc space to the exiting L3 nerve root, it is very unlikely for the nerve to be pushed inferiorly. It is therefore recommended that bony decompression and flavectomy are initiated over this “safety zone” area (Figure 2). It is not uncommon for the operator to pursue the descending L4 nerve root, which is unnecessary for this type of disc herniation. At this stage the operating microscope is used. We recommend avoiding the superior part of the exposure area which contains the L2/3 facet joint and the L3 pedicle underneath. Using a high-speed drill, 2–3 millimetres of the ‘safety zone’ located in the lateral aspect of the lamina-facet junction inferior to the pars interarticularis is removed. We recommend using a 3 mm match head drill bit with irrigation attachment. An angled curette or a blunt hook can then be passed underneath the lateral edge of the lamina easily. With either a 1 or 2 mm angled Kerrison roguer, the left shell of bone is removed. Under magnification, the lateral edge of the ligamentum flavum that is attached to the most lateral aspect of the pars and lamina (also known as the falciform ligament) is then identified. Using a sharp knife and a dissector the falciform ligament is opened. There are no neural structures beneath this safety zone opening. Occasionally an epidural vein may be encountered and can be coagulated safely. At times, the sequestrated fragment can come into view after opening the ligament and at this stage, the surgery can be completed as soon as the fragment is removed. Identifying the transverse L3 nerve root is not required but can add to safety of the procedure. After opening the falciform ligament and reaching the epidural space, the epidural fat may be encountered which can act as an anatomical landmark to help orientate the rest of the surgical procedure. The falciform ligament is taken slowly using 1 or 2 mm Kerrison roguer. Cutting from inferior to superior with a blunt dissection, the L3 nerve root will come to view superiorly. Depending on the location of the disc herniation the dissection can be extended laterally or medially as required. The sequestrated disc fragment that was pushing the nerve root posteriorly or superiorly is retrieved. The affected L3 nerve root will then be visualized more clearly often accompanied by visible pulsations of the dural or the nerve root itself. Standard hemostasis and closure in layers can then follow. 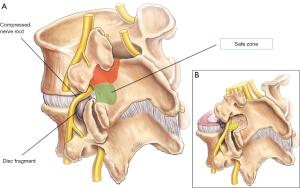 Postoperative management is no different to patients who undergo the standard discectomy used for median and para-median disc herniations and we encourage our patients to mobilize as soon as possible. In our experience the success rate of the surgical procedure for FLDH is as good as the success rate for para-median approaches, as long as these cases are done as early as required.

In summary the steps to remove the FLDH at L3/4 level are the following:

Using the described surgical technique, sixteen cases of FLDH were performed by our principal author between March 2013 and August 2015. Patients’ ages ranged between 31–83 years. Two patients had diabetes and body mass index ranged between 24.9 to 32.8 kg/m2.

Ten patients were males. One case involved work-related injury. One case was at L1/2 level, three cases at L2/3, three cases at L3/4 and the majority were at L4/5 level. The majority of cases (twelve) were on the right side. All patients presented with radiculopathy, which did not respond to conservative treatment including nerve blocks. Surgical operative timing ranged between 30 to 90 minutes. The radiculopathy disappeared immediately after surgery for all patients. Two patients were left with residual numbness at the same preoperative dermatomal distribution. All patients were discharged on postoperative day 1. One patient who had a previous history of deep vein thrombosis (DVT) however developed postoperative DVT on postoperative day 7.

In our experience, the lateral pars interarticularis method for FLDH can be performed safely using this simple approach. We hope that this methodology can instil greater confidence for the surgeon and decrease the anxiety associated with the common lack of familiarity with this region. This ultimately will help to treat patients in a timelier manner, resulting in better outcomes. This technique involves minimal bone-work and if performed together with an intramuscular approach, it may result in less postoperative pain and a reduced length of hospital stay.