Spinal epidural lipomatosis (SEL) is a rare condition defined by un-encapsulated overgrowth of normal extra-dural fat, which can compress the spinal canal or cord (1-3). SEL has been regarded as a consequence of long-term administration of exogenous excess steroids, local corticosteroid injections and endocrinopathy associated with a variety of glucocorticoid-producing systemic diseases that included Cushing’s syndrome, obesity, carcinoid tumor, and hypothyroidism (1,2,4,5). Quite rarely, SEL occurs as an idiopathic condition that means in the absence of recognized predisposing factors (5).

SEL is often an incidental finding and the majority of patients remain asymptomatic (1). However, SEL has been related to a variety of neurologic impairments, which included back pain, radiculopathy, claudication, or myelopathy (4). There are very few reports of SEL in association with scoliosis (3). We present a case of scoliosis caused by idiopathic SEL. 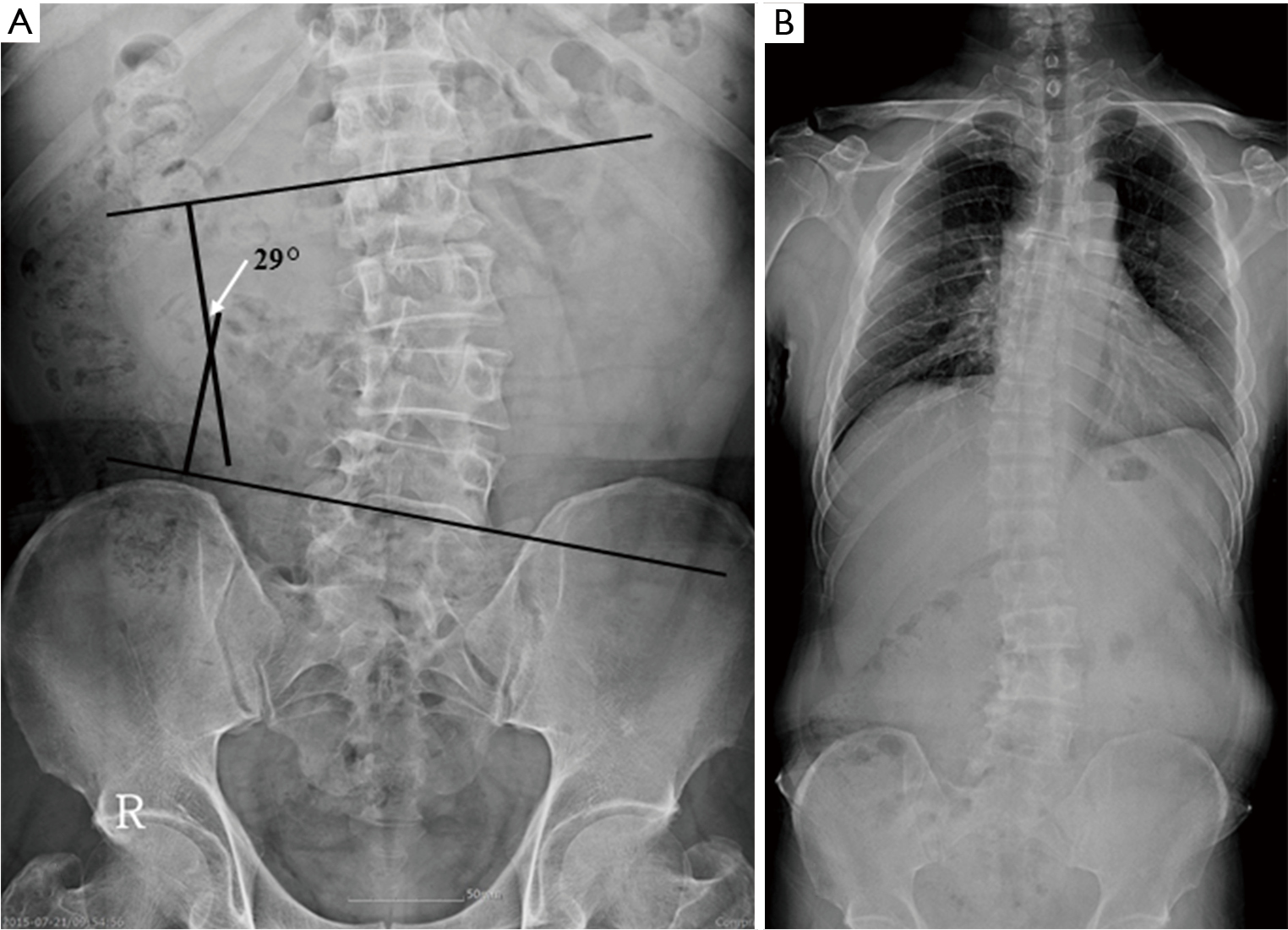 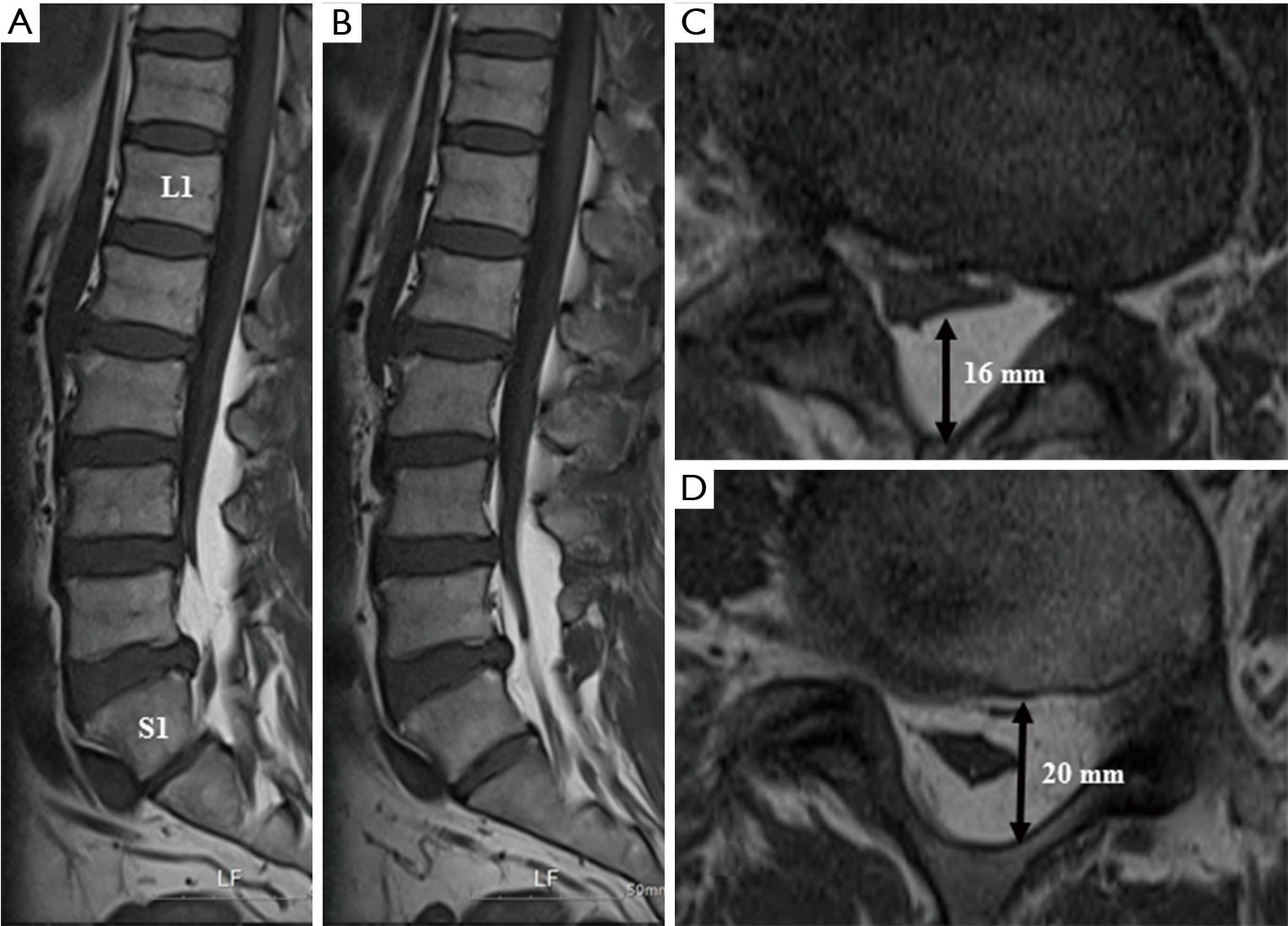 We searched for etiologies of SEL. The patient had no history of steroid use, epidural steroid injections, no medical co-morbidities and taking no regular medication. A body mass index (BMI) of the patient was 29.5 kg/m2 which meant a slightly obese condition. The patient didn’t have neurological deficits except back pain and scoliosis. Therefore, we decided that the patient was treated with regular medications (limaprost and ginkgo) and closely observed.

During the follow-up period, his symptoms were much improved. Six months after initiation of medications, follow-up lumbar computed tomography (CT) showed no interval change of prominent epidural fat deposit and scoliosis (Figure 3).

Mechanisms of SEL are still unclear (5). Increase of SEL incidence has been attributed to exogenous steroid use, endocrine disease, growing prevalence of obesity, and improvement in diagnostic techniques (4-6).

The typical MRI findings of SEL are the presence of a mass lesion on T1-weighted high-intensity and T2-weighted low-or immediate-intensity imaging (4,6). Advanced SEL can appear as a small oval or letter Y-shaped compression in the axial slice of the MRI that is commonly referred to as the stellate sign, or the “Y” sign (4,6). There must be greater than 7 or 8 mm thickness of adipose tissue to have a diagnosis of SEL (3,6). In this case, thickness of adipose tissue, L4/5 level is 16mm and L5/S1 level is 20 mm.

The treatment of SEL includes conservative management and surgery (6). Weight loss or steroid reduction is recommended if SEL is associated with obesity or exogenous steroid use (6). In cases where neurological deficits are present, symptoms are rapidly progressive, or conservative therapies fail, surgical decompression has been shown to prevent further exacerbation and produce improvements in symptoms (4-6).

Spinal stenosis due to SEL was the main issue in this patient. Improving blood flow and increasing microcirculation in lumbar neural tissue are helpful in relieving the patient’s symptoms. Therefore, we decided that the patient be treated with a combination therapy (limaprost and ginkgo).

SEL with scoliosis is a very rare entity (3). A literature search revealed only two cases of SEL associated with scoliosis (3,9). They are summarized in Table 1. In this case, idiopathic SEL was incidentally found in the patient with back pain and lumbar scoliosis. We didn’t find any risk factors of SEL except mildly increased BMI.

We report the case of a patient with scoliosis caused by idiopathic SEL. The patient was successfully managed with conservative treatment.

Conflicts of Interest: The author has no conflicts of interest to declare.