For the past decades, immobilization of the spine has been a cornerstone in spinal injury management and trauma patients (1). The rationale underlying such an approach is that spinal injuries are not uncommon in the trauma setting, and thus immobilization of the spinal column will prevent or minimize further pathological damage to the spinal cord by vertebrae (2). However, there have been reports of neurologic deterioration occurring after the initial trauma, such as during transit or early management, ranging from 3–25% (1,3,4). As such, despite the common dogma and recommendations of spinal immobilization in the trauma setting, there is still controversy and a lack of high-powered clinical evidence to support these measures (5-9). Traumatic spinal column injuries generally occur over multiple vertebral levels. Prior to ruling out injury, to minimize further risk of damage, complete spinal immobilization has been recommended.

In the context of a suspected cervical spine injury, patients are immobilized in a “neutral position” based on the head and trunk resting on a flat surface (10,11). In the authors’ experience in a spinal injuries unit, elderly patients often have their cervical spine immobilized in an inappropriately over-extended position. This can lead to incorrect orthosis fitting, which may result in fracture displacement or exacerbated neurological injury (Figure 1). 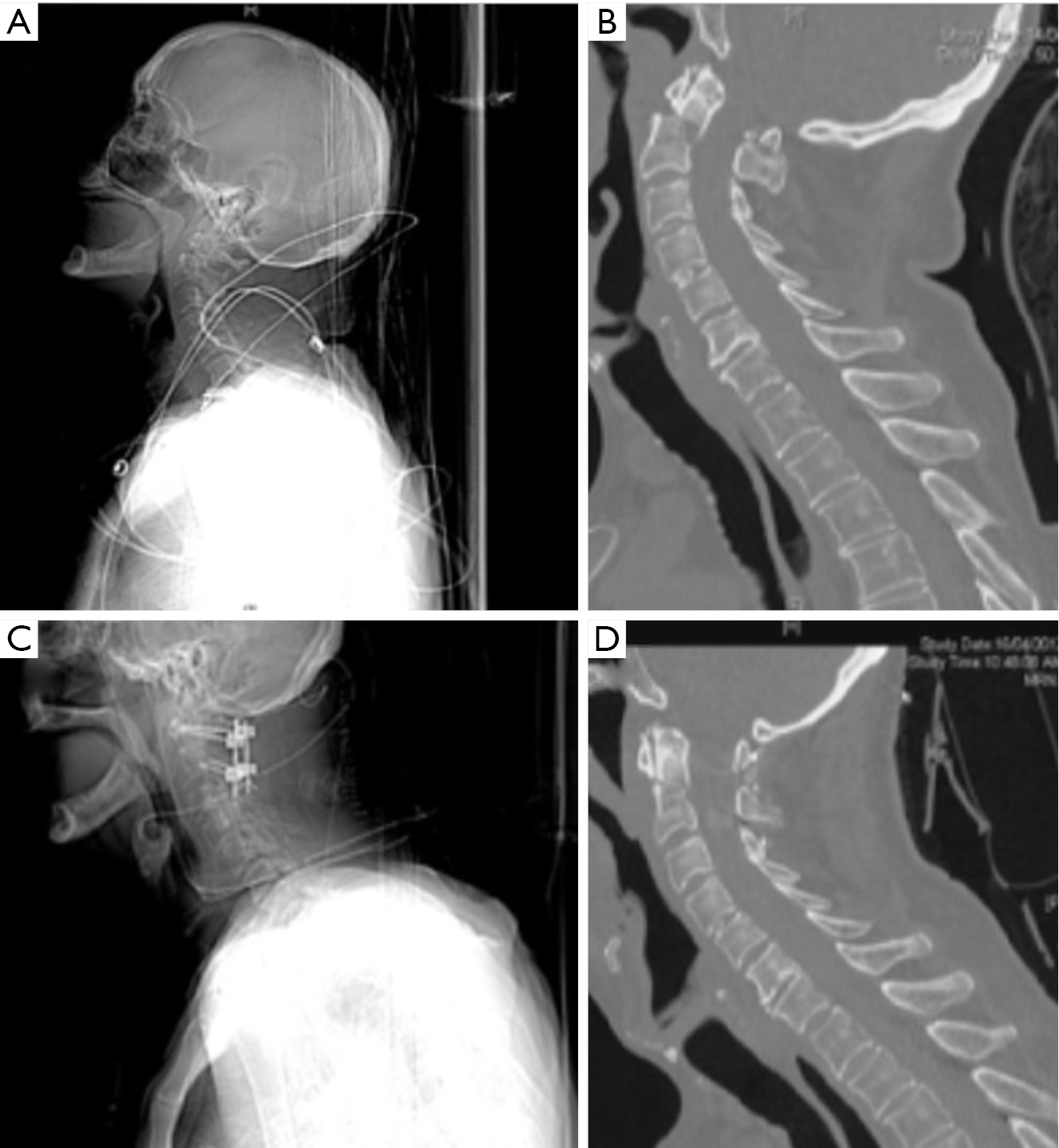 Figure 1 An example of how over extension of neck can result in worsening of the fracture displacement. (A) Preoperative CT scout film showing extended position of the C-spine with the gaze pointing upwards; (B) cervical spine CT sagittal midline image showing posterior displacement and angulation of the C2 fracture fragment in this position; (C) postoperative CT scout film showing slightly kyphosed chin-brow horizontal angle but a nearly horizontal gaze; (D) postoperative cervical spine CT sagittal midline image showing reduction of the fracture displacement in this position.

It is hypothesized that the increased thoracic kyphosis and cervical hyperlordosis seen in elderly patients may require alternative cervical immobilization, compared with the standard “neutral” position. Therefore, the aim of the present study was to assess the morphology of the cervical spine in elderly patients presenting to a trauma spinal injuries unit at a major Australian tertiary institution. 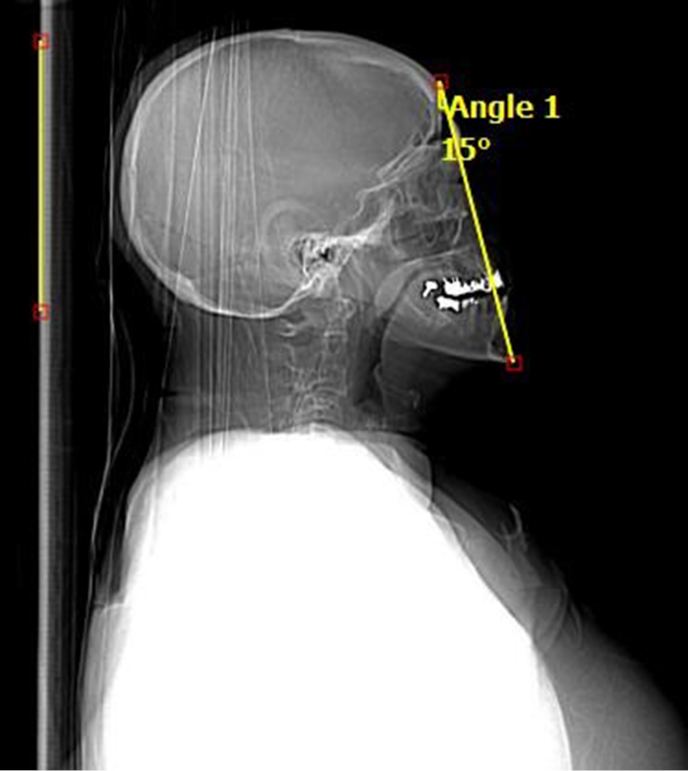 Figure 2 Measurement of chin-brow horizontal angle on a scout film of the trauma series CT scan. This is a normal lordotic cervical spine. CT, computed tomography.

Interobserver reproducibility was calculated with a 95% confidence interval (CI). Correlations between measurements and between observers were evaluated by interclass correlation (ICC). An ICC of >0.75 was accepted as evidence of excellent agreement and a confirmation of measurement reliability. Statistical analysis was performed using SPSS, with data expressed in mean ± standard deviation (SD).

During the 6-month period, 58 patients were identified, including 30 males and 28 females, with an average age of 77.6 years (range, 65–97 years). The chin-brow angles varied widely from +15.8 degrees in flexion to −30.5 degrees in extension, with mean ‘chin-brow horizontal’ angle of −12.4 degrees in extension (SD: 9.31 degrees). The distribution of the patient age and ‘chin-brow horizontal’ angles are shown in Figure 3. The interobserver ICC was determined to be 0.997 (95% CI: 0.995–0.998). Examples of hyperlordotic and kyphotic cervical spines are shown in Figure 4. 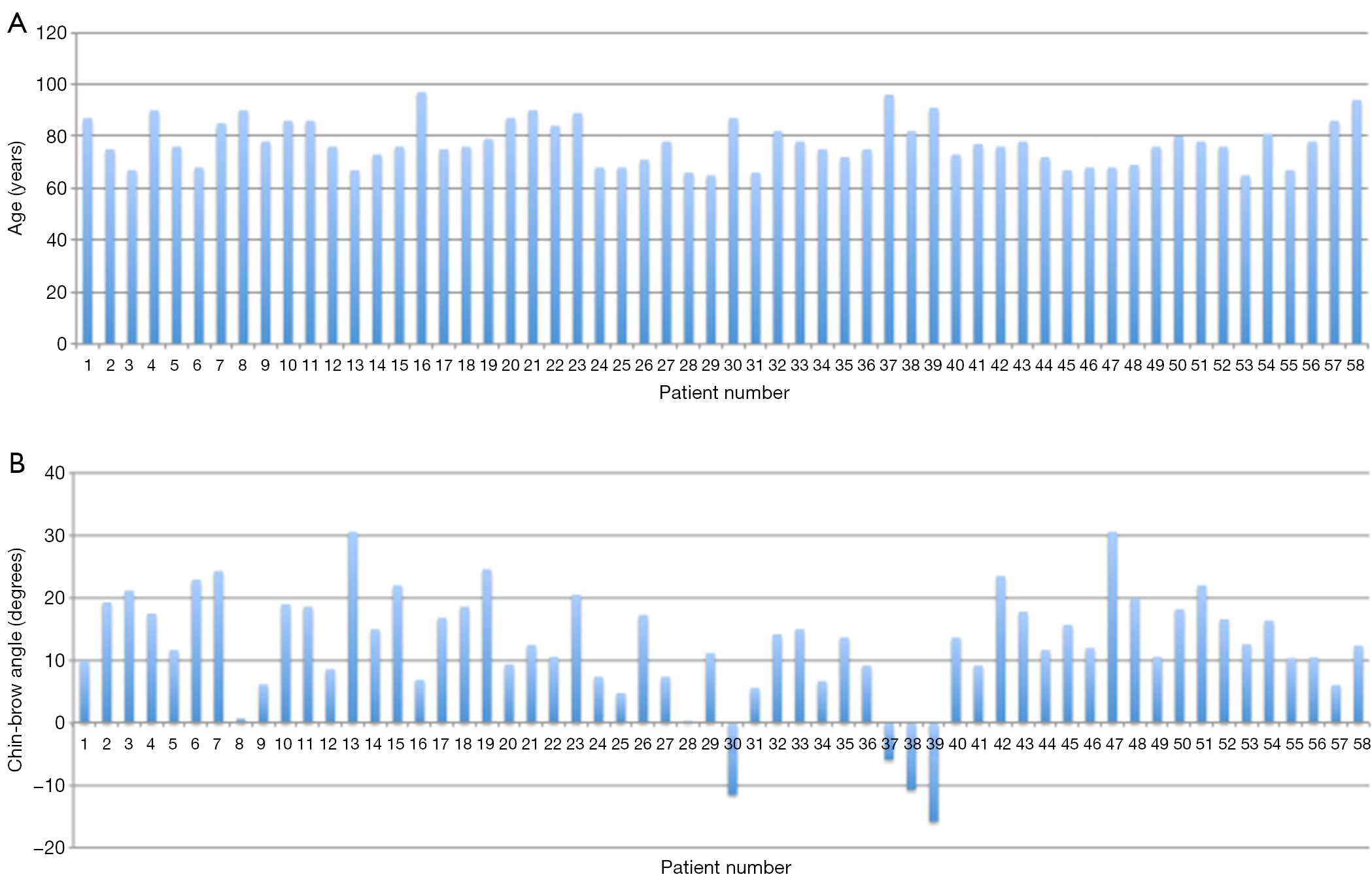 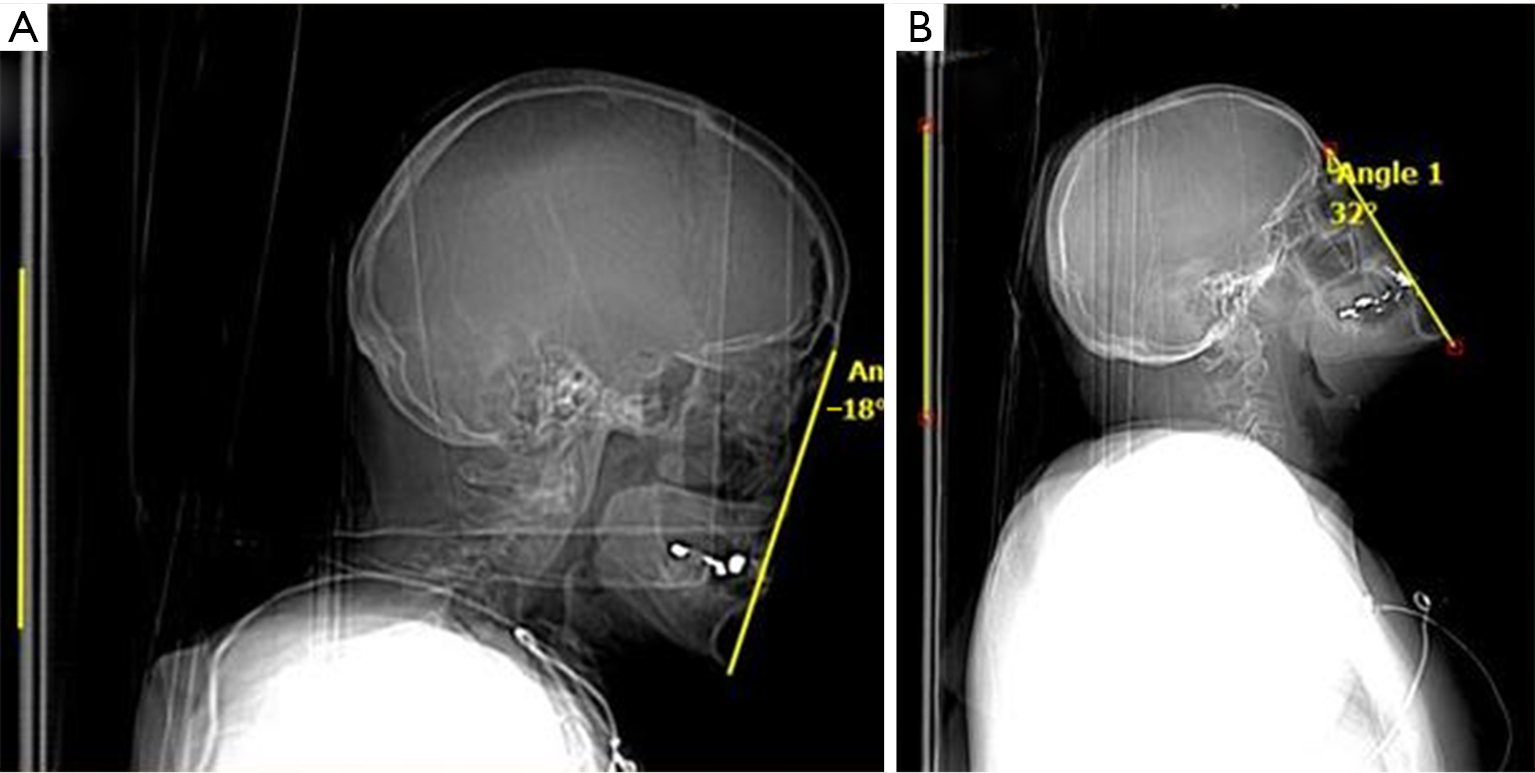 Despite being a commonly performed procedure in the trauma setting, there is a lack of convincing level I and II evidence to support routine spinal immobilization. Spinal immobilization was introduced with the aim of minimizing or preventing further exacerbation to injuries to the cervical nerve roots or spinal cord (12-15). However, cervical spine immobilization also has its disadvantages, including patient discomfort, respiratory compromise due to strapping techniques, skin ulcerations, dysphagia, as well as cost of equipment and training of relevant personnel (16). It has also been suggested that cervical hard collars significantly increase intracranial pressure after head injury (17). Therefore, it is in the patient’s best interests for spinal immobilization to be delivered appropriately and optimally.

Traditionally, the cervical spine was immobilized in the “neutral position” on a flatboard. Prior studies have suggested that positioning a patient on a flatboard places patients on relative cervical extension (10). Trauma guidelines have recognized certain situations where the flat board neutral position is inappropriate. These include the young infant, where a disproportionately large head leads to relative flexion, or the shoulder padded football player, where the elevation of the trunk leads to relative neck extension. Appropriate strategies for ameliorating these effects have been proposed. The increasing incidence of traumatic injuries in the elderly should prompt closer examination of this population. We hypothesized that degenerative changes in the elderly population, particularly the development of excessive thoracic kyphosis would lead to excessive neck extension when positioned on a flatboard.

Another consideration is the injury pattern of elderly patients which may differ from a younger population. Elderly patients typically fall from a standing height, which may lead to injuries to the atlantoaxial complex, involving the dens of the axis and odontoid process (21). Such injuries typically occur following hyperextension of the neck and may lead to fractures and spinal deformities (22). Quick assessment of the chin-brow angles and the horizontal gaze of such patients may allow the healthcare professional to decide the optimal angle to immobilize the cervical spine in order to achieve the optimal neutral position. This may require an alteration in the design of the trauma flat board or design a ‘pillow’ to add to the flat board.

All the limitations of a retrospective study apply to this study. It is a pilot study and a study with larger population is needed. The cervical alignment is in a trauma setting on a flat board, and does not mimic the natural cervical spine alignment.

The study describes the use of a novel measurement, the ‘chin-brow horizontal’ angle in the assessment of spinal alignment in trauma. The results suggest that, in elderly patients, the “neutral position” adopted for cervical spine immobilization may not be appropriate. We suggest that consideration be taken in cervical spine immobilization, with patients assessed on an individual basis on their fracture morphology and on the forward gaze position to minimize the risk of fracture displacement and worsened neurological deficit.