Diffuse idiopathic skeletal hyperostosis (DISH) is, generally, an asymptomatic disorder characterized by ossification of the anterior longitudinal ligament, and fusion of at least four or more contiguous vertebral bodies (1).

We report an extremely rare case of a DISH patient with intervertebral pseudoarthrosis which developed severe lower back pain and intermittent claudication due to severe dynamic instability in the L4–5 intervertebral disc which was the only mobile segment between long-range fused vertebrae from C7 to L4 and fusion segment from L5 to the ilium. We describe the performed surgical treatment and a review of literature.

We present the following article in accordance with the CARE reporting checklist (available at http://dx.doi.org/10.21037/jss-20-578).

A 47-year-old female patient with a history of primary aldosteronism and severe obesity, height 149 cm and weight 102 kg (body mass index: 45.9 kg/m2), had a history of lower back pain for 17 years. She started taking oral analgesics to relieve pain at the age of 46. One year later she started to exhibit intermittent claudication and at the local hospital was diagnosed with L4–5 spinal canal stenosis and prescribed conservative treatment.

Six months later, her lower back pain suddenly intensified with no reported causes. She was urgently transported and admitted to the hospital. During examination, the patient was unable to move due to the pain. The patient had no fever nor lower limb weakness and the blood examination showed the white blood cell (WBC) count within normal range, but the C-reactive protein (CRP) level was slightly increased; 0.6 mg/dL. The plain X-ray images in standing (Figure 1A) and supine position (Figure 1B) showed significant instability at the L4–5 intervertebral space, destructive changes in the vertebral end plate, and osteosclerosis of the vertebral bodies. There was a large bony spur in anterior part of the vertebral body, but no bony bridge. Magnetic resonance imaging (MRI) showed low intensity changes in L4 and L5 on T1-weighted images (Figure 2A), and high intensity of L4–5 intervertebral space in the T2-weighted images (Figure 2B). Computed tomography (CT) images showed multiple fused vertebrae from C7 to L4, vacuum in the L4–5 intervertebral space, severe stenosis of the spinal canal (Figure 3A,B), and the left anterior sacroiliac joint was fused due to bony spur bridges (Figure 3C). In addition, the patient was negative for HLA B-27. 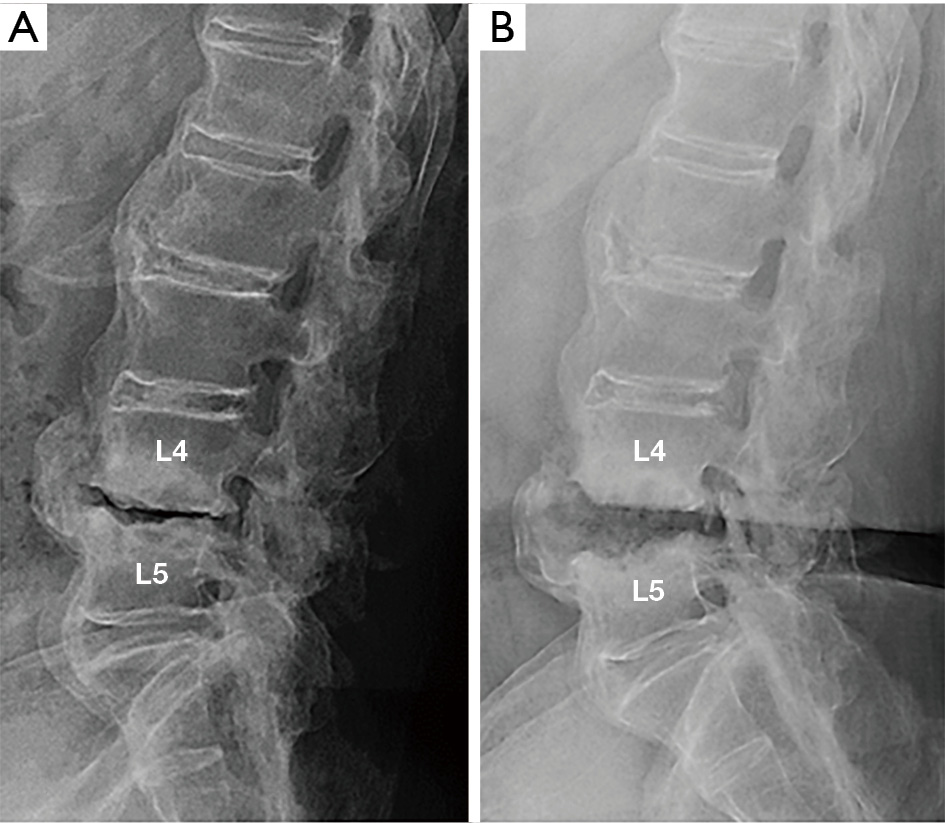 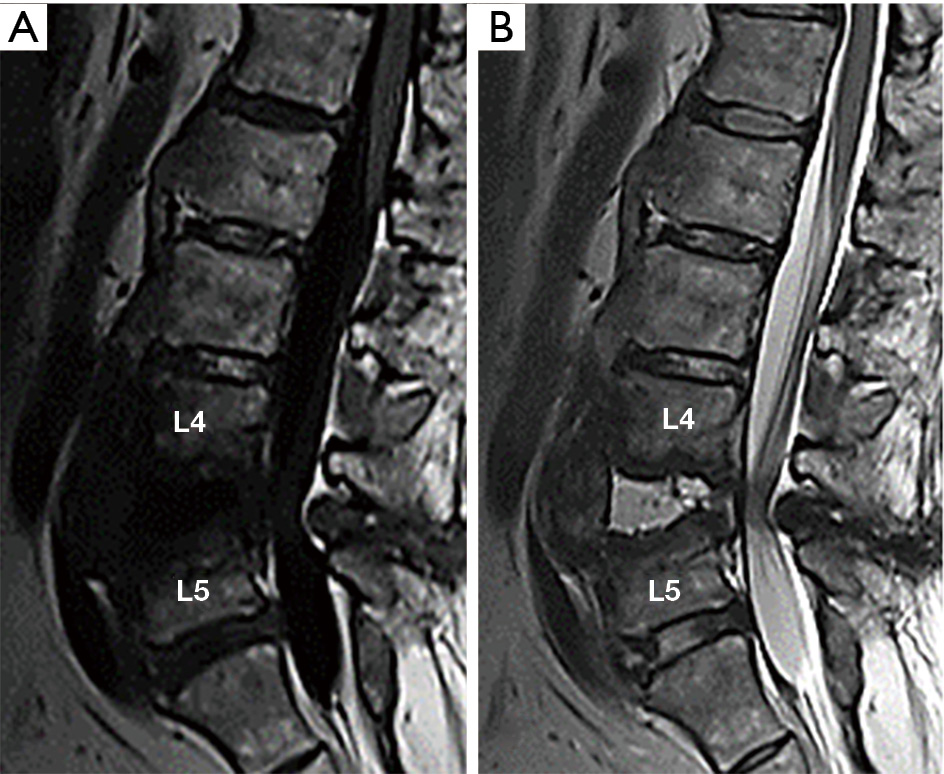 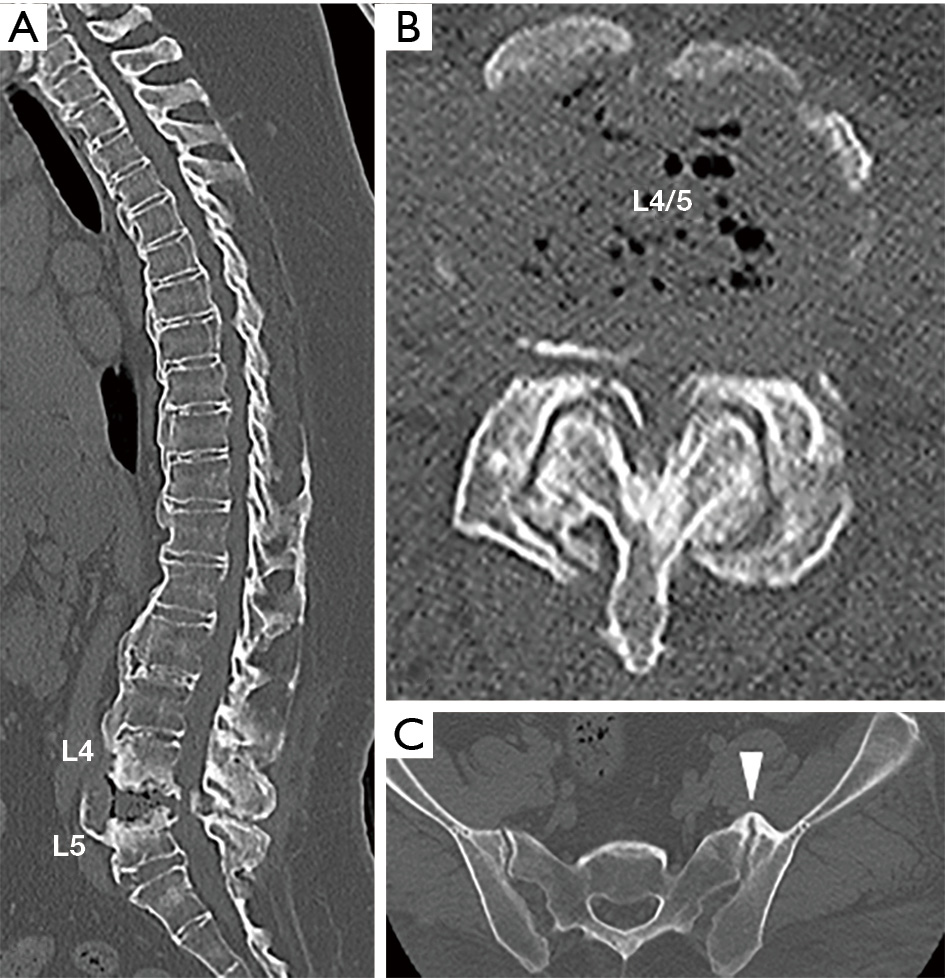 Due to suspicion of chronic pyogenic spondylitis, we performed full endoscopic lumbar discectomy to define the diagnosis. Pyogenic spondylitis was ruled out after the bacterial culture was negative and histopathological examination showed no inflammatory cell infiltration. The patient was diagnosed with L4/5 intervertebral pseudoarthrosis due to DISH accompanied by lumbar spinal canal stenosis.

After ruling out pyogenic spondylitis the patient was transferred to our hospital. Confirming the cause of intense lower back pain, we decided that spinal fusion would be the best option. For this reason, a two-stage 360° fusion surgery was carried out (Figure 4A,B). The first operation was a long-range posterior spinal fusion, from T10 to the ilium, followed by partial laminectomy of L4–5. Due to the obesity and deep surgical field, the patient had expected blood loss. For this reason, we inserted pedicle screws (RELINE®, NuVasive Inc., San Diego, CA, USA) from T10 to L3, through the fascia under C-arm fluoroscopy guidance, using the percutaneous pedicle screw technique. As it was not possible to determine the screw insertion points due to excessive hyperostosis of the facet joints, we inserted the screws using a navigation system (StealthStation® S8, Medtronic Inc., Minneapolis, MN, USA) at the caudal side, we used the sacral alar-iliac screw, which is the strongest pelvic anchor. As the lower lumbar vertebrae had variable screw insertion height due to excessive hyperostosis of the screw insertion position, we decided that free-hand rod bending would be difficult. Therefore, we employed computer-assisted rod bending system (Bendini®, NuVasive Inc.), which enabled smooth connection to the screw head. The operating time was 434 minutes, and the blood loss was 2,260 g. One week postoperatively lateral lumbar interbody fusion was performed as the second operation. A 14-mm height intervertebral cage (Coroent®, NuVasive Inc.) and a unidirectional porous β-tricalcium phosphate artificial bone graft blocks (Affinos®, Kuraray Co. Ltd., Tokyo, Japan) in the cage were used. The operating time was 95 minutes and blood loss was 122 g. 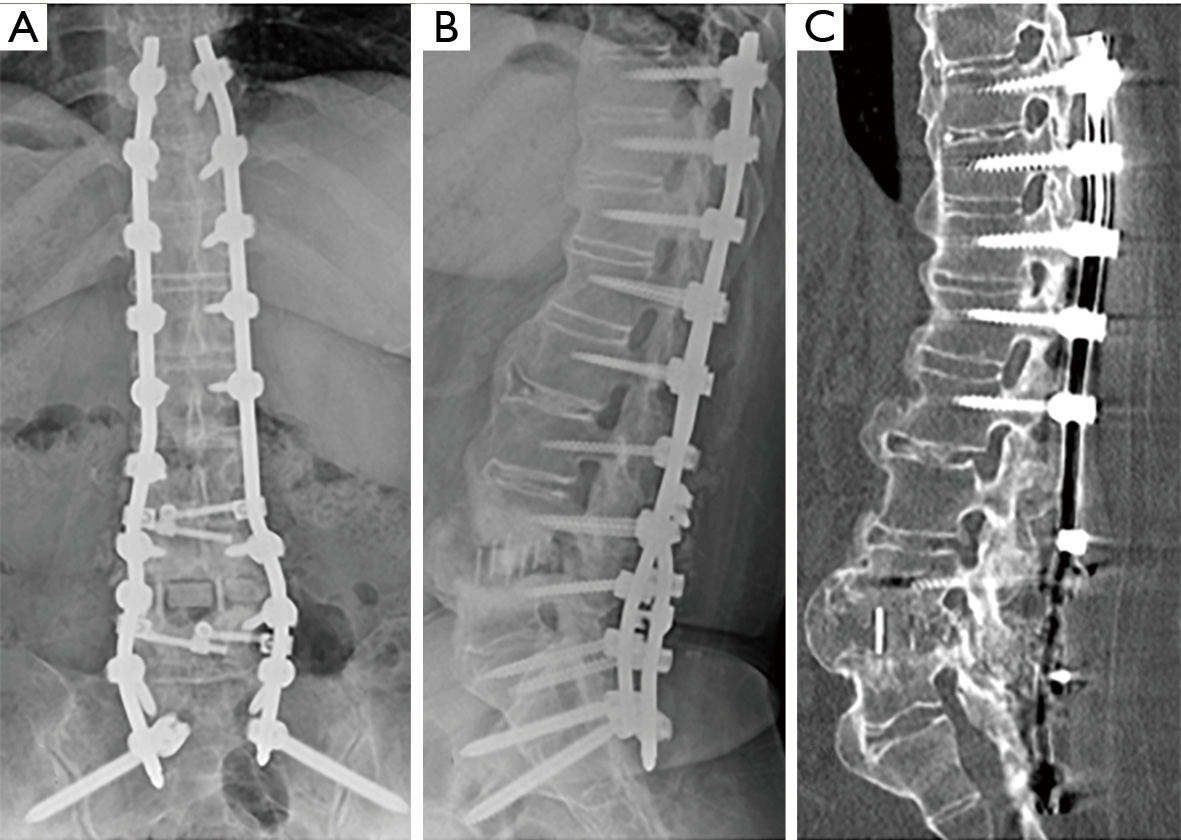 Figure 4 Images after surgery. A two-stage 360° fusion surgery was carried out. The first operation was a long-range posterior spinal fusion, from T10 to the ilium, followed by partial laminectomy of L4–5. One week postoperatively lateral lumbar interbody fusion was performed as the second operation (A,B). One and a half years after the surgery the L4–5 intervertebral fusion was completed by the anterior bony bridging and successful bone replacement of the β-TCP grafted in the intervertebral cage (C).

The lower back pain and intermittent claudication disappeared soon after the surgery and the patient experienced no complications. One and a half years after the surgery the L4–5 intervertebral fusion was completed by the anterior bony bridging and successful bone replacement of the β-TCP grafted in the intervertebral cage (Figure 4C). The patient was capable of walking without any assistance.

Written informed consent was obtained from the patient for publication of this study and any accompanying images. A copy of the written consent is available for review by the Editor-in-Chief of this journal.

Compared to the previous reports, the present case describes a younger patient, 47 years old, first case of female, and had the longest fusion due to DISH: from C7 to iliac bone across the unilateral sacroiliac joint. In the present case and previous reports laboratory examinations showed only mild elevation of inflammatory markers, such as WBC, erythrocyte sedimentation rate (ESR) and CRP. Findings on plain X-ray and CT scan, such as bone destruction of vertebral end plate and osteosclerosis of the vertebral body, and MRI scans, such as low intensity in vertebral bodies in the T1-weighted images and high intensity of intervertebral space in the T2-weighted images, are the same as ones seen in pyogenic spondylitis, which means that distinguishing these two conditions at an early stage is the most important factor. In the present case, we were able to differentiate the condition from pyogenic spondylitis by performing full endoscopic intervertebral biopsy for culture and pathological examination.

When comparing treatment approach of previous reports, with a fusion range of 4 to 8 vertebral bodies, our case had the longest DISH affected range and the patient required long-range fusion from T10 to the iliac bone in order to achieve adequate stabilization. The idea is comparable with the osteosynthesis of long bones. Moreover, the present case is the first example of choosing a lateral interbody fusion, which provides even more robust consolidation. Although posterior interbody fusion was the method of choice in previous reports, the present patient, with significant intervertebral body instability, had extremely severe degeneration of the L4–5 intervertebral disc and the operating field would have been very deep due to the obesity. It would be very difficult to perform the surgical manipulations required for posterior interbody fusion. In contrast, lateral interbody fusion, which has been performed increasingly in recent years, is less invasive procedure and allows direct approach to the intervertebral space. It is less complicated and, therefore, was useful in the present case. Even though the long-term prognosis remains unknown, we believe that 360° fusion is a surgical technique that can be considered for this condition.

Reporting Checklist: The authors have completed the CARE reporting checklist. Available at http://dx.doi.org/10.21037/jss-20-578

Conflicts of Interest: All authors have completed the ICMJE uniform disclosure form (available at http://dx.doi.org/10.21037/jss-20-578). TF and MY receive a joint research grant from Kuraray, Co., Ltd. The other authors have no conflicts of interest to declare.

Ethical Statement: The authors are accountable for all aspects of the work in ensuring that questions related to the accuracy or integrity of any part of the work are appropriately investigated and resolved. All procedures performed in studies involving human participants were in accordance with the ethical standards of the institutional and/or national research committee(s) and with the Helsinki Declaration (as revised in 2013). Written informed consent was obtained from the patient for publication of this study and any accompanying images. A copy of the written consent is available for review by the Editor-in-Chief of this journal.