These are benign, slow-growing and indolent tumors which often become large prior to clinical presentation.

Microsurgical resection is the treatment of choice for the majority of these lesions as it can lead to cure with total removal and favorable histological grading.

Surgical management of FFM represents a challenge, even for the experienced neurosurgeon, because of anatomical complexity of the area and the close relationship to brainstem, vertebral arteries and lower cranial nerves.

FLa and ELa are technically challenging and not as familiar to many surgeons. Furthermore, lateral bony exposure increases the chances of vertebral artery and lower cranial nerves injuries, in addition to requiring some degree of drilling of the occipital condyle to ensure an optimal surgical corridor, which can lead to instability of the occipitocervical (OC) junction and need for subsequent OC fusion (4-6).

In this report, we present our series of patients with dorsal, ventral and ventrolateral FMMs, treated by conven­tional posterior approach.

The aim of the Authors is to evaluate the efficacy of this surgical technique in removal of FMMs, using microscope magnification, ultrasonic aspirator and intraoperative neurophysiological monitoring.

In particular, we evaluated the feasibility of complete tumor removal, preservation of surrounding important anatomical structures and need for increased exposure.

From November 2004 to November 2015, we treated 14 patients with FMM at the Department of Neurosurgery of the Santa Maria delle Grazie Hospital in Pozzuoli, Naples, Italy. There were 10 females and 4 males, with a mean age of 64.5 years (range, 55–77 years). All patients underwent high field magnetic resonance imaging (MRI) with contrast enhancement preoperatively, which led to the radiological diagnosis. Computed tomography (CT) scans were done on postoperative day (POD) 1 and every patient underwent a follow-up MRI 30 days after the surgical intervention.

The most common presentation was neck pain refractory to medical management and requiring further investigation in 11 patients. Two patients presented with neck pain radiating to right arm in one and to left arm in the other, both associated with diffuse paresthesia and lower limbs weakness with 3/5 strength, whilst 1 patient had bilateral cervicobrachialgia with difficulty in “grasping” and had difficulty walking [modified Rankin Scale (mRS) 4/5] (Table 1). 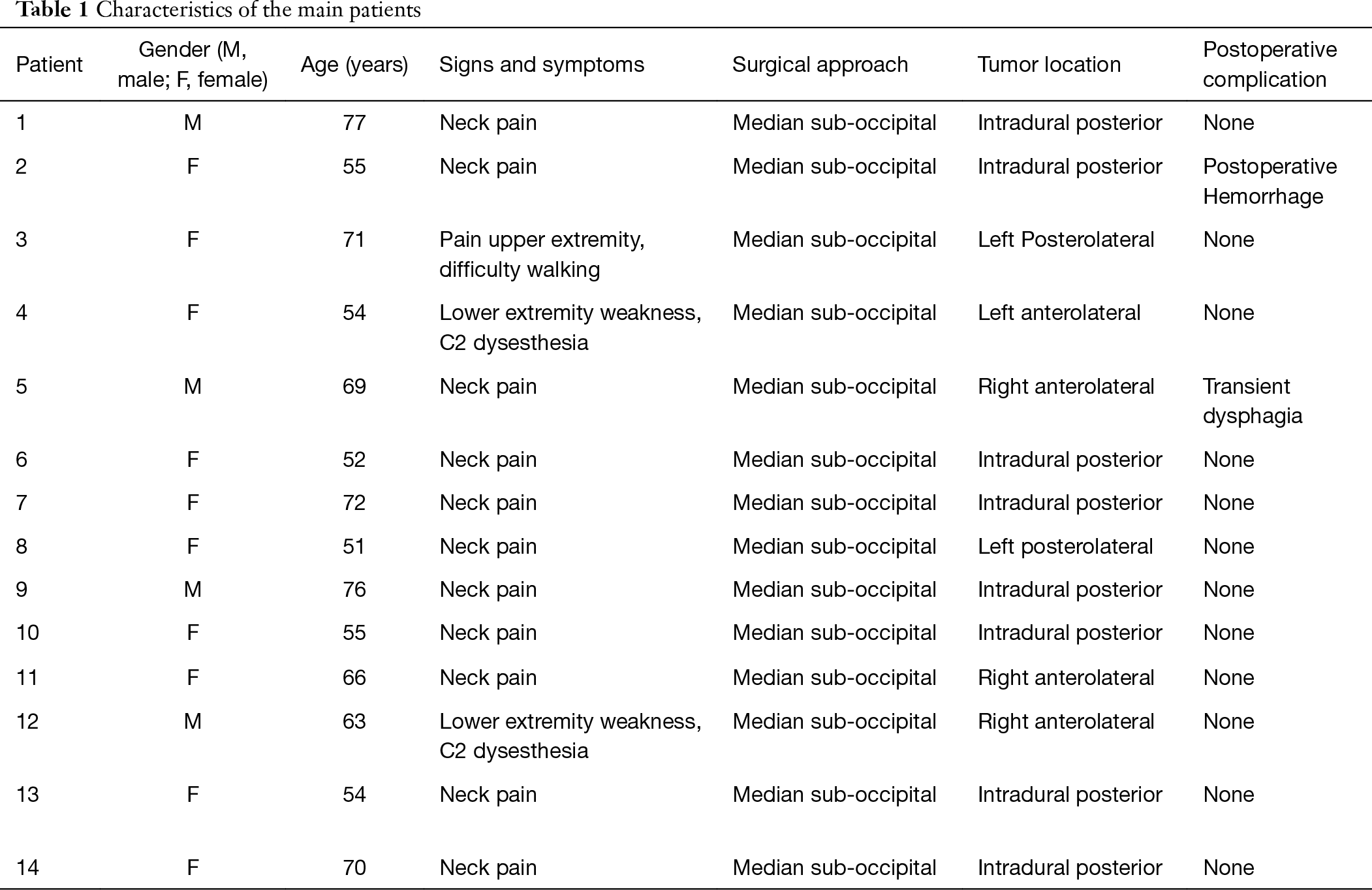 Six patients harbored an anterior FMM with lateral extension while 8 were affected by a purely posteriorly located meningioma.

All patients were approached via a median sub-occipital craniotomy for which they were placed in a “concorde” position.

In all patients, continuous neurophysiological monitoring was used, including sensory evoked potential (SEP) and motor evoked potential (MEP). In all cases, there were no alterations in either signal modality, except in one case where the amplitude of MEPs decreased more than 50% leading to a temporary stop in the surgery, with return of the signal after a few minutes following irrigation with warm ringer solution and increase in blood pressure (BP) (7-9).

A sub-occipital craniotomy as well as the removal of the posterior arch of C1 was performed in all patients. Partial removal of C2 was necessary in 2 patients with preservation of muscle attachments. 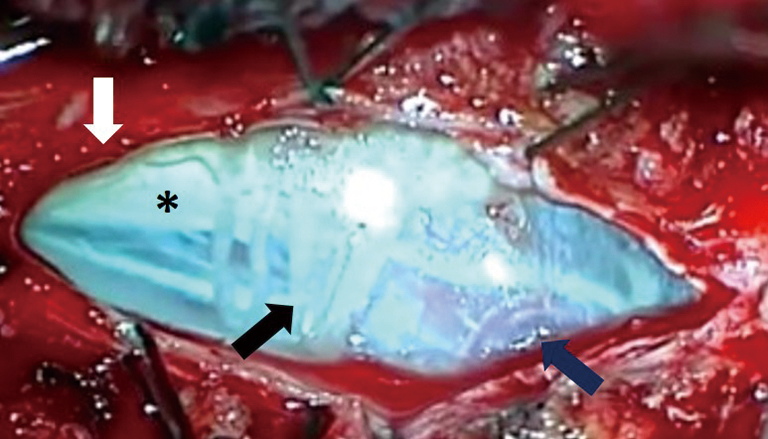 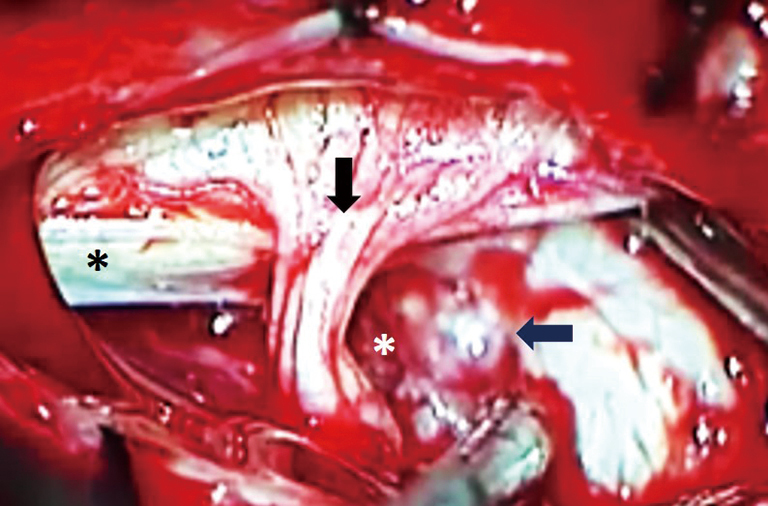 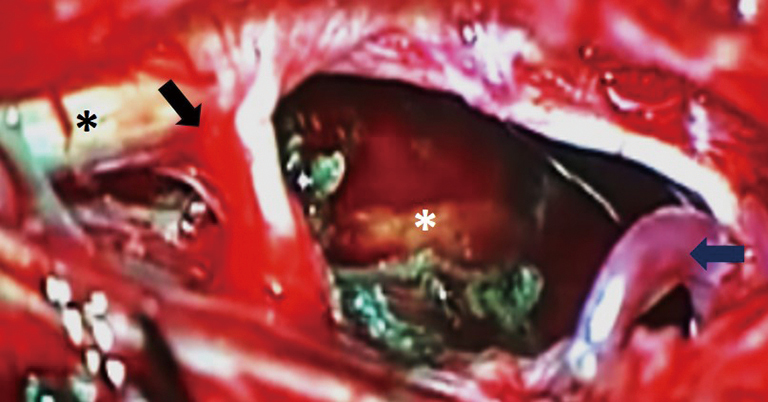 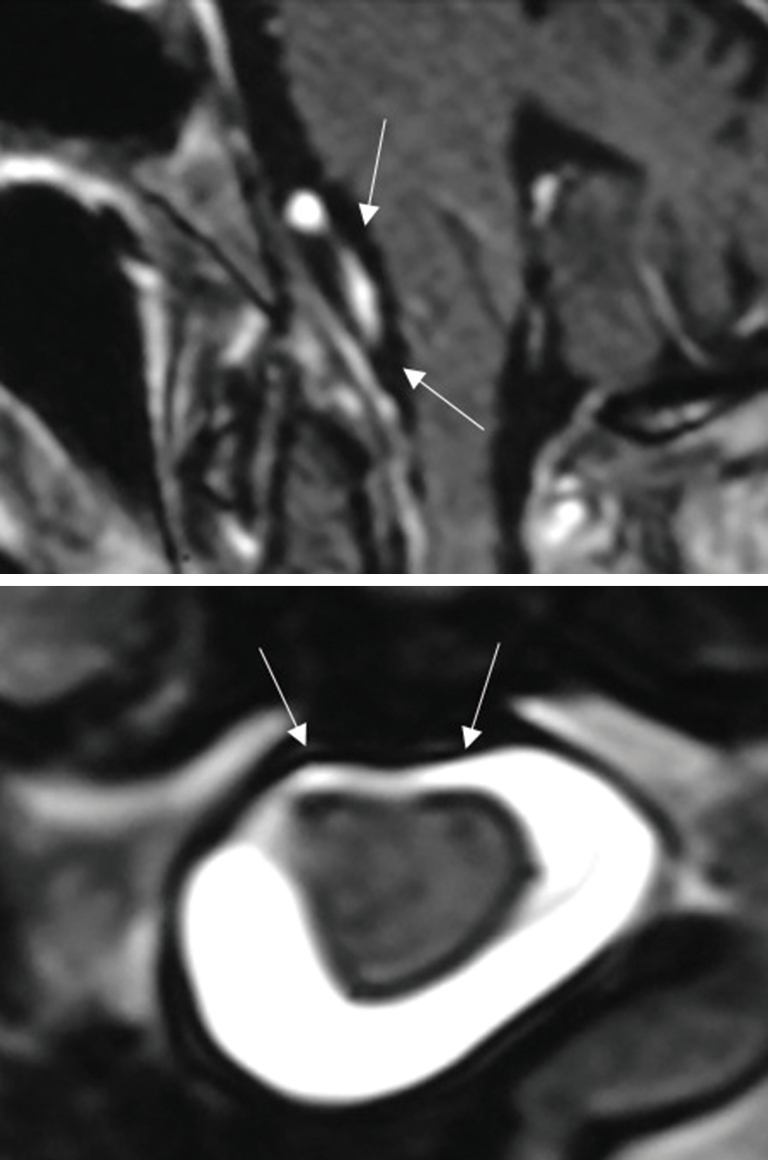 With this approach, there was no need to identify vertebral artery before it pierces the atlanto-occipital membrane.

For ventral and ventrolateral FMM lateral tilting of the surgical table and inclination of the microscope allowed for identification of a plane between the meningioma and the anterolateral aspect of the spinal cord and brainstem. Cutting of the dentate ligament permitted dorsal rotation of nervous structures, widening the working space without injuries to the cervical cord or exiting nerve roots.

Limits of the working area, after dural opening, were the inferior aspect of C1 root and above the vertebral artery and lower cranial nerves. A complete removal of the lesion was obtained in all cases through a progressive debulking of the lesion.

In posterior FMMs, the most important technical point was the identification of a plane between the lesion, the cerebellum and the upper part of the spinal cord.

The cerebellum, at times, might be edematous causing the lesion to further stretch the nearby structures, so caution is necessary to prevent avulsion of feeders to the lesion and en passant vessels during the dissection.

Thirty days after surgery pain and dysesthesia decreased in all patients in which these symptoms were present. A progressive neurological improvement was observed in the 2 patients affected by weakness in the lower limbs, with improvement of mRS scores to 2/5 from an initial mRS of 3/5 at 6 months follow up. Paraparesis was unchanged in 1 patient probably because longstanding preoperative compression of upper spinal cord by the tumor.

We observed no postoperative mortality. There was 1 major intraoperative complication due to acute cerebellar edema leading to profuse bleeding, eventually controlled (Figures 6-8). Perioperative complications included 1 patient (Patient 2) that presented neurological deterioration on POD 4 with progressive tetraparesis and loss of consciousness secondary to a hematoma in the surgical cavity which required surgical evacuation and a subsequent ventriculoperitoneal shunt for obstructive hydrocephalus. The patient experienced a slow but steady improvement of their weakness with complete recovery in 24 months to a mRS score of 3/5. Three patients suffered transient postoperative dysphagia. 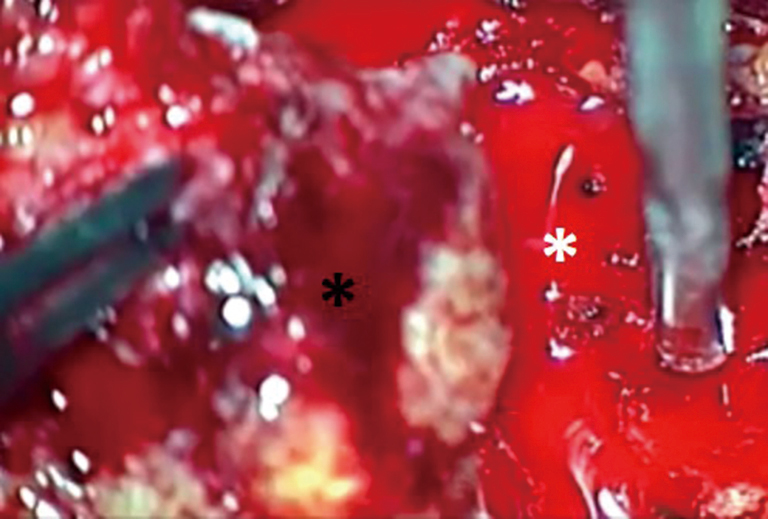 Duration of hospitalization was 10 days on average, except for the patient affected by postoperative hemorrhage that had a prolonged stay in ICU.

Histological examination showed that all lesions were World Health Organization (WHO) grade 1 meningiomas of the meningothelial type in 4 cases, psammomatous in 5 cases, angiomatous in 4 cases and transitional in 1 case. There were no WHO grade II or III meningiomas in our series. No patients were lost at the follow-up ( Table 2) . 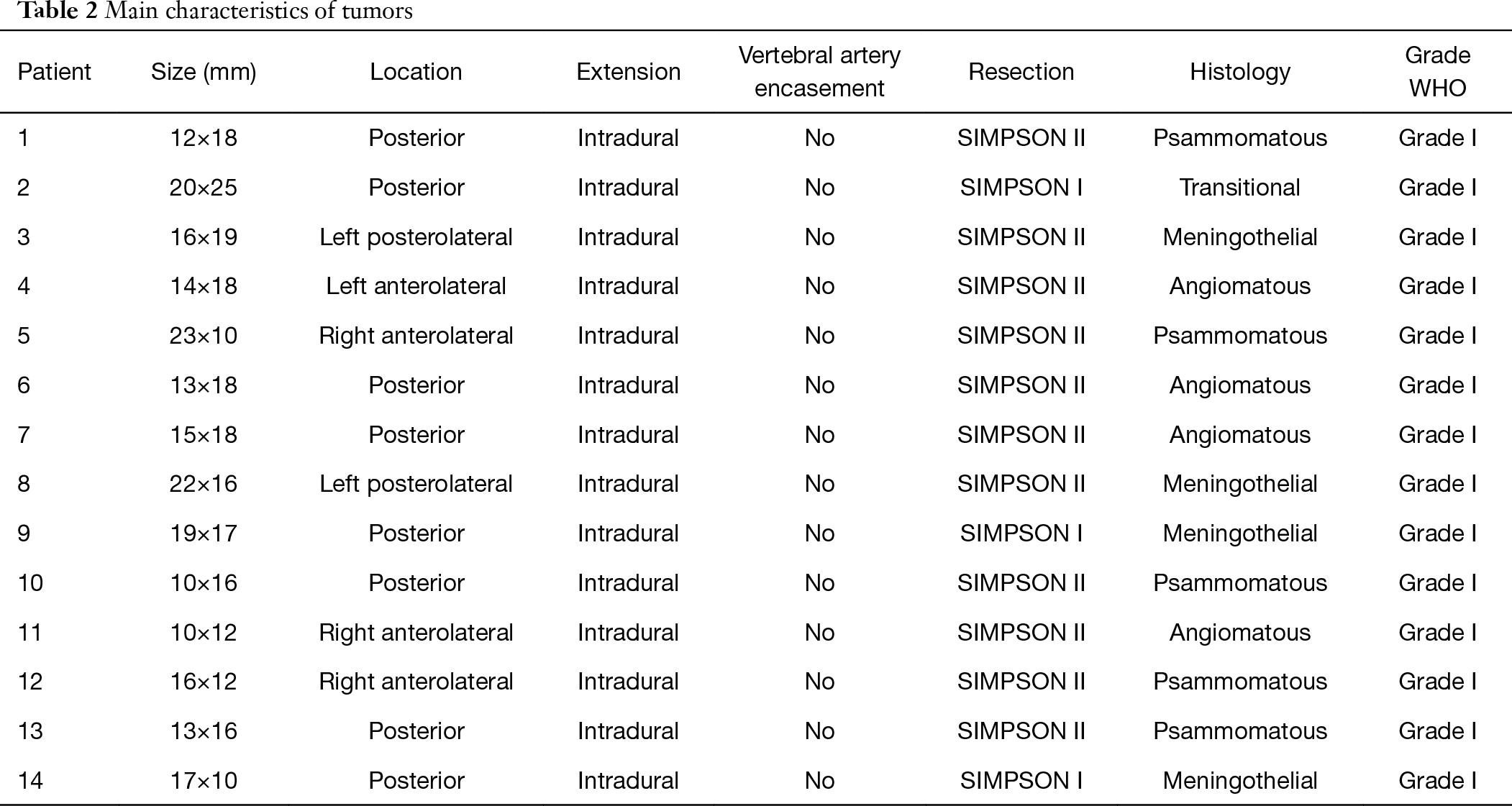 FMMs still represent a surgical challenge, despite the recent technical advancements (1,3,6). Extreme lateral approach, far lateral approach and sub-occipital craniotomy are the most common surgical approaches adopted for the excision of such lesions (1-3). Far lateral and extreme-lateral procedures have a steep learning curve and should be carried out by expert neurosurgeons, because of anatomical complexity of the surgical site, the close relationship to important structures like brainstem and upper spinal cord furthermore lateral bony removal increased risk of lower cranial nerves vertebral arteries lesions (1,4,10,11).

The aim of these approaches is to obtain a lateral view of the spinal cord, the brain stem and the interface between these structures and the tumor.

In his series, George comments that these surgical corridors are to be developed for anterior and anterolateral meningiomas, while, in recent papers, Della Puppa and Sohn (10-12), reported the use of a traditional sub-occipital approach to treat this lesions.

In our experience, a critical review of the pre-operative MRI allows for the study of the interface between the tumor and surrounding nervous structures the presence of a clear plane between the tumor and ventral surface of brain stem and spinal cord, necessary for the choice of a suboccipital route. If a virtual plane of dissection can be appreciated, the choice of this approach with removal of posterior arch of the atlas is enough in most cases to develop an adequate surgical corridor.

In our experience the utilization of the “concorde” prone position, a wide sub-occipital craniotomy with removal of the posterior arch of the atlas, with subsequent wide opening of the dura mater, permits a large fenestration of cisterna magna, with cerebrospinal fluid (CSF) removal and cerebellar relaxation. This strategy reduces the venous obstruction caused by the space occupying lesion and allows for comfortable manipulation of vessels and tissues.

For anterolateral lesions, once the dura is opened, the first step is to cut the dentate ligament. In this way, the medulla oblongata and spinal cord gently and spontaneously increase the space between the lesion and the surrounding structures.

It has been reported that C1 root is often displaced dorsally by the tumor several times needs to be sacrificed. In our experience that has not been the case as we found it can be gently dissected by the tumoral capsule and spared in all cases (Table 2).

The lower cranial nerves are frequently observed on the upper pole of the tumor, not encased and can be safely dissected from the meningioma after an initial debulking.

The vertebral artery (VA), in our experience, was never encased by the tumor. Encasement of vertebral artery should be carefully evaluated on the pre-operative MRI to avoid unexpected surprises and minimize the risk of injuries. In cases where VA is encased by the tumor, a far lateral approach should be considered to identify the extradural portion (V3 segment) and follow it as it pierces the atlanto-occipital membrane to obtain proximal control, should it be required.

The use of lateral tilt of the operating table and extreme lateral positioning of the surgical microscope can improve the visualization and improve surgeon’s ergonomics as well as facilitate removal of the lesion in a piecemeal fashion and coagulation of dural implant.

Scienza suggests a “clove” technique to remove the most proximal part of the tumor, splitting the lesion and expose adjacent tumoral dural attachment that can, thus, be easily coagulated and sectioned. The remainder deafferented “clove” is then removed. As the resection proceeds, the working space increases progressively because the brainstem remains naturally displaced even without retraction (10,11).

In our experience this was possible in 5 cases. All patients affected by anteriorly located meningiomas were complication free, and at 2-year follow-up no recurrence was observed, despite of in all cases we reached only a Simpson grade II resection. This appears to be sufficient per previous reports (13,14). In our series there are not cases of tumoral recurrence (Table 2).

We observed worsening of pre-operative neurological conditions in two cases with temporary dysphagia in one and transitory quadriplegia completely resolved at the 2-year follow-up.

The largest series of patients is reported by George. In his report of 107 cases gross total removal was obtained in 94% of patients. Subtotal removal was the result of surgery in recurrent cases and in patients affected by FMMs with extradural invasion. In his series, worsening of neurological condition is reported in 7.5%. In our experience, with limitation to a few cases, we report two complications (1,5,15).

In our opinion posterior located FMMs behave differently from other lesions located anteriorly. Often these meningiomas generate edema of neural surrounding structures, in our series we report one case of dorsally located meningioma approached by common sub-occipital craniectomy with an intraoperative complication due to cerebellar edema. In the post-operative period this patients developed hydrocephalus and underwent urgent ETV. After failure of this procedure a ventriculo-peritoneal shunt was implanted. The 2 years follow-up patient is free of symptoms and MRI shows no recurrence.

In the contemporary era, the choice of surgical approaches reflects the recent technological improvements. Neurophysiological monitoring, advances in neuroimaging and versatile microscopes, come together to minimize disruption of bony structures and trauma to soft tissue, accelerating postoperative recovery. FMM surgery should be planned per this philosophy, reducing, when possible, the use of extensive skull base approaches minimizing access whilst maximizing safety and exposure.

Ethical Statement: Our study is a retrospective analysis of clinical records. An ethics approval was not required according to our guidelines. All patients gave informed consent for image publication.