Spondylodiscitis is an infection of the intervertebral disc that accompanies secondary osteomyelitis of the endplates of the vertebrae (1). It is an infection of the spine with a previously noted incidence of 0.4–2.4/100,000 per year although newer studies have claimed rates as high as 12/100,000 due to improved diagnostic methods (2,3). Common pathogens associated with spondylodiscitis include Staphylococcus species, Escherichia coli, Proteus, Klebsiella, Pseudomonas aeruginosa, and Mycobacterium tuberculosis with Staph aureus being the most common culprit (1). Gram negative bacteria are often seen in immunocompromised patients, diabetics, intravenous (IV) drug use, and procedures or infections of the genitourinary of gastrointestinal tracts. Endemic regions have higher presentations of spondylodiscitis due to tuberculosis (TB) which is also typical of patients who are immunosuppressed, prisoners, IV drug users, or homeless (3). Sequelae of spondylodiscitis include reduced mobility, instability, and compression of neural structures, often necessitating surgical intervention. Severity of this disease is primarily dependent on the infectious components of the disease as well as the origins in the viscera, such as cardiac or gastrointestinal organs. It is of vital importance to correctly identify the causative pathogen in the initial stages of infection to determine appropriate and prompt management. The most common manifestation of this condition is back and neck pain. Pain and dissemination of the neurological structures are principal effects of the degeneration of the vertebral motion segments, a phenomenon known as segmental instability. Abscesses may accompany this infection and are typically localized to either the spinal canal or track distally into the musculature of the pelvis.

Blood cultures and magnetic resonance imaging (MRI) remain the gold standard in diagnosing spondylodiscitis. However, blood cultures are often negative. Therefore, management of this disease has certainly posed difficulties, especially when caused by uncommon microbes. Spondylodiscitis secondary to non-tuberculous mycobacteria (NTM) is exceptionally rare, and no consensus exists regarding the optimum antibiotic regimen or treatment duration for spinal infections secondary to NTM. The patient of interest in this case is a 32-year-old male presenting with spondylodiscitis due to Mycobacterium chelonae (M. chelonae). We present the following case in accordance with the CARE reporting checklist (available at https://jss.amegroups.com/article/view/10.21037/jss-22-3/rc).

A 32-year-old male presented to the emergency department with a 3-month history of gradually progressing low back pain. Pain initially radiated down his posterolateral right leg with associated numbness and tingling. Five days prior to presentation to the emergency room, he began experiencing gradually progressive diffuse weakness, loss of bowel and bladder control, complete left-sided Bell’s palsy, and dysphagia. Patient had no underlying medical diseases beyond developmental delay. Vital signs were stable on presentation. Physical examination showed a thin, chronically malnourished patient. Musculoskeletal examination was significant for severe atrophy of bilateral lower extremities with the right side greater than left, limited lumbosacral extension, lumbar pain with extension, inability to ambulate secondary to pain, and diminished strength and sensation in the bilateral lower extremities. Rectal examination demonstrated significant loss of rectal tone, concerning of cauda equina. Examination was also significant for a newly developed sacral ulcer.

The patient was admitted to the hospital for further evaluation. Advanced imaging of the lumbosacral spine including computerized tomography (CT) and MRI, as seen in Figures 1–4, showed bone destruction and disc enhancement at the level of L5-S1, consistent with chronic spondylodiscitis. Imaging also showed severe compression of the spinal canal and bilateral neural foramina, adjacent phlegmonous changes in the epidural space with reactive enhancement surrounding the posterior elements of L5, increasing fluid within the intervertebral disc space, decreased size of epidural fluid collection superficial to the L5-S1 level, and a right psoas abscess measuring 2.3 cm × 1.2 cm. C-reactive protein (CRP) and sedimentation rate were elevated at 10.7 mg/L and 60 mm/h, respectively. Complete blood count (CBC) with differential was significant for a hemoglobin of 11.7 g/dL, hematocrit of 38.5%, 72.5% neutrophils, and 18.1% lymphocytes. Comprehensive metabolic panel (CMP) was within normal limits. 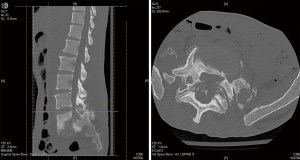 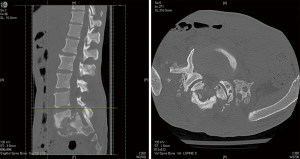 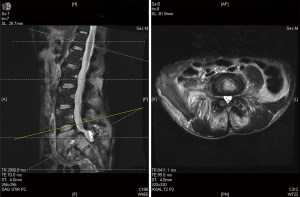 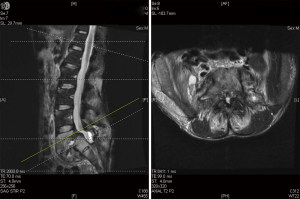 Within 24 h, the patient underwent L4-S1 decompression and fusion with left-sided iliac crest bone grafting, and intraoperative biopsy. Blood culture obtained on admission showed no growth after 42 days. Intraoperative tissue cultures grew Mycobacterium chelonae resistant to cefoxitin, imipenem, trimethoprim-sulfamethoxazole, and ciprofloxacin, with susceptibility to amikacin, doxycycline, linezolid, tobramycin, and clarithromycin. Microscopic imaging with acid fast staining of M. chelonae can be seen in Figure 5. The patient was initially treated with IV vancomycin and piperacillin-tazobactam. Per infectious disease recommendations, the patient was transitioned to a 6-week course of ceftriaxone, doxycycline, and rifampin. This provided empiric coverage for brucellosis, which was continued despite negative antigen due to the chronicity of his condition. The psoas abscess was drained percutaneously under computed tomography guidance, and cultures showed no growth. His immediate post-operative course showed gradual improvement with respect to his lower extremity symptoms. However, he continued to have severe dysphagia requiring percutaneous endoscopic gastrostomy (PEG) tube placement 1 week after surgery. The patient was discharged to a rehabilitation facility 9 days after admission.

Approximately 1 week after discharge, he developed significant fevers and a cough, and was found to have aspiration pneumonia. He was subsequently hospitalized for 3 weeks. During this time, he underwent irrigation and debridement of his sacral wound. His dysphagia improved during his hospitalization and he was transitioned to oral feeds. Following resolution of his symptoms, he was discharged to a rehabilitation facility on a 6-week course of amikacin, doxycycline, and clarithromycin.

Repeat CT-guided biopsy 8 months post-operatively showed no culture growth. MRI of his lumbosacral spine was repeated at 15 months post-operative which can be seen in Figures 6,7. It showed a considerable decrease in enhancement, edema and inflammatory changes of the disc and endplates. In addition, it showed multilevel disc desiccation, L3-L4 disc bulge with progressive central canal narrowing, as well as no epidural or compressing fluid collection. His 16-month post-operative visit showed significant improvement in overall strength, ability to ambulate at home with minimal assistance, full control over bowel and bladder function, and resolution of his lower back pain. He had been followed by infectious disease and underwent numerous transitions in antibiotic regimen secondary to adverse medication effects and non-compliance with oral agents. His antibiotic regimen at present consists of IV azithromycin and tigecycline, which is to be continued for a total course of 18 months. No evidence of neurological sequelae has been observed or reported during his 16 months follow-up period. 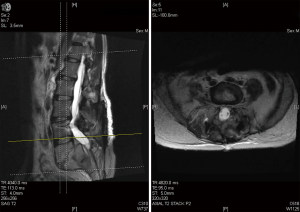 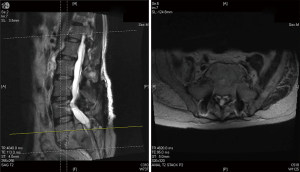 Patient was pleased with the outcome of both his surgery and final antibiotic regimen. Side effects of some antibiotics used were not pleasant, but he is happy with the end results. He returned to pre-infection level of activity and is caring for himself independently at home. His bowel and bladder control improved, and he endorsed improved global strength.

All procedures performed in this study were in accordance with the ethical standards of the institutional and/or national research committee(s) and with the Helsinki Declaration (as revised in 2013). Written informed consent was obtained from the patient for publication of this case report and accompanying images. A copy of the written consent is available for review by the editorial office of this journal.

Diagnosis of spondylodiscitis is challenging as the presenting symptoms are usually non-specific, which often results in delayed diagnosis. In general, diagnosis is based on radiological, clinical, laboratory, and microbiological findings (1). While plain radiographs are the first-line imaging for patients with non-specific symptoms, MRI remains the gold standard for detecting spondylodiscitis, and CT scans are reserved for those with contraindications to MRI. Laboratory testing includes blood testing for leukocyte count, CRP, and sedimentation rate. While acute infection often demonstrates elevated inflammatory markers, they may be within normal limits in chronic cases. CRP count and sedimentation rate are non-specific tests, although they may be used to follow response to antibiotic therapy (1). Microbiological testing is often initiated in the form of blood cultures. However, this is not reliable, as the pathogen is only identified in 25–59% of blood cultures (5). Further histopathological investigation can be achieved via CT-guided fine needle biopsy or surgical biopsy. Given the complexity involved in diagnosing spondylodiscitis and identifying the causative pathogen, delay of 2–12 weeks between diagnosis and treatment initiation is not uncommon (5).

The primary goals of treatment in spondylodiscitis include elimination of the infection, restoration of spinal functionality, and improvement of pain or other neurological symptoms (1). Identification of the causative pathogen and susceptibility testing guide the initiation of antibiotic treatment. Of note, first line M. tuberculosis drugs have no role in the treatment of M. chelonae. Clarithromycin appears to be the mainstay of therapy for rapidly growing mycobacterium (RGM) such as M. chelonae, though combination antimicrobial therapy is recommended due to inducible resistance to macrolides with monotherapy. Additional agents shown to have good in vitro activity against M. chelonae include linezolid, amikacin, tobramycin, imipenem, and tigecycline (6). Of note, limited clinical data exists regarding the use of tigecycline, and it is only recommended in the absence of other options (7). Several of these recommended agents were used in the treatment of our patient but due to several medication adverse effects and patient noncompliance, the final treatment regimen consisted of tigecycline and azithromycin. There is no consensus on the recommended duration of pharmacologic treatment for M. chelonae osteomyelitis, though it is recommended that patients receive at least 6–12 months of combination antimicrobial therapy (6).

Literature review identified only two other cases of localized vertebral osteomyelitis due to M. chelonae. One case report demonstrated a successful treatment with antimicrobial therapy and spinal instrumentation and fusion, similar to the operative management seen in our case. However, the patient’s treatment course was complicated by recurrent psoas abscesses and extensive antibiotic resistance requiring multiple surgical drainage procedures and antibiotic alterations over a 33-month period (8). Resolutions of symptoms occurred while using ciprofloxacin, clarithromycin, and amikacin which was eventually discontinued and replaced with doxycycline. Another study reported a case of M. chelonae vertebral osteomyelitis in a patient with a history of IV drug abuse and hepatitis C infection (6). Initial clinical improvement was seen following decompressive laminectomy of T7-T8, though this was later complicated by regression of neurologic status, which required fusion of T7-T10. Following this second operation, the patient only saw mild improvement in lower extremity strength. Specific antibiotic therapy used in this case is not stated. Final antibiotic therapy for our patient was azithromycin and tigecycline after tobramycin was discontinued due to ototoxicity. This differed from one of the cases mentioned above, which used a macrolide, tetracycline, and a fluroquinolone.

Reporting Checklist: The authors have completed the CARE reporting checklist. Available at https://jss.amegroups.com/article/view/10.21037/jss-22-3/rc

Conflicts of Interest: All authors have completed the ICMJE uniform disclosure form (available at https://jss.amegroups.com/article/view/10.21037/jss-22-3/coif). The authors have no conflicts of interest to declare.

Ethical Statement: The authors are accountable for all aspects of the work in ensuring that questions related to the accuracy or integrity of any part of the work are appropriately investigated and resolved. All procedures performed in this study were in accordance with the ethical standards of the institutional and/or national research committee(s) and with the Helsinki Declaration (as revised in 2013). Written informed consent was obtained from the patient for publication of this case report and accompanying images. A copy of the written consent is available for review by the editorial office of this journal.