We report a case, in accordance with the CARE reporting checklist (5), of postoperative spinal subdural hygroma in a patient who had initially underwent an uneventful posterior lumbar decompression without intraoperative durotomy, with development of spinal subdural hygroma during the early post-operative period. To our knowledge, this is the first case reporting a concurrent SSEH and subarachnoid hygroma (SSSH), both causing cauda equina nerve root compression which required surgical intervention.

We present the following case in accordance with the CARE reporting checklist (available at http://dx.doi.org/10.21037/jss-20-601).

All procedures performed in studies involving human participants were in accordance with the ethical standards of the institutional and/or national research committee(s) and with the Helsinki Declaration (as revised in 2013). Written informed consent was obtained from the patient.

A 63 years old lady, previously well housewife presented to our department with a 3 days history of acute lower back pain radiating down the left lower limb, on a background of known intermittent lower back pain with right sided sciatica symptoms with associated neurogenic claudication for more than a year. Patient was home ambulant without assistance but limited to short distance ambulation in the community due to neurogenic claudication. There was no prior history of trauma or heavy lifting, nor where there any constitutional symptoms. The patient also reported no urinary or bowel incontinence.

Neurological examination revealed that the power was 4/5 at the left L5 myotome with reduced sensation over bilateral S1 dermatomes. Lower limb reflexes were normal. MRI lumbar spine showed multi-level degenerative disco-vertebral and facet joint changes associated with severe bilateral L4/5 lateral recess stenosis (Figure 1), and less severe stenosis at the L3/4 level. Correlating the radiological and the clinical findings, the patient was counselled and underwent an uneventful microscopic bilateral L3/4 and L4/5 decompressive laminotomy, medial facetotomy and flavectomy. There was no dural breach during the surgery.

Her symptoms improved upon the first post-operative day and the patient started to ambulate with the physiotherapists. On the third post-operative day, however, the patient experienced recurrent left lower limb radicular symptom, localized to the left anterior thigh area. An urgent repeated MRI lumbar spine revealed a dorsal intradural fluid collection (hygroma) at L1 displacing the cauda equina nerve roots anteriorly (Figure 2A), and a ventral intradural hygroma with conglomeration of the cauda equina nerve roots residing centrally within the thecal sac at L2 (Figure 2B). Other MRI findings included enhancing granulation soft tissues seen at the surgical site, protruding into the posterior lumbar central spinal canal from L3-4 down to mid L5 level and causing central spinal canal and lateral recesses narrowing.

A decision was made to promptly to bring the patient back to the operating theatre for cauda equina decompression. It was first noted that an epidural organized haematoma over the L4/5 laminotomy site extending up to L3/4 level was present. A completion L3/4 decompression was done for adequate haematoma evacuation and examination of the thecal sac under the microscope revealed no dural tear or active CSF leakage.

Next, L1 laminectomy was performed followed by standard durotomy at this level. Intradural inspection revealed a large dorsal SSSH and a ventral extra-arachnoid hygroma (SSEH). Both of the hygromas were successfully drained through multiple wide fenestrations (Figure 3A,B,C). The durotomy was repaired primarily with 5/0 Prolene sutures and a sub-fascial drain was inserted left on passive suctioning.

The patient experienced immediate resolution of her symptoms after the 2nd operation. Surgical drain output was minimal and it was removed on post-operative day 2. The patient had an uneventful recovery and she was eventually discharged back home well. She was last seen by us at 4 months post-operatively, and reported good relief of the left lower limb radicular pain and some minor residual right sided symptoms.

The time-line of events for this reported case is attached at the end of this article (Figure 4). 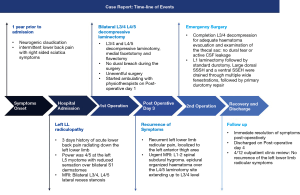 Figure 4 The time-lime of events for the reported case. Patient’s symptoms first started 1 year prior to the current admission. Patient was admitted exacerbation of lower limb radicular symptoms. First surgery, a two-level decompressive laminectomy was performed. Patient experienced recurrent lower limb symptoms on post-operative day 3. Emergency surgery with drainage of intradural hygromas was performed after urgent MRI evaluation. The symptoms resolved after the second operation. Patient was discharged home in stable condition, 4 days after the second operation. At 4 months’ clinic follow-up patient has remained stable with no new complaints or symptoms.

Spinal subdural hygromas are defined as accumulation of CSF within the space between the dura and arachnoid layers. Although subdural hygroma frequently associated with head injuries, it is a rare complication from cranial or spinal surgery (6). An unintentional durotomy can occur during spinal surgical procedures, resulting in formation of spinal subdural hygroma. Nottmeier et al. (1) have described that a ball-valve type phenomenon may have occurred at the sites of the inadvertent durotomies, leading to the development of the entrapped CSF collections seen as hygromas on scans. In our case, although no incidental dural tear was noted during the first operation, a small dural puncture could result from the residual sharp bony edges from the site of decompression. During the second operation we didn’t see any evidence of this however. Early arachnoiditis at the operated index level may result in hygroma formation above the level operated in the extra-arachnoid and subarachnoid spaces, possibly from surgical manipulation and the dural irritation from the presence of epidural haematoma (7). For our case we feel this is also unlikely as the problem developed within 3 days of surgery.

Post-operative spinal subdural hygromas are not contained within a complete cyst wall as in the true arachnoid cysts, hence Singleton et al. (3) have appropriately labelled them as dissecting lumbar SSEH in their recent case report. Subsequent case report on an uncomplicated lumbar microdiscectomy and decompression had also described the post-operative subdural hygroma with the same terminology SSEH (4).

For our case, we have reported that the entrapped CSF collections can also occur at the subarachnoid space as SSSH, and together with SSEH, both can lead to cauda equina nerve root compression.

Both SSEH and SSSH may span a few levels up and above the index level of initial surgery, these can be potentially treated with a simple durotomy and wide arachnoid fenestration instead of performing multilevel decompressive laminectomies.

This is the first case reporting a concurrent SSEH and SSSH, which is a new observation, with both causing cauda equina nerve root compression which required surgical intervention. With our case report we hope to sound a note of caution to all spine physicians to take note of possible rare entities like SSEH and/or SSSH, if a patient develops early post-operative recurrence of lower limb or cauda equina neurological symptoms after spinal decompression surgery, as the signs and symptoms are readily reversible with early recognition and proper surgical treatment. There are methodological limitations, as like most of the case reports, in terms of the retrospective nature of the report and the fact that it lacks the power for generalization.

Inadvertent durotomy during routine lumbar spinal surgery is often uncomplicated if successfully repaired. However, if a patient develops early post-operative recurrence of lower limb or cauda equina neurological symptoms, the rare entities of SSEH and/or SSSH should be considered as one of the differentials even without intraoperative durotomy as in our case. If the diagnosis is suspected, surgical exploration should be performed with limited durotomy to decompress the cyst through wide fenestration of the arachnoid layers, as the signs and symptoms are readily reversible with prompt and early surgical treatment.

Reporting Checklist: The authors have completed the CARE reporting checklist. Available at http://dx.doi.org/10.21037/jss-20-601

Conflicts of Interest: All authors have completed the ICMJE uniform disclosure form (available at http://dx.doi.org/10.21037/jss-20-601). The authors have no conflicts of interest to declare.

Ethical Statement: The authors are accountable for all aspects of the work in ensuring that questions related to the accuracy or integrity of any part of the work are appropriately investigated and resolved. All procedures performed in studies involving human participants were in accordance with the ethical standards of the institutional and/or national research committee(s) and with the Helsinki Declaration (as revised in 2013). Written informed consent was obtained from the patient.