Anterior lumbar interbody fusion (ALIF) is a well-established technique for surgical management of conditions that require stabilization of the spine (1). The principal objective of the ALIF procedure is solid arthrodesis of the effected spinal segment and the success of this procedure is dependent on a variety of surgical and patient factors as well as the selection of the bone graft (2).

Autologous iliac crest bone grafts (ICBG) is osteoinductive, osteoconductive and osteogenic and remains the “gold standard” for fusions of the lumber spine with which all the graft alternatives are compared to (3). Harvesting autologous bone from the iliac crest has, however, been associated with several shortcomings (3-5), thus prompting research into better alternatives to autograft.

Technological advancements along with better understanding of the biology of bone-healing have led to the development of numerous bone graft substitute products that are commercially available to the orthopaedic surgeon. These vary in composition and modes of action.

Demineralised bone matrix (DBM), i.e., demineralized allograft bone, a subclass of bone graft substitutes, was first discovered in 1965 when Marshall Urist published his landmark paper in Science (6), showing ectopic osteogenesis occurred when DBM was implanted into a non-bony site. DBM was found to serve as a biological osteoinductive collagenous scaffold that induced new bone formation. It was in 1971 that Urist and Strates showed that bone morphogenic protein 2 (BMP-2), contained in the collagenous scaffold, were responsible for the “autoinduction” of bone (7).

Recombinant human bone morphogenic protein 2 (rh-BMP-2, InFUSE; Medtronic, Memphis, TN, USA) was first approved for clinical use by the US Food and Drug Administration (FDA) in 2002 for surgery of the anterior lumber spine to promote bone fusion (8,9). More recently, rhBMP-2 was shown to be equivalent to ICBG in anterior lumbar spinal fusions in humans, yielding similar or improved fusion rates and clinical outcomes (10). While BMP-2 has been shown to yield excellent fusion rates, some surgeons have been reluctant to use it or limit its use to more challenging cases, due to the complications that have been consistently reported in both lumbar as well as cervical fusion procedures (11-17).

A vast variety of DBM products have been available on the market for decades. The availability of these products and their formulations are constrained to different markets around the world by the respective regulatory bodies. Differences in DBM preparation and processing methods can greatly impact properties and clinical performance. Recently a new subclass of the traditional DBM products has been developed. Demineralised bone fibres (DBF) differ from the traditional powdered-form DBM products that require an exogenous carrier to facilitate handling, formulation, and reliable delivery of DBM products clinically (18). DBF can be used in concert with allograft/autograft bone, or alone, in order to improve the handling properties of the material and provide an increased amount of osteoinductive material to the site of healing without the need of a carrier. Furthermore, DBF may alleviate the need to use rh-BMP-2 in the less challenging ALIF cases.

We report on two cases of ALIF, both performed for discogenic low back pain, resistant to non-surgical therapies, on a background history of prior discectomy surgery.

A 29-year-old male presented with low back pain on a background history of a microdiscectomy surgery performed at L5/S1. Despite non-surgical therapies over a 15-month period, ongoing low back pain resulted in loss of employment as a labourer. Magnetic resonance imaging (MRI) and bone scan were suggestive of degenerative change at the L5/S1 disc, with absence of changes elsewhere in the spine. An L5/S1 ALIF was performed (Figure 1). A Redmond (A-Spine ASIA, Taiwan) 3-screw integral fixation ALIF construct was performed in combination with allograft bone and DBF, with follow-up over a 12-month period. Fusion status at 12 months revealed a solid union, with minimal symptoms. He returned to his occupation as a labourer following confirmation of fusion on a computed tomography (CT) scan (Figure 1).

A 37-year-old female presented with low back pain on a background history of multiple microdiscectomy surgeries performed at L4/5 over a 9-month period. Figure 2 reveals significant disc height loss, Modic type 2 endplate changes, and a positive bone scan at the L4/5 articulation. Conservative therapies were exhausted over 6 months. An L4/5 ALIF was performed (Figure 2), using a Redmond (A-Spine ASIA, Taiwan) 3-screw integral fixation ALIF construct packed with allograft bone and DBF. The patient was closely followed-up over a 3-month time period. Early osseointegration is detected at 3 months with significant reduction of her discogenic pain. 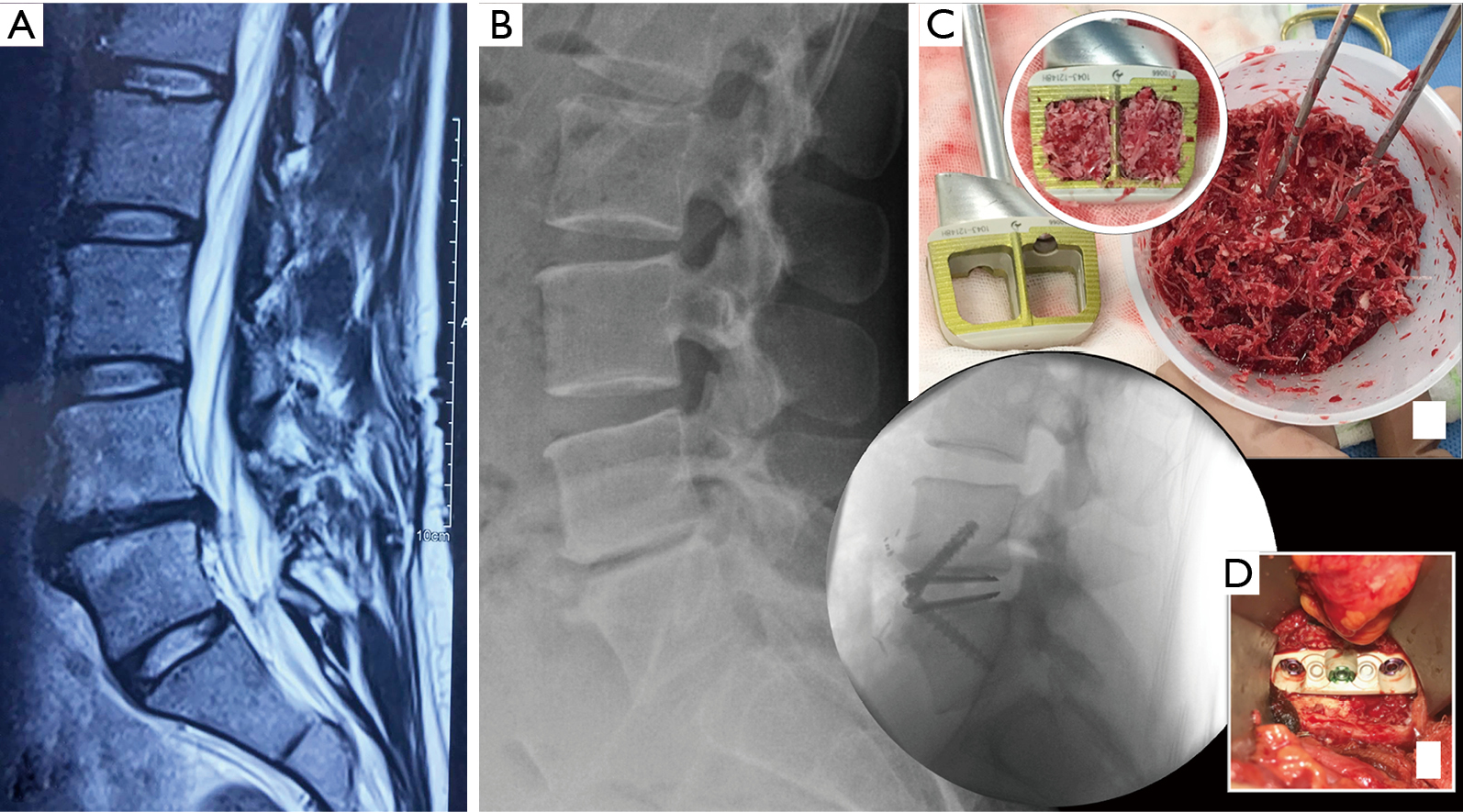 ALIF procedures allow cages with a larger footprint to be inserted when compared to the posterior interbody approach, without the need to disrupt posterior bony elements on approach. One trade-off for this is the lack of autograft in ALIFs, which would otherwise be plentiful with posterior exposures; hence the need to either harvest autograft using a separate incision (such as the iliac crest) or use allograft. Harvesting of autologous bone from the iliac crest has been associated with shortcomings such as neurovascular injury, increased duration of hospital stay, increased blood loss, cosmetic disadvantages, residual pain and donor site morbidity, and in some cases the quality and the quantity is limited (2-4). In ALIF procedures, where autograft is not as abundant as in posterior lumbar approaches, iliac crest graft is required to obtain adequate autologous bone graft. This requires a second incision at the harvesting site and is associated with further blood loss and post-operative pain at the hip. The use of DBF with SCCO2 allograft allows reduction of these morbidities, which can lead to better patient outcomes.

The use of SCCO2 treated allograft bone in spinal cages has become increasingly popular. It has been shown as an effective choice of graft in cervical fusion when used in combination with bone marrow aspirate (BMA), achieving a fusion rate of 97% (21). Despite its popularity and success, one of the obstacles with working with allograft bone, as it is with all particulate-based bone graft substitutes, is that when it is packed inside implant cages (even when mixed with autologous blood or BMA) some of it can be lost upon transfer from the preparation area to the surgical bed. This is largely due to the low propensity of crushed graft to stick to each other without a carrier. The above is further exacerbated with the use of powdered DBM which commonly comes in a freeze-dried state. In order to successfully utilize DBM in the clinical setting it must be mixed with a carrier to improve its handling and delivery characteristics. Without this, the particulate form of DBM is difficult to manipulate and readily disperses from its site of implantation (22). A number of different synthetic and natural materials have been tried in commercially available DBM products, including collagen, gelatin, glycerol, sodium hyaluronate, lecithin, acellular human dermal matrix and Pluronic; with variable osteoinductive performance reported (23-26). These exogenous DBM carriers contain non-osteoinductive constituents to enhance handling properties, allowing ease of packing into the surgical bed and prostheses. More concerningly, DBM carriers make-up up to 70% of the total material being implanted (27), resulting in only about 30% of the material at the healing site that is osteoinductive. Furthermore, the carriers are biodegradable and rapidly degrade once implanted, and as such, the degradation by-products could lead to an unfavourable inflammatory response that could slow down the bone healing cascade. Unlike the traditional DBM products, DBF allograft does not require an exogenous carrier, and when mixed with allograft or autograft bone, it can easily be packed both, in and around spinal cages. This allows the surgeon to not only ensure graft is packed inside cages, but also in any extra space around the cage in the disc space if desired. The added advantage of not having an exogenous carrier is that it ensures maximal volume of osteoinductive bone graft at the site of healing while not compromising the favourable handling properties.

DBF as an extender to allograft and autograft has previously been tested in relevant pre-clinical models (nude rat, rabbit) of posterolateral fusion. The rabbit model used rabbit DBF and autograft while the nude rat model examined human DBF and human allograft (SCCO2 treated). DBFs combined well with allograft or autograft and greatly improved the handling characteristics, allowing the graft to be easily placed in its intended graft site. Results showed all treated levels (both models) were fused at 12 weeks post-surgery based on manual palpation. Radiographically, an extensive network of new bone formation was seen with DBF integrated well with both the host bone (transverse processes) as well as the graft materials (allograft/allograft). These findings were confirmed by histology where mature bone marrow, outer cortex shell, and an interconnected trabecular bone network was present throughout the fusions at 12 weeks (28).

In our clinical experience, the combination of DBF with SCCO2 treated allograft bone greatly increased the handling properties of allograft bone and facilitated the packing of the graft into, and around, the fusion constructs. Due to the way the fibres remained together, the surgeon was able to easily shape the DBF/allograft bone mixture in and around the surgical bed with less wastage. The advantages of using DBF ensures bone graft material remains in cages when transferring the cage from the preparation area to the surgical bed, with minimal loss. This allows for optimal grafting with the presence of osteoinductive material at the site of healing to give the best opportunity for fusion.

Both cases we report on had SCCO2 allograft bone and DBF mixed with approximately 2 mL of the patient’s blood (via a sterile sample provided by anaesthetic staff at time of graft preparation). This mixture was then transferred into the ALIF cages, and given its consistency, was easily packed tightly. Post operatively, CT images (Figures 1,3) showed graft materials in the desired position with minimal spreading and transposition of bone fibres. 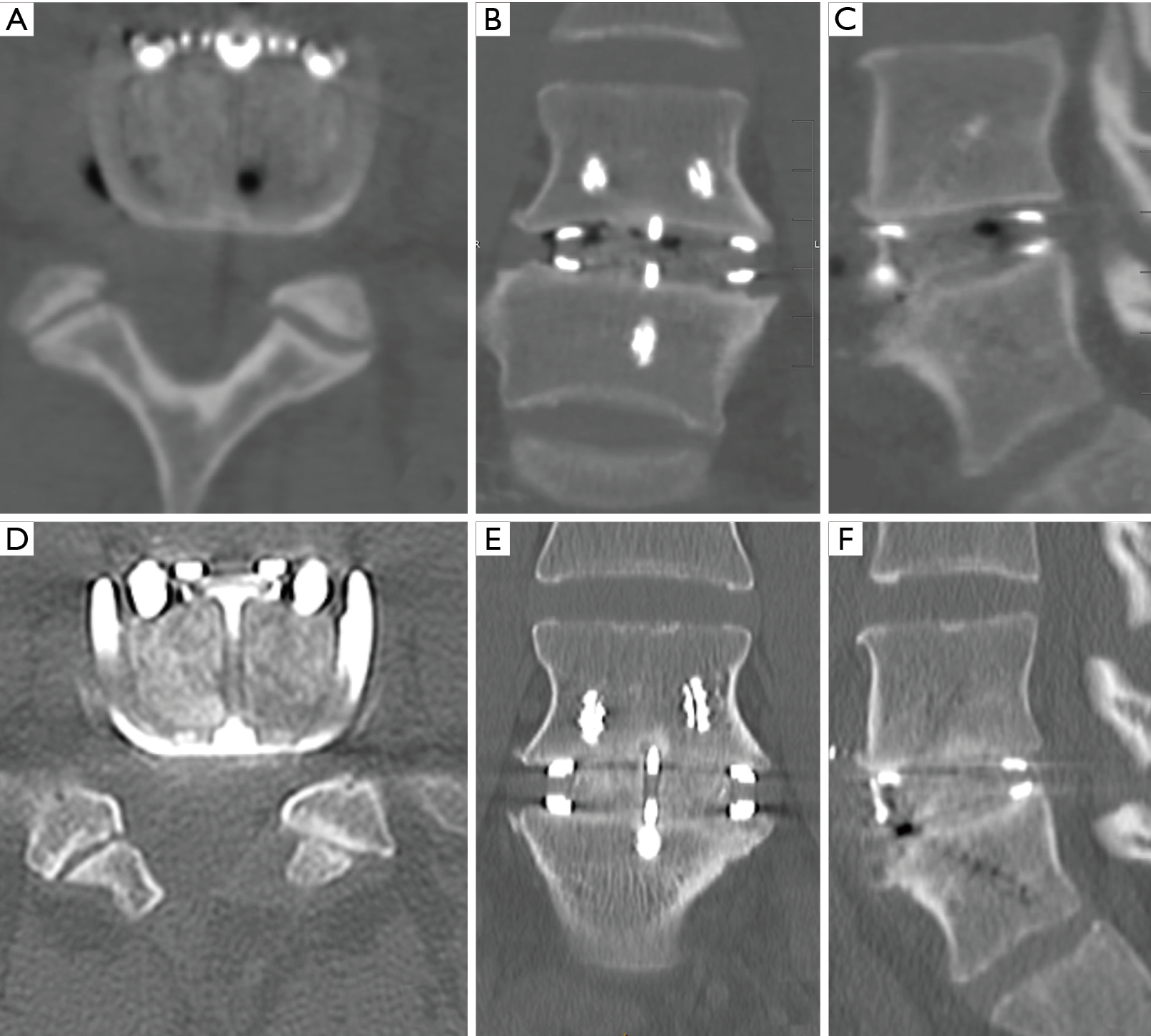 DBF graft, when used in conjunction with allograft DBM, showed to have fusion on post-operative CT scans (as shown in both cases) at as early as 3.5 months post-operatively (Figure 1A,B), with a solid construct by the 12-month mark (Figure 1C,D). Both cases outlined above had only SCCO2 treated allograft bone (Allovance® Crunch; Australian Biotechnologies, Sydney, Australia) mixed with osteoinductive DBF (Allovance Fibre Mat; Australian Biotechnologies, Sydney, Australia) and autologous blood. In selected patients with low risk of failure to fuse, the use of DBF with SCCO2 allograft can reduce the requirement of rhBMP, hence mitigating the risk of side-effects associated with its use.

As with the use of any prosthesis, patient selection is important in achieving optimal fusion with DBF and allograft. The cases outlined above were young, otherwise healthy non-smoking individuals without significant comorbidities (including osteoporosis), hence having lower risk of pseudoarthrosis (29,30). Therefore, DBF and allograft without BMP-2 preparation was inserted into the cages. Consideration must be taken as this preparation may not be suitable for patients at higher risk for pseudoarthrosis. The use of DBF with allograft can reduce the risk of complications with BMP-2, which adds to the economic benefit of not only cutting the cost of BMP-2 (10) but also potentially reducing length of hospital admissions dealing with its complications.

The use of DBF as an extender, in conjunction to SCCO2 treated allograft bone in lumbar constructs, alleviates the requirement for autologous bone harvesting and can assist in achieving early osseointegration and fusion. Given its favourable handling properties it allows the bone graft to be easily manipulated and packed into fusion constructs while providing the optimal amount of osteoinductive material to the site of healing. The combination of osteoinductive DBF and SCCO2 treated allograft bone is a clinically safe and effective, yet low-cost alternative to high-dose rhBMP-2 products such as INFUSE® Bone Graft (Medtronic, Sofamor Danek, Minneapolis, MN).

Conflicts of Interest: Both V Lovric and WR Walsh provide consulting services and obtain lab assistance with Australian Biotechnologies, Sydney, Australia. The other authors have no conflicts of interest to declare.