Micro-anatomical structures of the lumbar intervertebral foramen for full-endoscopic spine surgery: review of the literatures

Percutaneous endoscopic lumbar discectomy (PELD) can be performed via the transforaminal (TF) or interlaminar approach. The typical TF approach is guided by Kambin’s triangle (also known as the safety triangle) (1); an endoscope is inserted through the intervertebral foramen to observe and treat dural ventral lesions in the spinal canal. Having knowledge and understanding of the intervertebral foramen and surrounding microanatomy is essential because these influences the surgical indications and results. Understanding the microanatomy of the Kambin’s triangle over the intervertebral foramen is also required when the intermuscular posterolateral (Wiltse) approach is followed and TF lumbar interbody fusion (TLIF) is performed. Previous studies will be reviewed and outlined in this manuscript. 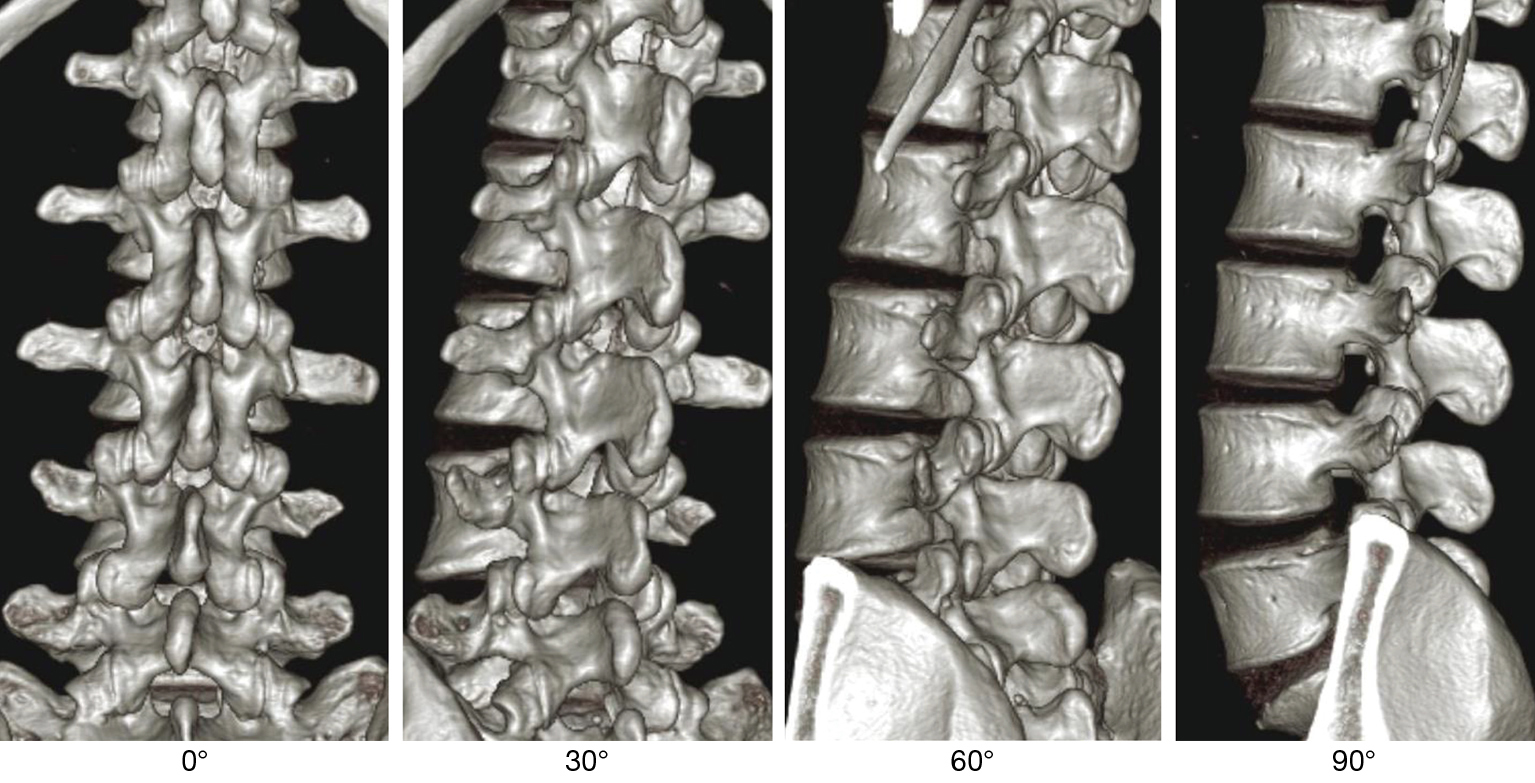 Figure 1 Various angles viewing the left side lumbar intervertebral foramen on 3D-CT in a healthy adult. 0°: from behind, 90°: from the left side. 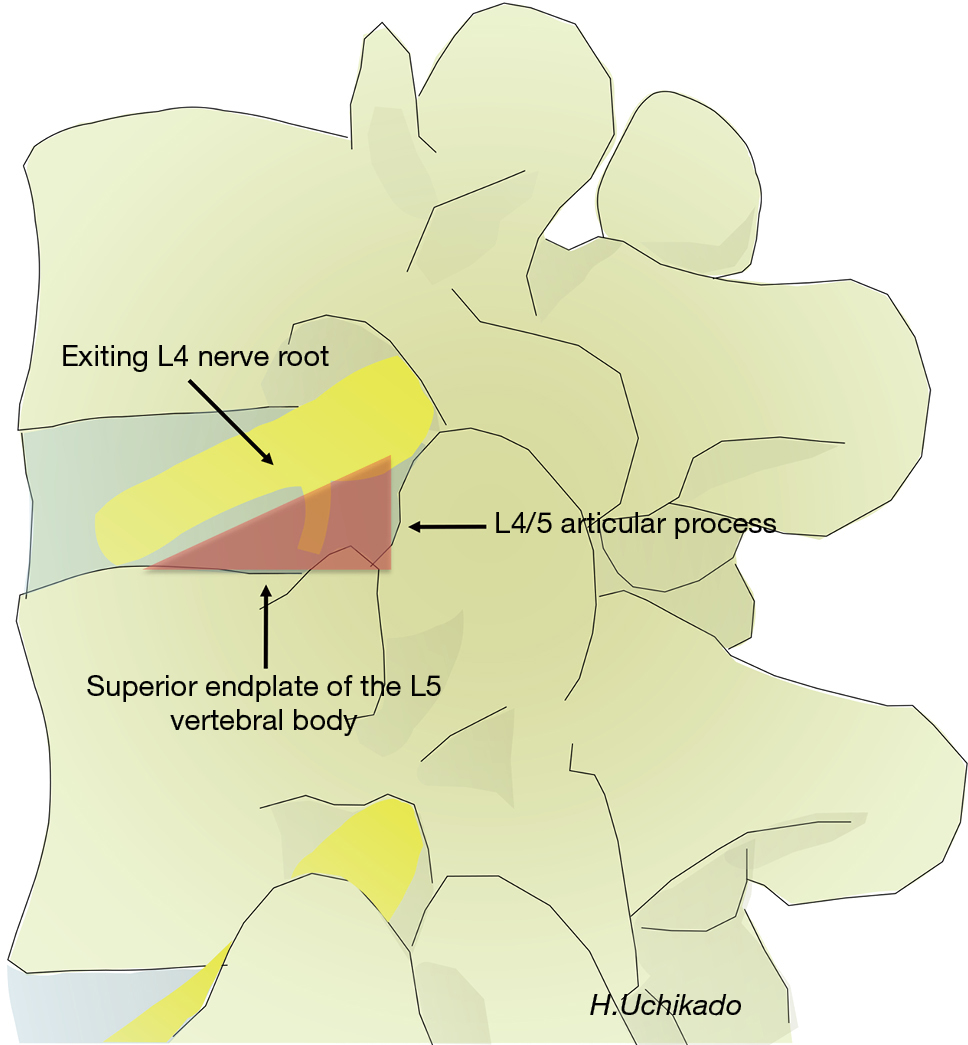 Ligament and vascular anatomy outside the lumbar intervertebral foramen

Inter-transverse ligaments (ITL) can be found in the group of muscles (from the inside, multifidus muscle, longissimus muscle, and iliocostalis muscle) on the posterodorsal side of the lumbar spine toward the intervertebral foramen. The lateral part of the facet joint is the entrance of the lateral part of the intervertebral foramen. There is a muscular branch called the dorsal branch between the ITL and the isthmus from the segmental arteries (9). The dorsal ramus (DR) runs along the periphery of the ganglion. It runs between the lower level mastoid and accessory processes to the facet joints inferior to one vertebra (10); for example, the DR from the periphery of the L3 ganglion passes between the mastoid and accessory processes of L4 to the L4–5 joint capsule. ITLs at the lumbosacral junction (L5–S1) are lumbosacral ligaments (11).

There are 2 EFLs, and Kraan et al. reported that these ran in different directions in the T12–L1 and L2–5 nerve roots (13). The inferior EFL starts in L2–5 from the intervertebral disc (origin) and continues onto the ventrolateral side of the nerve root. This ligament anchors the extraforaminal nerve.

The arterial bifurcation is divided from the abdominal aorta to the medial, middle, and lateral trunk from each segmental artery of L1–4 (segmental or lumbar artery) (Figure 4A). From the median trunk, after branching of the lumbar plexus and muscular branches, the spinal and ganglionic branches bifurcate into the ventral side of the intervertebral foramen head. Dorsal and anastomotic branches separate from the middle trunk (15,16). Ultimately, the lateral trunk reaches the abdominal wall. With respect to the spinal branch, the Adamkiewicz artery that branches out from the lumbar arteries is not always rare and is found in T12–L1 (16%), L1–2 (21.4%), and L2–4 (6%). It is necessary to pay attention to the development of spinal cord infarction during surgery (17). There is no lumbar artery for the L5 spinal branch, which branches from the iliolumbar artery from the internal iliac artery or median sacral artery. In the segmental artery, there is a communicating branch that runs longitudinally from the ventral side of the intervertebral foramen to the ventral side of the transverse process. This communicating branch is seen at each level and found in approximately half of in the cadaver study (16). This communicating branch runs approximately 4 mm anterior to the transverse process. Because the L5 lumbar artery is absent, the supply is obtained from the iliolumbar artery from the internal iliac artery or medial sacral artery. In case the supply is from the medial sacral artery, there is no communicating branch because there is no branching to the L5-S1 intervertebral foramen. If communicating branches are noted between L4 and L5, they are the thickest (0.4–0.42 mm) (16). This communicating branch runs through Kambin’s triangle ventral to the L4–5 foramen (Figure 4B). Particularly, damage to these structures seems to be the cause of retroperitoneal hematoma (18). Therefore, in patients who are suspected to have communicating branches, confirming and obtaining knowledge of the course of blood vessels in preoperative examinations is important (19). 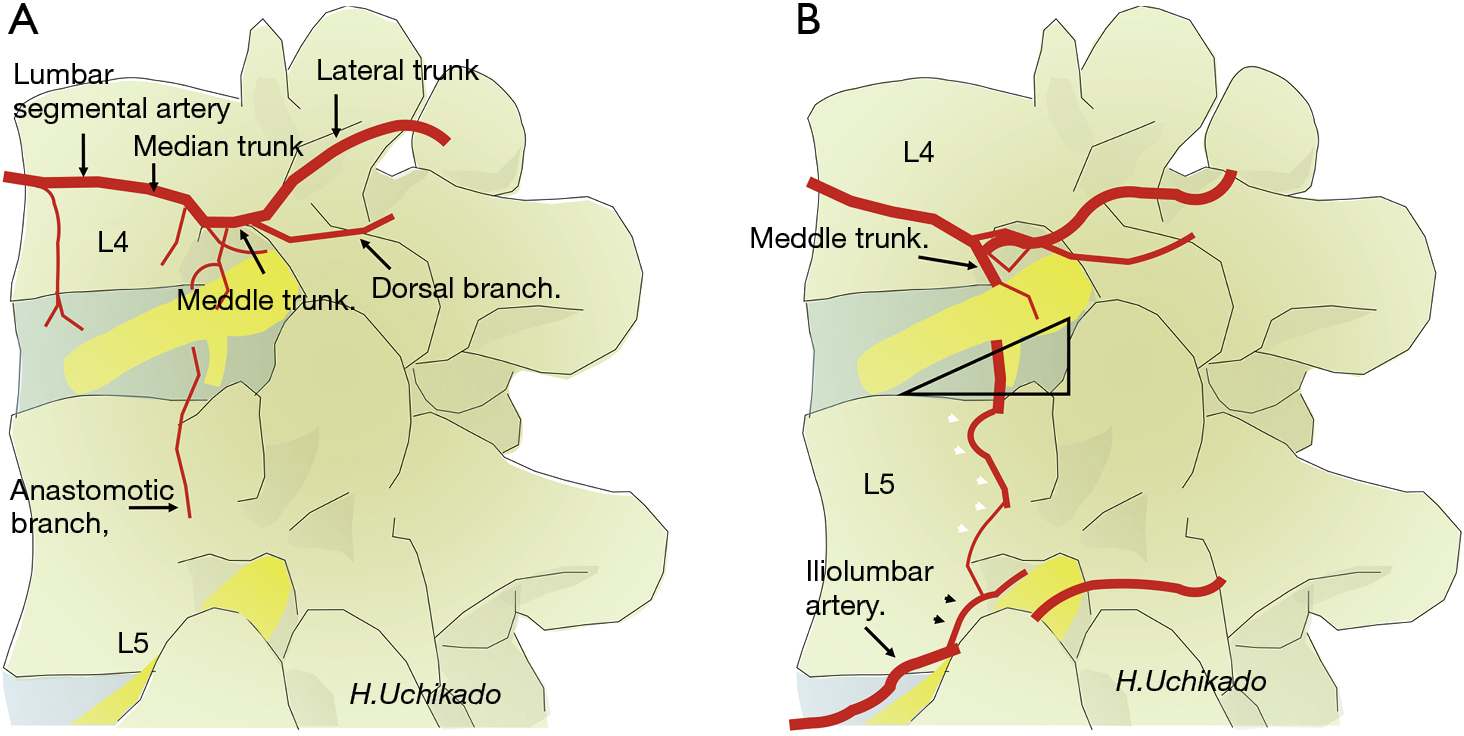 In PELD and retroperitoneal organs, it is necessary to pay attention to the kidneys and peritoneum in patients with L1–3 lesions. Particular attention must be paid to the pudendal femoral nerve in the lumbar plexus; however, this is less problematic because Kambin’s triangle is used as an indicator (20). Preoperative evaluations of the vascular anatomy surrounding the intervertebral foramen are extremely important to prevent complications. At the time of puncture, the right angle near the inferior superior articular process is more safety.

Ligament and vascular anatomy within the lumbar intervertebral foramen 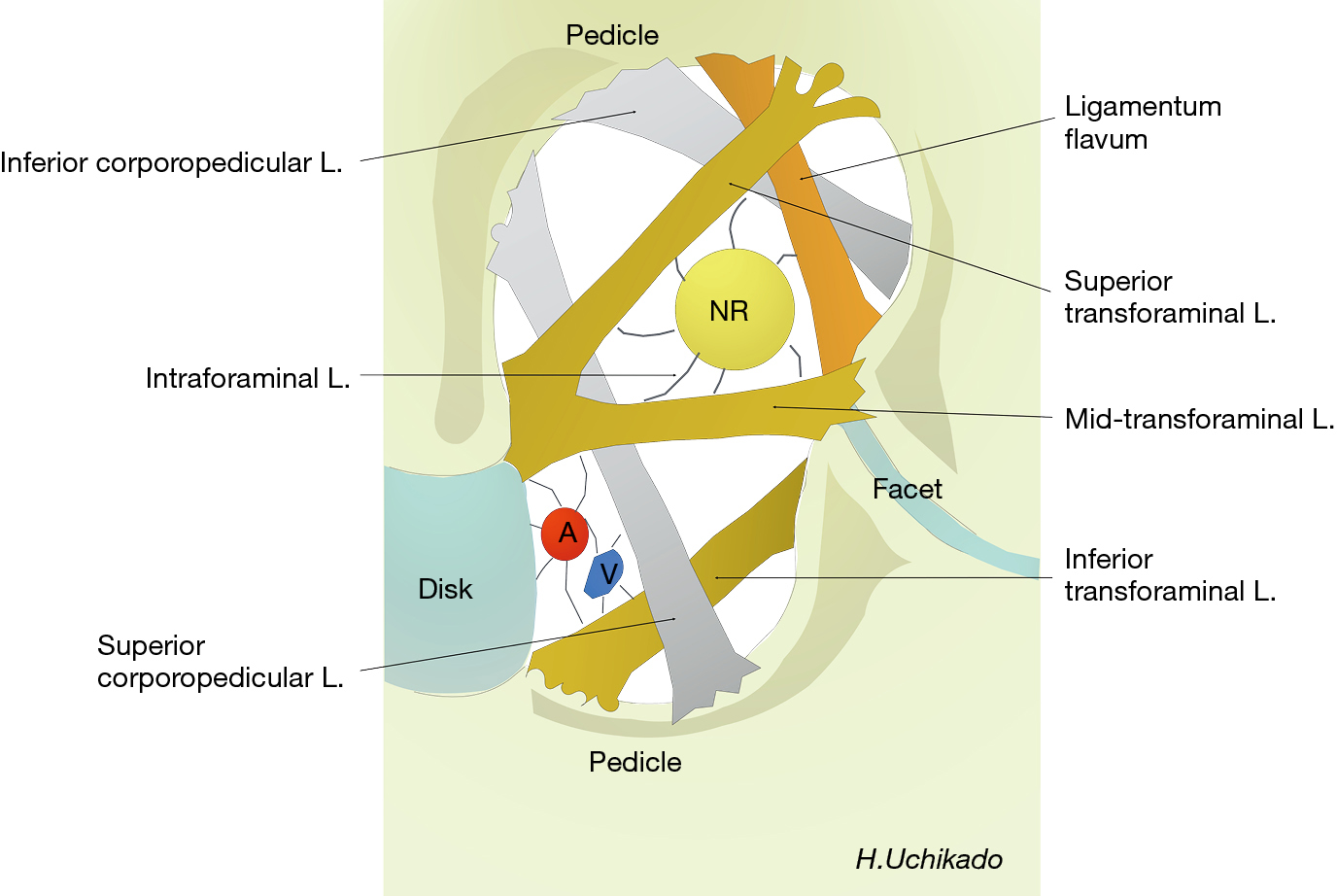 Of the arteries that pass through the intervertebral foramen, the spinal and ganglionic branches are critical (Figure 6). Results of study involving the use of 3D-CT angiography (3D-CTA) to confirm the presence of arteries in the intervertebral foramen have reported that arteries are also present within Kambin’s triangle (23). Therefore, because performing 3D-CTA in PELD is considered to be an important preoperative examination. 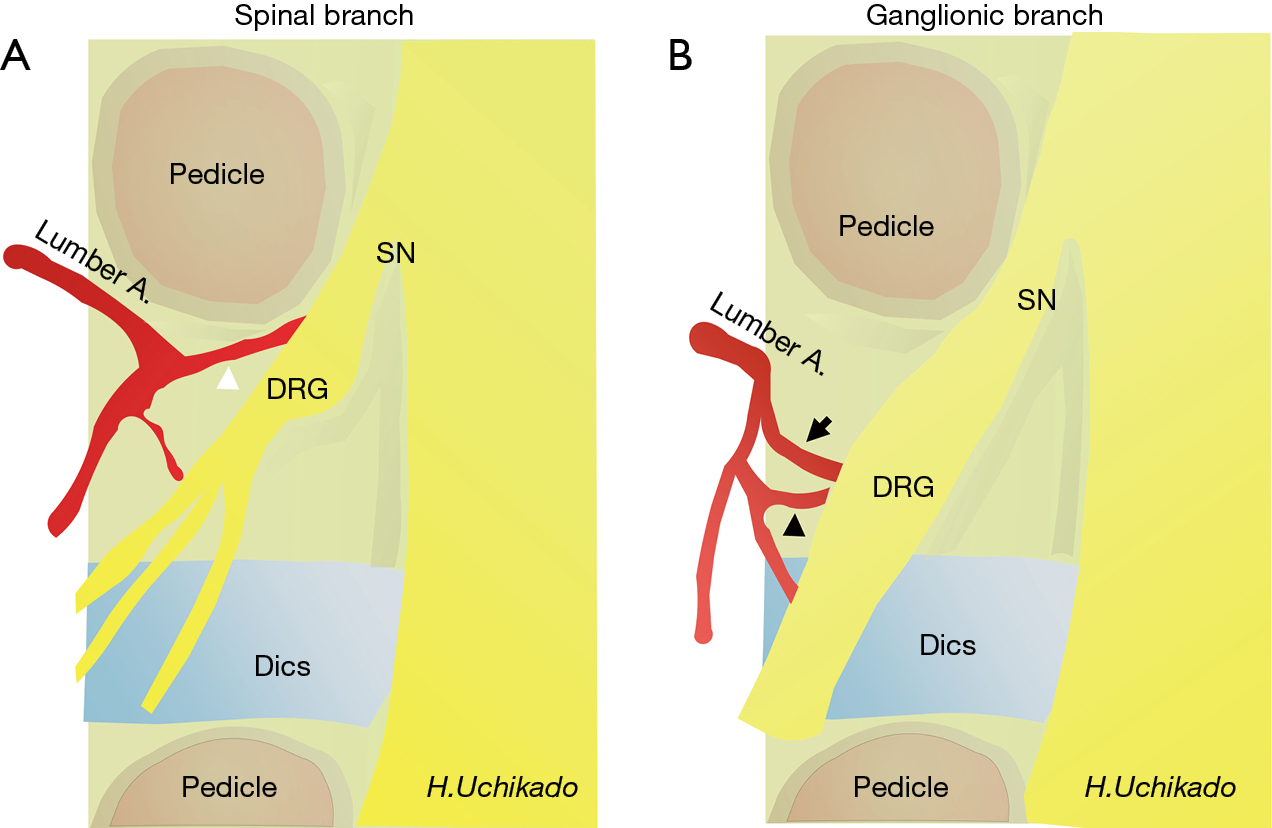 Figure 6 After the facets are removed, posterior schematic drawings of the lumbar artery and its branches in the intraforaminal area. (A) The spinal branch (white arrowhead) penetrates the sheath of the spinal nerve (SN). (B) The ganglionic branches (black arrowhead) are supplies to DRG. DRG, dorsal root ganglion; lumbar A, lumbar artery.

Variations in the course of the anterior and posterior nerve roots in the intervertebral foramen have been reported in detail by Kikuchi and Sato et al. (24-26). These variations have been suggested to also influence the clinical symptoms and efficacy of blocks or decompression. Cho et al. have reported on the relationships between the arterial course and dura mater around the dorsal root ganglion (DRG) and presented histological reports on the anterior and posterior roots (27). After dural penetration, the spinal and ganglion branches run along the anterior root, rather than the dorsal root; become the radicular artery; and run within the dura.

The nerve root is fixed by the ligament, and caution is required when utilizing a PELD cannula in the nonmobile foramen (Figure 7). Various reports on minimizing exiting nerve root injuries have been published (28,29). It is considered safe to perform foraminoplasty (30) and establish an approach or perform surgery under with the guidance of microscopy in patients with degeneration and intervertebral foraminal stenosis. 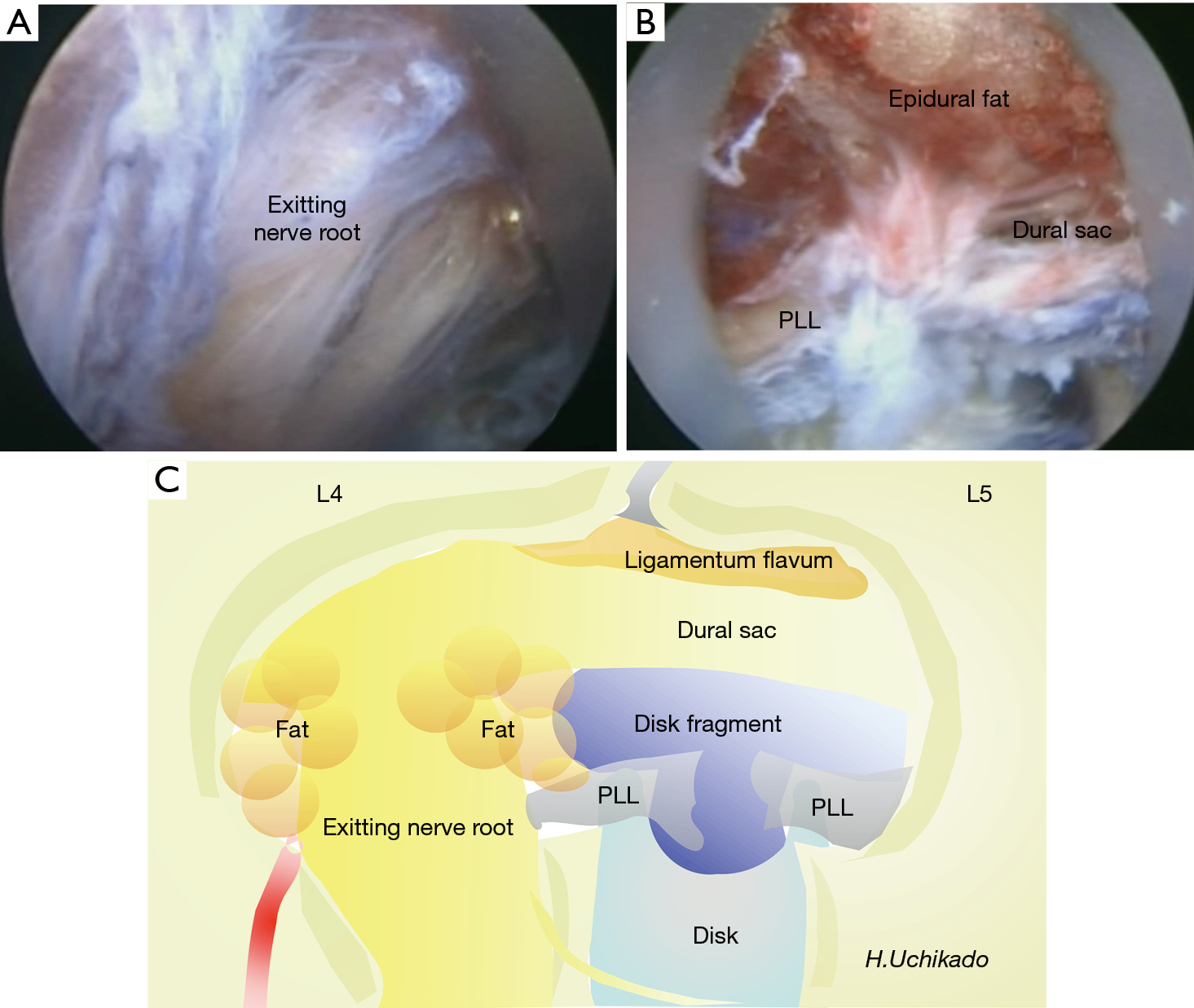 Spinal canal, which can be viewed through the intervertebral foramen, is the articular segment. This site comprises the intervertebral disc, ligamentum flavum, inferior superior articular process, and superior and inferior vertebral endplates. Degeneration of the articular segment is the cause of spinal canal and foraminal stenosis. The region surrounded by the vertebral arch (without the ligamentum flavum), vertebrae, and pedicle is the osseous segment; the epidural space on the dural ventral side of the vertebral posterior surface becomes wider at L4 and L5 than at L3 (31). The articular segment contains the ligamentum flavum (dorsal to the spinal canal) and posterior longitudinal ligament (ventral). The dorsal ligamentum flavum adheres to the superior margin of the caudal lamina from the middle and lower one-third of the ventral arch of the temporal lamina. The lateral side reaches the ventral side of the facet joint at the intervertebral foramen and migrates to the joint capsule and periosteum. Conversely, the posterior longitudinal ligament of the ventral side runs longitudinally in the center of the dorsal surface of the vertebral body. In the articular segment at the level of the intervertebral disc, the superficial layer shifts outward, becoming an epidural membrane and forming an epiradicular sheath. Abundant adipose tissue exists in the nerve root axilla, where the epidural venous plexus develops simultaneously (Figure 8A). Venous anatomy is more important than arteries in the spinal canal. When following the TF approach for PELD, internal vertebral venous layers that run longitudinally in front of the posterior longitudinal ligament on the ventral side of the spinal canal are noted (Figure 8B). Intravenous disruption has been reported in patients with herniated discs (32). 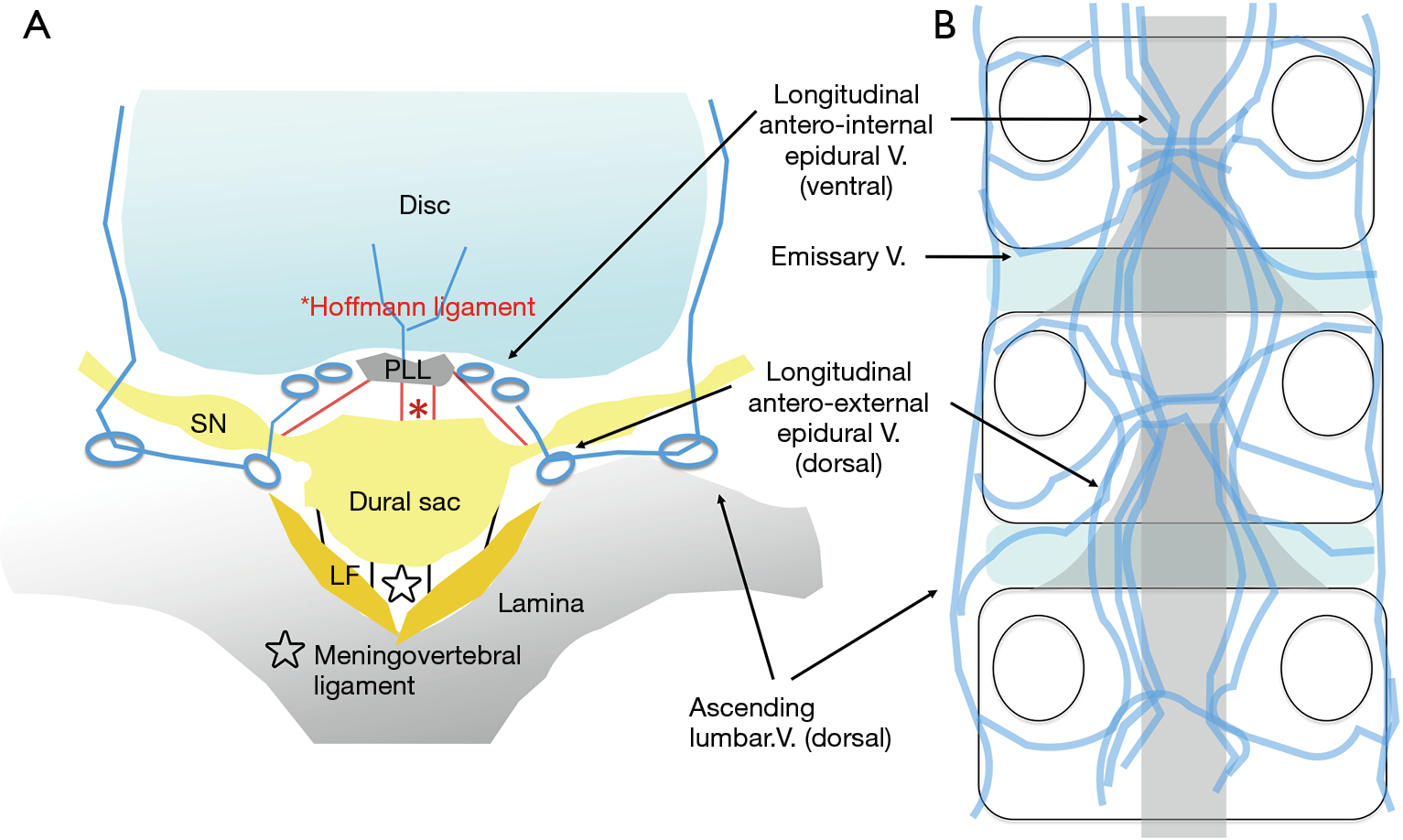 The dural sac is surrounded by a fibrous connective tissue, the epidural membrane. This thin membranous tissue contains abundant adipose tissue and is loosely connected to the right and left ligamentum flavum and posterior longitudinal ligament at the dorsal and ventral midline, that is, the dural sac is fixed by epidural ligaments and meningovertebral ligaments, which are located ventrally and dorsally to the spinal canal (Figure 8A). As initial findings during L5 laminectomy, Solaroglu et al. reported the presence of 1–2 ligaments, attention to terminal attachment (ATA) ligaments (33), connected from the dorsal surface of the dural sac to the medial cranial side of the ligamentum flavum. Damage to the ATA causes dural injuries and subsequent postoperative cerebrospinal fluid (CSF) leakage. Using cadavers, Shi et al. reported on endoscopic dissection at the lumbosacral level (34). Along the caudal side, the presence and number of ligament (0–2 or 3; width, approximately 0.6 mm; length, approximately 16 mm; thickness, 0.15 mm) increase, and the ligaments become the thickest and strongest at the sacral level. Because continuity with epidural fat vessels is also observed, the injury may cause intraoperative and postoperative epidural hemorrhage (18). On the ventral side of the dura, the so-called Hoffmann ligaments (35), which are attached slightly cranial to the nerve root sac from the superficial layer of the posterior longitudinal ligament, start from the periosteum and epidural membrane inside the pedicle (Figure 8A). These fibers are involved in forming the lateral root epiradicular sheath (29). Mobility of the nerve root changes significantly after resection of these Hoffmann ligaments. Injury to the ventral dura mater of the Hoffmann ligaments can result in CSF leakage, and consequently, prolapse of the herniated nerve roots (36) and herniated disc into the dura mater (37) can occur; therefore, such injuries should be handled with extra care.

Lastly, having knowledge of the anatomy around the lumbar intervertebral foramen is essential while following the TF approach for PELD techniques. Moreover, performing preoperative imaging is important for the success of the procedure, which leads to the prevention of complications and better diagnostic and therapeutic outcomes.

The authors thank Crimson Interactive Pvt. Ltd. (Ulatus)—www.ulatus.jp for their assistance in manuscript translation and editing.

Conflicts of Interest: All authors have completed the ICMJE uniform disclosure form (available at http://dx.doi.org/10.21037/jss.2019.10.07). The series “Full-endoscopic Spine Surgery” was commissioned by the editorial office without any funding or sponsorship. The authors have no other conflicts of interest to declare.