Anterior cervical discectomy and fusion (ACDF) with plate fixation is the current standard treatment for symptomatic cervical myelopathy and radiculopathy unresponsive to non-operative care, especially when kyphosis prevents dorsal cord migration and adequate ventral cord decompression with posterior procedures (1). ACDF utilizes a dissection through intermuscular planes which minimizes muscle trauma which is commonly seen in a posterior approach. An anterior discectomy is performed with placement of an interbody graft and commonly a stabilizing anterior plate. Interbody graft may include structural allograft, structural autograft or a combination thereof with an interbody cage of titanium or polyether ether ketone (PEEK). The goal of the surgery is to decompress the spinal cord and/or nerve roots while maintaining bony integrity, spinal stability and restoring cervical lordosis (1,2).

Fraser and colleagues reported 97% fusion rates for single level ACDF (3). Even without plating or the use of a post-operative orthosis, Jagannathan et al. reported a 94% fusion rate in a retrospective study of single-level ACDF procedures (4). However, pathology occasionally extends over multiple levels complicating surgical management. In multilevel ACDFs, primary concerns relate to the increased soft tissue dissection and retraction needed for exposure, as well as the increased number of endplate surfaces required for successful fusion (5). Numerous studies in the literature have shown a significantly greater risk of non-union (3,6,7), revision and complication (8) with multi-level ACDFs. The purpose of the current study is to report on clinical outcomes and revision rates following three and four level ACDF procedures.

Patients who underwent three- or four-level anterior cervical discectomy with plate fixation between 2006 and 2011 from a single-center multi-surgeon spine specialty practice for symptomatic cervical degenerative disease were identified from the surgical and outcome database. Operative technique was standard across all surgeons, including anterior annulotomy, thorough removal of all disc material, removal of cartilage with microsurgical curettes and decortication with high-speed burr with careful attention to not violate the endplates. Local autograft from removal of osteophytes and allograft were used to supplement PEEK or titanium interbody fusion cages. The operative vertebral bodies were spanned with a titanium plate in locking fashion. Standard demographic data including age, gender, and smoking data were collected. Surgical data collected included number of surgical levels, American Society of Anesthesiologists (ASA) Grade, operative time, estimated blood loss and length of hospital stay. Patient reported outcomes (PROs) included the neck disability index (NDI), numeric rating scales (0 to 10) neck and arm pain pre-operatively and at one and two years after surgery were also collected. Any complications and subsequent need for a revision surgery were identified from review of medical records.

This study obtained ethics approval from the University of Louisville Institutional Board (study number 14.1036) and the Norton Healthcare Office of Research Administration (study number 14.N0265). 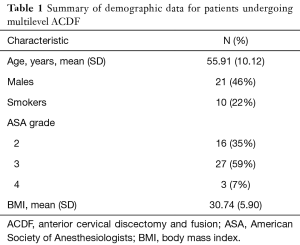 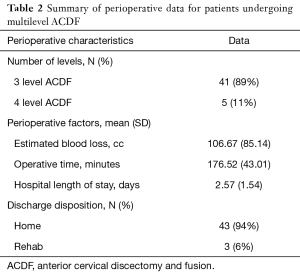 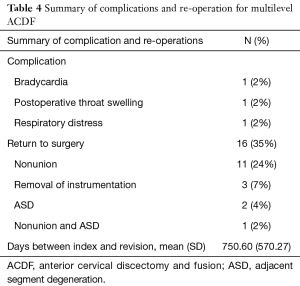 ACDF with plate fixation is the current standard surgical treatment for cervical spondylosis with radiculopathy. Unfortunately, there is a shortage of high quality evidence examining multilevel ACDF. The current study reports on the outcomes and revision rates of multilevel ACDF for the treatment of cervical radiculopathy. Understanding the efficacy of multilevel ACDF procedures will permit more educated and evidence-based surgical decision making in the treatment of cervical disorders, as well as appropriate patient counseling.

Overwhelmingly greater reoperation rates have been reported with multilevel ACDF when compared to single or two-level procedures. The reported increase in pseudarthrosis seen in multilevel ACDF is due to greater graft-bone interfaces required for fusion and altered biomechanics at several segments (7,11,12). In the current study, we report a 35% reoperation rate: 26% for pseudarthrosis and 6% for ASD. However, the rates of ASD, pseudarthrosis, and reoperation are quite varied across the literature. Veeravagu and colleagues performed an analysis of an administrative database and reported 10.7% revision surgery rate for multilevel ACDF—significantly greater than the 9.13% for single level ACDF (8). Moreover, multilevel ACDF patients had greater all cause hospital readmission (OR 1.2, P=0.007) and more complications (OR 1.3, P=0.0003) (8). A systematic review reported 27.33% for adjacent segment degeneration in one or two level ACDF and 29.73% in three, four, or five level procedures (13). In three level ACDF procedures, Papadopoulos et al. reported adjacent level disease in 25% of patients and with 4.5% of patients requiring additional surgery (9). Additionally, Song et al. reported 64% adjacent level disease with 8% revision surgery in a comparison study of ACDF versus anterior cervical corpectomy and fusion for multilevel CSM (10).

In the current study, we report an overall complication rate of 6.5%, with the most common complications including bradycardia, post-operative throat swelling and respiratory distress. Fountas and colleagues performed a retrospective study of 1,104 patients receiving ACDF surgery. The authors reported a 19.3% complication rate: 9.5% due to postoperative dysphagia, 5.6% due to hematoma and 3.1% due to recurrent laryngeal nerve palsy (5). Furthermore, they found that 3-level ACDF procedures resulted in greater rates of postoperative dysphagia compared to 1- or 2-level procedures (5). Similarly, Veeravagu et al. reported significantly greater complications in multilevel versus single level ACDF (OR 1.4) (8).

Despite the increased risk of complications, the current study suggests that multilevel procedures are effective. The NDI scores in our series improved from 34.46 at baseline to 25.47 at 24 months after surgery, an 8.99 overall mean improvement. Li and colleagues compared multilevel ACDF and anterior cervical corpectomy and fusion in patients with four-level CSM. The authors reported a significant decrease in NDI scores from 26.5±3.0 to 13.1±3.2 in the ACDF cohort (2). In a similar comparison study of ACDF and anterior cervical corpectomy and fusion, Lin et al. reported an NDI improvement from 12.56±3.0 preoperatively to 3.44±1.7 postoperatively (14). The authors concluded that NDI improvement was better in ACDF, but clinical outcomes were not significantly different between the two cohorts (14).

The limitations of this study are largely related to the small sample size of 46 patients. Unfortunately, the overwhelming majority of ACDF procedures were three levels. The limited number of four level procedures limits the ability to further stratify data to compare three and four level ACDF procedures with statistical significance. Lastly, because all patients within this study were operated on at a single institution by a single surgeon, the generalizability may be limited.

ACDF is an effective surgical option for treating CSM across multiple levels. However, multilevel ACDF is associated with greater reoperation, complication and pseudarthrosis rates when compared to single level ACDF. Spine surgeons must recognize these factors and educate patients appropriately when indicating the appropriate procedure for cervical radiculopathy. In the current study, patients undergoing three- and four-level ACDF for multilevel cervical disease demonstrate substantial improvement in outcomes; however, the 35% two-year revision rate is exceedingly high.