Cement augmentation of vertebral bodies began in 1987 with the treatment of vertebral hemangiomas by Gailbert et al. (1). In 2001, kyphoplasty was introduced as a novel method of augmenting vertebral bodies with cement (2). In 2009, two studies of vertebroplasty versus sham procedure concluded that vertebroplasty was unsuccessful (3,4). Kyphoplasty usage declined significantly in 2009, presumably secondary to the results published in these two studies (5). Despite these reported outcomes, anecdotal success with kyphoplasty continued among individual surgeons. Other publications subsequently appeared in the literature that directly contradicted the results from the sham studies, including one randomized controlled trial (6) and one large observational study (7). Results from these studies have highlighted the ability of kyphoplasty to decrease subjective measures such as back pain (6-9), improve quality of life (6,9), reduce physical disability and decrease mortality (10-12). The effect has been studied mainly in the osteoporosis literature but has also shown effectiveness in the groups of patients suffering from pathological fracture secondary to malignancy (13).

The economic impact of kyphoplasty has been studied and shown to reduce healthcare utilization (14), shorten hospital stay (10,11), decrease outpatient follow up visits (15), and reduce narcotic use (7). Currently, healthcare reimbursement is dependent upon not only standardized measures of success but also high patient satisfaction. Current research supports the use of kyphoplasty from a functional and economic standpoint but looking at patients’ perspective in medical research is important to complete the overall picture of efficacy. To date in the kyphoplasty literature, only one paper, the 2-year follow up from the FREE paper, has mentioned patient satisfaction using a 20-point Likert scale (9). They mention statistical significance but do not elaborate on the subject. The objective of our survey was to assess patient-centered outcome measures using specific questions directed at procedure tolerability, pain relief, and willingness to undergo the same procedure again to show the benefits of kyphoplasty not only objectively, but also subjectively from the patients’ perspective.

Patients were eligible for kyphoplasty based on magnetic resonance imaging or nuclear bone scan demonstrating an acute compression fracture, hyperintensity on STIR sequences and hypointensity on T1 sequences suggesting edema, as well as clinical findings of intractable back pain despite non-operative treatment. All patients identified had a kyphoplasty performed by unipedicular, bipedicular or extrapedicular approach depending upon surgeon preference. All kyphoplasty was performed using the Kyphon Balloon Kyphoplasty system (Medtronic Spine, LLC, Sunnyvale, CA, USA).

The included patients were contacted through telephone numbers obtained in the demographic data of their electronic health record. The “Kyphoplasty Telephone Satisfaction Survey”, a simple three-question survey, was administered to the patient. Institutional review board approval was obtained prior to data collection. Questions asked by the survey are presented in Table 1. No family member was allowed to take the survey for the patient. If the patient was unable to complete the interview through the telephone they were excluded from the survey and study. If the patient was unavailable for conversation or unreachable, two more attempts were made, for a total of three attempts, before the patient was counted as unreachable and excluded. 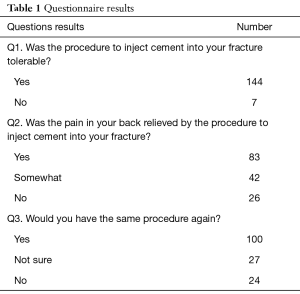 Four hundred ninety-two patients were identified from the coding query. Of these, 173 patients were excluded due to identification on the Social Security Death Index as being deceased. Three hundred nineteen patients remained. Nine patients refused to participate in the questionnaire and were excluded. One hundred and fifty-nine were unreachable or unable to complete the questionnaire. The remaining 151 of available 310 alive participants were reached and completed the survey, a response rate of 48.7%.

This patient cohort of respondents represents a typical variety for a private practice physician performing these procedures. Full characteristics of the respondents are presented in Table 2. The majority of the patients were Caucasian females. The age range was from 26–101, with an average age of 74.3. The most common level requiring kyphoplasty was L1, followed by T12 and then L2. Overall, 61.3% of fractures were at the thoracolumbar junction (T10–L2). Most patients (130 of 151) had either one or two levels treated. No patient had more than three levels performed at one time. The cause for surgery was mainly osteoporotic or spontaneous fractures, which accounted for 72.0% of all patients.

Since the two studies in 2009 that showed no benefit of vertebroplasty over sham surgery, there have been large studies specifically regarding kyphoplasty which have contradicted this finding. While there have been many smaller non-randomized studies (8,14), two major studies (6,7) and a systematic review (16) have shown objective decrease in pain, improvement of quality of life and decrease in physical disability from kyphoplasty as compared to conservative management (6,7).

The patient population presented is similar to the only previous large kyphoplasty specific studies. The FREE trial had 149 patients in their kyphoplasty group of which 77% were female, the SWISS observational study 69.6% female, whereas our study contained 81% female. The average age of our patients was 74.0 while FREE had an average age of 72.2 and the SWISS study was 69.4.

Overall, 58.3% of patients had one fracture treated, compared with 67% for FREE and 77.1% for the SWISS study. The number of patients with two fractures treated was higher in our population at 27.8% than previously mentioned studies. Differences in these numbers may exist as many of our patients had more than one surgery within our four-year collection period, while the FREE study had only one surgical intervention, while it is not clear in the SWISS study if patients were treated in multiple surgeries. Most of the fractures treated were in a similar area to previous studies; 61.3% were treated at the thoracolumbar junction (T10–L2) in our respondents as compared to 59% in the FREE trial.

The FREE study also collected patient satisfaction data based on a 20-point Likert scale and noted statistical significance to from 1 to 24 months post operatively. The data presented here show similar results and attempt to build on the FREE results. The questionnaire used in this study was aimed at gathering additional and more specific patient-centered outcomes on kyphoplasty.

Our questionnaire is subject to recall bias. The patients who had procedures in 2008 were called in 2013, thereby introducing approximately 5 years between time of procedure and questionnaire administration. When breaking down the data to compare years, patients who had the procedure in 2008 had the same overall trend in answer choice, with one exception. Patients in 2008 responded “somewhat” to pain relief question 2 53.8%, and “yes” only 28.6% of the time. This trend was reversed in all following years. This finding could be a result of improved surgeon skill over time or recall bias as described above. A perceived limitation of this study may be the lack of objective data such as ODI, RM scale, VAS scale, but we were only attempting to elicit the patients’ individual perspective using patient-centered outcome data.

Since kyphoplasty’s inception, a rocky road has lead from individual anecdotal success to large randomized and observational evidence supporting its use in selected populations. In a changing healthcare environment, it is paramount that patient satisfaction is high among selected procedures. Our population of patients has now shown that kyphoplasty is also well-tolerated, effective, and desirable, based on individual patient perspective.