Utilization of vertebroplasty and kyphoplasty procedures throughout the United States over a recent decade: an analysis of the Nationwide Inpatient Sample

The incidence of vertebral compression fractures (VCFs) increases markedly with age and is one of the most common sequelae of osteoporosis, comprising almost half of all osteoporotic fractures in the US annually (1-3). Patients with VCFs often experience severe back pain that may limit mobility and subsequently increase mortality in an already vulnerable elderly population (1). Thus, multiple treatment modalities have been indicated including pain medication, medical osteoporosis treatment, physical therapy, bracing, and surgery. The surgical indications for vertebral augmentation procedures, such as kyphoplasty and vertebroplasty, have varied in the literature, but are most commonly reserved for fractures with significant local deformity and patients with pain refractory to conservative management (4,5).

Vertebroplasty procedures involve the percutaneous injection of bone cement into a fractured vertebra, with the intent of stabilizing the vertebral body thereby improving pain control. Unfortunately, vertebroplasty is unable to restore vertebral height and has been associated with retropulsion of cement into the canal in up to 67% of cases (6-9). Kyphoplasty, a subset of the vertebroplasty procedure, involves the inflation of a small balloon in the vertebral cavity and restoration of sagittal parameters in addition to stabilizing the fractured vertebra (10). Multiple retrospective and prospective trials demonstrating the efficacy of vertebroplasty or kyphoplasty compared to placebo and standard medical therapy have been published (11-13). However, the evidence in those trials was limited by a lack of true blinding with sham-surgery.

In 2009, two double-blind randomized controlled trials utilizing sham-surgery were published and reported no demonstrable difference in pain control or function between study groups. The authors attributed findings of prior studies to a procedural placebo effect (14-17). Due to concerns about low enrollment numbers, inclusion criteria, and particularities of cement injection in these studies, the debate about treatment efficacy has continued (17-19). Nevertheless, the 2009 trials were highly regarded by the orthopaedic and general medical community at large.

The purpose of this study was to determine the trends in kyphoplasty and vertebroplasty procedures over the recent decade, and to evaluate the decline in procedure utilization. By performing a longitudinal analysis of an administrative inpatient database, we may understand the yearly trends and economic data surrounding percutaneous vertebral augmentation procedures. An appreciation for the yearly national aggregate cost of these procedures is of significant importance to surgeons, policy makers and hospital administrators. In this study, we utilized data from the National Inpatient Sample (NIS) database to compare a large national cohort of patients who underwent kyphoplasty and vertebroplasty procedures from 2006 to 2014.

Data was collected from 44 states between 2006 and 2014 in the NIS database. The NIS database was developed for the Healthcare Cost and Utilization Project (HCUP) and constitutes the largest all-payer inpatient database in the United States. The database represents a 20% sample of discharges from U.S. hospitals (excluding rehabilitation and long-term acute care hospitals), which is weighted to provide national estimates.

The NIS database was queried for patients who underwent either kyphoplasty or vertebroplasty procedures between 2006–2014 using international classification of diseases, ninth revision, clinical modification (ICD-9 CM) codes 81.66 and 81.65, respectively. There were no additional criteria for patient exclusion.

Demographic and economic data were obtained for both kyphoplasty and vertebroplasty procedures. Insurance types included Medicare, Medicaid, private, uninsured, and other. The “other” category included workman’s compensation, TRICARE/CHAMPUS, CHAMPVA, Title V, and a number of other government insurance programs. The annual number of surgeries, patient age, sex, total charges, total costs (in then-year dollars), insurance type, length of stay (LOS), location, and frequency of routine discharge were recorded. Aggregate charges or the “national bill” was defined as the sum of all charges for all hospital stays in the United States. Total charges were converted to costs using cost-to-charge ratios based on hospital accounting reports from the Centers for Medicare and Medicaid Services (CMS). Costs reflect the actual costs of production, while charges represent what the hospital billed for the case. Relative standard error (SE) (SE/weighted estimate) was reported where applicable.

Descriptive statistics were performed to compare variables. A two-sample student t-test was employed to analyze the difference in continuous variables and Chi-squared or Fisher’s exact test was employed for categorical variables. Findings were considered statistically significant when P<0.05. Analysis was conducted using IBM SPSS Statistics Version 24. The NIS database is de-identified and was therefore deemed exempt by our institutional review board. 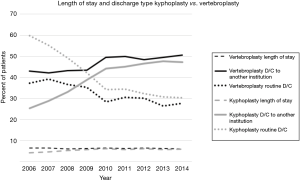 The decreased functional status and severe back pain refractory to conservative management associated with some VCFs has led to the development surgical approaches such as vertebroplasty and kyphoplasty. Despite the differing approaches, the goals behind both treatment modalities are similar: alleviation of pain and prevention of further deformity (10,20). The purpose of the current study was to determine the trends in utilization and cost of these vertebral augmentation procedures over the recent decade.

The data from this study is consistent with previously published studies. Following the publication in 2009 of the two RCTs questioning the efficacy of vertebroplasty, a decline in both vertebroplasty and kyphoplasty procedures was observed. Sayari and colleagues demonstrated a 94.5% decrease in vertebral augmentation procedures performed in the Medicare dataset alone (20). Soon after the RCTs in 2009, results of the VERTOS II trial were published in 2010, demonstrating vertebroplasty as more effective than conservative therapy treatment of refractory pain following vertebral osteoporotic fractures (21). Despite these positive results, utilization of vertebroplasty procedures continued to decrease. Our analysis showed a 53% decrease in the use of vertebroplasty from its peak in 2008.

The decline in utilization of vertebral augmentation procedures was sustained until 2014 for vertebroplasty but interestingly changed direction from 2011 to 2014 for kyphoplasty (Figure 1). The emerging increase in kyphoplasty procedures may be the result of a majority of procedures performed by radiologists since 2012 (22). Though the efficacy of vertebroplasty was questioned in the 2009 studies in the New England Journal of Medicine, a study published in The Lancet in 2009 demonstrated the efficacy of kyphoplasty in alleviating pain in cancer patients with VCFs (23). As a result of these reports in the literature, physicians have gravitated towards kyphoplasty as the surgical treatment of choice for VCFs in recent years. Interestingly, a recent meta-analysis of trials between 2005 and 2014 failed to report significant difference between kyphoplasty and vertebroplasty (24).

The recent increase in kyphoplasty procedures is especially important when considering that kyphoplasty costs more than vertebroplasty. The average cost for a vertebroplasty from 2006–2014 was $12,747 while the average cost for a kyphoplasty in the same time period was $15,295 (Figure 3). In addition, an increased frequency of discharge to other institutions was observed following both types of vertebral augmentation procedures (Figure 2), a trend that will only increase the overall cost burden of these procedures. Though the aggregate national charges for vertebroplasty decreased from 2008–2014 to a total of $331,711,173 in 2014, charges for kyphoplasty increased from 2011–2014 to a total of $1,372,915,605 in 2014. With the observed increase in cost of vertebral augmentation procedures, as well as the increase in utilization of kyphoplasty in recent years, the most cost-effective approach to surgical fracture management in these patients must be defined.

Many of the limitations of this study are due to the intrinsic limitations of large patient databases. The NIS database does not include physician-based fees and costs are calculated from hospital specific cost-to-charge ratios, which may exaggerate surgical cases. Still, these hospital specific cost-to-charge ratios have been internally validated by the Agency for Healthcare Research and Quality. Inherent to a large study, the surgeries were performed by a large variety of surgeons, allowing for differences in surgical technique and potential indication bias. Furthermore, there can be potential inaccuracies of ICD-9 CM billing records, errors transferring data from hospital records to administrative records, underreporting of procedures, or exclusion of missing cases in the NIS database.

Vertebral augmentation procedures continue to be vital surgical procedures for alleviating refractory pain in patients with VCFs. In this analysis of the NIS database, both kyphoplasty and vertebroplasty utilization have declined after the publication of highly regarded trials in 2009 failing to demonstrate efficacy of vertebroplasty procedures for pain relief in VCFs. Since 2011, kyphoplasty procedures have experienced an emerging increase in utilization. Our findings corroborate the trend of kyphoplasty and vertebroplasty in the current literature, which may be a direct consequence of the results of the 2009 trials and increasing radiologist involvement in these procedures. Further prospective randomized trials are necessary to more rigorously evaluate the long-term outcomes and cost-effectiveness of kyphoplasty versus vertebroplasty from a national healthcare perspective.

Ethical Statement: The study was approved by the institutional review board (IRB) at Columbia University Medical Center.