Elastic modulus in the selection of interbody implants

There has been increasing interest in producing spinal implants which approximate the relative modulus of elasticity of the native bone above and below the levels to be fused. The elastic modulus, or Young’s modulus, is an inherent property of the material. The elastic modulus is the ratio of stress to strain and it can be used to assess a material’s stiffness (1,2). While there are many peer-reviewed journal articles that delve into the usage of different spinal implants (3,4), the authors are unaware of a single peer-reviewed surgical journal article where the elastic modulus was specifically measured as part of the data acquisition process. An assortment of book chapters and white papers reference assertions regarding the elastic modulus, made by manufacturers, with no source data provided. By evaluating the experiments performed in this paper, surgeons will be provided with objective data for use in surgical decision-making regarding the use of interbody implants in spinal surgery.

The use of spinal instrumentation has increased appreciably in the past decade (3). Recently, there has been a trend toward the use of “softer” implants, or implants which have a lower modulus of elasticity, in an attempt to utilize implants which have a similar stiffness to the bone with which they will interface (4). Among the scenarios where a “softer” implant is felt to be most beneficial, ventral surgery with a corpectomy is frequently considered. Following a ventral corpectomy, a spacer is placed to occupy the surgically-created defect and this spacer is seated under a compressive load.

Modulus mismatches may be responsible for the late complications which are observed to occur following ACDF surgery. Conditions which may arise, in the later postoperative period, following anterior cervical decompression and fusion (ACDF) surgery are: non-union or pseudarthrosis (possibly the result of stress shielding) (5-9); adjacent segment disease (possibly due to increased forces or stresses adjacent to the index fused segment) (6,10-13) and strut subsidence (possibly the result of a stiffer strut placed against a less stiff recipient bone) (14-16). We have evaluated the role of a mismatch in the modulus of elasticity between the implanted strut and the host bone at the index segment. This study will also evaluate the elastic modulus and the stiffness, in compression, of various materials used for a variety spinal interbody implants. The elastic modulus of the metal and PEEK implant materials will then be compared with the elastic modulus of cortical and cancellous bones.

Three samples of each metal (surgical titanium alloy, 316 L stainless steel, and cobalt-chromium) and five samples each of the poly-ether-ether-ketone (PEEK) materials [pure PEEK and carbon fiber reinforced PEEK (CFRP; 30% carbon, 70% PEEK)] were obtained for this study. Each of the implantable materials had the same dimensions (1 cm by 1 cm by 1 cm cubes). In addition, five samples each of cortical and cancellous bone were utilized. For the cancellous bone, cubes of identical size to the surgical implants were tested. Because of the difficulty in obtaining cortical bone samples of the same dimensions as that of the other materials as well as the need to use a perfect cube in order to accurately perform the modulus testing, the cortical bone samples were slightly smaller in volume (albeit identical in proportion—8 mm by 8 mm × 8 mm cubes). All materials tested in this study were provided by the DePuy Spine from their own supply manufacturing plant at our request.

Each sample cube was placed on an Instron Mechanical Test Frame 5500R materials testing device (Instron, Norwood, MA, USA) and assessed under pure compression at a rate of 2 mm/min. The maximum capacity of the load cell of the Instron 5500R machine is 45 kilonewtons (kN). The bone and PEEK materials yielded well before reaching the maximum load limit of the Instron 5500R device. The metals (titanium, stainless steel, and cobalt-chromium) did not yield at 45 kN. The testing was performed until the maximum limit of 45 kN, to obtain a load-displacement curve with the curve demonstrating the proportional limit, the elastic limit, and the breaking point of the material. Modulus values were reported for the load values obtained up until the Instron 5500R device reached maximum load capacity. Parameters such as load and displacement were recorded throughout the testing and plotted. The modulus of each material was calculated from the slope of the stress-strain curves. The statistical analysis was performed using SAS 9.0 software (SAS Institute Inc., Cary, NC, USA). Sample means were compared via analysis of variance (ANOVA) with post-hoc testing performed using Student-Newman-Keuls (SNK) method.

The elastic modulus can also be determined by calculating the slope from the stress-strain curves (17).

Stress versus strain curves were plotted for each material tested (Figure 1). The elastic modulus was calculated from the slope of the load-displacement curves (Figure 2). In reviewing the data for the measured modulus of elasticity, multiple observations were apparent. The modulus of pure PEEK [3.84 Gigapascals (GPa)] was similar to that of cancellous allograft bone (3.78 GPa, P=0.72). Likewise, the elastic modulus values for the CFRP specimens (17.94 GPa) were comparable to the cortical allograft bone (14.64 GPa). Due to the limitation of the Instron 5500R, the device was only able to quantify loads up to 45 kN. Each of the metallic implants had elastic modulus values greater than 50 GPa. These extremely high values for the modulus of each of the metallic implants, when compared to the allograft bones and the PEEK implants, are evident from the steep slopes of the stress-strain curves. The Young’s modulus is used to characterize a material’s stiffness. The higher the modulus, the more stiff the material. 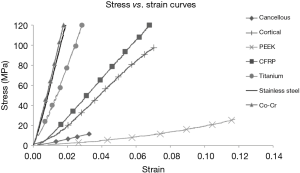 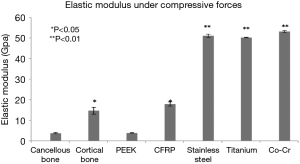 All values obtained for the metals were significantly different when compared to both the allograft bones and the PEEK products (Table 1). The softer materials (bones and PEEK products) were able to be tested beyond the yield point which resulted in specific values for the modulus of elasticity. The stiffer materials (metal products) did not yield at 45 kN, and as such, the modulus values were extrapolated from the slopes of the stress-strain curves. The data presented in the figures are the mean values ± standard error of the mean. These data, with very small error bars, demonstrate the consistent values obtained throughout the testing of each of the cubes. 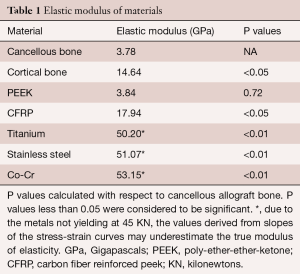 In surgeries performed for degenerative spinal conditions, one of the most common areas treated is the cervical spine. The goals of ACDF surgery are to decompress the neural elements, stabilize the index spinal segments, and promote a solid bony arthrodesis across the treated segment(s). In anterior cervical spine surgery, in the United States, the most common ventral strut supports utilized, after the decompression is completed, are structural allografts (17). However, due to a variety of problems with the use of allograft bone struts, interbody cages have been developed (18-20). In most practices today, spinal instrumentation is used to stabilize the treated segments internally. Presently, materials of an assortment of moduli (PEEK, CFRP, titanium, stainless steel, and cobalt-chromium) are used for manufacturing spinal interbody implants.

Pseudarthrosis, strut subsidence, and adjacent segment disease are three postoperative concerns which arise following ACDF surgery. These events typically occur months after the index surgical procedures are completed. The manner in which the stiffness of a surgical implant impacts its long-term success is not clear. Each of these late complications will be considered with the aim of identifying potential factors which could improve the long-term fusion/instrumentation success following spinal surgery. Currently, these issues are most readily apparent following anterior spinal surgery in the cervical region. The experience of the individual operating surgeon with implants of varying moduli will ultimately determine the surgeon’s choice of interbody implant.

Subsidence occurs in the cervical spine following ACDF surgeries (14,15). A mismatch in the modulus of elasticity between the implanted strut and the host bone, at the index segment, may be responsible for the development of subsidence. Use of metallic implants, with very high modulus of elasticity values, interposed between bony surfaces of much lower modulus, may lead to the implant penetrating into the inferior vertebra in a process called subsidence. In addition, from a technical surgical viewpoint, if the bony endplate is excessively removed, then even struts with lesser modulus values may subside into the inferior vertebra (16). In this study, the metals tested (titanium, stainless steel, and cobalt-chrome) had significantly higher moduli compared to the PEEK implants and the allograft bones. These results indicate that metal implants may create a significant modulus mismatch between the host bone and the implant.

Stress shielding occurs when the implanted strut does not feel a load. The forces are transmitted through the supporting spinal instrumentation which effectively bypasses the anteriorly placed strut (5). Wolff’s Law stipulates that too little loading will lead to bone resorption while higher loading will lead to bone formation while there is a normal range that results in maintenance without remodeling (9). Stiffer spinal implants, and implants which are fully constrained, are more likely to stress shield the bone graft within the index segment and potentially result in a pseudarthrosis (5-8). Each of the metallic implants tested in this study was significantly more stiff than bone, and as such, these metallic implants may result in stress shielding.

Adjacent segment disease in the cervical spine has been well documented. Hilibrand et al. followed a large series of patients for 10 years following ACDF surgery and determined the annual rate of developing adjacent segment disease to be approximately 3% (12). Difficulties related to adjacent segment degeneration have been widely reported in both clinical and biomechanical studies with fusion devices (6,10,11). This has been hypothesized to be the result of excessive stiffening of the index segment and/or a modulus mismatch between the implant and the surrounding bone. Implants with stiffness much greater than that of surrounding bone, such as those made of metals, have been shown to cause acceleration of the degenerative process at the untreated adjacent levels (13,21).

Many assumptions have been made over the past two decades based on the Young’s modulus of elasticity of surgical implants. This paper provides objective data which has not been previously available. Limitations of this study design may include variability in the orientation of bone during testing as well as device limits with the ability only to quantify loads up to 45 kN. Moreover, material alone is only one factor which may influence outcomes. Changes in geometry may alter bulk mechanical properties (e.g., porosity or complex three-dimensional shapes). Nevertheless, the data presented provide quantitative information with which the operating surgeon can make informed decisions with respect to the choice of bone graft and/or the choice of surgical implants.

Many factors weigh in to the surgeon’s choice of a particular interbody implant. The surgeon’s experience with a product, the patient’s bone density, and the mechanism by which stabilization is to be achieved (constrained, semi-constrained, or non-constrained constructs) all contribute to the choice of surgical implant. Modulus of elasticity data is one additional piece of information which may assist the surgeon in his or her choice of materials for use as a spacer as well as which materials to choose for the stabilization construct. This paper does not attempt to direct surgeons toward a particular choice of surgical implant material, it simply provides objective, quantifiable data to the surgeon that has not been previously described in the peer-reviewed surgical literature. Clinical studies will be required to determine the ideal modulus of elasticity for intervertebral spacers that will result in the best patient outcomes.

Ethical Statement: Not required as no protected health information was utilized.