Traumatic subaxial cervical luxations are typically produced by high-energy mechanisms and are associated with major spinal cord injury and mechanical instability. Cervicothoracic spondyloptosis or severe spondylolisthesis is an especially severe injury, usually with an easy diagnosis in the initial evaluation of a traumatic patient. Although there are cases reported of neurologically intact patients, the delay in the diagnosis is extremely rare (1,2). We present a case of a C7–T1 grade III spondylolisthesis identified 9 months after the traumatic event with mild progressive pyramidal symptoms in the lower limbs.

The initial management of these fractures is generally a cervical traction to achieve a closed reduction that may allow a subsequent spinal stabilization with an anterior, posterior or combined approach (1-12). Nevertheless, in the chronic spondyloptosis (4) or high grade spondylolisthesis the treatment of the patient became a challenge to achieve a correct spinal alignment avoiding the worsening of the neurological status.

A 33-year-old female, without other medical pathologies or neurological damages, was admitted to the emergency room after a road traffic collision. The initial neurological examination was normal. The cervical spine plain radiography, in which the cervicothoracic union was not well defined, was considered normal (Figure 1). The patient was discharged with mild cervical pain. The pain remained approximately 8 weeks after the accident but no more radiological exams were made. Progressive subjective mild motor weakness and numbness of the lower limbs appeared progressively six-seven later. Nine months after the accident she was evaluated by a neurologist. The exploration revealed brisk reflexes in her lower limbs and decreased sensation at level at C7; there were no objective motor deficits (ASIA score D). The cervicothoracic MRI and CT (Figures 2,3) showed a C7–T1 traumatic grade III spondylolisthesis, using the Meyerding scale, fracture of the T1 superior endplate and spinal cord signal change due to the compression of the T1 posterior body wall. 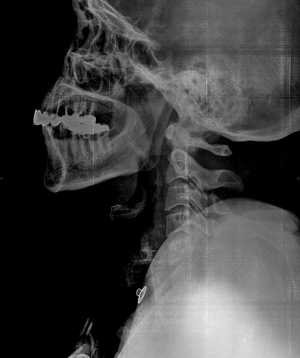 Figure 2 Cervical spine CT scan 9 months after the trauma: 3D reconstruction (A), axial (B) and sagittal (C) planes. It shows the bilateral C7–T1 subluxation and grade III spondylolisthesis and fracture of the superior plate of T1. 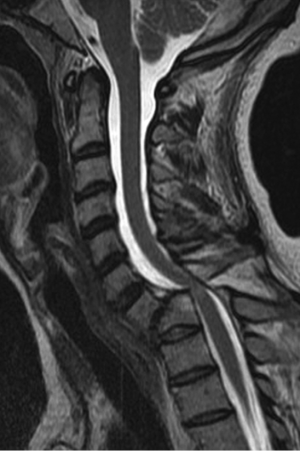 Figure 3 Sagittal T2-weighted MRI confirms spinal cord signal change at the level of the spondylolisthesis. Complete disruption of ligamentous complex is also identified in the image.

Initial closed 15 lb cervical traction was applied, but after 48 hours there was no reduction of the luxation. We planned the surgical treatment in two steps. Initially, we performed a posterior approach with continuous neurophysiologic control of long pathways. Using the hand-free technique, we placed lateral masses screws in C4–C6 and pedicular screws in T2–T3. After that, we performed transpedicular a partial T1 corpectomy and a laminectomy of T1 to allow the reduction of the luxation. During the realignment of the spine, we noticed a substantial decrease in the motor evoked potential of the patient’s lower limbs. This forced us to stop. However, the evoked potentials recovered completely to the initial baseline after few minutes. We decided to perform a subtotal realignment and to complete the arthrodesis in a second surgery. The postoperative examination of the patient was not revealed any neurological change and the patient was discharged carrying a Philadelphia orthesis.

Three weeks later, the second step was an anterior cervical approach, a C7–T1 discectomy and fusion with iliac crest graft and C5–T2 anterior cervical plate. During the surgery, we recorded no changes in the motor and somatosensorial potential of the patient’s lower limbs. The postoperative findings showed an objective neurological improvement in her lower limbs and transient C8 distribution pain in her left arm, with total recovery in 2 months. After 2 years of follow-up the patient leads a normal life, with a complete recovery of sensatory deficit, and the control plan X-ray (Figure 4) confirm the progressive osseous fusion. 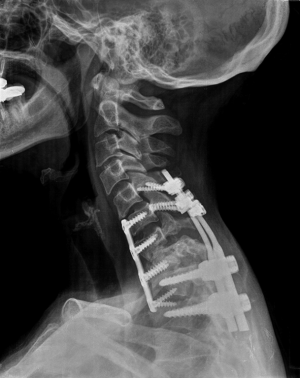 Figure 4 Lateral X-ray 6 months after the surgery shows an acceptable alignment of the cervical spine.

Spondyloptosis or severe spondylolisthesis is a rare and severe condition among cervical spine pathologies. The most frequent etiologies are congenital conditions and high-energy traumas. Traumatic spondylisthesis in the subaxial spine (C3–C7) is even more infrequent and is usually associated with severe neurological symptoms. Nevertheless, medical literature describes few cases of grade III or more subaxial spondylolisthesis presenting mild or no neurological deficit (Table 1) (1-3,6,7,10-12). Due to this, a delay in the diagnosis is possible. To the best of the authors’ knowledge, two cases with a delay in the diagnosis of C4–C5 and C5–C6 spondyloptosis have been described (1,2), but we are reporting the first case of C7–T1 grade III spondylolisthesis diagnosed 9 months after the initial trauma. 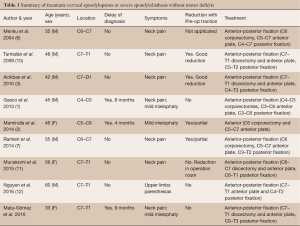 High grades spondylolisthesis is most commonly brought on by a hyperextension-flexion, however other accompanying mechanisms, such as rotational or lateral forces, could be involved in the initial trauma. These rotational forces might have had a significant role in the coronal translation of the fracture. There is a significant rupture of the ligaments in the extreme spondylolisthesis which may be associated with fractures of the lateral masses, laminae, pedicles or/and vertebral bodies. The enlargement of the spinal canal that causes these associated fractures has been considered the principal reason of absence of neurological deficits in previous publications (7,13,14).

The management of these injuries should be surgical. Some authors have reported good results with conservative treatment in cervical spondylolisthesis (9,10). However, due to the severe disruption of the osseoligamentous complex must be considered highly unstable injuries. The presence of mild neurological symptoms or their absence requires additional a careful and rapid treatment to prevent the initial deficit from worsening. The use of cervical traction to achieve a pre-operative alignment of the spine is useful in most cases, especially when the fracture is recent (1-4,7-10). Nevertheless, in chronic spondylolisthesis the realignment with cervical traction is usually impossible. This, as in our case, is probably due to locked facets and the fibrosis or pseudoarthrosis formation at the level of the fracture (1). Additionally, some authors (6) suggest that cervical traction may lead to an increase in the initial neurological damage, especially in neurological intact patients. However, traction with less than 20 lb during 3–10 days seems to be safe according to the previous literature.

The surgical treatment may be planned with either an anterior, posterior or combined approach. The choice of treatment depends on several factors such as the preoperative realignment of the cervical spine, the presence of traumatic disc herniation or the experience of the surgeon. The most accepted approach is the combined anterior and posterior 360º or 540º, with or without corpectomies. This approach provides wide canal decompression and successful cervical spine realignment (1-7,10-13). Additionally, the management of chronic spondylisthesis would have some considerations according to our experience. Despite the laminectomies and the transpedicle corpectomies, the maneuvers of realignment with intraoperative traction may lead to a significant decrease in the motor and somatosensorial evoked potentials. Gasco et al. (1) suggests the performance of anterior total corpectomies to increase the anatomical alignment in the case of chronic spondylisthesis, but in his report there is no mention in relation with the intraoperative evoked potentials changes. Thus, we decided to perform a subtotal reduction and an anterior-posterior fusion with iliac crest harvest. These findings suggest that if the neurological structures are in danger, it is preferable to perform a stable 360º fusion with wide decompression of the spinal cord rather than trying to obtain a complete spine alignment.

In conclusion, this case shows that a delay in the diagnosis of severe cervical subaxial spondylolisthesis or spondyloptosis may produce progressive neurological deficits and difficulties in the total surgical management of the fracture. The complete correction of the alignment of the cervical spine depends on the flexibility of the osteoligamentous structures and on the tolerance of the spinal cord to the reduction maneuvers. It is therefore essential for the medical team to carry out intraoperative monitoring of the spinal cord evoked potentials.