There have been only a few reports on the intraoperative monitoring of C5 nerve root to prevent paresis or palsy after cervical decompression procedures in particular laminoplasty for cervical myelopathy cases (1-4). Postoperative paresis of the upper extremities has been considered a common complication from cervical surgery (5). C5 palsy is defined as weakness of the deltoid or biceps brachii muscles after cervical decompression surgery (6-9). It has been reported that C5 palsy can occur as an early event or may often be delayed by a few days after the surgery (3). The possibility of detection of C5 nerve root injury with intraoperative monitoring is unclear (2,3). In their previous work, Yanase et al. investigated the utility of motor-evoked potential (MEP) recordings from upper limb muscles in patients who underwent laminoplasty for cervical myelopathy (3). They found deltoid muscle MEP not useful in detecting C5 irritation or injury. Another study by Fan et al. found real-time electromyographic activity of the deltoid and biceps muscles as well as transcranial motor evoked activity recorded from these muscles were useful to detect C5 palsy during surgery (1).

Our present prospective study aimed to clarify the utility of evoked responses to detect the C5 nerve root integrity outcome following posterior cervical laminectomy with or without instrumented fusion. We utilized multi-modality evoked responses including somatosensory (SSEP) and transcranial motor (TcMEP) evoked potentials as well as electromyography (EMG) activities from deltoid/biceps muscles in all our patient population.

One hundred consecutive patients who were scheduled to undergo cervical laminectomy/laminoplasty with (n=69) or without (n=31) instrumented fusion between 2010 to 2014 were enrolled in this study. Local IRB permit was obtained prior to the study. There were 56 men and 44 women, with an average age of 63±12 years. Among these, 35 cases were diagnosed as having cervical myeloradiculopathy, 5 cases of cervical kyphotic deformity, 53 cases of multi-level segmental cervical disc disease and stenosis, 2 cases of extra-dural cervical tumor, and 5 cases of cervical subluxation. All patients had signs or symptoms of cervical myelopathy and/or radiculopathy.

Balanced general anesthesia with low doses of inhalational agents combined with low-dose constant infusions of remifentanil (0.05 mcg/kg/min), propofol (50 mcg/kg/min), or dexmetomidine (0.003–0.005 mcg/kg/min), and non-depolarizing paralytic agent. The patients were initially paralyzed with a single dose of rocuronium (1 mg/kg) to facilitate intubation. No muscle relaxation was present at the time of testing.

During TcMEP stimulation, we utilized an isolated multipulse stimulator (TCS-1 model, Cadwell Laboratories, Inc., Kennewick, WA) which was interfaced with Cadwell Cascade evoked potential system . The TcMEPs was applied using two corkscrew subdermal needle electrodes, which were placed 1 cm anterior to C2 (anode) and C1 (cathode) locations (International 10-20 system of electrode placement). The stimulation was delivered with a train of 5 square wave pulses (50 µs time constant) while maintaining the ISI at 2 msec (500 Hz). Stimulation intensity started at 100 Volts and increased by 50 Volts increments. The lowest electrical intensity producing a robust muscle response with clear and reproducible amplitude was defined as the threshold stimulation.

The recording target muscles were abductor pollicis brevis (APB) and deltoid in the upper extremity and abductor halluces (AH) in the lower extremity. The TcMEPs from APB and AH muscles were primarily served as control recordings for motor activation. The EMGs were recorded by two needle EEG electrodes (Viasys Healthcare, Madison, WI, USA) placed into the muscle with the belly-tendon configuration.

Baseline SSEPs were elicited by the stimulation of the posterior tibial nerve (PTN) at the ankle or median nerve (MN) at the wrist region in all patients The short-latency cortical responses were recorded with needle electrodes places at C4/Fz and C3/Fz for MN stimulation and Cz/Fz for the PTN stimulation. The stimulation was delivered by alternating stimulating of the PTN or the MN sites utilizing biphasic 200 µsec square wave pulses at a rate of 2.82/sec and intensity of 25–35 mA. Two averages of 200 trials were obtained to stimulation of each nerve with a band pass of 10–500 Hz.

Spontaneous electromyography was monitored from deltoid and biceps muscles in all patients. Recordings of TcMEP and EMGs were made at four of four twitches during the laminectomy and segmental instrumentation.

Intraoperative evoked potentials were recorded in 100 patients. Intraoperative C5 nerve root EMG activity was detected in 34 cases (34%) of which 10 patients sustained repetitive C5 EMG activity lasting 5 or more minutes throughout the surgery. Interestingly, the paresis of the unilateral deltoid muscle developed in 5 (5%) of 100 patients immediately after their operation. All these patients had sustained neurotonic EMG discharge lasting more than 5 minutes. The post-operative deltoid weakness completely resolved within 7 days. No patient in our study developed C5 nerve root palsy without intraoperative EMG changes. In addition, none of the patients with weakness of deltoid muscle demonstrated any noticeable change in amplitude or latency of SSEPs or TcMEPs (Table 1). A typical SSEP and TcMEP recordings are demonstrated in Figure 1. 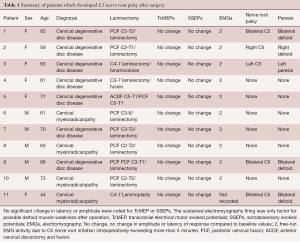 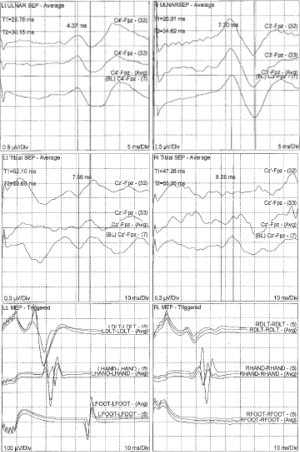 There are several hypotheses regarding the etiology of C5 palsy (9,10). Hasegawa et al. hypothesized that the palsy is caused by spinal cord damage during the surgical decompression procedure performed for chronic compressive cervical disorders (11). The C5 palsy is the paralysis of the deltoid and/or biceps brachii muscles after surgery without any deterioration of myelopathy symptoms. Period from surgery to onset of the C5 palsy can vary from immediate to 6 weeks after surgery (12). There has been high incidence of C5 palsy associated with posterior cervical fixation for ossification of posterior longitudinal ligament (13,14). According to Komagata et al., bilateral partial foraminotomy was effective in preventing C5 palsy (15). Using transcranial motor evoked potential (MEPs) monitoring, Tanaka et al. did not observe any abnormalities, even in those patients who developed postoperative transient C5 palsy. Their results suggest that development of postoperative C5 palsy after cervical laminoplasty was not associated with intraoperative injury of the nerve root or the spinal cord (2).

Imagama et al. reviewed 1,858 patients who had undergone a cervical laminoplasty and identified 43 (2.3%) who developed C5 palsy (16). The clinical features and radiological findings of patients with and without C5 palsy were compared. CT scanning of involved patients revealed a significant narrowing of the intervertebral foramen of C5. On MRI, the posterior shift of the spinal cord at C4–5 was significantly greater in this group.

In another series, Dai et al., 1998 retrospectively reviewed 287 patients with cervical compression myelopathy who were treated by multi-level cervical laminectomy and identified 37 cases (12.9%) with postoperative radiculopathy. The radiculopathy was observed from 4 hours to 6 days after surgery. The most frequent pattern of paralysis was involvement of the C5 and C6 roots (8).

The spinal cord had a tendency to be shifted more posteriorly at 24 hours than 2 weeks after cervical laminoplasty. This suggests that C5 palsy may be prevented if the expansion of dura matter, which is strongly correlated with the posterior shift, can be controlled (10).

The review of the literature points to the fact that available neurophysiological monitoring such as mixed nerve SSEPs or TcMEPs are insensitive to detecting single nerve root injury (2). However, Fan et al. advocate use of deltoid TcMEP and real time EMG whenever there is potential for iatrogenic C5 nerve root injury (1). In our patient population, the analysis of the latency and amplitude of deltoid muscle TcMEP demonstrated no significant change in the group of patients which sustained C5 injury. The recordings of the deltoid muscle TcMEP was not sensitive because of possible overlapping nerve root innervation. The recordings of the deltoid activity using real-time EMG were clearly sensitive to C5 nerve root irritation. However only 5 out of 10 cases which sustained an ongoing muscle activity developed paresis of the deltoid muscle. In conclusion, amongst all intraoperative monitoring methods, only real-time EMG recordings demonstrate irritation or possible injury to the C5 nerve root and sustained activity during surgery should be regarded as a warning sign to possible postoperative C5 palsy.