Spinal ependymomas are rare tumors, with an incidence of approximately 0.2/100,000 population with a slight male predominance. Approximately 0.5% of all ependymomas are classified as myxopapillary, thus having an incidence of 0.01 per million population (1,2). No specific risk factors for the development of ependymoma have been identified, although associations with neurofibromatosis type 2 and lack of maternal consumption of prenatal vitamins have been suggested (3). The prognosis for World Health Organization (WHO) grade I ependymoma, of which, MPE is a sub-type, is very good. The 1-year and 10-year survival rates for WHO Grade I ependymoma are 100% and 93% respectively (3).

The patient had previously undergone lumbar spine surgery 1 year ago for complaints of low back pain and weakness of bilateral lower limbs. The patient had undergone a T12–L1 laminectomy with excision of a conus intradural extramedullary tumor at L1–L2 level (Figure 1). Patient had no associated symptoms of bowel or bladder dysfunction at this time. Tumor HPE was suggestive of a Myxopapillary ependymoma (Figure 2). Operative notes suggested, a subtotal resection of the tumor was done owing to the adherence of tumor to the cauda equina roots. A post-operative magnetic resonance imaging (MRI) scan dorso lumbar spine was performed after 1 month which showed an irregular heterogeneously enhancing intradural mass lesion extending from T12–L1 level to L1–L2 level. Lesion was involving the filum terminale and cauda equina roots (Figure 3). 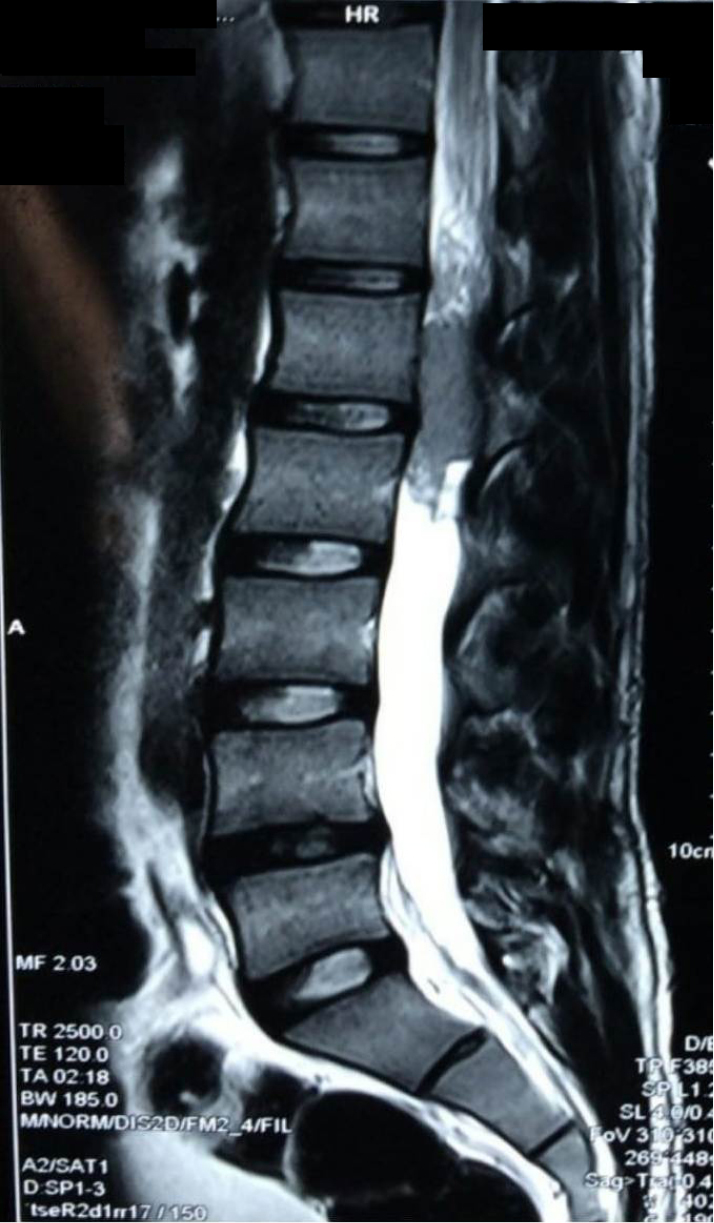 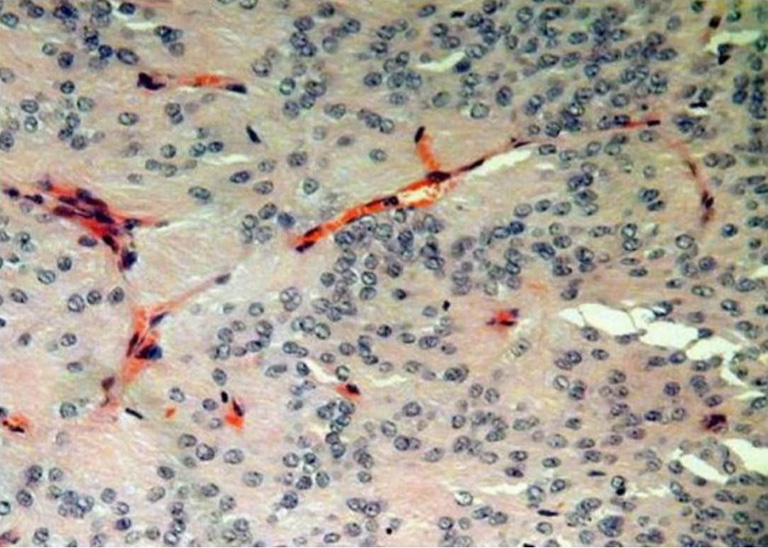 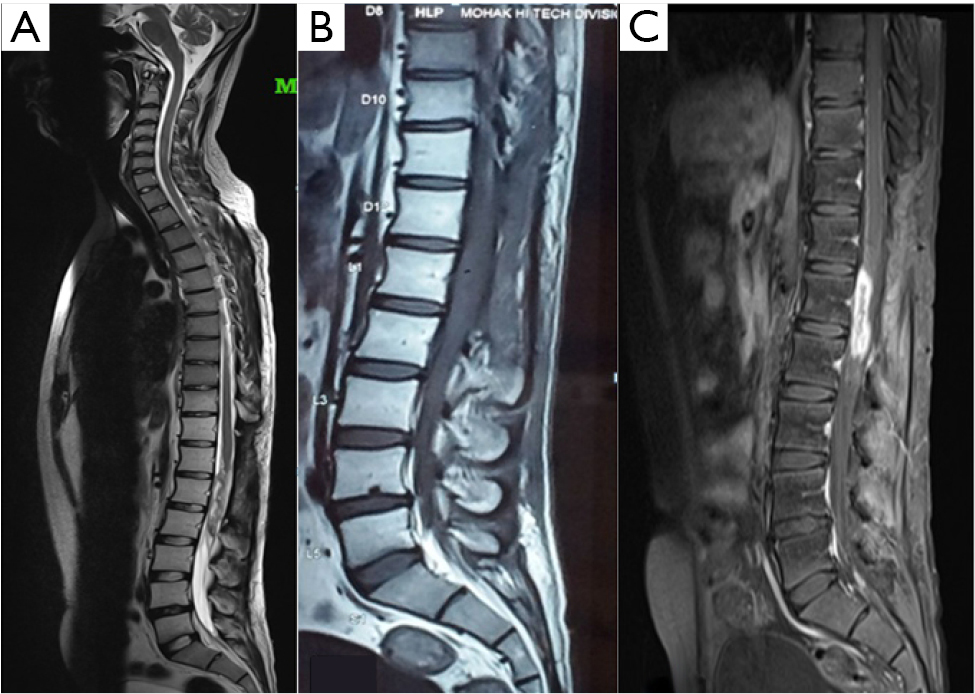 Postoperative radiotherapy for residual tumor was planned. Patient was referred to radiation oncology for adjuvant radiotherapy. A treatment plan offering best therapeutic benefit both in terms of optimum dose to target tissue and maximum sparing of the uninvolved organs was selected. Patient was given a total of 54 Gy over 30 cycles (45 Gy/25# to PTV and 9 Gy/5# to the PTV1) on DMX Varian Linear Accelerator. The patient tolerated the adjuvant radiotherapy well and noticed a marked improvement of pain and weakness symptoms 1 month after the radiotherapy. Follow up scans were done 1 month and 6 months after radiotherapy. A small residual lesion was visualized at T12-L1 level on both the scans. However, there was no evidence of any new lesions in the spinal cord. Patient had an improvement in the low back pain and the lower limb paresis after radiation therapy. However, 8 months after radiation therapy, the patient started experiencing low back pain and the lower limb paresis symptoms associated with signs & symptoms of cauda equina syndrome.

MRI showed an irregular enhancing intradural mass lesion along anterior aspect of lower cord and conus extending from T12–L1 level up to the L2 mid vertebral body level. Patient also had an irregular enhancing lesion within spinal canal from L4 to S2 level consistent with drop metastasis (Figure 4). This new lesion developed far below the anatomical location of previous tumor. This lesion was seen extending to epidural space with involvement of the posterior body of L4, L5 S1 & S2 vertebra. Patient underwent re-exploration, a T11–L3 laminectomy was done with debulking of tumor. Gross total resection was not possible owing to dense adhesion of tumor capsule with surrounding lumbosacral nerve roots. Dural closure was done with macroscopic tumor still present. HPE was suggestive of myxopapillary ependymoma, similar to previously resected tumor. 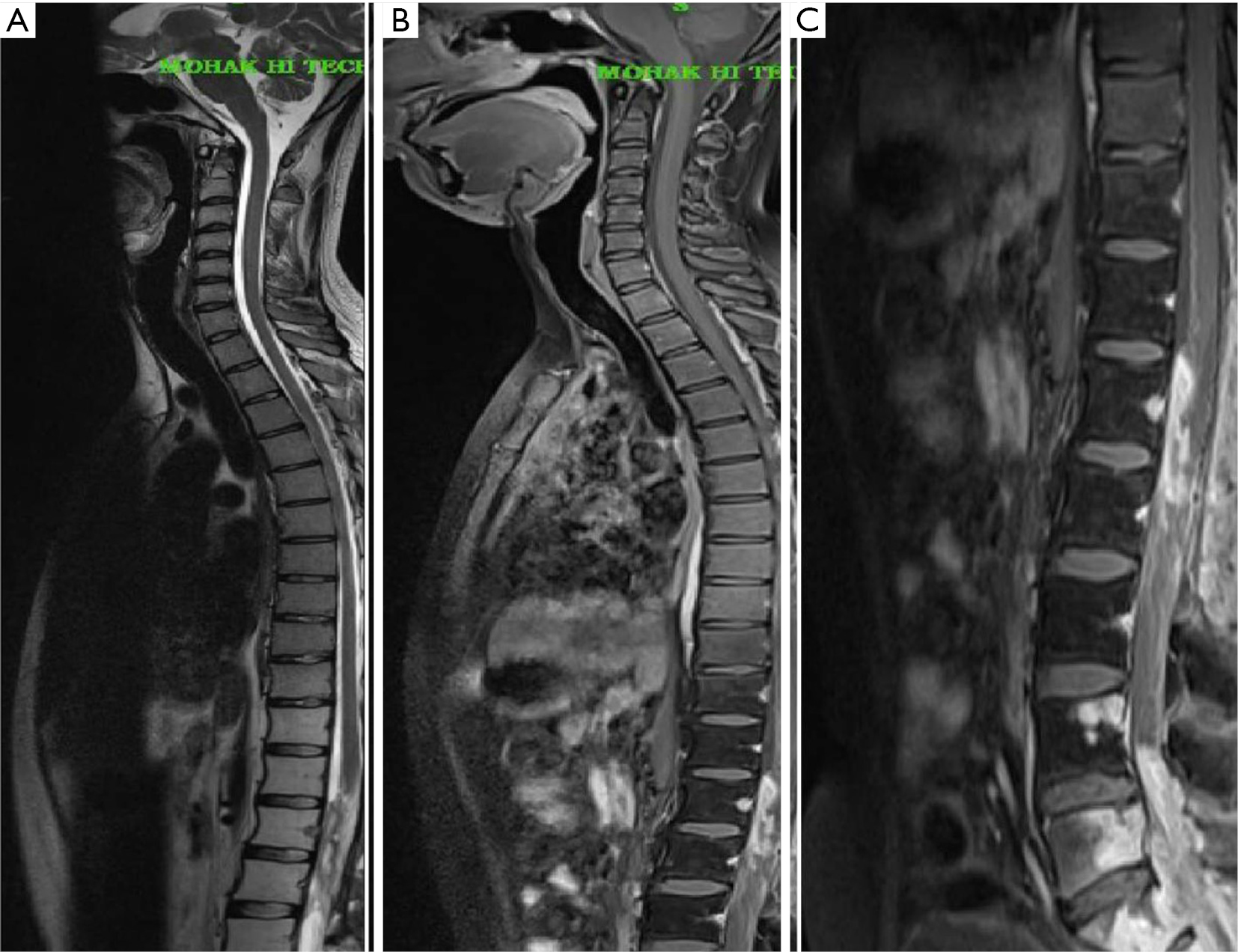 Patient duly received a radiation oncology referral post operatively and was taken up for local re irradiation of residual tumor. Patient received a total of 54 Gy over 30 cycles (45 Gy/25# to PTV and 9 Gy/5# to the PTV1) on DMX Varian Linear Accelerator.

Patient had a Nurick Grade 4 (Difficulty in walking needing assistance) prior to radiation therapy which improved to Nurick Grade 3 (Difficulty in walking not needing regular assistance) with no improvement in bladder dysfunction symptoms. The patient had a gradual worsening in motor power 6 months after radiotherapy with worsening of low back pain. 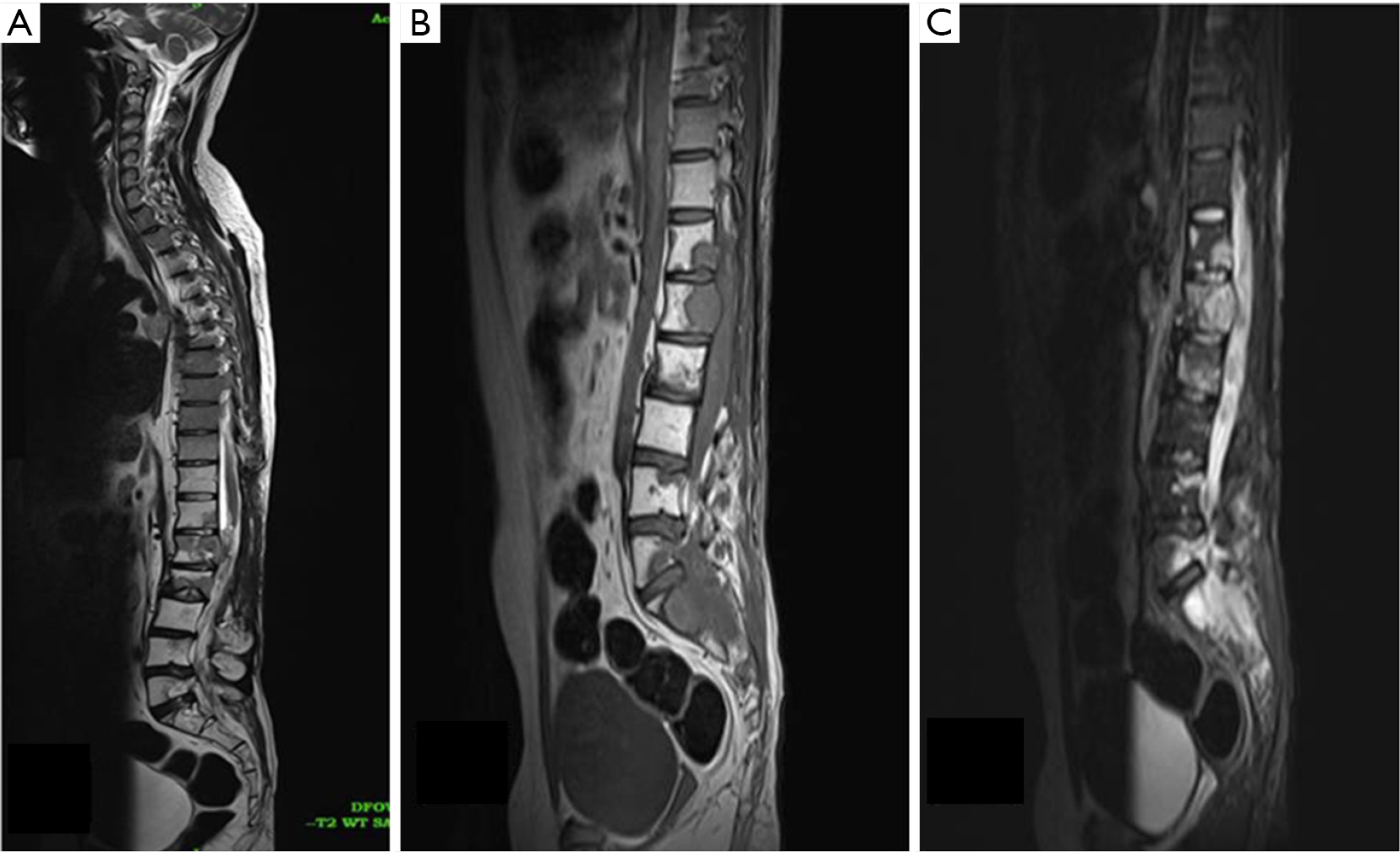 Ependymoma is an uncommon central nervous system neoplasm, usually seen in children and young adults. Myxopapillary ependymoma (MPE) was first described as a variant of ependymoma by Kernohan in 1932 (4). MPE is usually located in the cauda equina and filum terminale regions, and characterized by the production of mucin and formation of papillae. Cauda equina MPEs are assumed to arise from the ependymal cell nests normally present in the filum terminale. The reason for the myxopapillary appearance is not well understood; ultra structural evidence shows that the myxoid material represents excess basement membrane material deposition around the tumor cells induced by the abnormal juxtaposition of collagen that abuts directly onto ependymal cells in the normal filum terminale. MPE is a slow-glowing tumor and is designated histologically as grade I neoplasm according to the 2007 World Health Organization classification (1).

Pathologically there are four types of ependymomas, namely: typical, anaplastic, subependymoma and myxopapillary. Among these, mainly anaplastic ependymomas are known to spread to multiple sites in the spine and cranial cavity (5,6). Rare cases of tumor spread from the spine retrograde to the cranium and extraneural spread to liver and lungs from the spine have been reported in literature (7). Peripheral metastasis has also been described, including one case of local tumor reoccurrence forty years after initial therapy with concomitant metastases in the lungs, liver, and lymph nodes (7).

Single institution retrospective studies suggest, younger age, high tumor grade and failure to achieve GTR are poor prognostic factors for patients with ependymoma (2,8). However larger population based study from the surveillance, epidemiology, end results database suggested that older age rather than younger age group was associated with a poorer prognosis (9). Recent investigations have started focusing on newer pathologic and immunohistochemical markers of prognosis. A study has shown increased mitotic index, increased cellularity, presence of Ki-67, and presence of cyclin D1 as independent markers of mortality in ependymomas (10). However, no such studies have focused solely on MPE. The most common presenting symptoms of spinal MPE include pain, weakness, and sensory changes. Symptoms of bowel, bladder, and/or sexual dysfunction may be seen depending on the tumor location. MPE is a benign tumor but has various growth patterns and metastatic modes. Metastatic spread of MPE is infrequent and, when it does occur, the disease tends to spread in the rostral direction within the central nervous system (11). Intracranial metastasis is the most common site for MPE spread. A recent review described 19 such cases and found a variety of intracranial sites involved including the telencephalon, the brainstem, and the cerebellum. The time span to presentation of metastasis also varied wildly, from 1 month to 13 years following primary tumor resection in one series (12). Previously published reports of drop metastases in patients with MPE are scarce. Reports mention cases where drop metastases were discovered simultaneously with the primary tumor (13,14). Metastases have been reported up to 20 years after initial treatment, emphasizing the role for extremely long-term follow up in patients treated for MPE (15).

One case reported drop metastases from a T11-L2 primary MPE to the distal thecal sac, similar to the patient reported here. However this patient was a 13 year old girl and the metastasis was found on the initial MRI scan (1). An additional case report describes a 22-year-old man who presented with MPE lesions in the third ventricle and sacral spinal canal; he was hypothesized to have a drop metastasis by the authors, though both lesions were again found simultaneously (13). There has been only one previously reported case where an adult patient presented with secondary MPE drop metastases following an initial subtotal resection and post-operative radiotherapy of the tumor bed of a primary MPE similar to our case (16). To our knowledge this is the only reported case in literature of a MPE with interval drop metastasis presenting as cauda equina syndrome.

The various cases mentioned in the recent literature suggest a higher incidence of CNS dissemination of MPEs than previously thought. This holds true at the time of diagnosis and during the subsequent follow up. Screening of the entire CNS axis at the time of diagnosis and during follow up is recommended. The limited data on treatment of MPE indicates, radiotherapy is efficacious for residual tumor following subtotal resection and for metastatic disease. Long-term survival has been documented in MPE patients though continued follow up is warranted to look for interval metastasis.