A 72 year-old female patient presented to our hospital with acute progressive tetraparesis for five hours with emphasis on the upper extremities. The patient reported that she had suffered a sudden lancinating interscapular pain with radiation in both arms after a long period of kitchen work with flexed head. Her symptoms then progressed to asymmetrical weakness and sensory disturbance in both arms, so that she was admitted to our department. Her previous history includes hypertension and arthrosis.

Neurological examination revealed mild weakness of the upper arms (4/5 Medical Research Council Scale) associated with bilateral dysesthesia as well as left-sided hyperalgesia and disturbed thermal perception. The gait was slightly ataxic. In the course of diagnostics she developed mild hyperreflexia on the upper limbs and Babinsky sign on both sides. 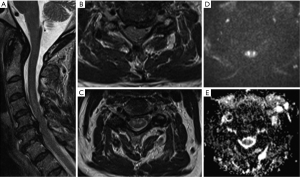 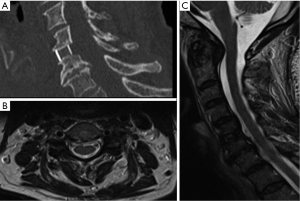 We hypothesized that our patient developed an anterior spinal artery syndrome which was likely caused by compression due to a disc herniation.

Spinal cord ischemia is a rare disease and usually located in the anterior spinal artery territory (4). The diagnostic modalities of this condition are still not standardized. Common MRI changes are described as “pencil-like” hyperintensity in T2WI with cord enlargement as well as contrast enhancement (1). However, in the acute phase these abnormalities might be missing (4). Weidauer et al. reported only 45% of the patients with acute spinal cord ischemia to have signal intensity changes on T2W images (5). Thus, the role of DWI and time course of the changes are still of major interest in spinal cord ischemia. Spinal DWI is technically more demanding than cranial DWI and is therefore not routinely used. As a consequence, the available literature includes one case report from Gass et al. [2000] and few small series of patients (1). A recent case report from Reynolds et al. also confirmed the usefulness of DWI in detecting ischemia of the thoracic spinal (6).

DWI changes in case of spinal ischemia have been reported to be detectable after a minimum of 3 to 4 hours after onset of symptoms; normalizing period has been described heterogeneously after approximately 7 to 28 days (7). Interestingly, apparent diffusion coefficient (ADC) values tend to be significantly lower in comparison to inflammatory myelopathies (8), so that ischemia can be differentiated from inflammation by MRI. It has been reported that after DWI normalization chronic spinal ischemia shows mostly atrophy of spinal cord and persisting T2WI hyperintensity (7).

In our case the neurological symptoms of our patient fit the anterior spinal artery territory with tetraparesis and dissociated sensation deficits with a loss of temperature and pain sensation. MRI (12 hours after symptom onset) demonstrated “pencil-like” hyperintensity in T2WI with contrast enhancement. DWI showed restricted diffusion of the central gray matter as reported in the literature. In the CT-A the anterior spinal artery could be demonstrated with proper continuity. As laboratory parameters, including lumbar puncture, did not reveal any abnormalities suggesting an underlying inflammatory condition, we assumed cervical disc herniation as an underlying cause of spinal cord ischemia due to temporary compromise of vascular supply. The fact that our patient worked for quite a long time with flexed head in the kitchen at symptom onset might suggest a temporary compression of the arterial branches on the anterior surface of the spinal cord by the disc herniation, which was severe enough to cause hypoperfusion in the spinal cord. Normalization of DWI signal after surgery without signal abnormalities suggesting chronic ischemia such as atrophy or permanent T2 hyperintensity may be accounted as confirmation for temporary ischemia.

The rare existing previous reports of disc herniations and coexisting cervical or thoracic spinal cord ischemia do not describe treatment of the disc herniation by operative decompression due to evidence of cord ischemia (2,3,6). Due to the sudden symptom onset with incomplete tetraparesis, we assumed that symptoms could be attributed to cord ischemia by cord compression from the disc herniation. We therefore performed emergency decompression by anterior cervical disc removal and fusion. The patient recovered quickly after surgery. No symptoms remained after 2 months. One may argue that our patient would also have recovered without surgery, but considering the risk of recurrent ischemia and the duration of long conservative therapy associated with longer hospitalization, we think that surgery is a considerable therapy option.

In conclusion, our patient suffered from the clinical signs of an anterior spinal artery syndrome, most probably caused by compression due to a disc herniation. The symptoms resolved completely after ACDF at the respective level. We recommend the consideration of surgical treatment in such cases instead of observation.