Neurotropic melanoma (NM) is a rare variant of cutaneous melanoma with a high incidence of local recurrence and low rate of distant metastases. It often displays desmoplasia. Desmoplastic NM is a well-described neurotropic subtype of desmoplastic melanoma (DM). Neurotropism describes direct invasion into neural structures (intraneural), surrounding nerve (perineural) infiltration or cells exhibiting neural or nerve sheath differentiation. Neurotropism can be associated with worse prognosis in melanoma due to its propensity for deep invasion at the primary site and potential for positive margins at the excision site due to neural extension. NM has a higher local recurrence rate when treated with surgical excision alone. Regional, nodal, and distant metastatic disease rates are lower than with other forms of cutaneous melanoma (1,2).

We present an extremely rare presentation of a case of neurotropic cutaneous malignant melanoma with contiguous spread to spinal cord. To our knowledge, this is the first case report of NM with contiguous spread to spinal cord. This paper reviews current literature regarding this rare melanoma variant, describing its defining characteristics, exploring the diagnostic challenges, current therapeutic approach, and future treatment and research directions.

A 73-year-old male on the background history of hemochromatosis and cutaneous neurofibromas presented with 2 months history of progressive worsening neck, bilateral shoulders and upper back pain. He also complained of one-week history of right upper and lower limb weakness with paresthesia and poor mobility.

Examination: on admission his power was 4/5 in the right upper and lower limbs and deteriorated to 3/5 proximally and 4/5 distally in both upper and lower limbs. Palpable hard subcutaneous lump in the right posterior triangle of neck with thinning of the overlying skin was found. He developed myelopathic features with urinary retention and bowel incontinence. He also developed dysphonia and dysphagia due to involvement of lower cranial nerves.

Management: he deteriorated rapidly with progression of his weakness with loss of bowel and bladder control. He also developed swallowing difficulty with hoarse husky voice and underwent urgent posterior cervical decompression and resection of the intramedullary cervical spinal cord tumor (Figure 3A).

Outcome: patient recovered well with marginal improvement of his strength as well as bulbar function. Due to extensive nature of the disease, advanced age and involvement of spinal cord, palliative chemotherapy was considered as an option. Patient and family refused further treatment and palliative care was instituted.

DM is an uncommonly encountered type of malignant melanoma, first described by Conley et al. in 1971 as an invasive melanoma composed of spindle cells surrounded by abundant collagen. Subsequently, Reed and Leonard extended this definition to include NM as a variant of DM that showed neurotropism or underwent neural differentiation (3).

The presence of neurotropism is associated with increased risk of local recurrence and may, in some cases, be treated by wider excision margins and/or adjuvant radiotherapy. These tumors can be a diagnostic dilemma with a variety of morphological, histopathological, and immunophenotypic expressions.

Due to rarity of the disease, there is limited epidemiological data or descriptions of the natural history of NM. NM provides a diagnostic challenge as it presents differently to other melanomas, often as slow-growing, painless, innocuous-appearing amelanotic lesions (Figure 3B), leading to misdiagnosis and/or late diagnosis with associated poorer prognosis. Lesions may be discrete discoid papule, nondescript plaque, and thickening or nodular and ulcerative in nature (Figure 3C). The benign appearance may lead to insufficient initial excision margins. Cases of NM reported in the literature have been exclusively Caucasian. Approximately two-thirds of cases are male, which is a larger percentage than with conventional melanoma. The ratio of male to female is even higher in those who undergo radiotherapy; suggesting males have more advanced disease at presentation. Presentation is most common in the seventh decade of life. This is older for other forms of cutaneous melanoma (median age of 46 years).

Over half of desmoplastic NM lesions are located on the head and neck. This is compared with 19% for other melanomas. The location of lesions on the head or neck has been associated with poorer outcomes. Sun exposure is a risk factor for NM.

Distant NM metastatic disease is uncommon compared with other forms of melanoma. The site of initial metastatic spread is more commonly the central nervous system (CNS) for NM than for melanomas that do not demonstrate neurotropism. Lung is being the most common site for metastasis. Other metastatic sites include brain, liver, skin, and bone (4).

Neural extension or invasion can occur along large or small nerves, including cranial nerves, most commonly the facial and trigeminal nerves. Extended latent periods can exist between initial diagnosis and neural involvement that usually presents as a symptomatic neuropathy (5). Presentation may include cranial nerve palsies, pain, numbness, difficulty with mastication, associated atrophy of jaw muscles, and the absence of corneal reflexes. Extensive neural spread can make cure difficult (6).

Presence of neurotropism within a melanoma is an independent risk factor for local recurrence. Local recurrence rate of 20% for NM has been reported occurring sooner than melanoma (7).

The histopathological appearance is characteristically slender, hyperchromatic spindle cells and nuclei with mild to moderate amounts of cytological atypia, with or without neuroid differentiation. Neurotropic extension of spindle cells circumferentially around dermal nerves or thickened nerve tissue with abnormal cells in deeper tissue layers is distinct (Figure 4) (8). 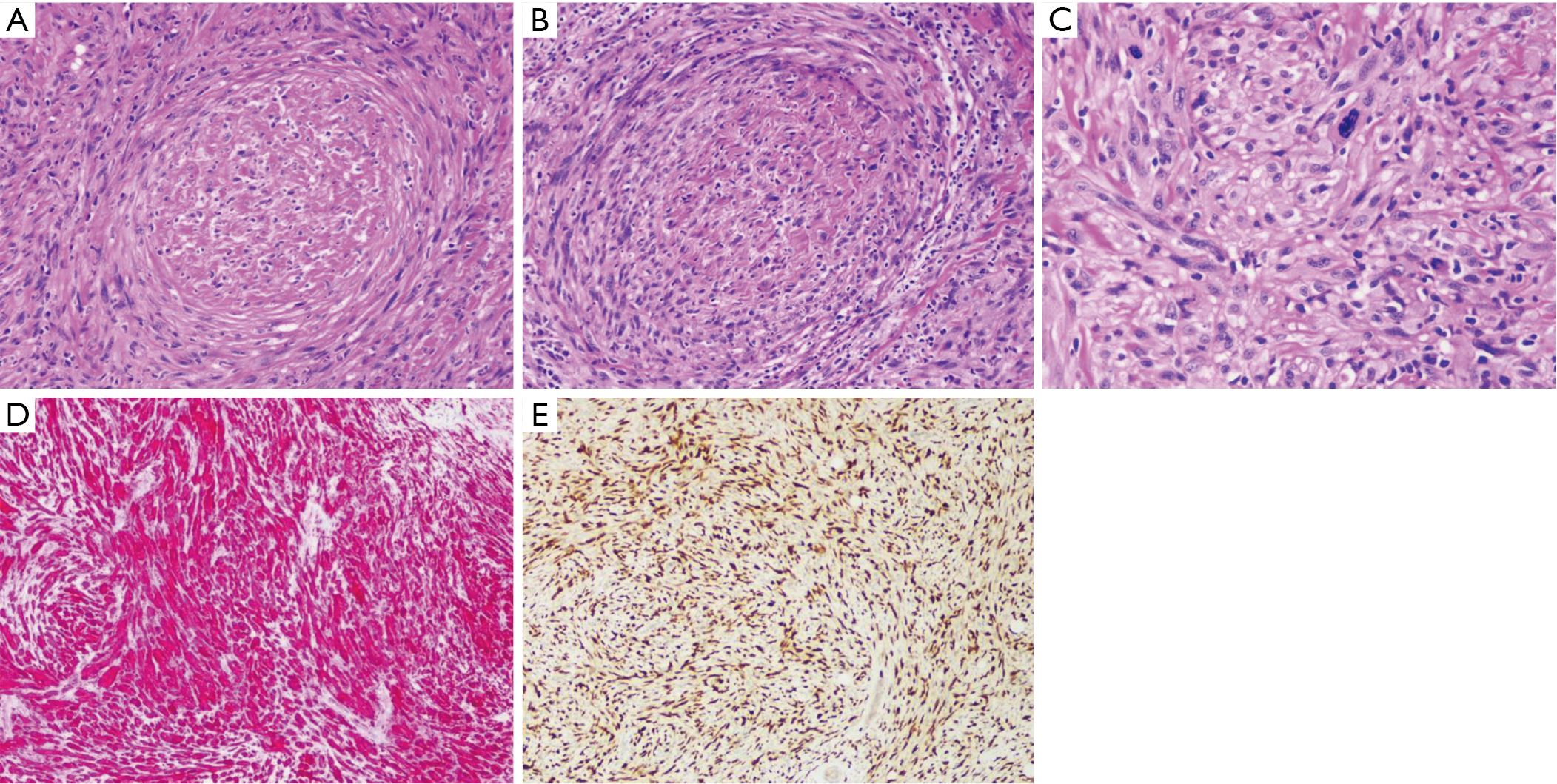 Melanomas with neurotropism usually have a high Breslow thickness and advanced Clark’s level (IV or V) at the time of presentation compared to other melanomas. NM is almost uniformly positive for vimentin and S-100 and less commonly positive for other melanocytic markers such as HMB-45, Melan-A, NKIC3, and Leu-7. S-100 is common in neural tissue including neural tumors, chondrocytes, lipocytes, and dendritic cells which also can impede diagnosis (Figure 4D). However, benefit may be conveyed in staining margins of resected lesions with S-100 to assess for adequate resection to assess the extent of invasion (9).

There are currently no specific genetic assays for NM. However, frequent allelic loss at the neurofibromatosis type 1 (NF1) gene locus and high prevalence of basic fibroblast growth factor (bFGF) in cell nuclei offers potential of genetic assays and possible targeted gene therapy in the future.

Poor prognosis in NM is associated with age, male gender, and head and neck locations of primary lesions, high Breslow thickness, close (<1 cm) or positive surgical margins. These are also the predictors of local recurrence.

Perineural invasion into large nerves confers a poor prognosis, often altering the goal of treatment from cure to palliation. Untreated patients with intracranial metastases with neurological symptoms have a median survival of one month. Intracranial disease treated with radiotherapy can greatly extend median survival of patients by more than 8 months.

Depending on the size, site, and level of suspicion of a lesion, it may be initially biopsied or completely excised. However, once a diagnosis of NM is made, prompt wide local excision (WLE) with clear margins is the definitive management. A minimum margin of 2 cm is recommended for NM to decrease the risk of local recurrence. Deep margins should include the fascia due to the invasive nature of the disease (10).

The low incidence of nodal metastatic spread has meant that regional lymph node sampling and dissection are not routine when lesions are excised. A tumor that has already demonstrated perineural spread, either on imaging or with symptomatic neuropathy, may be unsuitable for definitive surgery and may require palliative radiotherapy or chemotherapy.

Adjuvant radiotherapy after surgery is often considered particularly in “high-risk” regions like the head and neck where wide surgical margins are difficult to achieve. Currently, radiotherapy is considered in the postoperative setting for recurrent lesions or where margins are positive or deemed inadequate. Radiotherapy as definitive treatment for inoperable disease has been shown to provide local control of disease. In many cases, however, those with inoperable disease are incurable and radiotherapy is effective in the palliation of these patients.

Neurotropic cutaneous malignant melanoma is a rare but locally aggressive variant of melanoma. These tumors can be difficult to recognize clinically and pathologically, with poor results if not adequately treated primarily. These tumours rarely metastasize but have a tendency to reoccur locally. This is the first-ever case report of NM with contiguous spread to spinal cord with resultant myelopathy and neuropathies. A prompt diagnosis with early surgical resection is of paramount importance to avoid deep spread and poor outcome.

We acknowledge Dr. Francis Lee for collecting histological slides for preparation of this case report.

Informed Consent: Written consent was obtained from the patient for publication in this case report and any accompanying images. A copy of the written consent is available for review by the Editor-in-Chief of this journal.