Lumbar disc herniation arises when the annulus fibrosus of the vertebral disc fails, thus allowing displacement of the nucleus pulposus and other tissue. The term far lateral is used variably in the literature and usually refers to an extraforaminal displacement in the peridiscal zone peripheral to the sagittal plane of the most lateral part of the pedicle at the same level (1,2). Approximately 7% of herniations of lumbar discs have been reported to be far lateral (3), most commonly at L4/5 and relatively more frequently in the elderly (4). Indications for surgery in the presence of far lateral disc herniation include single-level radiculopathy, sciatica, numbness in the ipsilateral lower limb, and motor disturbance of the lower limb. Contraindications include pathology within the spinal canal and spondylolisthesis (1,5).

Non-surgical treatments of far lateral disc herniation include physical therapy, anti-inflammatory medication, and corticosteroid injections (6). Where these conservative measures fail, surgical intervention may be required. This surgery can be challenging because the standard surgical approaches to the other more common lumbar herniations are not readily transferrable to far lateral herniations because the lamina impedes access to the disc if a posterior approach is used. Several surgical techniques for the treatment of far lateral herniations have been investigated, including total or medial facetectomy, laminectomy, hemilaminectomy, approaches through the pars interarticularis, and lateral approaches between the transverse processes via the intertransverse muscle and ligament (4-6). Recent attempts to improve outcomes with less invasive surgery include laparoscopy, retroperitoneoscopy, and modified microendoscopic discectomy (1,6-11). A contralateral interlaminar approach traversing the spinal canal has also been described (12).

Our far lateral microdiscectomy technique involves accessing the nerve root lateral to the foramen through a small paramedian incision and use of an operating microscope (Figure 1). Far lateral microdiscectomy offers the prospect of better long-term results than other surgical techniques because of less extensive muscle dissection and preservation of the integrity of the facet joint. It also provides a more direct route to the pathology and allows better exposure than endoscopic techniques. It has limited applicability at the L5/S1 level because of obstruction by the iliac crests (14). Potential complications, as with other approaches, include damage to the root at the level of surgery, dural tear, residual sequestered disc, leakage of cerebrospinal fluid and neuropathic limb pain attributed to manipulation of the dorsal root ganglion (1,15,16). 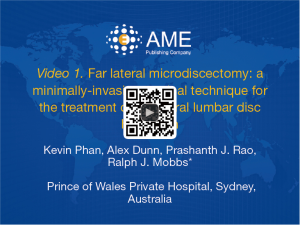 The patient is anesthetized and positioned on a Wilson frame, Jackson spine table, or a 90/90 Andrews frame. X-ray fluoroscopy is then used to identify the anatomy. A 2-cm paramedian incision is made (Figure 2), the distance from the midline having been determined by the preoperative imaging. A microscope or loupe/headlight combination is used to identify the anatomy including the medial aspect of the transverse process, lateral aspect of the pars interarticularis, inferior articular facet, superior articular facet, and facet joint line (Figure 3A).

Figure 2 A 2-cm paramedian incision is made lateral to the midline to access the herniation from outside the spinal canal.

Figure 3 Intraoperative anatomy under the microscope. (A) After the initial paramedian incision is made, the anatomy is identified; (B) after haemostasis is achieved, and the ligamentum flavum and facet joint capsule are cleared from the lateral aspect of the foramen, the nerve-disc interface can be clearly identified.

The lateral facet of the foramen is palpated and enlarged using a high speed burr, and ongoing hemostasis is secured. The exiting nerve root is then exposed by using a Kerrison upcut rongeur to remove part of the ligamentum flavum and facet joint capsule. A nerve hook is used to palpate the inferior aspect of the pedicle and the superior and inferior aspects of the exiting nerve. Hemostasis over the disc fragment is then achieved to clearly reveal the nerve-disc interface (Figure 3B).

Using a micro-blade, an annulotomy is created to provide an opening through which a nerve hook can be inserted to dissect the underlying disc fragment. A micro-pituitary rongeur is used to resect the disc fragments. The inferior, superior and foraminal aspects of the nerve are then palpated using a nerve hook to ensure there are no further fragments.

Often patients with symptomatic far lateral lumbar disc herniation respond to non-operative treatments (5,6,17). In the cases where this fails, surgical intervention may be required. Traditional techniques include laminectomy, hemilaminectomy, hemilaminoarthrectomy, and facetectomy (6). The advantages of the far lateral microdiscectomy approach include a reduction in postoperative muscle pain by avoiding the midline muscle dissection, minimal bone resection, preservation of the integrity of the facet joint, and providing a more direct route to the pathology. However, it has limited applicability to L5-S1 due to obstruction by the iliac crest, and it can be technically challenging due to the unfamiliar anatomical orientation (1).

Epimenio et al. reported forty-six patients with pure extraforaminal herniation who were treated using far lateral microdiscectomy by using a lateral approach with a 3–4 cm paramedian incision. This technique does not require bone resection, and reduces muscle retraction. All patients were discharged within two days of surgery and returned to work with no radicular or lower back pain. Eight patients exhibited residual lower back discomfort and moderate hypesthesia. No complications were reported (18).

Quaglietta et al. reported the use of a paramedian muscle-splitting intertransverse technique on forty-two patients with far lateral disc herniation; most commonly with the L4/5 disc. They emphasize that this technique improves visualization of the disc and nerve root, does not rely on bone resection, and reduces soft tissue damage. The average surgery time was 55 min and patients were discharged within two days. Of the twenty-five patients that exhibited sensory problems prior to surgery, only three still exhibited sensory problems after the procedure. No patients reported postoperative residual motor problems. Twelve patients developed radicular pain after the operation which subsided in 15–21 days (19).

Salame and Lidar reported a retrospective analysis on thirty-one patients who underwent minimally invasive discectomies via a 15mm diameter port. They observed a reduction in muscle weakness in all patients, and sensory recovery in twenty-two out of thirty-one patients and improvement in five patients. The observed two cases of dural tear complications. They also emphasize the benefits of reduced muscle and ligament damage, reduced surgery times, reduced recovery time, and minimal bone removal (1).

O'Toole et al. investigated minimally invasive far lateral microendoscopic discectomies at the lumbosacral junction on two cadavers and one patient. They found that by resecting the superior ala, they were able to more readily access the nerve root. The patient reported immediate pain relief and was discharged within three hours (6).

Greiner-Perth et al. have conducted a study on a microscopic technique via a port with an internal diameter of 9 mm on fifteen patients. Using a 1.5-cm incision they were able to spread the paraspinal muscles and consequently insert the working channel. This technique does not require bone resection, or interference with the facet joints, however partial resection of the intertransverse ligament was necessary. They reported an average surgery time of 43 minutes, rapid recovery and minimal surgical trauma. They observed an improvement in Oswestry disability index and improvement in leg pain using the visual analogue scale. The only complication was one recurrence which was retreated using the same technique (20).

Cervellini et al. also conducted a study of the micro-endoscopic far lateral discectomy technique on seventeen patients, with a good outcome for all patients. No post-operative pain was reported, any dysesthesia was resolved within 3 weeks, and all patients were immediately postoperatively mobile. Operation time ranged from 45–120 min and all patients were discharged in less than 48 h (14).

Foley et al. studied eleven patients with far lateral disc herniation that failed to respond to non-operative care. They performed microendoscopic discectomies at L3/4 and L4/5 discs using a 15 mm paramedian incision with an operation time from 90–120 min, and all patients were discharged <6 hours after surgery. This technique resulted in no residual motor deficits or complications, and short hospitalization periods. Nine patients had preoperative sensory problems, and five of these improved postoperatively. One patient experienced non-radicular pain. They emphasize that this technique advantageously allows the pathology to be examined and resected directly via the paramedian incision (21).

Fuentes et al. reported a retrospective study on twenty-six patients who were treated for far lateral disc herniation by making a 12–15 mm paramedian incision, and then using a tubular muscular retraction system and a 1.4-cm working channel guided by a microscope. The average surgery took 55 min and patients were discharged within 5 days. No complications were reported (22).

Wu et al. conducted a retrospective study on 873 patients with lumbar disc herniation who received microendoscopic discectomies with a view to assessing long-term outcomes; this included a subset of fifty-eight patients who had far lateral herniations. Results were compared to a control group of 358 patients who received standard open discectomies. Broadly, they observed improvement in visual analogue scale scores for both the microendoscopic discectomy and open discectomy groups, although no statistically significant difference between the two groups. Further conclusions are limited as the far lateral protrusions were not reported separately (24).

We outline a microdiscectomy technique using a paramedian incision for treatment of far lateral disc herniation where conservative care has failed. This technique rectifies the disturbed anatomy without entering the spinal canal, maintains the integrity of the facet joint, provides a less painful muscle dissection than entering through the midline, provides better long-term results than a hemilaminectomy or facetectomy, and reduces operating time, recovery time and overall procedural costs. The limitations of this technique include difficulty in making a lateral incision due to the iliac crest at L5-S1 and orientation of the anatomy that is often unfamiliar to surgeons accustomed to treating paracentral disc protrusions.