A 38-year-old male, was repeatedly breath hold diving for recreational spear fishing (4–8 meters depth) for an hour and a half, when he noticed weakness in his limbs while ascending. After returning home, his symptoms did not subside and he subsequently presented to the emergency department. Apart from ataxia, there were no neurological signs noted. He underwent one treatment cycle in a hyperbaric oxygen chamber. Within a few hours, he developed paraplegia with T4 spinal level. Magnetic resonance imaging (MRI) revealed acute intramedullary hemorrhage at T1-T2 level with surrounding edema and a small enhancing lesion (Figure 1). He was managed conservatively with steroids and the paraplegia improved with Brown-Séquard variant signs: right-sided lower limb power 2/5 with left-sided 1/5 power, loss of temperature and pinprick on right side and joint position sense was absent on both sides. 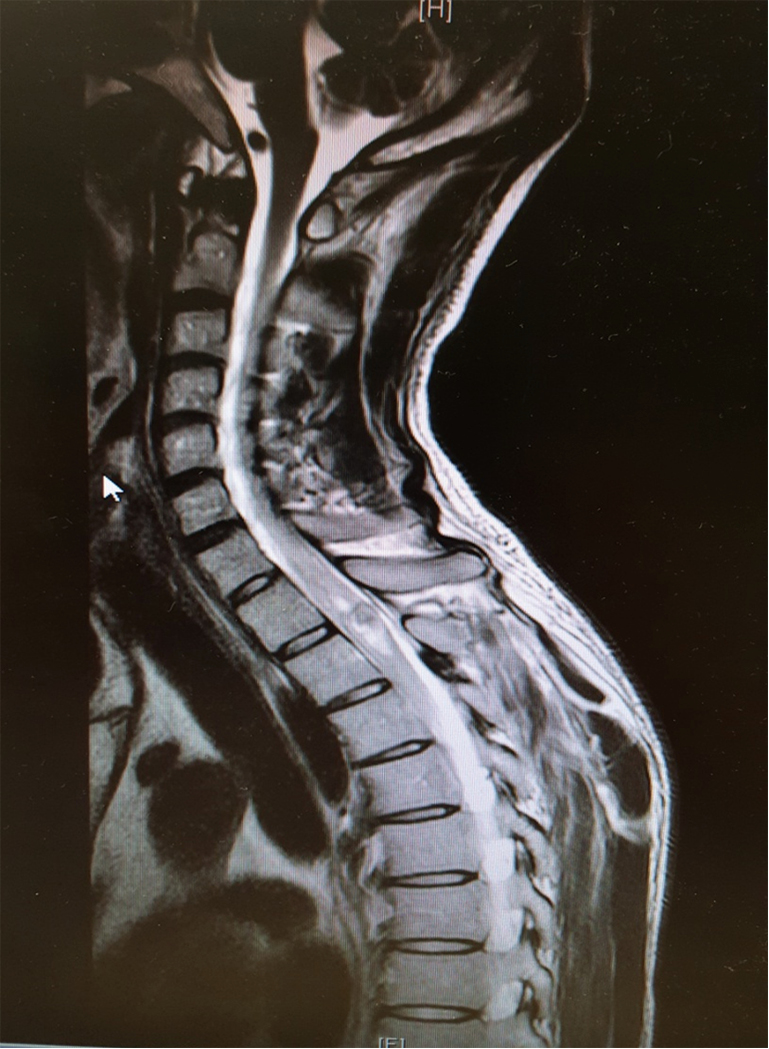 A repeat scan at three weeks delineated the lesion (Figure 2) and surgery was performed to remove the lesion. A standard T1-T2 laminectomy was performed (Figure 3) with dural opening and microscope. There were abnormal vessels entering the lesion. The lesion was gently removed from the surrounding tissue with sharp dissection. Once the lesion was removed the hematoma was seen and dissected from normal tissue and removed. Hemostasis was secured and dural closure performed with 5-0 Polyglactin suture and strengthened with fibrin glue. 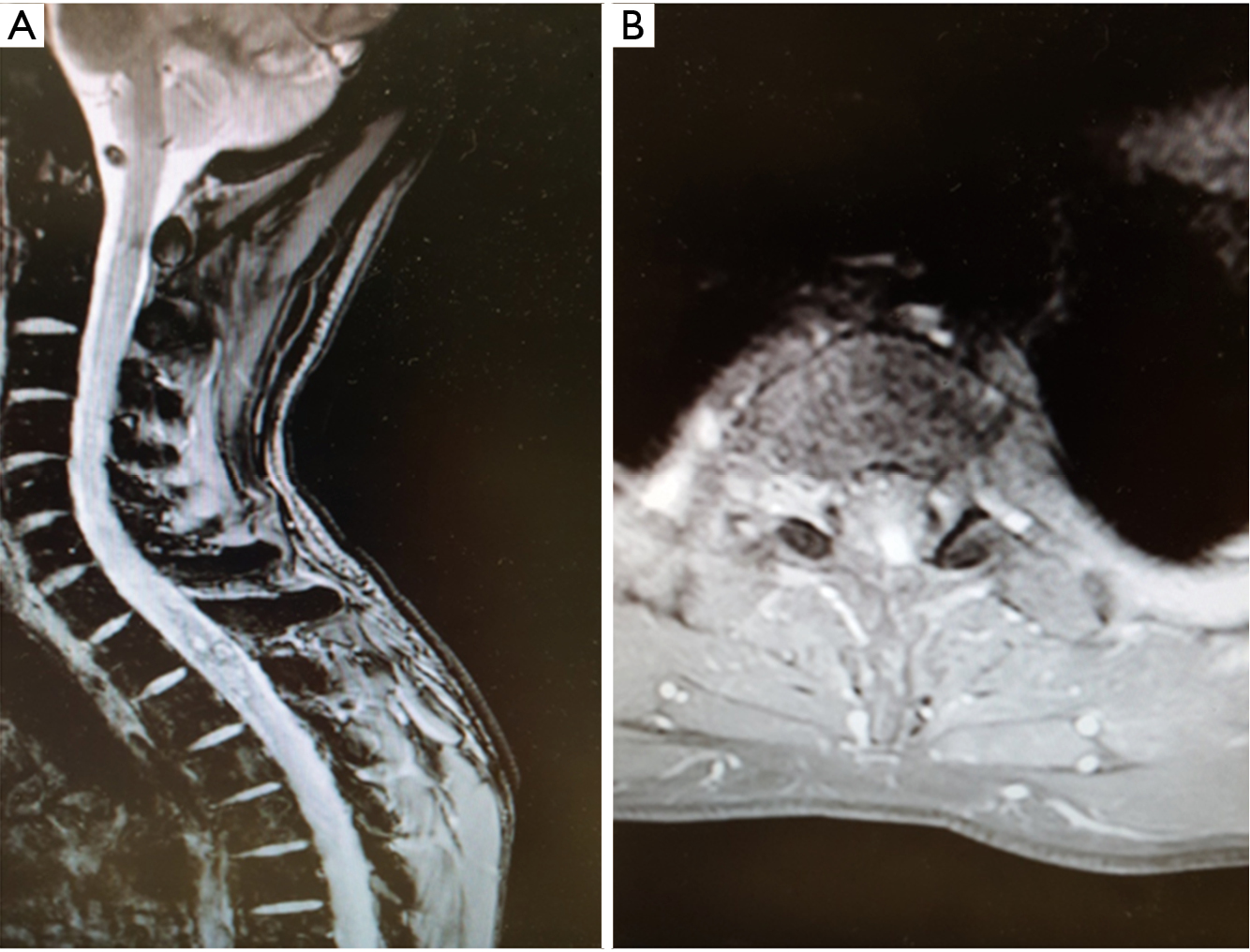 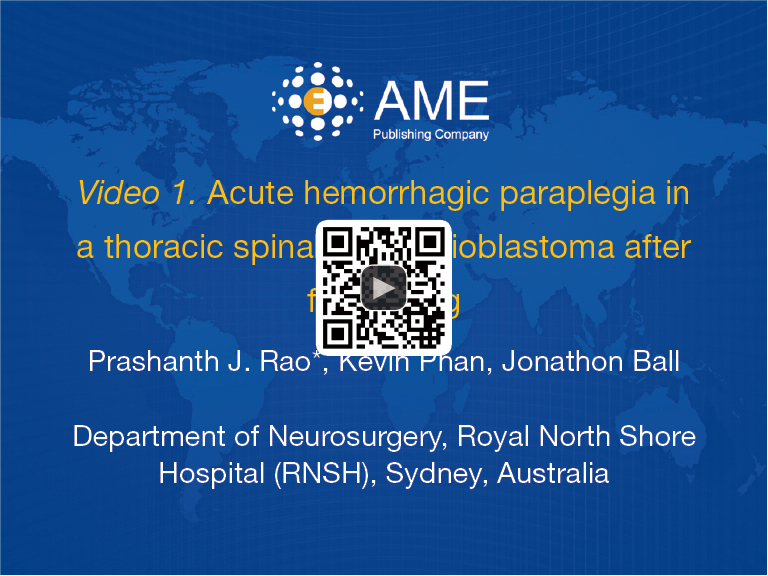 Postoperatively, the patient started to improve with increased power to 3/5 in knee and ankle movements on the right. Histopathology confirmed hemangioblastoma. Neural axis imaging did not locate any further lesions. CT scan of the abdomen identified very small renal cysts.

Hemangioblastomas are rare spinal cord tumors, with a reported prevalence of 3%. Occurrence in the cervical region is the most common (60%) followed by the thoracic region (40%). In the majority of cases, the neurological deficit is caused by edema, syrinx formation or increase in tumor size. Rarely acute hemorrhage is the cause for the acute presentation. There are three cases of thoracic hemorrhage (2,3) and one in cervical region (1).

This case is unique as the patient was asymptomatic and the acute deterioration occurred during free breathhold diving. We are unsure if there is a causal relationship to the diving as the depth was not significant and he was not breathing compressed gases. There are several case reports of free diving-related decompressive spinal sickness (5,6). The mechanism proposed include nitrogen gas accumulation over a period of time causing venous stasis and venous infarction. Arterial infarction is presumed to be a less accepted etiology. In this case this may have caused venous hypertension resulting in the hemorrhage.

A case of acute paraplegia from hemorrhage into a thoracic spinal hemangioblastoma is presented, which was successfully managed with T1-T2 laminectomy, evacuation of hematoma and resection of tumor. Whether free diving could be the cause for the hemorrhage is discussed.