Off-label use of BMP-2 has increased since its approval by the FDA for use in anterior lumbar interbody fusion in 2002 (6). In younger children, there are significant theoretical advantages to BMP-2 use compared with the accepted “gold standard” of autologous bone implantation, especially in the pediatric spine where there is little local bone available for harvest. BMP-2 usage affords advantages including decreased operating time, blood loss, and donor site morbidity (pain, infection and potential structural weakness in the iliac crest), and improved ease of use and efficacy. We previously reported successful occipitocervical fusion in two pediatric patients under 10 years of age using off-label BMP-2 (7). Both patients were followed for over 5 years post-surgery and did not demonstrate significant adverse events related to BMP-2 usage (7). This manuscript highlights the paucity of literature involving BMP usage in pediatric spine fusion surgery. There are no published reports describing BMP usage in the anterior spine and very few describing off-label usage in the posterior pediatric spine.

Off-label usage of BMP-2 remains controversial in pediatric spine fusion surgery. The FDA has not approved the use of BMP in children. The manufacturers of BMP-2 consider its use in children less than 18 years of age or in those that lack epiphyseal closure to be a contraindication. There are also some serious drawbacks related to the use of BMP-2, including a high cost and increased rates of reported complications (8-10). For example, postoperative complications including seroma, infection, heterotopic bone growth, new radiculopathy and bone resorption around fixation devices have been reported (8,10,11). Additionally, it is unknown whether the long-term effects in children may include an increased future risk of cancer. While we did not report any adverse events related to BMP-2 usage in two patients (7), the risk of complications related to pediatric BMP-2 use remains undefined.

There is currently no literature involving the use of BMP-7 in the pediatric spine. There is scant literature reporting increasing BMP-2 usage and efficacy in pediatric thoracic and lumbar spinal surgery (summarized in Table 1). Jain et al. demonstrated that surgeons in the USA are more frequently using BMP in pediatric thoracolumbar spine fusions (6). The usage of BMP-2 in pediatric spine fusion surgery increased from 2.7% in 2003 to 9.3% in 2009. The highest rate of pediatric BMP-2 use was in patients with lumbar spondylolisthesis. The authors also reported increasing BMP-2 use in patients with scoliosis and thoracolumbar fractures.

Rocque et al. examined BMP-2-associated complications in pediatric patients who underwent thoracolumbar spinal fusion in the early postoperative period (3). A total of 4,650 patients underwent spinal fusion and BMP was used in 1,752 patients (37.61%). There was no difference in the rate of BMP-2 use when comparing male and female patients, or those aged between 10–19 years versus those less than 10 years of age. The authors found no significant difference in complication rates when comparing the group of patients who received BMP-2 to patients who had autogenous bone graft. Furthermore, the reoperation rate was nearly identical between the 2 groups. The authors concluded that the rate of BMP use in pediatric spinal fusion surgeries performed in the United States is higher than expected, however the rate of complications was not initially higher.

There are few reports of BMP-2 usage in posterior pediatric spine fusion surgery. Mladenov et al. described three pediatric patients who received BMP-2 during posterior cervical spine surgery as a salvage fusion procedure (5). Solid fusion was achieved in all 3 patients despite underlying bone dysplasia conditions in each of the patients, and no complications were observed. Lu et al. reported BMP-2 use during a successful C1-2 fusion in a 4-year-old patient with Down syndrome, and Oluigbo et al. described BMP-2 use during posterior cervical spine surgery in a 2-year-old with C1-2 instability (12,13).

Mazur et al. found that complications required revision surgery in 16% of pediatric patients who had occipital cervical fusion within an average follow-up of 43 months (14). Ultimately, bony union was achieved for 44 of 57 patients. BMP-2 was used in 7 patients (5.5%) with no reported complications. However, the authors clearly stated that they only used BMP-2 for salvage procedures during pediatric occipital cervical fusion because, in their opinion, the documented risks outweigh the benefits.

Sayama et al. reviewed 50 consecutive pediatric cases involving the use of rhBMP-2 in fusion surgery in all regions of the spine including cervical, thoracic and the lumbosacral region from the years 2007–2011 (15). The average age to the patients was 11.4 years and the average follow-up time was 4 years. The authors evaluated for an association between BMP use and cancer risk in all patients and determined that there were no new cases of malignancy or metastasis of existing malignancy in any patient in this small series.

We are unaware of any published reports involving BMP-2 use in the pediatric anterior spine, and do not recommend BMP-2 use in anterior approaches to the cervical spine. The existing literature also remains unclear on the appropriate BMP-2 dosage when used in the posterior pediatric spine. We have previously demonstrated that using a single packet of the large “low-dose” (12 mg) commercially available BMP-2 formulation and combining it with an appropriate graft extender led to successful occipitocervical fusion in two young children (Figure 1) (7). 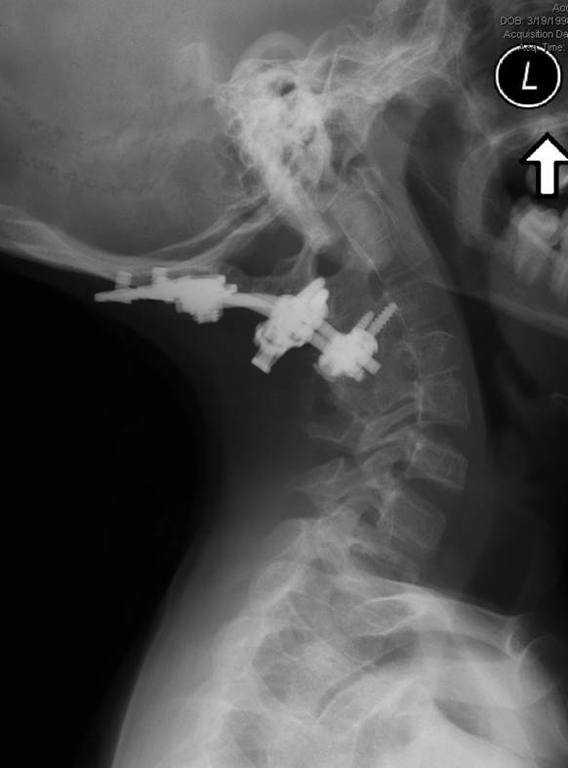 We also must emphasize that the long-term toxicities of BMP-2 use in children remain unknown. In a systematic review of published studies on complications associated with BMP-2 use, Epstein et al. highlighted risks of adverse events related to both FDA-approved and off-label BMP-2 use (8). In the face of such reports, increasing the use of BMP-2 in pediatric spine surgery ought to still be considered experimental. With few published pediatric spine outcome studies involving BMP-2, success and complication rates remain unknown. The increasing use of BMP-2 in pediatric spine surgery should still be approached with considerable caution-especially in the posterior cervical spine where relatively fewer studies exist. Families and patients should be thoroughly informed of the risks and potential benefits of such use, and this discussion should be carefully documented in the medical record.

The limited findings in this review suggest that the surgical benefits of conventionally available low-dose BMP-2 may outweigh the risk. However, there remains a paucity of literature on this topic and further study is encouraged.

The potential for BMP-2 to achieve successful arthrodesis of the spine in pediatric patients has been reported. Usage should be judicious, as complications and long term outcomes of pediatric BMP usage remain undefined in the existing literature.