Kyphotic deformity after laminectomy surgery for a gunshot wound to the spine: a case report

Spinal kyphotic deformity after spinal laminectomy and laminoplasty is uncommon in adults but often occurs in the pediatric population; it has been reported that spinal deformity occurs in 26% of newborn infants and children after laminectomy (1,2). Lonstein proposed that kyphotic deformity can be attributed to the decrease in cartilage growth and anterior wedging associated with laminectomies in which the cartilage endplates of the vertebral bodies experience increased pressure in the anterior direction (3). Moreover, posterior spinal muscle insufficiency following laminectomy can result in the progression of the kyphotic deformity (2).

Herein we present a case report of a child who showed post-laminectomy kyphotic deformity after undergoing laminectomy to treat penetrating spinal trauma.

An 8-year-old male admitted to Rasoul-e-Akram Hospital presented with a penetrating spinal injury due to a gunshot wound to the thoracolumbar region. The patient had no past medical history. The patient underwent L1 bilateral laminectomy, facetectomy, thecal sac decompression and removal of foreign bodies. After surgery, he experienced severe lower limb paraparesis and sphincter control deficit. In a follow-up visit he demonstrated only minimal improvement in neurologic condition and displayed sagittal balance kyphotic deformity. The plain radiography and computed tomography (CT) scan revealed kyphotic deformity associated with L1 laminectomy (Figure 1). Because of progression of the kyphotic deformity and persistence of the neurologic deficits, he was referred to the care of the authors. 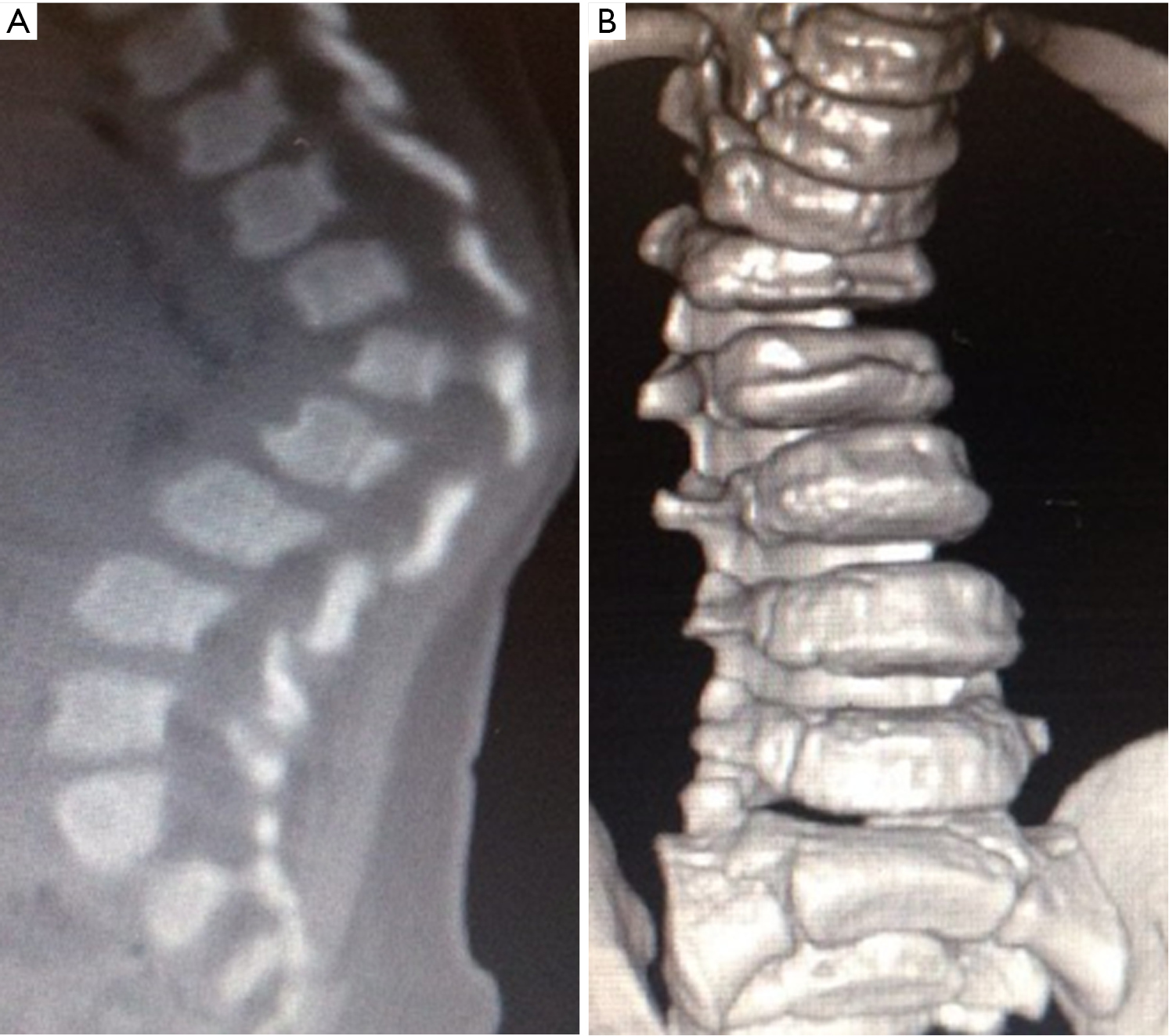 The patient then underwent a surgical procedure following the diagnosis of post-laminectomy kyphotic deformity. The patient was given general anesthesia and placed in the prone position, and then skin preparation and draping were done. After a skin incision, sufficient dissection and exposure with a scalpel, pedicular screws were inserted into the vertebral body of T10, T11, T12, L2 and L3. Using contouring rods and by performing a compression maneuver, the deformity was corrected and the reconstructed spine was reinforced by allograft posterior fusion. The postoperative CT scan showed satisfactory correction of the deformity and good sagittal balance (Figure 2). At four months follow-up the patient demonstrated a significant improvement in neurologic condition with lower limb force and sphincter function improving significantly, although the patient displayed left foot drop. 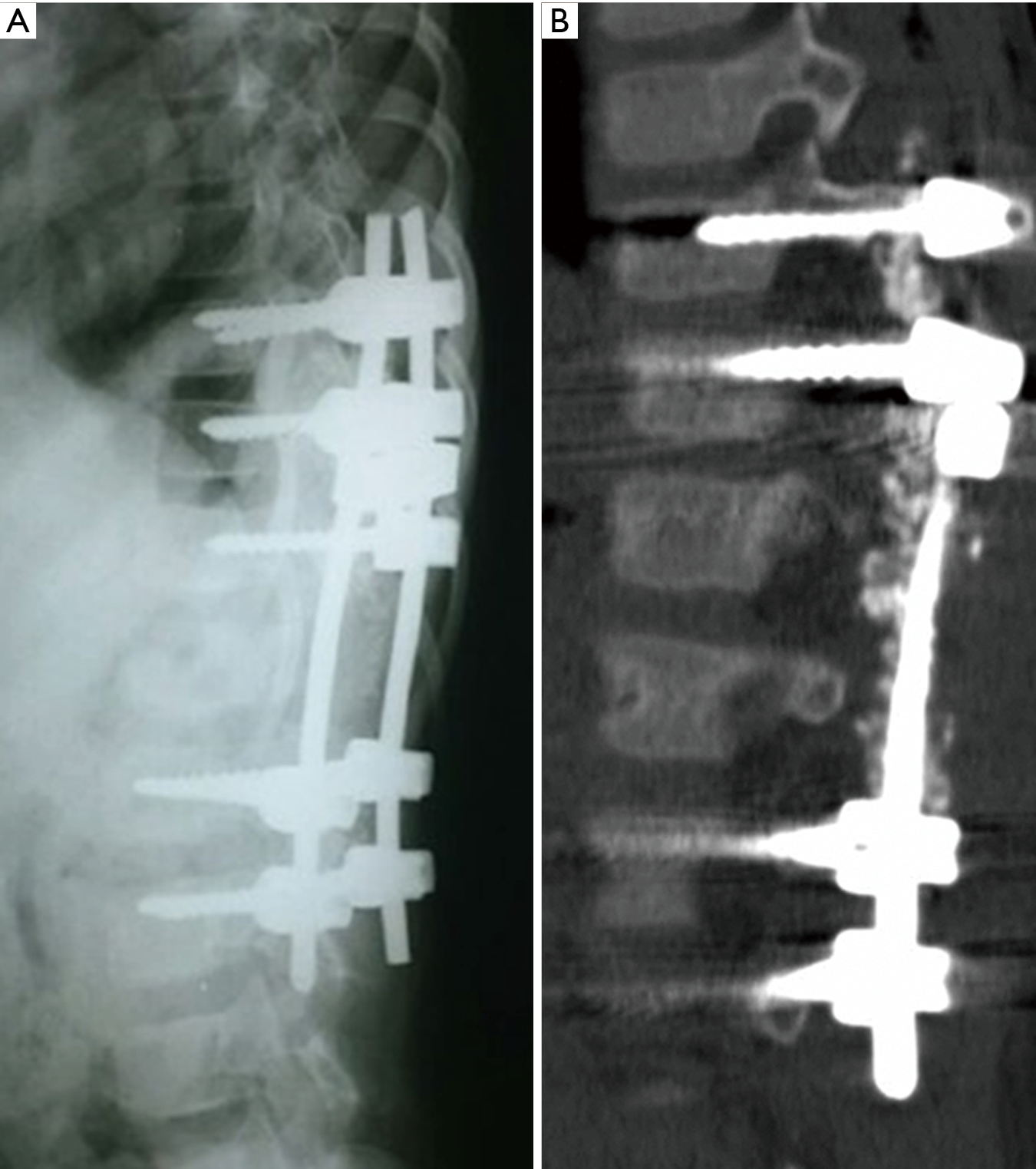 Following laminectomy, the loss of posterior elements that resist traction forces can result in kyphotic deformity. This may or may not be related to the failure of support of the anterior portion of the spinal column. In its severe form, post-laminectomy deformity may cause neurologic symptoms due to neural compression (1).

Bartolussi hypothesized that as the deformity progresses the weight tolerating pivot of the body moves anteriorly and thus can only be corrected with spinal column sagittal balance reconstruction (4). Other theories suggest that arrest in vertebral growth due to radiation and posterior muscle insufficiency are the main causes of deformity following laminectomy (2).

Immobilization after surgery can cause a delay in the development of kyphotic deformity, but does not appear to prevent it (1).

Surgical intervention is indicated in the severity and progression of the deformity and related neurologic deficits (5).

Lutz reported that the time between surgery and post-surgery kyphosis was four years and three months. The mean kyphotic angle improved from 87 degrees to 38 degrees. The mean age at first surgery was three years and one month and for correction surgery was eleven years and seven months (1).

Kelley reported a four year old male who underwent T9 to L3 laminectomy for resection of a tumor. When the patient was nine years old, he presented with kyphotic deformity with kyphotic angle of 110 degrees. After posterior approach repair surgery, post-operative imaging demonstrated good reconstruction with the kyphotic angle decreased to 65 degrees (8).

Norman and colleagues surveyed twelve patients with severe post-laminectomy and post-radiation kyphosis. The mean age was fifteen years and the mean follow-up time was sixty-five months. Following repair surgery, the mean kyphotic angle improved from 84 degrees to 39 degrees. The posterior approach was performed in three patients and the remaining nine patients underwent a combined anterior and posterior approach for their repair surgery. The time between initial laminectomy surgery and repair surgery was at least nine months (5).

In another study, Papagelopoulos and co-workers followed 36 patients who underwent multilevel lumbar or thoracolumbar total laminectomy. Twelve of the patients were younger than seventeen years of age and their mean age was eleven years. At a mean follow-up of fourteen years, spinal deformity was identified in 33% of pediatric patients and 8% of adult patients. These results indicate that age, clinical condition and follow up period can influence the post-laminectomy kyphosis (9).

The key features of the aforementioned studies are outlined in Table 1. 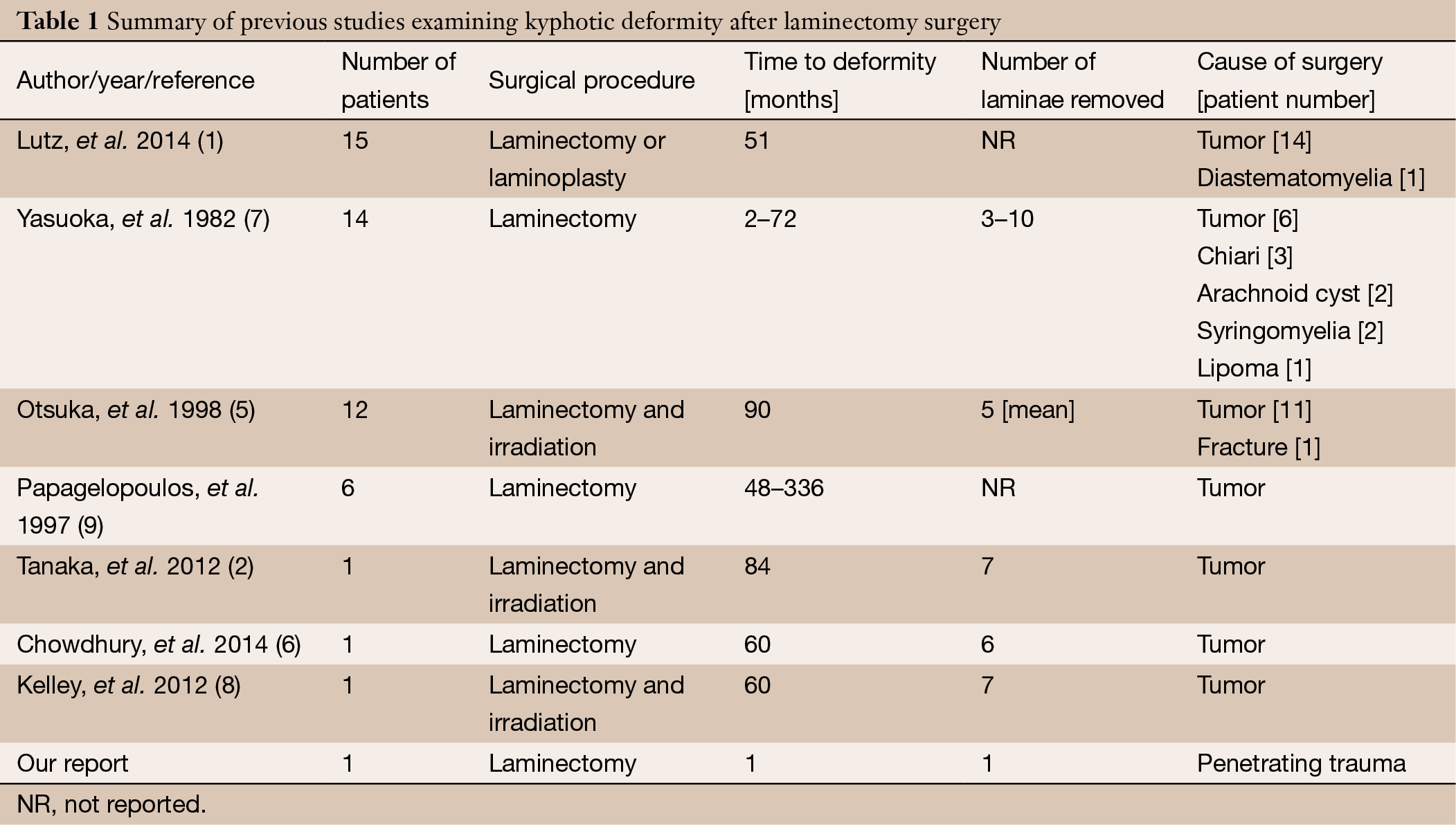 The aforementioned studies indicate that post-laminectomy kyphosis: usually occurs several years after surgery, is more common following laminectomy involving the cervical and thoracic spine and occurs more frequently following laminectomy within the cephalad level or multilevel laminectomy. In contrast, we reported a case where the deformity occurred one month after a one level laminectomy in the thoracolumbar region (L1). Furthermore, we performed corrective surgery with the patient using the posterior approach only and reconstructed the posterior column to attain a good sagittal balance and then reinforced it by posterior fusion.

Post-laminectomy kyphosis can occur shortly after surgery and is a primary concern and complication in pediatric patients after a laminectomy. It is important to consider the following factors during surgical planning in order to prevent the development of post-laminectomy kyphosis: minimize muscle dissection and bone removal during laminectomy, avoid facet disruption, use laminoplasty rather than laminectomy, include post-operation immobilization and bracing, perform regular follow-ups for early detection and treatment of any deformity.

The authors would like to thank Rasoul-e-Akram Research Development Center for editing of this paper.