Cervical disc disease affects up to 84 people per 100,000 of the population, with the C7 segment being the most commonly affected (1). Disc pathology may manifest clinically as localized and radicular pain, myelopathy and spinal joint instability. If severe, such as in degenerative disc disease, infections and trauma, surgical methods are indicated. As first outlined by Robinson and Smith (1955), the gold standard of surgical intervention has been anterior cervical disc fusion (ACDF), though the procedure is speculated to reduce local mobility while simultaneously driving significant adjacent disease (2,3). Study by Goffin et al. (1995) (n=25; follow-up 5-9 years) estimated prevalence of adjacent segment disease to be approximately 60%, although this number has drastically reduced with current studies reporting figures as low as 16% (4-6). However, as described by Harrod et al. (2011), the reported figures differed significantly amongst individual studies based on radiological or clinical assessment, and Harrod et al. openly criticized their own conclusions due to a lack of quality evidence (7). Radiological classifications are generally inclusive of features such as disc space narrowing, osteophyte formation, and end-plate sclerosis (8).

Over the last few decades, the emergence of artificial discs has offered a secondary option of management, with multiple products approved by the FDA. The most common artificial discs are the Bryan Disc, the Prestige Disc and Pro-Disc-C. At present, the Mobi-C is the only approved artificial disc for use in both single- and double-level operations (9). Referred throughout the literature as a total disc replacement (TDR) or disc arthroplasty, some studies have demonstrated motion preservation and reduced adjacent segment disease in comparison to the fusion alternative (8,10). However, the incidence of post-operative complications and reoperation rates ranges across accessible studies with no formal conclusion on overall outcomes.

Several reviews have been published comparing the two procedures across multiple clinical, radiological and patient-outcome domains, however there remains a lack of consensus over which option is superior (11-14). Conclusions amongst reviews are not consistent with Gao et al. (2013) demonstrating superiority in surgical parameters associated with ACDF and better clinical outcomes for disc arthroplasty (13). The aim of our study is to perform a meta-analysis on the clinical and biomechanical factors comparing ACDF with anterior cervical disc arthroplasty (ACDA) for the treatment of single-level cervical disc disease.

The Preferred Reporting Items for Systematic Reviews and Meta-Analyses (PRISMA) guidelines were adhered to for the present review (15,16). Electronic searches were conducted using OVID Medline, PubMed, Scopus, Cochrane central register of controlled trials (CCTR) and the Cochrane database of systematic reviews (CDSR) from their dates of inception until April 2015. Key terms were combined using common Boolean principles and included the group terms of “ACDF” or “anterior cervical disc fusion” and “ACDA” or “artificial disc arthroplasty” or “cervical disc arthroplasty” or “total disc replacement”. Two authors (M.M. and J.H.) performed the search independently with any discrepancies resolved by discussion. The reference lists of all retrieved articles were reviewed for identification of relevant studies omitted from search results. All studies were assessed using our selection criteria. The cut-off point for our definition of short term was arbitrarily set at a mean follow-up of less than or equal to 36 months.

Eligible studies for the present meta-analysis were comparative in nature, comprising patient groups who were treated with ACDF or ACDA. Studies with fewer than ten patients in each cohort were excluded. All publications were limited to those involving human subjects and in the English language. Abstracts, case reports, conference presentations, editorials, reviews and expert opinions were excluded.

Relevant data was extracted from manuscripts, tables and figures. Two investigators (M.M, J.H.) independently reviewed each article, with discrepancies resolved by consensus and discussion. The quality of studies was assessed using case series quality assessment criteria recommended by the National Health Service Centre for Reviews and Dissemination (University of York, Heslington, UK) (17). The final results were reviewed by the senior investigators.

Relative risk (RR) and weighted mean difference (WMD) were used as summary statistics. In the present study, both fixed-effect and random-effects models were tested. In the fixed-effect model, it was assumed that treatment effect in each study was the same, whereas in a random-effects model, it was assumed that there were variations between studies. χ2 tests were used to study heterogeneity between trials. I2 statistic was used to estimate the percentage of total variation across studies, owing to heterogeneity rather than chance, with values greater than 50% considered as substantial heterogeneity. I2 can be calculated as: I2 = 100% × (Q – df)/Q, with Q defined as Cochrane’s heterogeneity statistics and df defined as degree of freedom. If there was substantial heterogeneity, the possible clinical and methodological reasons for this were explored qualitatively. In the present meta-analysis, the results using the random-effects model were presented to take into account the possible clinical diversity and methodological variation between studies. Specific analyses considering confounding factors were not possible because raw data was not available. All P values were 2-sided.

Following search criteria 255 studies were located. After removal of duplicate studies and irrelevant results, 240 articles remained for detailed evaluation (Figure 1). After thorough screening 28 studies remained for assessment involving a total cohort of 4,070 patients, including 2,156 who underwent ACDA and 1,914 who underwent an ACDF procedure. Only prospective randomized controlled trials (RCTs) were included. The study characteristics and quality assessment are summarized in Table 1 and Table 2 (8-10,18-42). 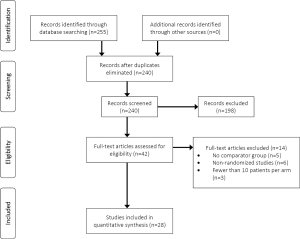 Table 3 illustrates the baseline data of analyzed outcomes. In our study, there was no significant difference in demographics between ACDA and ACDF. The average age in the ACDA cohort was 43.8 years compared to 44.6 years in the ACDF group. The proportion of males in the ACDA group was 36.7% vs. 37.6% in the ACDF group. 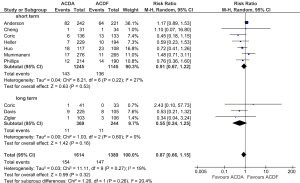 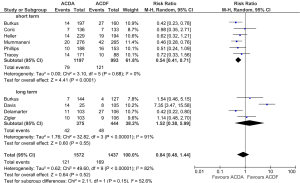 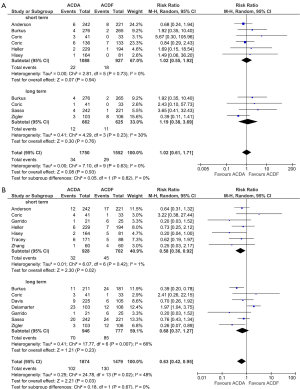 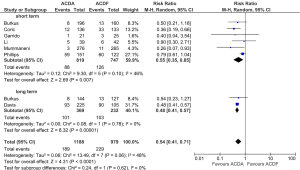 Only eight human studies reported on the biomechanical parameters of range of motion and adjacent segment disease. In general motion was stratified into the flexion-extension range at the level of surgery as well as one spinal unit superiorly and inferiorly. At baseline there were no significant differences between the ACDA and ACDF cohorts across all three subgroups of analysis (Table 1). Pooled meta-analytical data (n=8) in the short term favored the ACDA procedure at the level of injury (RR, 4.79, P<0.00001) with no significant differences in the range of motion across both adjacent levels. In general the trend across the raw data illustrated a slight relative increase in the adjacent ROM in the fusion procedure.

ACDF has been widely accepted in the setting of cervical disc pathology for decades. The major criticism of the procedure has been severe reduction in joint mobility at the operated level and an increased risk of adjacent segment disease. This comes as no surprise due to the surgical principles underlying the local fusion procedure.

Previous work by Gao et al. has demonstrated superior local ROM associated with the disc arthroplasty procedure (WMD 5.70 degrees; n=603; P<0.00001) (13). A separate meta-analysis by Yang et al. (2012) demonstrated a difference in incidence (RR, 0.57; 95% CI, 0.19-1.72; P=0.32) between the two, but failed to achieve statistical significance (43). Our findings demonstrate an increased range of motion associated with the ACDA procedure across both short- and long- term outcomes at the level of operation.

In terms of the ROM within adjacent segment units, our data, although not statistically significant, does show a trend towards a relative increase in the fusion cohort. Some studies have demonstrated increases in inter-segmental motion as a mechanism of motion compensation, which may account for these results (3,5,24,44). Biomechanical data has led to the hypothesis that this increase may pre-dispose the patient to adjacent segment disease, the major contributor to reoperation rates (45,46).

Although we have found a difference in the rates of adjacent segment disease, our data has not indicated a correspondence between this clinical finding and reoperation. We speculate that this may be due to differences in definitions amongst studies for the clinical outcome, with the descriptive term across different papers representing a combination including: device removal/adjustment, adjacent segment operation and/or re-operation at the same level. As a consequence, other similar meta-analyses have not reported on true reoperation (11,13,47). When categorizing data to separate true reoperation at the same level, we found no differences between the ACDA and ACDF groups. However, taking such a rigorous approach to the definition limits the external validity of these conclusions due to the small number of studies included (long term: n=4). According to a multi-center (n=13), single-device trial by Murrey et al. (2007), the rate of true reoperation at the same level is approximately 1.8% (n=107, follow-up: 24 months).

Two previous reviews have demonstrated a longer operational time associated with the disc arthroplasty procedure, hypothesizing surgical experience to be the major underlying factor. Importantly neither study reported a difference with a magnitude that we believe to be clinically relevant (11,13). Our study found negligible differences between the two procedures in terms of both operational time (84.6 vs. 95.9 mins) and blood loss (63.0 vs. 69.1 mL). Consistent with this trend, we believe that as the volume of available literature increases alongside surgical experience over time, both procedures should converge due to the overall similarities in surgical approach and technique. Our pooled operational outcomes are directly comparable to those achieved with multiple cervical arthroplasty devices. We were unable to sub-stratify outcomes based on the type of artificial disc used due to the small number of trials for each. Only one paper by Zhang et al. (2015) has directly compared different devices and found clinically negligible differences between the Bryan disc and the Pro-Disc C products (48). Currently the Prodisc-C, Prestige and Bryan devices are the only products approved for use clinically by the FDA (12,49).

Our findings demonstrate ACDA to be a safe procedure with favorable outcomes in the setting of cervical disc disease. In our meta-analysis, 34 studies remained suitable for statistical analysis with a mean follow-up ranging between 24-84 months. Our review is unique in that it employs a strict and updated methodology specifically focusing on the clinical parameters surrounding the two procedures in comparable RCT trials. Importantly we concede that bias could have arisen from insufficient reporting in many trials, namely due to the lack of standard deviations, which is something to be addressed in future studies.

Reporting on neurological outcomes was not consistent throughout comparison studies. In particular the reporting of the VAS was not clearly defined amongst trials, with two different scales utilized amongst different trials, thus limiting the external validity of our conclusions. Our results contradict those reported by Ren et al. (2014) and Fallah et al. (2012). However, overall, the pooled cohort volume for these conclusions limits the external validity of claims (47,50). Some studies stratified data presentation into groups with proportional improvement, preventing their entry into our statistical analysis (30,51). Despite this our results did demonstrate statistically favorable clinical outcomes associated with the ACDA group on the bases of NDI and VAS arm score improvements, although longer follow-up data is still required. Both procedures have been validated to improve clinical outcomes (VAS, SF12, SF36, NDI), however adequate data comparing the two is lacking.

Although no large-scale trials currently compare the outcomes of different disc replacement products, we concede that differences in outcomes may exist. The most commonly used device in our study was the Bryan disc, implemented in eight of the trials included in the final meta-analysis. In addition the lack of standardization, due to differences in definitions and general data reporting, resulted in the exclusion of over half of the trials from the data extraction phase of the methodology. Aside from aforementioned definitions this also included reporting of changes as opposed to actual values and not reporting variances.

The present meta-analysis demonstrates that cervical disc arthroplasty is superior to the ACDF procedure in the setting of cervical disc disease on the basis of improved reoperation rates and reductions in neurological deficit amongst other previously demonstrated benefits. There are no differences between the two procedures amongst patient-reported clinical outcomes. However, future reporting of clinical outcomes, particularly VAS scoring, needs to be standardized. There may be differences in outcomes amongst different ACDA devices, however the current volume of literature does not enable appropriate comparisons to be made.