Surgery for spinal tuberculosis: a multi-center experience of 582 cases

Tuberculosis (TB) is a common form of osseous TB, accounting for 50%-60% of cases. The first modern description of spinal deformity and paraplegia resulting from spinal TB was described by Percival Pott in 1779 (1). Although uncommon, spinal TB still occurs even in both developed and developing countries (2,3). The diagnosis of spinal TB is difficult and it commonly presents at an advanced stage. Delays in establishing diagnosis and management contribute to higher rates of complications such as spinal cord compression and spinal deformity. Patients mostly present with lower limb weakness, Gibbus deformity, pain, palpable masses, and kyphotic deformity in long-standing cases.

The treatment for spinal TB remains a difficult and challenging decision making process, given the lack of evidence and guidelines on the optimal treatment and management strategies (4). Conservative treatment options for spinal TB include methods such as immobilization using body casts or plaster beds, as well as a healthy diet. Following the introduction of anti-TB drugs, has been hypothesised that such medications may be indicated in spinal TB patients. However, anti-TB drug treatments may not be suitable in cases where patients are at risk of instability, progression of neurological deficit, as well as patients who are refractory to medical treatment. Furthermore, the lengthy course of anti-TB therapy, typically 9-18 months and longer (5), is both a social and economic burden, as well as a personal burden to the quality of life of the patient. Alternatively, surgical treatment options are available including anterior spinal fusion, anterior-posterior spinal fusion, posterior spinal fusion alone, and posterior fusion followed by anterior spinal fusion (6-8). However, the indication for each surgical procedure remains unclear, given the lack of literature on the safety, neurological outcomes and complication rates of surgical intervention for spinal TB.

The objective of this study is to evaluate the efficacy and clinical outcomes of different treatment approaches of spinal TB, including decompression surgery, autogenous bone grafting and anti-TB chemotherapy. We present our experience with surgical treatment of a prospective consecutive series of spinal TB from a multi-center study, and describe clinical and neurological outcomes.

Multi-center study ethics approval was granted by the local institutional ethics board. Written informed consent was obtained from all patients or guardians.

The surgical approach included thoracotomy with anterolateral decompression and autogenous strut bone grafting with simultaneous fixation by screws and rods was used in 113 cases. Patients were operated in the lateral position, and surgery was performed under general endotracheal anesthesia. After routine exposure, the necrotic material within the disc and vertebral bodies was removed. If a paravertebral abscess was large, drainage was performed to localize the margin of the lesion. After debridement, distraction was performed to correct kyphosis. Simultaneously, autogenous strut bone grafting was performed to reconstruct the anterior column defect. This was performed with simultaneous fixation. The other surgical technique used was posterior decompression, posterior interbody and posterolateral fusion by bone graft with stabilization by transpedicular screws and rods. The latter technique provided 360 degree spinal cord access. Appropriate anti-TB drugs isoniazid, rifampicin, ethambutol, pyrazinamide) were given to all patients for 18-24 months. The follow-up period ranged from 3 months to 10 years.

SPSS for Windows (version 16.0; SPSS, Inc., Chicago, IL, USA) was used for data analysis. A paired t-test was used to compare the pre-treatment and post-treatment clinical data including ASIA Grade. The results are reported descriptively or as mean ± standard deviation (SD). A P value of less than 0.05 was considered statistically significant.

A total of 582 patient cases of spinal TB were prospectively collected from 2003-2014. This included 335 male patients (57.6%) and 247 female patients (42.4%). The average age was 32.5 years (range 9-82 years). Thoracotomy with anterolateral decompression and autogenous strut bone grafting with simultaneous fixation by screws and rods was performed in 113 cases (19.4%). Posterior decompression, posterior interbody and posterolateral fusion by bone graft with stabilization by transpedicular screws and rods were done in the remaining 469 cases (80.6%).

All patients survived surgery. There were 7 cases of superficial infections (1.2%) whilst there were 4 cases (0.7%) of deep infections. Revision surgery was performed in 6 patients (1.0%), which involved exploration by a posterior approach. This included removal of rods, screws and cage, followed by decompression and stabilization by pedicle screws and rods, and finally interbody fusion by cage and bone graft. Implant failure occurred in 4 cases (0.7%) whilst malposition of screws occurred in 12 cases (2.1%). Perioperative bleeding complications were reported for 4 patients (0.7%). Neurological improvement occurred in all patients except for 2 cases (0.3%). There was also one patient who had vascular injury of the thoracic aorta. Perioperative and follow-up complications are summarized in Table 1. 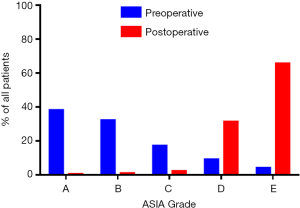 Case 1: the patient was a 38-year-old female with Pott’s C6 and C7 quadriparesis with bowel bladder involvement. A pre-treatment MRI demonstrated destruction of C6-C7 vertebrae and compression of spinal cord (Figure 2). Anterior surgical decompression by corpectomy was performed, followed by strut grafting with instrumentation. Decompression of cord and release of pus is demonstrated. Postoperative X-ray imaging demonstrated adequate fusion. After 4 months, the patient was able to regain movement with relieved pain. No recurrence of TB was noted in the follow-up period. 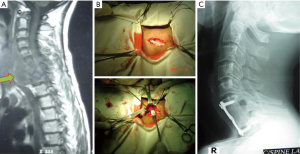 Figure 2 The patient was a 38-year-old female with Pott’s C6 and C7 quadriparesis with bowel bladder involvement. (A) Pre-treatment MRI demonstrated destruction of C6-C7 vertebrae and compression of spinal cord; (B) anterior surgical decompression by corpectomy was performed, followed by strut grafting with instrumentation. Decompression of cord and release of pus is demonstrated; (C) postoperative X-ray imaging demonstrated adequate fusion.

Case 3: the patient was a 30-year-old female with spinal TB at the L3 vertebrae with paraplegia and 45° kyphosis. Preoperative imaging demonstrated gross destruction of L3 vertebrae with spinal cord compression (Figure 4). Posterior decompression and stabilization by transpedicular screws and rods with posterior interbody fusion was performed. Follow-up imaging postoperatively demonstrated correction of kyphosis with radiological sign of gradual bone fusion. 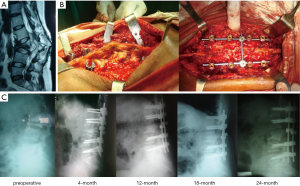 While TB is an ancient disease, this pathology continues to have a worldwide impact with an incidence rate of 9 million new cases per year and mortality rate of 2 million deaths per year (9,10). Conservative treatment options such as anti-TB drugs have limited efficacy in some cases, due to a rapid increase in drug resistance to first-line therapies (11). Furthermore, the duration of anti-TB chemotherapy still remains a concern for the patient and clinician, with some treatment programs lasting up to 18 months (12-14). Spinal TB in particularly accounts for 1-3% of all TB cases and over 40% of all spine infections (15). According to the World Health Organisation, Bangladesh is ranked 5th globally in terms of TB incidence, with over 70,000 deaths per year in this country alone. Spinal TB remains the most prevalent spine infection globally, and in cases with extensive spine involvement, vertebral body collapse or severe deformity, surgical options may be considered more appealing, allowing for simultaneous treatment of infection and deformity.

The indications for surgery have not changed significantly since the “middle path regimen” was proposed by Tuli in 1975 for spinal TB (13). This included four main criteria: (I) no sign of progressive neurological recovery despite a fair trial of conservative therapy for 3-4 weeks, (II) development of neurological complications during therapy, (III) patient with pre-vertebral cervical abscess, difficulty in deglutition and respiration, and (IV) advanced neurological involvement, with flaccid paralysis, severe flexor spasm, and bowel-bladder involvement. The goals of modern surgical management of spinal TB include debridement of diseased vertebrae, decompression of spinal cord, correction of deformities, stabilization of spine and further protection of the spinal cord. For spinal TB in the cervical spine, an anterior approach is most common. For the thoracic spine, several options are available including anterior and anterolateral decompression by thoraco-abdominal approach, and posteriorly there is costo-transversectomy and laminectomy. Particularly in the thoracic spine, there are more chances of deformity as the weight passes through the anterior column. The smaller canal also implies more thecal compression. For lumbar level spinal TB, posterior, anterior and antero-lateral are all viable options.

The results of the present study demonstrates that surgical treatment combined with chemotherapy is a safe and effective approach for treatment of spinal TB infections. The complication rates were generally low, with a rate of deep infections of 0.7% and a revision rate of 1.0%. Neurological improvement occurred in all patients except for 2 cases (0.3%). There was also one patient who had vascular injury of the thoracic aorta. Limitations of the present study include lack of statistical comparison between anterior versus posterior surgical approaches for spinal TB (16,17). A recent study comparing 25 spinal TB patients who underwent a posterior approach versus 22 patients undergoing an anterior approach in addition to debridement, interbody autografting and instrumentation did not demonstrate any significant differences in terms of operation duration, blood loss, body fusion, follow-up complications and neurological status. An anterior approach allows for direct access to the lesion, adequate visualisation of the lesion and complete decompression of the spinal cord (18). However, the posterior approach offers the advantage of superior posterior stabilization (19). Some studies have reported the use of a one-stage posterior circumferential fusion to avoid thoracotomy and thoraco-abdominal access (20,21), which may have detrimental stress on lungs, particularly in elderly and frail patients.

Our prospective series demonstrates that surgical treatment of spinal TB and Pott’s disease is safe and effective, with good clinical and radiological outcomes. The advantages of surgery include thoroughness of debridement, decompression of the spinal cord, and adequate spinal stabilization.