Arachnoid cysts are collections of cerebrospinal fluid lined by the arachnoid mater within the cranium and spine. A minority of arachnoid cysts occur within the spine (1,2) and most are asymptomatic, not requiring intervention (3,4). Spinal arachnoid cysts tend to occur within the thoracic and cervical regions, with lumbar arachnoid cysts rarely described in the literature (1,5-7). These are usually small in size (8). It is theorized that a valve like communication with the sub-arachnoid space may be an important factor in their enlargement (9,10). They usually present in patients 30–50 years old and can be extradural, intradural, or perineural (11). Their etiology is proposed to be congenital, traumatic, iatrogenic, and infectious (12,13). For specific cases, the pathogenesis is typically undetermined (14). Surgical intervention is rarely required (5). Indications for surgery are neurologic impairment due to mass effect and asymptomatic cyst expansion.

The authors report a case of an unusually large, symptomatic, extradural lumbar arachnoid cyst causing significant bony erosion of the pedicle and vertebral body in an otherwise healthy 38-year-old female. This is the first report detailing a cyst with the above-mentioned characteristics. We present the following article/case in accordance with the CARE reporting checklist (available at http://dx.doi.org/10.21037/jss-20-590).

A 38-year-old woman presented with 5 years of progressive weakness in her left leg (grade 4/5 quadriceps) with dysesthesias extending from her thigh to her left foot. Her symptoms had grown noticeably worse in the immediately preceding 6 months. Her medical history included appendectomy, cholecystectomy, cleft palate repair, gastric bypass, and thyroid disease. She had no history of trauma, infection, previous spine conditions, connective tissue disease, neurofibromatosis, or other cyst formation. In addition, the patient never had an epidural catheter placed, epidural or spinal injection, or CT myelogram performed.

A lumbar MRI without contrast revealed a large intraspinal fluid collection extending from L3 to L5, causing severe cauda equina compression with near complete erosion of the left L4 pedicle and the posterior superior portion of the L4 vertebral body (Figure 1). Plain radiographs demonstrate a benign appearing spine on lateral imaging, with a loss of the left L4 pedicle on the AP view (Figure 1). 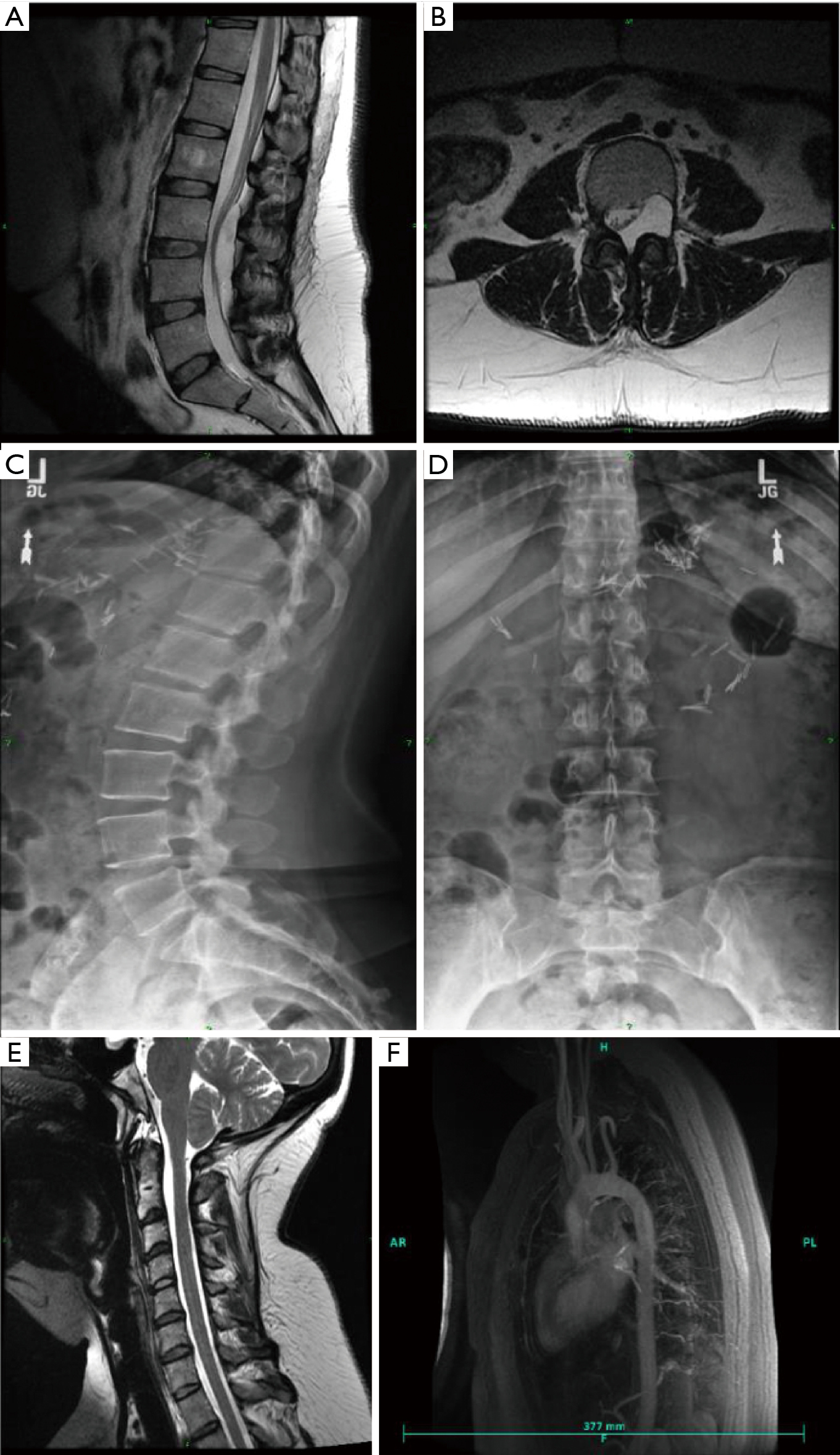 With the atypical imaging findings suggestive of dural ectasia, an MR angiogram and cervical MRI were performed to rule out disorders of the aorta and cervical spine. The aortic root appeared healthy (Figure 1). The cervical MRI revealed borderline Chiari malformation with no other significant cervical pathology (Figure 1).

Due to the likelihood for further worsening of symptoms, surgical intervention was recommended. The goals of surgery were to decompress the cauda equina and to preserve spinal stability. An L3–L5 posterior decompression and fusion procedure was thus recommended. A complete timeline of this case report can be found in Figure 2. All procedures performed in studies involving human participants were in accordance with the ethical standards of the institutional and/or national research committee(s) and with the Helsinki Declaration (as revised in 2013). Written informed consent was obtained from the patient.

A CSF drain was placed percutaneously at the L1–2 level prior to spine exposure.

Following a posterior midline exposure, pedicle screws were placed bilaterally at L3, on the right at L4, and bilaterally at L5. Titanium rods were placed with mild distraction to provide indirect neurologic compression and stabilization of the segment. A laminectomy of L3 and L4 was performed. A posterior fusion procedure was indicated due to the concern about potential for iatrogenic instability after a wide decompression in the presence of an incompetent L4 pedicle/facet complex

Once the cyst was visualized, a plane was developed between the thin-walled cyst and the dura using a blunt nerve probe. The distal end of the cyst was fully mobilized relative to the dura and affixed with a suture to aid in elevation of the cyst from distal to proximal (Figure 3). During the final stages of dissection, the site of communication between the cyst and the intra-dural space was encountered. Separation of the cyst from the dural stalk led to the abrupt deflation of the cyst and partial deflation of the dura. A nerve root was observed to herniate through the 2mm wide by 5mm long dura stalk opening and obstruct further CSF leakage. (Figure 3). The dural stalk opening was midline at the level of the L3 foramen. The defect was repaired with three 4-0 Neurolon sutures, with subsequent fibrin glue placement (Figure 3).

The excised cyst was sent to pathology due to its unusual presentation and was determined to be consistent with an arachnoid cyst with immunostaining for EMA highlighting the cyst lining meningothelial cells.

The patient experienced complete resolution of her pre-operative radiculopathy and returned to normal function without activity restrictions by two months after surgery (Figure 4).

Figure 4 Standing anteroposterior (A) and lateral (B) radiographs.

The authors present the case of an extraordinarily large arachnoid cyst that is atypical due to its location, size, dramatic bony erosion, and lack of discernable precipitating factors. Extradural arachnoid cysts typically occur in the thoracic region, with rare occurrences found in the lumbar spine. Lumbosacral cysts account for a small minority of identified spinal cysts, with two centers reporting that over a 7- and 10-year period, 81% and 77% of all spinal cysts identified were located in the thoracic region respectively (2,5,6). In addition, out of 20 patients who underwent surgical treatment for spinal cysts over a four-year period at another institution, there were no reported cases of lumbar arachnoid cysts (1).

While arachnoid cyst size may vary based on pathogenesis and the underlying mechanism of formation, most are relatively small and localized (10,15). It has been hypothesized that a ball-valve mechanism of formation, amongst others, may contribute to the enlargement in select cysts (5,6,9). The findings in this case of: a discrete connection between the dura and the cyst, the visualization of a nerve root transiently blocking CSF leakage from the thecal sac, the large cyst size, and bony erosion all support the one-way valve theory.

To the authors’ knowledge, the currently described case is the first extradural arachnoid cyst in the lumbar spine with subsequent bony erosion of the pedicle and vertebral body in the literature. While there are a few reports of bony erosion of the cranium with a variety of cysts, there is only one reported case of a lumbar arachnoid cyst with subsequent bony erosion; however, this was an intradural cyst with mainly vertebral body erosion (5). This was determined after a comprehensive review of the English medical literature using terms: arachnoid cyst, erosion, pedicle, vertebral body, lumbar, thoracic, contiguous, and all possible permutations and combinations of said terms. We theorize that the bony erosion resulted from the cyst expansion secondary to the one-way valve mechanism of communication. The concept is that a nerve root or dural flap located at the site of the connection between the dura and the cyst could allow egress of CSF into the cyst during times of peak intrathecal pressure, but not allow reversion of the pressure gradient. It is the theorized heightened pressure within the extra-dural cyst causes the cyst’s expansion, resultant dural compression, and eventual bony erosion.

Due to the apparent bony erosion and multi-level contiguous involvement, we considered various differential diagnosis. This included dural ectasia among others. Dural ectasia is typically associated with neurofibromatosis or connective tissue disorders and has radiographic findings of dural expansion and bony erosion. The patient’s lack of signs/symptoms of connective tissue disorders or neurofibromatosis, however, made such seem less likely. Concern regarding dural ectasia as the underlying disorder prompted the ordering of a thoracic MRI to rule out aortic root pathology and the existence of other foci of dural pathology within the thoracic spine.

Arachnoid cyst was also on our preoperative differential diagnosis. Such was considered less likely; however, as an extensive literature search did not identify any cases of an arachnoid cyst with bony erosion or multi-level contiguous involvement as was present in the current case. Additionally, while arachnoid cysts are a common incidental finding on intracranial imaging, their prevalence in the spine, and specifically the lumbar spine, is very rare (14,16).

This case represents a valuable addition to the literature on the abnormal presentation of arachnoid cysts, as well as to their potential methods of communication with the sub-arachnoid space. The current procedure involved a multi-level decompression and fusion, due to the size of the cyst, and concern for spine instability secondary to the bony erosion of the left L4 pedicle and the anticipated need for a wide decompression. Had we found more evidence in the literature supporting an arachnoid cyst presentation similar to our case, we may have rationalized the use of a preoperative myelogram CT to elicit additional information about the character of the dura-compression process, including the location of the cyst communication, without the need of the MR-angiogram or cervical spine MRI. Mishra, et al. 2017 describe the potential benefit of dynamic intraoperative MR myelography in determining the location cyst/dura communication (17). One can speculate that for the current case, were the nature of the cyst known and its stalk location well understood, a minimally invasive and focal stalk ligation and dural repair procedure might have been possible with avoidance of instrumented arthrodesis.

The authors report an unusually large, lumbar extradural arachnoid cyst in an otherwise healthy 38-year-old woman. This case has unique combined attributes that have not previously been reported with an arachnoid cyst: significant pedicle erosion, multi-level involvement, and location in the lumbar spine. The authors propose at CT-myelogram to be potentially useful in determining the precise location of communication between the cyst and dura. This case demonstrates the need for careful preoperative planning, and consideration for atypical presentations of cystic lesions.

Reporting Checklist: The authors have completed the CARE reporting checklist. Available at http://dx.doi.org/10.21037/jss-20-590

Conflicts of Interest: Both authors have completed the ICMJE uniform disclosure form (available at http://dx.doi.org/10.21037/jss-20-590). The authors have no conflicts of interest to declare.

Ethical Statement: The authors are accountable for all aspects of the work in ensuring that questions related to the accuracy or integrity of any part of the work are appropriately investigated and resolved. All procedures performed in studies involving human participants were in accordance with the ethical standards of the institutional and/or national research committee(s) and with the Helsinki Declaration (as revised in 2013). Written informed consent was obtained from the patient for publication of the Case report and any accompanying images.