Cervical spondylosis may present with a combination of neck pain, radiculopathy, and/or myelopathy. Any of these manifestations can impair a patient’s quality of life. Anterior cervical discectomy and fusion (ACDF) is the conventional surgical treatment when non-operative measures have failed to improve the patient’s symptoms (1-4). ACDF involves removing the intervertebral disc and fusing the adjacent vertebrae to stabilize the diseased segment(s). An interbody spacer (artificial or biologic) can be placed between the vertebrae, providing structural support, and serving as a fusion substrate scaffold. Smith and Robinson first described the ACDF procedure (4). They advocated iliac crest autograft as the interbody graft material, but this has been shown to be associated with donor site morbidity such as pain and infection (5). Interbody implants have been designed to avoid these complications while maintaining good fusion rates and clinical outcomes. Commonly used materials include allograft bone, metal, and polyetheretherketone (PEEK) (6). A number of studies have been performed to describe and compare the clinical efficacy of these materials (7-9). Most of these studies compared titanium to PEEK spacers. There are some regional preferences in interbody devices of choice—PEEK is most commonly used in Europe but allograft is more commonly used in the United States (6). There is a scarcity of literature showing a head to head comparison of PEEK and allograft spacers in the context of ACDF surgery and the incidence of postoperative symptomatic pseudarthrosis (10).

We retrospectively reviewed patients who underwent 1- or 2-level ACDF at a single spine center from January 2010 to December 2014. Subjects who had more than a 2-level ACDF, prior cervical spine surgery, local/systemic infection, neoplasm, or cervical trauma were excluded. Patients who were under 18 or over 70 years old or who did not consent to research were also excluded from this study. Patients requiring revision surgery for other reasons (e.g., adjacent segment level disease and kyphosis) were not included. This study was approved by the Allina Health Institutional Review Board (1046904-2) under Expedited review category #5, with a waiver of consent granted. Study outcomes will not affect the future management of the patients. Patients’ personal data have been secured for subject privacy.

All surgeries were performed under general anesthesia, by a left sided Smith-Robinson approach. After removal of the disc and decompression of neural structures, an interbody spacer was placed, either an allograft or PEEK cage. The type of spacer was based on surgeon’s preference. The graft or cage was sized to as much as possible fill the space between the uncinate processes and between the anterior and posterior edges of the endplates. A combination of locally harvested autograft and cancellous allograft chips was used in both PEEK and allograft interbody groups to augment fusion. In some cases, demineralized bone matrix (DBM) was added as a graft extender. Anterior plates and screws were used in all cases. Patients were discharged within 24–48 hours after surgery. A soft collar was used for comfort for 2 to 4 weeks following surgery. Revision surgery for patients with symptomatic pseudarthrosis is typically posterior instrumented fusion with local autograft with or without allograft at our practice.

Data were extracted from the patients’ electronic health records within our local hospital.

Subjects were divided into two cohorts, allograft and PEEK, to compare demographics, functional outcomes, reoperation rates, and subsidence. Data were analyzed using SPSS 12.0 (SPS, Inc., Chicago, IL, USA). Statistical tests included chi-square or Fisher’s exact tests for categorical variables and Student’s t-tests and paired t-tests for continuous variables. Two multinomial logistic regression analyses were conducted with material (allograft or PEEK) and number of levels (1 or 2) as independent categorical variables and dependent outcomes of pseudarthrosis or subsidence. The threshold for statistical significance was P=0.05. Additional statistical analyses on functional outcomes, plate type and graft type were conducted by dividing subjects into cohorts according to subsidence or pseudarthrosis.

A total of 209 patients (91 males and 118 females) who met the selection criteria with a 21-month minimum follow up were analyzed. Median follow-up was 24 months in the allograft group (range 21 to 80) and 24 months in the PEEK group (range 21 to 49). One hundred and sixty-seven patients had an allograft spacer and 42 patients had a PEEK spacer. There was no significant difference in demographics, smoking status, or workers compensation status between the two groups (Table 1). All patients received anterior plates and screws.

Patients improved significantly when comparing index preoperative and final follow-up NDI, VAS-neck, and VAS-arm (P<0.01, P<0.01, and P=0.02, respectively). Allograft and PEEK cohorts were not statistically different with respect to improvements in patient-reported outcomes (Figure 1). The proportions of patients who achieved minimal clinically important difference (MCID) in patient-reported outcomes were not different between cohorts (Table 2).

The rate of revision surgery for pseudarthrosis was 8% (13/167) in the allograft group and 14% (6/42) in PEEK patients; this difference was not statistically significant (P=0.19) (Table 3). Pseudarthrosis rate was not significantly different between 1- and 2-level surgeries with respect to interbody material type (allograft or PEEK) and number of levels (1 or 2) (P=0.07). In allograft bone cases, there was a trend toward more pseudarthrosis in 2-level cases, but this was not significant (P=0.06, Pearson’s correlation coefficient). Patients who developed symptomatic pseudarthrosis had significantly less function (higher NDI scores) at final follow-up compared to asymptomatic patients (P=0.02) (Figure 2). However, this difference was not observed in the VAS-neck and VAS-arm. The proportions of patients who achieved MCID in patient-reported outcomes were not different (Table 4).

Of the 209 patients included in the study, 135 had radiographs that allowed measurement of subsidence with a minimum 1 year follow up. Figures 3-6 depict typical examples of radiographic outcomes. The rates of subsidence were 31% in the allograft group and 29% among the PEEK patients (Table 3). This difference was not statistically significant (P=0.82). Subsidence and pseudarthrosis trended together, but there was no statistically significant association between clinical outcomes and subsidence (Table 5). Subsidence was not significantly different between 1- and 2-level surgeries with respect to interbody material type (allograft or PEEK) and number of levels (1 or 2) (P=0.65). Patients who developed subsidence had a significantly less function (higher NDI scores) at final follow-up compared to asymptomatic patients (P=0.01). However, this difference was not observed in the VAS-neck and VAS-arm (Figure 7). The proportions of patients who achieved MCID in patient-reported outcomes were not different (Table 6). There were five groups for grafting technique (Table 7). There were no differences in subsidence or reoperation for according to graft type. There were no differences in subsidence or reoperations between the allograft and PEEK cohorts with respect to plate manufacturer (data not shown). 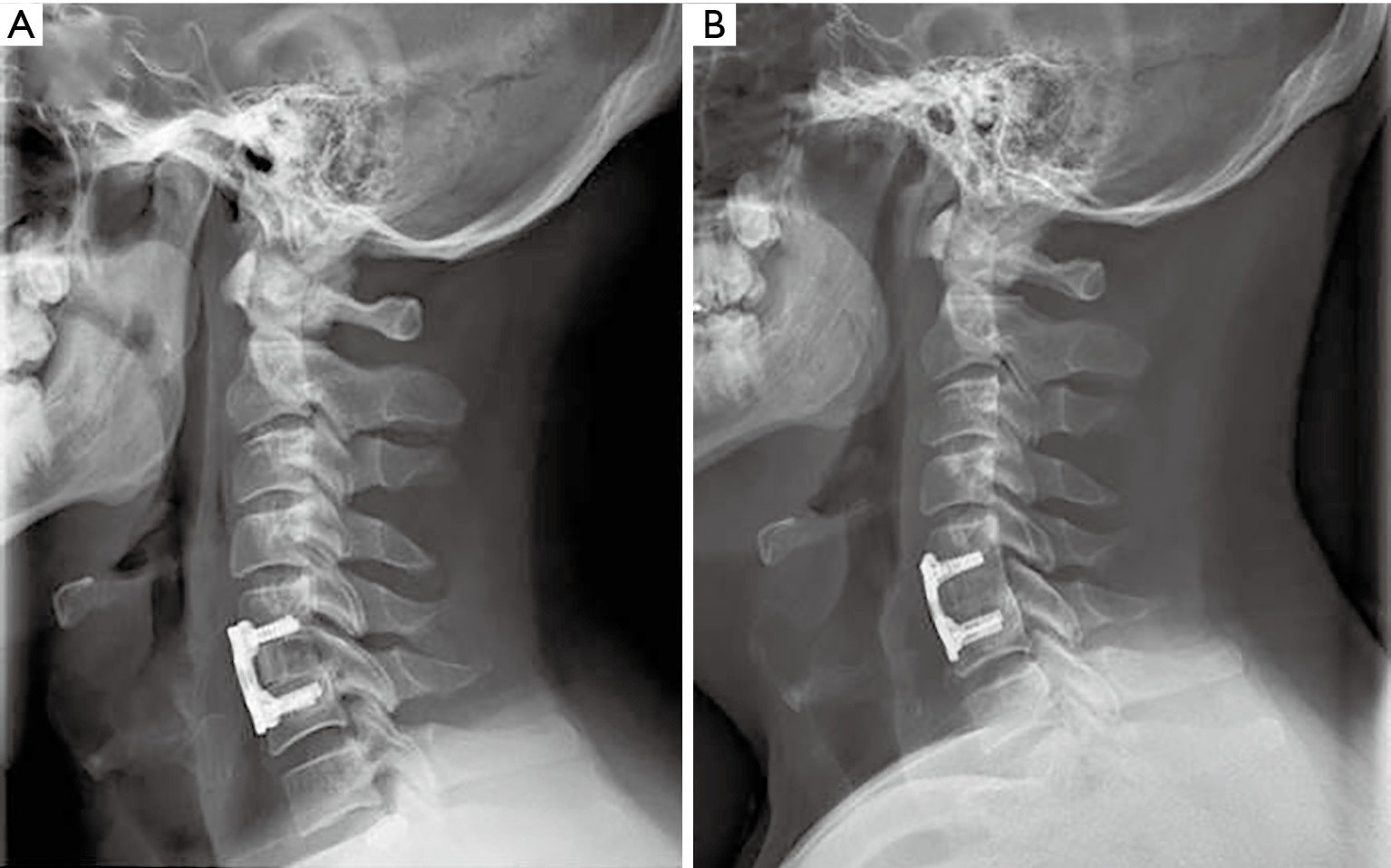 Figure 3 Radiographs of a C5/6 ACDF using an allograft spacer at 6 weeks (A). At 2 years there is bridging bone and no subsidence, indicating a robust fusion (B). ACDF, anterior cervical discectomy and fusion. 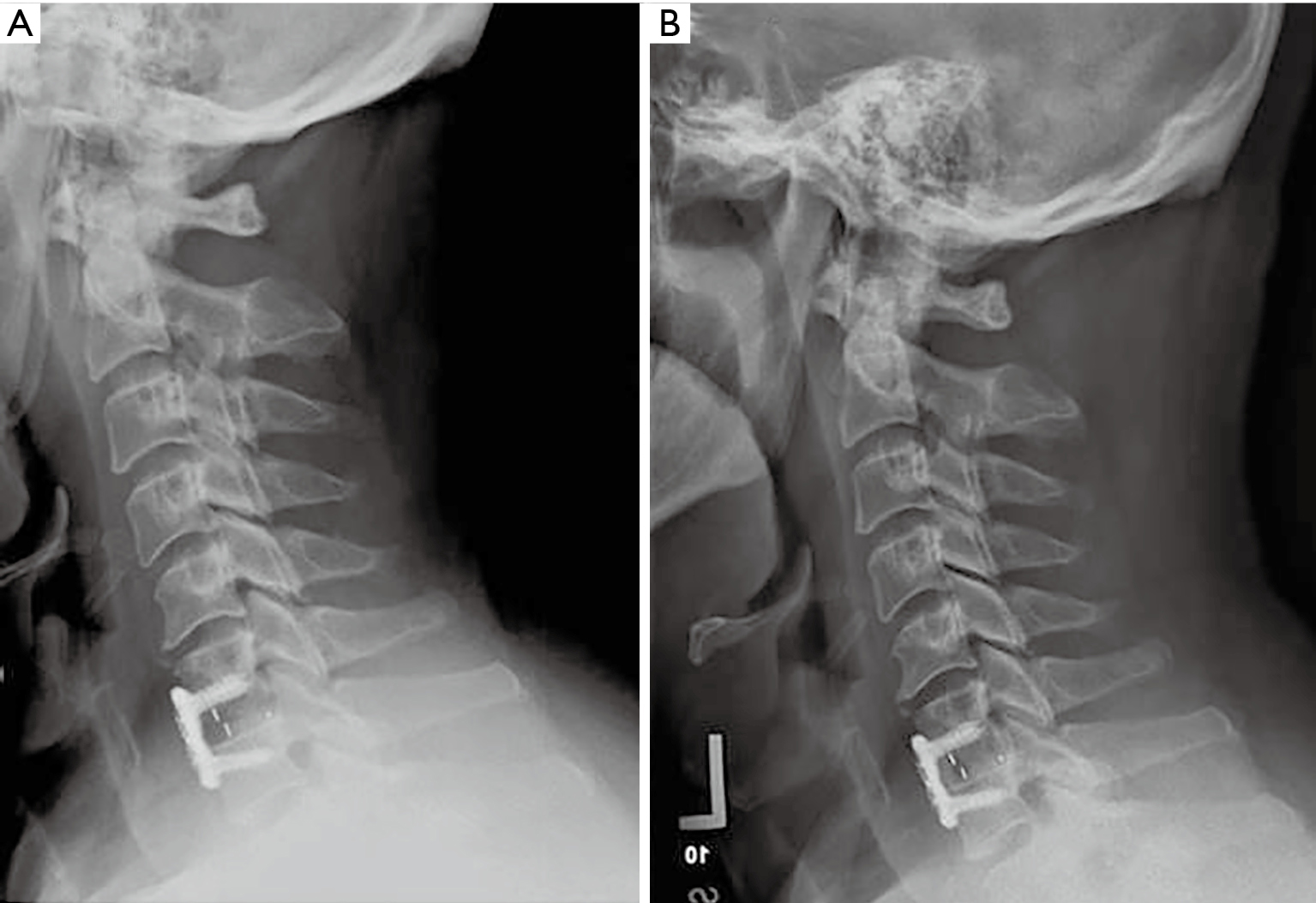 Figure 4 Radiographs of a C6/7 ACDF using a PEEK spacer at 6 weeks (A). At 2 years there is bridging bone and no subsidence, indicating a robust fusion (B). ACDF, anterior cervical discectomy and fusion; PEEK, polyetheretherketone. 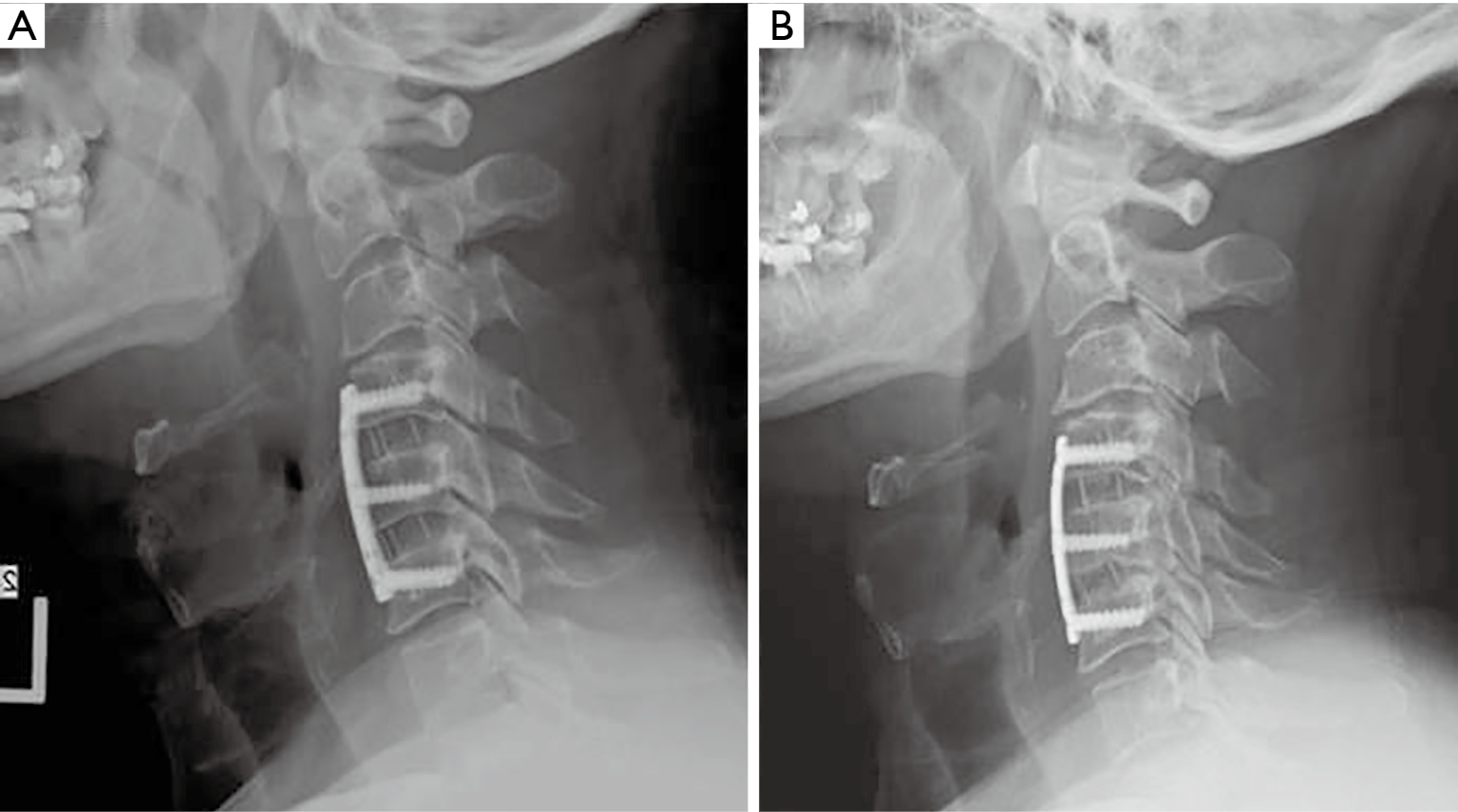 Figure 5 Radiographs of a C4–6 ACDF using a PEEK spacer at 6 weeks (A). At 2 years there is subsidence of the spacers into the vertebral endplates (B). ACDF, anterior cervical discectomy and fusion; PEEK, polyetheretherketone. 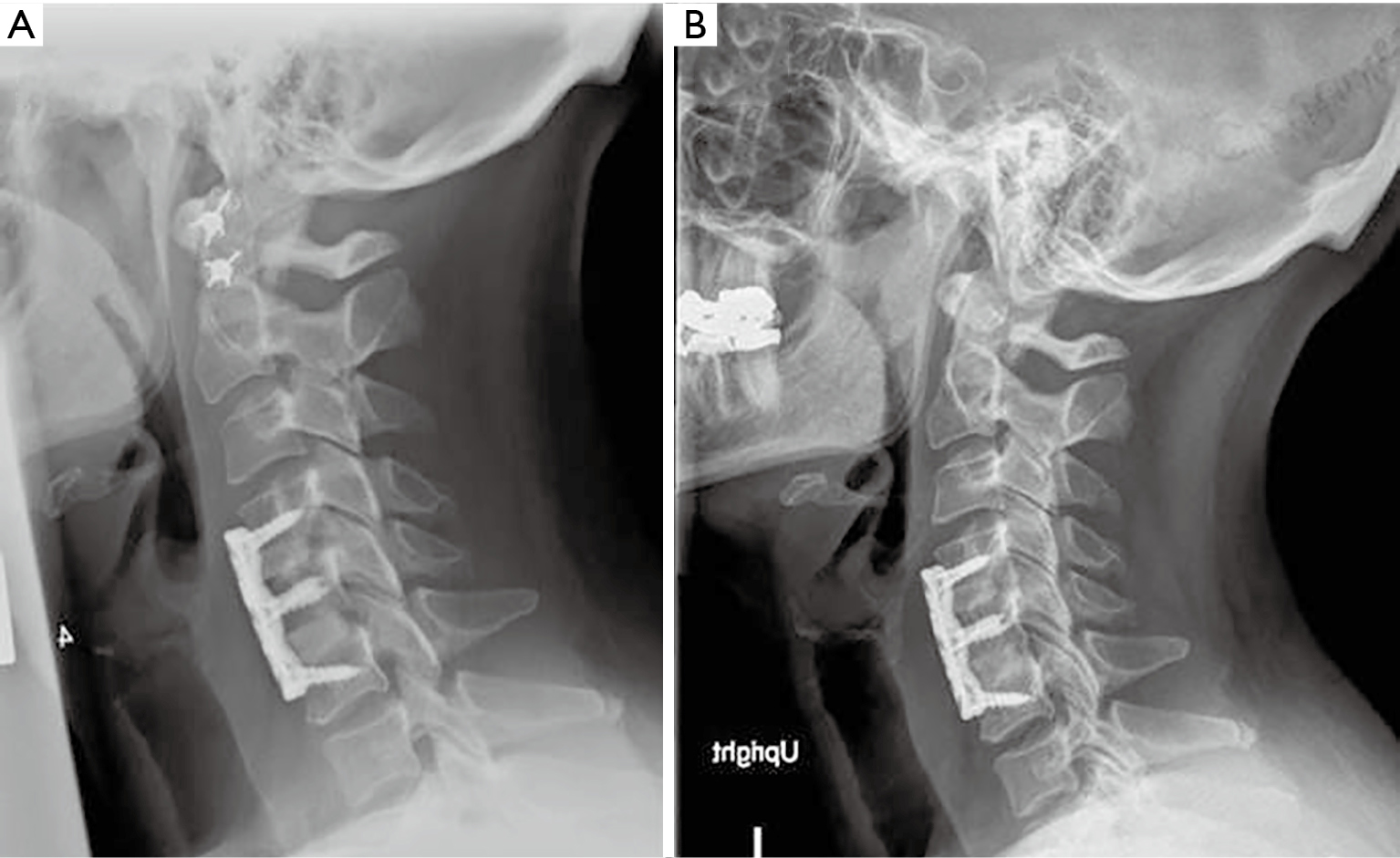 Figure 6 Radiographs of a C4–6 ACDF using an allograft spacer at 6 weeks (A). At 2 years there is subsidence of the spacers into the vertebral endplates (B). ACDF, anterior cervical discectomy and fusion.

Allograft and PEEK are the most commonly used spacers for ACDF surgery (11). Good and excellent outcomes have been reported for both (12-14). However, Krause et al. reported a lower rate of pseudarthrosis among allograft patients compared to PEEK in 1-level ACDF (10). Likewise, Pirkle et al. reported a higher union rate with allograft compared to other cages such as PEEK, titanium and porous mesh metal (9). The current study is in concordance with the above trends: revision surgery for pseudarthrosis was 8% for allograft bone and 14% for PEEK, however, this difference was not statistically significant.

In this study, revision surgery for pseudarthrosis was 8% for allograft bone and 14% for PEEK spacers in 1- or 2-level ACDF. These results are comparable to the literature. Reoperation rates for pseudarthrosis was almost twice as high in the PEEK group compared to allograft, though this was not statistically significant. Nonetheless, revision surgery for any reason may be considered to be clinically significant. Patients needing a revision do not do as well functionally as those who do not receive a revision. As such, this information could be useful in clinical practice and surgeons will want to be aware of the potentially higher revision rate for PEEK.

We found that the symptomatic pseudarthrosis rate was not different between 1- and 2-level surgeries. Veeravagu et al. reported that the rate of reoperations increases with increasing number of levels fused (31). The reasons for the difference between their study and ours may be that we included only reoperations for symptomatic pseudarthrosis and only considered allograft and PEEK as interbody materials. Veeravagu did not differentiate for interbody type or reasons for reoperation. Likewise, we found that subsidence did not depend on the number of levels. Our result agrees with Lin et al. (14). They found no difference in subsidence between 1-, 2-, and 3-level reconstructions among ACDF procedures using a PEEK interbody cage.

Limitations to this study include those inherent of any retrospective review. However, given the paucity of data regarding this topic this represents the first step towards a higher level study (randomized prospective trial) to answer the research question of which spacer option has a higher association with symptomatic pseudarthrosis following 1- or 2-level ACDF. Secondly, the disproportion sample sizes (allograft, 167 patients, and PEEK, 42 patients) may have an effect on the results. We note, however, that this disparity mirrors North American surgeon preferences for allograft over PEEK (6). Third, we studied only symptomatic pseudarthrosis. Other important diagnoses that may require revision surgery (e.g., adjacent segment level disease and kyphosis) are not included (11). Fourth, all of our subjects were plated. Therefore, we are unable to study this as a factor. However, the question “to plate or not to plate” has been the considerably discussed elsewhere in the literature (32). Finally, differences in surgical techniques have the potential to affect outcomes. The projected effects of these technical differences on fusion and symptomatic pseudarthrosis are difficult to assess given the nature of the study. A future prospective study by a single surgeon, comparing both PEEK and allograft with equal number of patients in each group could yield more definitive conclusions to the research question.

Ethical Statement: The authors are accountable for all aspects of the work in ensuring that questions related to the accuracy or integrity of any part of the work are appropriately investigated and resolved. The study was conducted in accordance with the Declaration of Helsinki (as revised in 2013). This study was approved by the Allina Health Institutional Review Board (1046904-2) under Expedited review category #5, with a waiver of consent granted. Study outcomes will not affect the future management of the patients. Patients’ personal data have been secured for subject privacy.