Anterior cervical discectomy and fusion (ACDF) is among the most common cervical spine procedures and has well-established efficacy in the surgical management of degenerative disc disease. Injury to the recurrent laryngeal nerve (RLN) is a common and important complication of ACDF, with reported incidence ranging from 0.2–16.7% (1-7). Injury to the nerve may occur via direct intraoperative contact, or indirectly due to compression secondary to traction, endotracheal cuff inflation or intubation (8,9). The clinical manifestations of RLN palsy include dysphagia, dysphonia and aspiration, and while these symptoms are often transient, mild and amenable to conservative management a minority of patients experience persistent deficit and may require interventional treatment such as with thyroplasty or tracheostomy (10).

There remains some uncertainty surrounding predisposing factors for RLN palsy following ACDF. In addition to risk factors such as increased intraoperative time (11,12) and female sex (13,14), many studies suggest that a right-sided approach increases the risk of RLN palsy (4,15-17), possibly due to the shorter and more oblique course of the RLN on the right (10). However, other papers have found no significant differences between left- and right-sided ACDF procedures (18). Similarly, in several studies the number of operated levels has been associated with RLN palsy incidence, and so is a potential risk factor (19). However, many of these papers address cervical spine surgery generally, rather than ACDF specifically, and other studies have not replicated the association (10,18). Inconsistencies between studies in the length of follow-up also raise uncertainty regarding the persistence of any relationship and its relevance for long-term RLN palsy compared to transient postoperative deficit. This meta-analysis was conducted to examine the relationship between the number of operated levels and short- and long-term RLN palsy following ACDF. We present the article in accordance with the PRISMA reporting checklist. Available at http://dx.doi.org/10.21037/jss-20-508.

We conducted a systematic review of the medical literature following the PRISMA statement for systematic reviews and meta-analyses (20). On June 7, 2019, we performed an electronic search in four major databases: PubMed, the Cochrane Central Register of Controlled Trials (CENTRAL), ScienceDirect, and Google Scholar. Search terms included “anterior cervical discectomy and fusion”, “ACDF”, “recurrent laryngeal nerve injury” and “recurrent laryngeal nerve palsy”, with no limits applied. A further manual search of the reference lists of all included articles was also performed.

In terms of selection criteria, we have included all original studies that reported the rate of RLN injury for patients who had ACDF for degenerative disease, myelopathy, cervical canal stenosis, or ossification of posterior longitudinal ligament. We applied no restrictions on publication date, language or participant demographic data. We excluded case reports, reviews, letters, abstract-only articles, or duplicated studies. We also excluded studies that reported ACDF for trauma patients or did not report the rate of RLN injury for each ACDF surgical level.

Two reviewers independently screened all selected titles and abstracts to identify articles for potential inclusion. When an abstract was included by at least one reviewer, the full-text article was retrieved and evaluated for inclusion by two investigators. Discrepancies and disagreements were resolved by discussion and consensus with senior reviewers.

Two reviewers were responsible for data extraction. A Microsoft Excel template was used to report baseline characteristics and inspected outcomes, including the number of ACDF levels, the incidence of RLN palsy and the method of RLN palsy assessment. Extra modifications were applied after reviewer discussion and consensus with the supervisor when required. All data was confirmed by multiple reviewers, and study quality was similarly independently assessed by multiple authors.

Ethics approval was not required for this study given the exclusive use of previously published data.

All data were analysed using R software version 3.6.1 (21). Using “meta” package, outcome of RLN injury was analysed to compute the pooled odds ratio (OR) (22). The corresponding 95% confidence intervals (CI) of pooled effect size were calculated using a fixed-effects or random-effects model depending on the presence of heterogeneity. Heterogeneity was assessed with Q statistics and the I2 test, with significance set at an I2 value >50% or P value <0.05 (23). Moreover, the RLN injury outcome was categorized according to the follow-up period to <12 months, 12–24 months and >24 months. Comparison of single-level vs. multiple-level ACDF, and individual comparisons for each level, were also conducted.

Publication bias could not be assessed using Egger’s regression test due to the small number of included studies (less than 10) (24,25). A leave-one-out sensitivity analysis was performed by respectively removing one study at a time to assess the evidence and to test if the findings were driven by a single study.

A total of 910 papers were identified during the database searches (Figure 1). Of the 319 studies remaining after the removal of duplicates and title and abstract screening, 5 ultimately met the criteria for inclusion in the meta-analysis (2,10,18,19,26). Common reasons for exclusion included reporting for cervical spine surgery generally rather than for ACDF specifically, and outcomes that were not stratified by the ACDF level. The included studies contained a total of 3,514 patients who underwent ACDF procedures. 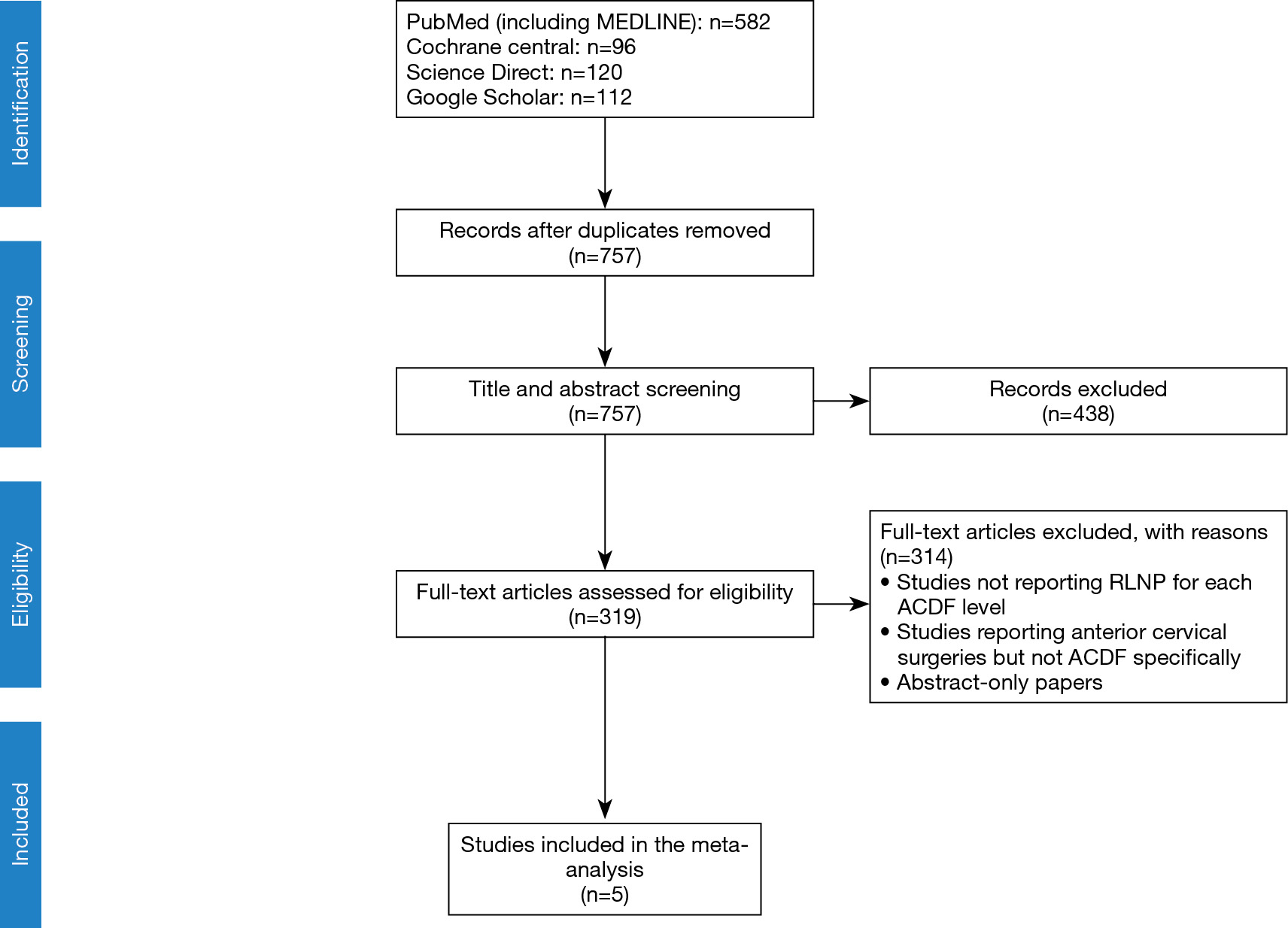 The study characteristics are described in Table 1. All studies but one (19) were retrospective cohort studies. The patients were 50.1% male, with a mean age ranging from 46.94 to 57.77 years. The mean duration of patient follow-up ranged from 2.2 to 26.4 months, with 3 studies reporting follow-up <12 months and 2 studies reporting follow-up >12 months. All studies included single- and two-level ACDF procedures, several (2,10,19) additionally included three-level procedures and Nanda included 2 cases of 4-level ACDF. Quality assessment was calculated using the Newcastle-Ottawa quality assessment form for cohort studies (27), with each of the included studies scoring 7.

When stratified by length of follow-up, 2,384 patients had follow-up of less than 12 months following surgery, while 1,130 had follow-up of greater than 12 months (Table 3). Comparison of RLN palsy following multiple- and single-level ACDF in these subgroups demonstrated no statistically significant difference within or between groups (P=0.532 and P=0.247, respectively) (Figure 3).

Our analysis demonstrated no statistically significant relationship between the rate of RLN palsy and the number of ACDF operative levels. This was true also when studies were stratified based on the length of follow-up, which suggests that the single- and multiple-level ACDF have a similar risk of both short-term, transient RLN palsy and of long-term, permanent deficit. To our knowledge, this is the first meta-analysis exploring the impact of the number of operative levels on RLN palsy following ACDF.

The RLN palsy incidence of 1.2% found across our included studies is consistent with the range reported elsewhere (1,3-7). Although several studies have suggested somewhat higher rates of RLN palsy, many relied on clinical definitions alone and did not confirm suspected cases with laryngoscopy. Even the studies included in this meta-analysis, 3 of which confirmed the presence of RLN palsy with appropriate investigations, likely underestimate the true incidence of nerve damage. In their prospective study, Jung et al. performed pre- and post-operative laryngoscopy on all patients to demonstrate an overall RLN palsy incidence of 24.2%, although the incidence of symptomatic palsy was somewhat lower at 8.3% (7). However, asymptomatic RLN injury is not without clinical consequence, deriving a risk of bilateral RLN palsy with subsequent surgery that likely accounts for the substantially higher rate of dysphagia and dysphonia after repeat ACDF (28).

Many previous studies have raised the possibility of increased RLN injury with an increased number of operative levels (12-14,29-32). For example, Danto et al. demonstrated a 4-fold increase in dysphagia and/or dysphonia in patients undergoing ACDF at 4 or 5 cervical levels compared to those undergoing single level procedures (14). However, in this study and in many others dysphagia and dysphonia were assessed clinically, often via self-reported questionnaires, and therefore cannot be considered synonymous with RLN palsy. In the case of both dysphagia and dysphonia, RLN injury is not the only causative mechanism and the symptoms may instead be related to postoperative changes such as soft tissue swelling, fibrosis and oesophageal dysmotility (33). The discordance between dysphagia and RLN palsy is evident in the differing reported incidence of each complication; the incidence of dysphagia following anterior cervical spine surgery is as high as 79% in some series (33), compared to the much lower reported rates of true RLN palsy. It is theoretically plausible that multi-level procedures, which are typically longer and more invasive than single-level operations, result in more extensive postoperative oedema and therefore in more frequent dysphagia without necessarily increasing the risk of RLN injury.

Another potentially relevant difference between many previous studies and those included in this meta-analysis is the inclusion of anterior cervical spine procedures other than ACDF. Several series (12,31) that have found an association between the number of operative levels and RLN palsy or dysphagia examined anterior cervical spine surgery more generally, and in addition to ACDF included procedures such as cervical corpectomy. Although less common than ACDF and accounting for a relatively small proportion of these studies, corpectomy generally requires more extensive dissection and may be subject to associations that are not similarly true of ACDF (10).

An important weakness of this meta-analysis is the reliance on retrospective studies, with only 1 included study being prospective. There is also the possibility of differences in the measurement of RLN palsy; 3 studies were consistent in their use of direct vocal cord visualization via laryngoscopy; however, the remaining 2 studies did not specify their methodology and may have relied on clinical and subjective dysphagia and/or dysphonia. The inclusion of studies and therefore the sample size was also limited by the consistency and documentation of follow-up in some studies, which we considered essential for the differentiation of transient and long-term RLN palsy. Lastly, the use of pooled rather than patient-level data is a weakness that may give rise to confounding effect. Several variables which have been previously shown to influence the rate of RLN palsy were not included in our analysis and so could not be controlled, including sex (13,14), age (12), operative time (11,12), side of ACDF approach (4,15-17) and recurrent ACDF (28).

This meta-analysis of the current literature identifies the incidence of RLN palsy following ACDF to be 1.2%, with no statistically significant differences in risk between single- and multiple-level ACDF procedures. This is true for both short-term RLN palsies and for those present >12 months after surgery. These findings suggest that multiple-level ACDF can be performed safely and without increased risk of RLN injury.

Reporting Checklist: The authors have completed the PRISMA reporting checklist. Available at http://dx.doi.org/10.21037/jss-20-508