Cervical spine degenerative conditions effect up to two-thirds of the population and are the most common cause of acquired disability in patients over the age of 50 (1,2). These disorders commonly present with axial pain, myelopathy, radiculopathy or a combination of these symptoms. Treatment options can be classified as non-operative or operative. Non-operative treatments include analgesia and physiotherapy, and are useful primarily in cases without significant cord compression. Surgical intervention is generally indicated in with failure of conservative management or with evidence of cord compression or myelopathy (3). Factors like age, comorbidities and radiological findings are also taken into consideration when planning treatment (4,5). Multiple operative approaches have surfaced over the years with a trend changing from posterior to anterior approach particularly in 1955 when Smith and Robinson first described their technique for the anterior cervical spine approach (6,7). The optimum approach has been a source of ongoing debate and numerous studies, with remaining uncertainty about the superiority of anterior, posterior or combined techniques. Ideally, the choice of approach should be made based on patient-specific anatomic factors, the location of compressive pathology, extent of disease, imaging findings and overall medical comorbidities (3). However, the specific advantages and disadvantages of each surgical technique often complicate the management of cervical disc diseases.

Despite the overall good outcomes of anterior cervical operations, there is the potential for complications including anatomical injury to the oesophagus, vertebral and carotid arteries, vagus nerve and internal jugular vein. In the early postoperative period, dysphagia is a particularly common adverse effect (10-12). In one series, Rihn et al. (13) reported postoperative dysphagia rates of 71% following anterior cervical spine surgery. The cause of dysphagia is multifactorial, and may include oesophageal denervation, haematoma formation, nerve root injury and soft tissue swelling (14-16). Where nervous injury is involved, damage occurs to the pharyngeal plexus for surgeries at spinal levels C2 to C5, the superior laryngeal nerves for surgeries at C3 to C4, the recurrent laryngeal nerves for surgeries at C5 to T1 and the hypoglossal nerve for operations above C3 (14).

Anterior approaches may be used to treat cervical degenerative diseases at up to eight cervical levels, and although several studies have reported an increase in complications such as dysphagia with multiple-level procedures (17-20) there are no meta-analyses providing high-quality evidence of this relationship. Previous meta-analysis have focused on the relationship between dysphagia and other variables such as autograft vs. allograft usage (21) and the use of Zero-profile implant systems (22). The aim of this meta-analysis was to investigate dysphagia following single-level and multiple-level anterior cervical discectomy and fusion (ACDF) surgery.

This systematic review was conducted and reported in accordance with the preferred reporting items for systematic review and network meta-analysis checklist (PRISMA-NMA). A comprehensive search for eligible studies was conducted through the following databases: PubMed, Cochrane Central, Science Direct, and Google Scholar. We adopted the string search technique: [((Anterior AND Cervical AND Fusion) OR ACDF) AND (Dysphagia OR Swallowing disorders OR Swallowing dysfunction OR Hoarseness)], and adjusted it to each database accordingly.

We included all original studies that reported the rate of dysphagia as an outcome or endpoint for patients who underwent ACDF for degenerative disease, myelopathy, cervical canal stenosis, or ossification of the posterior longitudinal ligament. No restrictions on publication date and language or participant age, sex, race, place or ethnicity were applied. We excluded case reports, reviews, letters, abstract-only articles, and duplicated studies. Studies that did not report the surgical level of ACDF or reported ACDF for trauma patients were also excluded.

Two independent reviewers screened and extracted the data of the eligible studies. Extracted data included the author’s last name, year of publication, country, study design, sample number, dysphagia grading system, follow up time (endpoint), age and sex of the patients, and the number of surgical levels compared. Moreover, two independent reviewers assessed the quality of the included studies by using the Newcastle-Ottawa Quality Assessment Score for Cohort Studies (NOQAS) (23). This tool assesses three main domains in each study including the selection, comparability, and outcome with a score assigned to each and a total final score out of nine points.

Ethics approval was not required for this study given the exclusive use of previously published data.

Statistical analysis was performed using R software version 3.2.5. Due to having I2<50% and P<0.10 in the majority of the analyses, the fixed effect model was adopted. Direct comparison meta-analysis between single and multiple levels of ACDF was done and presented in the form of odds ratio (OR). Subgroup analysis was done based on the final follow up point in each study and sensitivity analysis by each time omitting one study was done to test for the robustness of the results. Funnel plot along with Egger’s test were used to test for risk of publication bias. 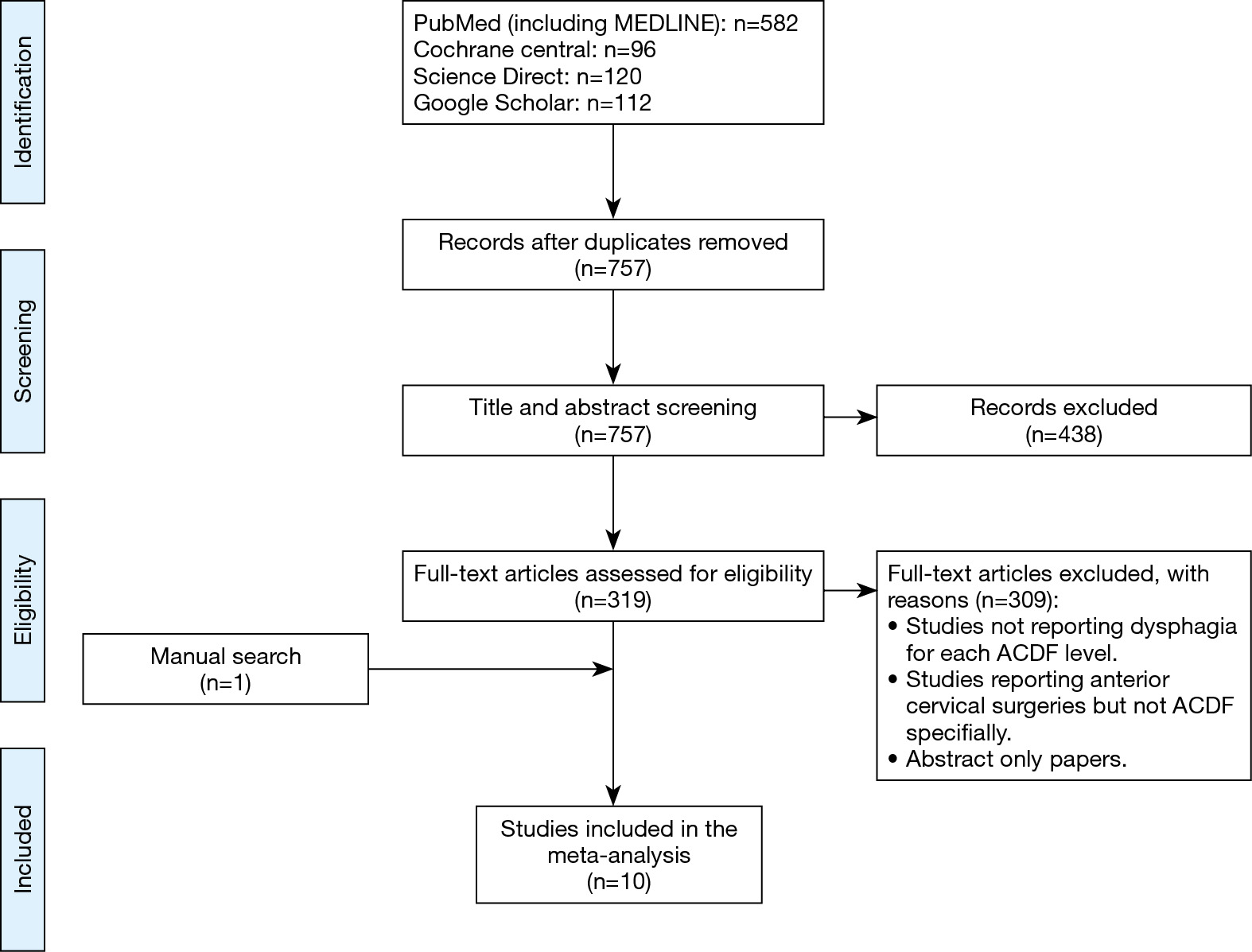 The 10 studies included were published from 2005 to 2017 and all were published in English. Seven studies were retrospective and 3 were prospective cohort studies. All studies reported the incidence of dysphagia following multi-level ACDF and single-level ACDF.

Newcastle Ottawa Quality Assessment Scale (NOQAS) with a maximum of 9 points was applied to evaluate the quality of selection for cohort studies in terms of exposure, comparability and outcomes. Among the 10 studies, 2 studies scored 8 points, 7 studies scored 7 points and 1 study scored 6 points as shown in Table 1. Thus, the selected studies were of relatively high quality. 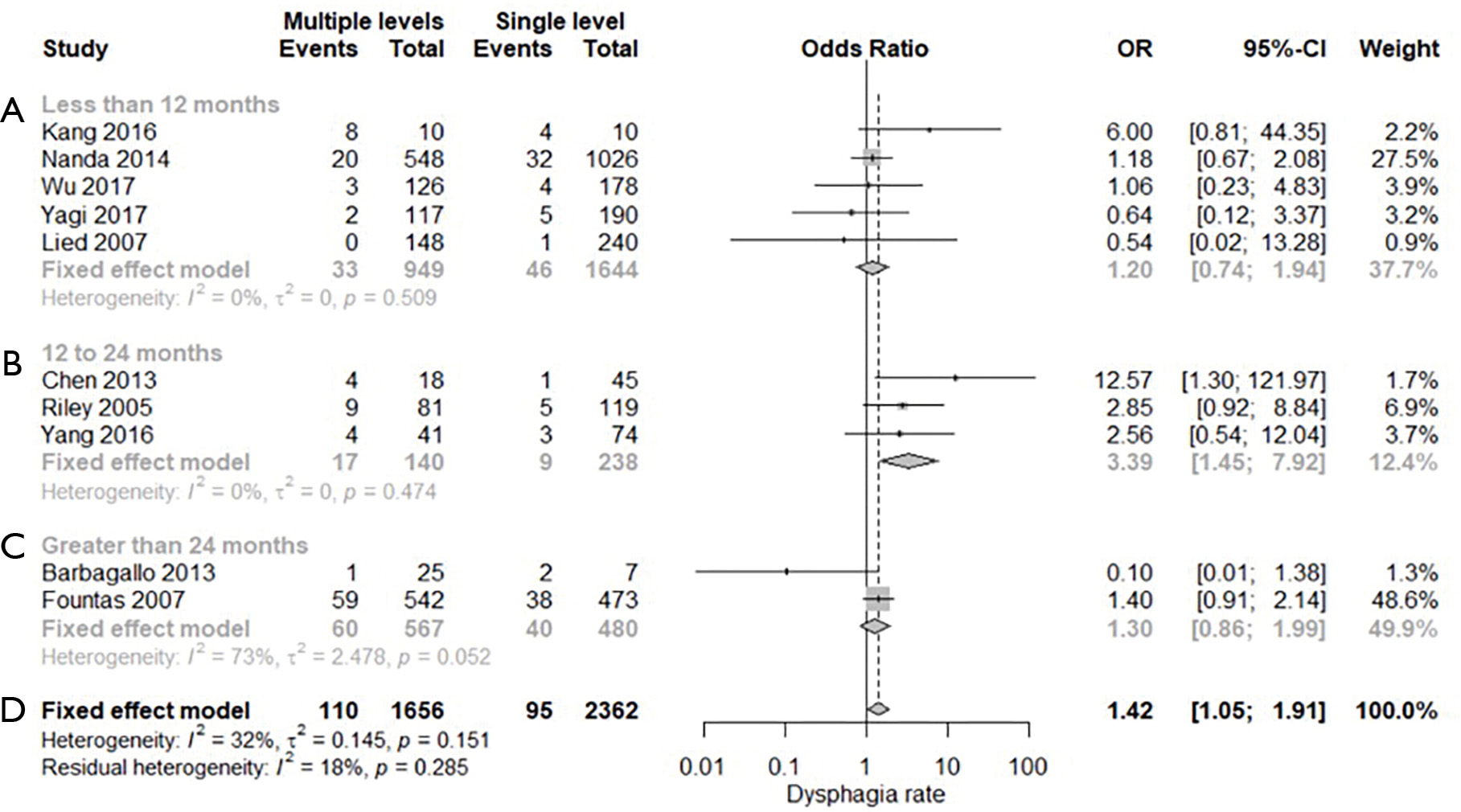 Figure 2 Rates of dysphagia for single- and multi-level ACDF surgery for studies with follow-up of <12 months (A), 12–24 months (B), >24 months (C) and overall (D). ACDF, anterior cervical discectomy and fusion.

Three studies (25,27,29) reported three-level and single-level ACDF, and were compared (without grouping by length of follow-up) (Figure 4). The fixed effect model results demonstrated a higher dysphagia rate among patients treated with three-level ACDF (13.7%) compared to those treated with single-level ACDF (4.4%) (P heterogeneity =0.224, OR =2.41, 95% CI: 1.51–3.85, I2=33%). This difference was statistically significant.

Assessment of publication bias for all included studies was conducted using a generated Funnel plot. The Egger’s test was performed to statistically evaluate funnel plot symmetry. The results showed that no publication bias was observed.

This data may be useful during the surgical decision-making process; dysphagia is a common and disabling complication of anterior cervical spine surgery (13,28,33-36) that is often underestimated by surgeons (25,33,36). For example, Edwards et al. (34) demonstrated that dysphagia reported in patient surveys following ACDF was underreported in the surgical records in 80% of cases.

The overall increased risk of dysphagia associated with multiple-level ACDF has been previously suggested by several studies (37-39). This relationship may be related to a variety of factors including increased operative time, increased time of oesophageal retraction, larger incisions and more extensive tissue dissection, horizontal vs. vertical incisions, greater overall trauma and larger, more intrusive spinal implants. Many of these factors have been previously shown to influence dysphagia rates. For example, in their 2012 paper Danto et al. (38) demonstrated statistically significant relationships between dysphagia and surgery duration, and between dysphagia and the incision orientation (horizontal incisions are often used for 1–2 level procedures, whereas vertical incisions may be required for fusions at 3–5 levels).

In their prospective cohort study, Lee et al. (39) demonstrated greater dysphagia rates for multiple-level ACDF than for single-level procedures, however as with our results this difference was statistically significant only at >1 year follow-up. It is possible that transient postoperative dysphagia, for example due to postoperative soft tissue swelling and oesophageal retraction injury, occurs commonly and relatively equally following both single- and multiple-level ACDF, but that long-term deficit, for example due to nerve injury, is more common after multiple-level procedures. Indeed, some authors have suggested that in the immediate postoperative period dysphagia should not be considered a complication but rather an inevitable outcome of the procedure (38,40), and this principle applies equally to single- and multiple-level surgeries. The difference in dysphagia rate over time is important when weighing the benefits and risks of a multiple-level procedure; compared to single-level ACDF, multiple-level ACDF may have a similar dysphagia risk in the immediate postoperative period but is more likely to cause long-term symptoms and therefore poses a greater risk to patient functionality and wellbeing. Our findings also emphasise the importance of long-term follow-up and monitoring particularly after multiple-level ACDF, reflecting an awareness that complications such as dysphagia may be more severe or persistent than would be expected for a single-level procedure. If identified, ongoing dysphagia can be evaluated clinically and with investigations such as plain cervical radiographs to exclude structural causes such as retropharyngeal abscesses, laryngoscopy and videofluoroscopic swallow evaluation. Treatment of long-term dysphagia depends on its severity and underlying cause, but most commonly involves behavioural measures such as dietary modification, education, postural changes and swallowing techniques. In rare cases further intervention may be required, for example with vocal cord medialisation or, in severe cases, nasogastric feeding tubes to manage aspiration risk and nutritional deficits (41).

The lack of statistical significance in our meta-analysis beyond 24 months may suggest a convergence of the dysphagia rates over the long-term as postoperative injuries continue to heal, or may reflect a lack of statistical power given that only 2 studies reported outcomes at this duration. Several studies have demonstrated low dysphagia rates at >24 months (13,37,42), and the small sample sizes may therefore limit statistical analysis. For example, in Wang et al.’s (37) multicentre retrospective study, dysphagia rate 2 years after surgery were as low as 0.4%.

The overall dysphagia rates in our meta-analysis (6.6% following multiple-level ACDF and 4.0% following single-level ACDF) are consistent with the incidence reported elsewhere in the literature, which ranges from 1.7% to 70% (13-15,28,33,34,36,42-49) The wide diversity in reported rates is likely explained by differences in study design, dysphagia reporting systems and the inherent subjectivity of self-reported outcomes (40,50,51).

The majority of studies including in our meta-analysis were retrospective cohort studies, which inherently suffer from weaknesses related to data-collection and potential confounding exposures (52). For example, the use of treatments such as steroids may reduce postoperative inflammation and therefore limit dysphagia, however was not commonly reported and is a potential confounding factor. The ACDF surgical technique is another potentially confounding factor, in particularly the use of cervical plates compared to cages alone, and where plates are used the design and thickness of the plates. These variables have been shown to be independently significant determinants of dysphagia (53,54), however were unable to be incorporated into this meta-analysis due to inconsistent reporting and variation of surgical methods within some studies, particularly due to changes over time and between surgeons. Also, although there was no funnel plot asymmetry suggestive of publication bias according to the Egger’s test, the relatively small number of included studies may reduce the power of this measure (55). Given the retrospective design of 7 of the 10 included studies, a risk of publication bias does exist. The reliance on subjective, self-reported measurement of dysphagia (including using the Bazaz grading system) is another limitation that raises the possibility of discrepancies within and between populations. Finally, this meta-analysis solely investigated the dysphagia rates for ACDF. Further research should be carried out to determine dysphagia rates across all forms of anterior cervical surgery for consideration of comparative effectiveness.

Dysphagia is a common and disabling complication of ACDF, with a wide range of reported incidence in the literature ranging from 1.7% to 70% (13-15,28,33,34,36,42-49). This systematic review and meta-analysis demonstrates a statistically significant increase in complicating dysphagia following multiple-level ACDF compared to single-level ACDF at a period of 12–24 months. To improve the quality of data future studies should employ objective measures of dysphagia such as videofluoroscopic swallow evaluation and incorporate larger sample sizes with longer follow-up (56).