Cervical disc herniation is common and can affect patients of different ages (1). It can present as a radiculopathy or myelopathy, depending on the pattern of herniation. Cervical radiculopathy commonly presents with pain, paresthesia, and motor weakness (2). Cervical myelopathy can typically present with gait disturbance, motor weakness, loss of hand dexterity, bowel or bladder dysfunction, and paresthesia (3). Traditional surgical management includes anterior cervical discectomy and fusion (ACDF) and posterior cervical foraminotomy (PCF). These approaches have been exhaustively studied and validated (4-7). ACDF has long been considered the gold standard of cervical disc replacement techniques, but does pose some disadvantages, mainly the need for fusion and the risk of developed adjacent disc disease requiring future additional surgical intervention (8). With advances in endoscopic techniques and technologies, opportunities for development of minimally invasive and less disruptive surgical approaches presented itself.

A retrospective patient review was performed on 114 patients who underwent fully endoscopic cervical spine surgery procedures between 2012 and 2018. Minimum patient follow-up was 1 year.

The procedure was performed under general anesthesia; the patient was positioned prone on hip and chest bolsters with the head secured in the Mayfield head holder. Somatosensory evoked potential monitoring was used. The Joimax iLESSYS® Delta endoscopic system was used for the procedure. A 1 cm incision was made through the skin 1 cm lateral to the midline. Using intermittent fluoroscopic guidance, alternating between lateral and anterior-posterior (AP) view, a sequential dilators, then the final 10-mm beveled tubular retractor, were placed on the junction of the spinous process and the lamina. The 10-mm outer diameter working channel endoscope with 6 mm working channel was placed and a high speed Shrill® drill was used to complete the sub-spinous process laminectomy. An endoscopic micro Kerrison rongeur was used to remove the ligamentum flavum and to finish the laminectomy/laminotomy. Figure 1 demonstrates preoperative and postoperative MR images, intraoperative fluoroscopic images, and endoscopic camera views of a multi-level posterior cervical unilateral laminectomy for bilateral decompression. 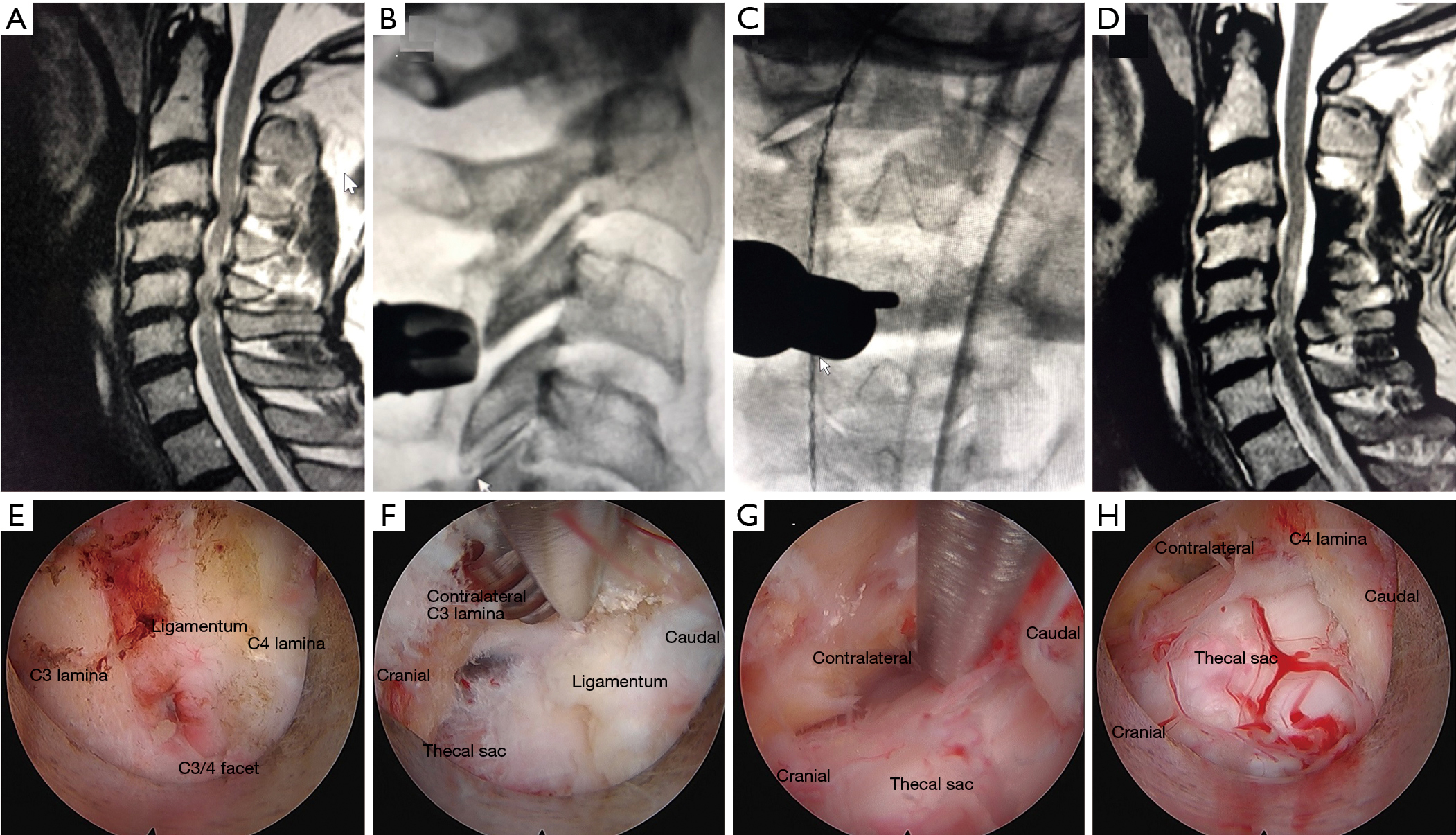 The procedure was performed under general anesthesia; patients were positioned prone on hip and chest bolsters with their heads secured in a Mayfield head holder. The Joimax iLESSYS® Pro endoscopic system with a 7.3 mm outer diameter was used for the procedure. Percutaneous entry was established entering through the skin 1 cm lateral to the midline. Using intermittent fluoroscopic guidance, alternating between lateral and AP view, a 3.5-inch 18-gauge needle was advanced, and the tip placed on junction of the inferior lamina and facet complex. A Kirschner wire (K-wire) was placed, then the needle removed, and sequential dilators and then the 7-mm beveled tubular retractor were placed on the junction of the superior part of the inferior lamina at the facet junction. The Shrill® diamond drill was used to perform the foraminotomy which was completed with the endoscopic micro Kerrison punch. The foraminotomy was completed when the exiting nerve root could be visualized, and the decompression was carried lateral to the inferior pedicle. Figure 2 demonstrates the preoperative images, intraoperative fluoroscopic images, and endoscopic camera views from an endoscopic PCF. 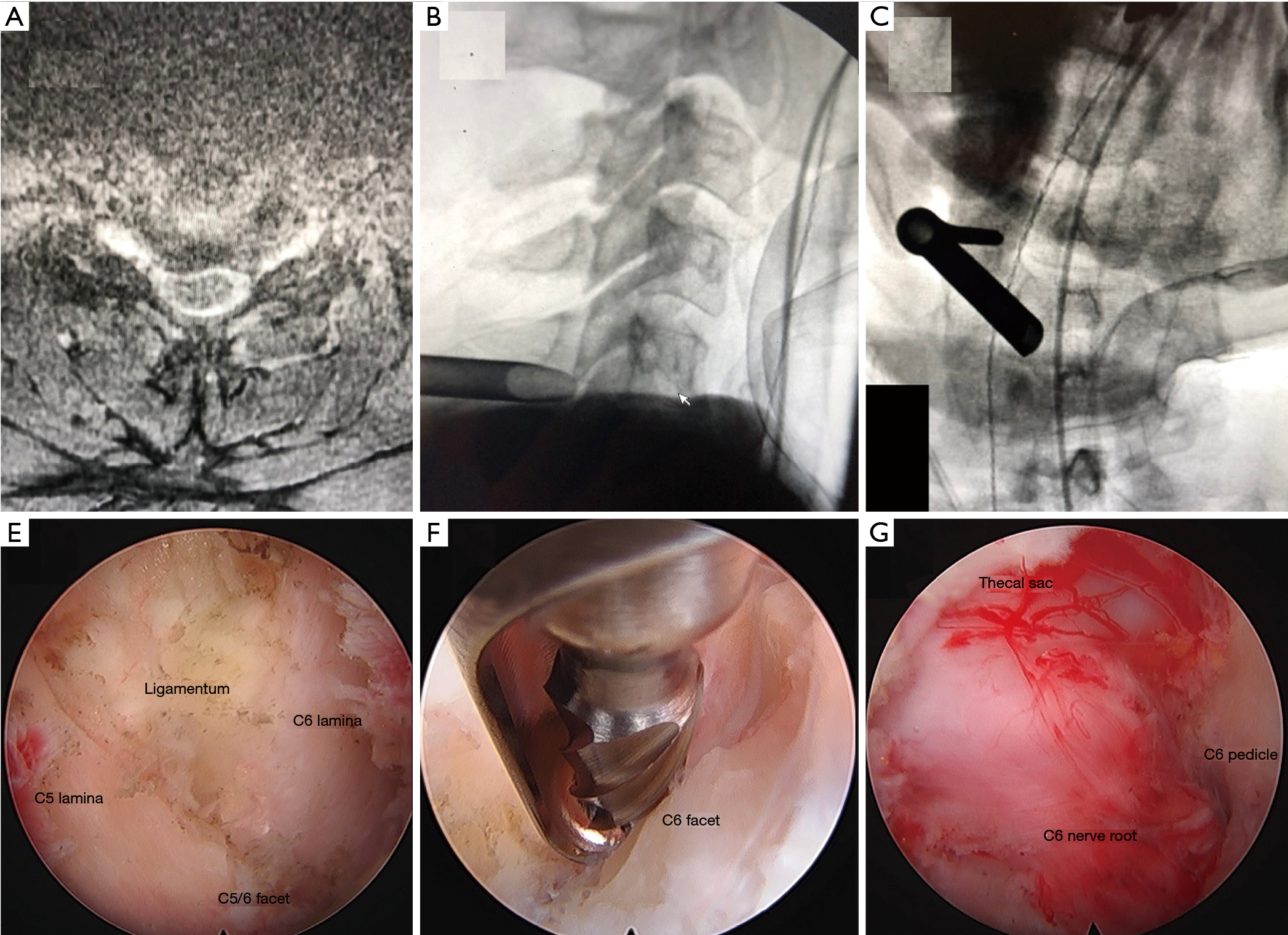 The procedure was performed under general anesthesia; patients were positioned supine. The Wolf Vertebris Cervical scope was used for the procedure. Lateral fluoroscopy was used to determine the level of the incision. A 5 mm incision was made just medial to the sternocleidomastoid muscle. Blunt dissection was done medial to the carotid and jugular and blunt dissection was used to mobilize the esophagus off the prevertebral space. The 1st blunt dilator was subsequently placed through the disc space under bi-planar fluoroscopy monitoring. After sequential dilation, the final tubular retractor was advanced through the disc space under fluoroscopic control. The working channel endoscope was advance and the Shrill® drill was used to drill down the uncinate joint to allow access for the endoscopic graspers to remove the disc herniation. Figure 3 demonstrates the preoperative images, intraoperative fluoroscopic images, and endoscopic camera views from an endoscopic anterior cervical discectomy. 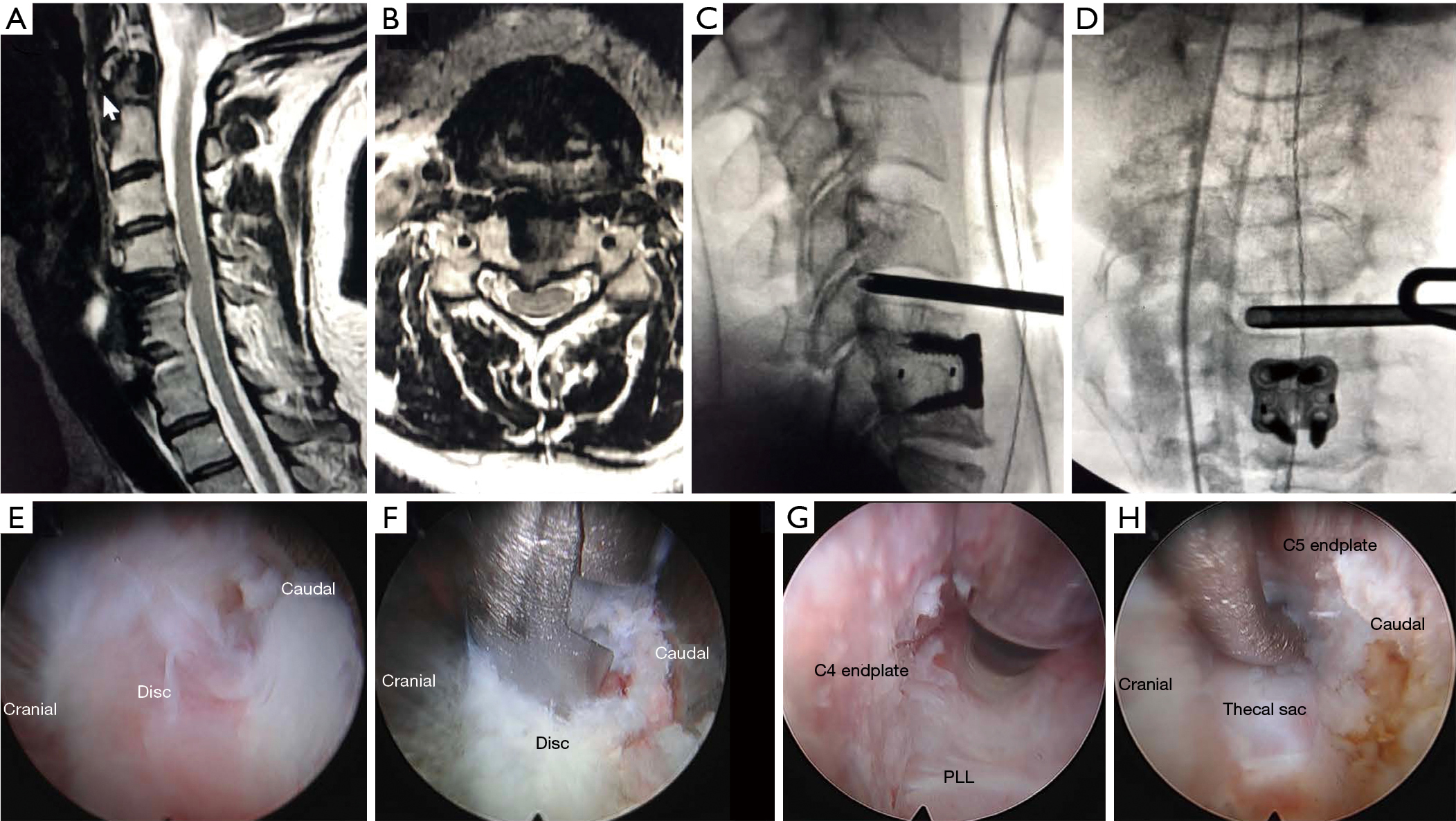 The procedure was performed under general anesthesia; patients were positioned supine. The approach was similar to the anterior cervical discectomy technique. A 1.5 cm incision was made just medial to the sternocleidomastoid muscle, blunt finger dissection was done with a standard Smith-Robinson approach. A 13-mm Matrix tubular retractor was placed first over the upper vertebral body, a guide pin was placed into the upper vertebral body with planned trajectory toward the disc herniation. Next, a 6.5-mm cannulated power drill was used to drill over the guide pin, and a Shrill® drill was used to finish drilling a channel through the superior vertebra to allow placement of the tubular retractor with its distal opening at the junction of the inferior endplate of the superior vertebral body and the posterior longitudinal ligament (PLL). The TESSYS® (6.3 mm outer diameter) was used, and instead of entering the disc with the tubular retractor, drilling was performed using intermittent fluoroscopic guidance, alternating between lateral and AP view, through the superior vertebral body to safely target the disc pathology. The channel created allowed access to the herniated ventral disc fragment without violating the anterior portion of the disc. Figure 4 demonstrates a preoperative image, intraoperative fluoroscopic image, and endoscopic camera views from an endoscopic anterior cervical transcorporeal discectomy procedure. 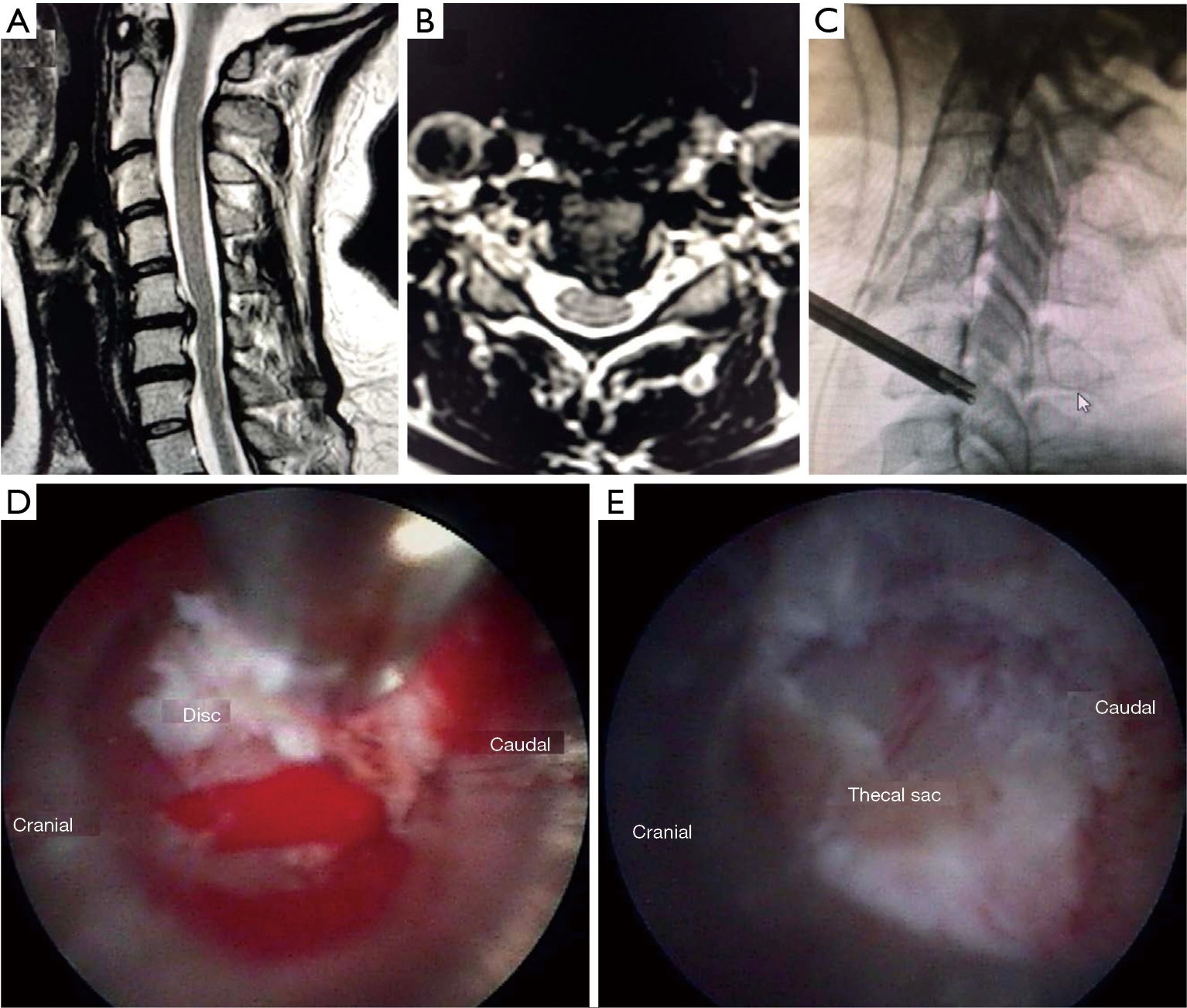 Our experiences with four distinct fully endoscopic cervical spine approaches reveal highly successful outcomes with effective reduction in symptoms, no significant complications, minimal blood loss, and short hospital stays. Our results are aligned with other author’s experiences with such techniques.

Indications for cervical endoscopic spine surgery were the same as those for traditional anterior and posterior techniques. Most patients in this study sought out care by the senior surgeon because they were interested in the most minimally invasive procedure possible.

When compared to other reports of anterior endoscopic approaches, our study cohort experienced similar rates of decrease in nVAS and aVAS scores and improvement in NDI scores. For instance, in a retrospective study of 187 patients undergoing anterior endoscopic cervical discectomy, Parihar et al. show decrease in VAS scores for arm and neck pain, 6.7 to 1.7 and 3.2 to 1.1, respectively, with only 2 patients requiring a second procedure with mean follow up of 29 months (10). This same series showed that despite lack of fusion and placement of an intervertebral spacer, cervical lordosis improved. However, reports in the literature have varied when it pertains to cervical lordosis, some suggesting that ACDF is superior in maintaining proper cervical alignment. Results have ranged from improved, unchanged, and worsened lordosis (11,12). However, these reports also show that clinical outcomes were improved despite the different cervical alignments seen on imaging (11,12). Similarly, Lee and Lee found that despite loss of disc height after fully anterior endoscopic cervical discectomy, their patients report improved nVAS and aVAS as well as NDI scores (13). Yet, with ACDF patients are at risk for injuries during dissection, may develop pseudarthroses, and may develop adjacent segment disease. All of these complications are mitigated with the use of endoscopic techniques (8,14,15). Long term data, however, remains scarce. Our experiences with anterior endoscopic discectomy techniques show similar resolution of symptoms and improvement in NDI and VAS scores as has been reported in the literature.

Similarly, successful results have been reported in posterior endoscopic techniques as well. A recent study by Wan et al., reports on their experience with posterior percutaneous full endoscopic cervical discectomy under local anesthesia (16). Twenty-five patients underwent the procedure with 24 achieving resolution of symptoms, and no major complications were reported (16). Another study looked at strength recovery after fully-endoscopic posterior cervical discectomy (FEPCD) and reported a 95% rate of strength recovery with 86% of full resolution of weakness at 1 year follow up (17). Similar rates of favorable outcomes (>85%) have been reported in the literature (18). Proponents of endoscopic posterior approaches have argued that post-operative pain is minimized due to the lack of muscle stripping, blood lose is avoided, operative time is reduced, and hospital stays are shortened. Our results are consistent with these beliefs and add to a growing body of favorable research into endoscopic approaches. However, a prospective large volume trial comparing ACDF or PCF with FEPCD has not been undertaken yet. Such a trial will help better delineate the role of endoscopic approaches as compared with traditional cervical approaches in the treatment of cervical radiculopathies and myelopathies.

Fully endoscopic cervical spine surgery is an emerging minimally invasive surgical option for the treatment of symptomatic cervical radiculopathy and myelopathy. Advantages include the high definition visualization of the surgical pathology, the reduction of tissue trauma, and taking advantage of familiar anatomical approaches. Anterior cervical endoscopic discectomy techniques offer additional advantages including preservation of movement at that level and avoiding fusion and minimal to no manipulation of nerve roots. Main disadvantages include the steep learning curve of endoscopic techniques for surgeons accustomed to traditional open approaches, the limited direct field of view, and the narrow working channel. However, multiple strategies can be used to mitigate these downsides. First, surgeons may take advantage of multiple cadaver course to accelerate their progress on the learning curve. Moreover, surgeons may start with more simple endoscopic procedures to familiarize themselves with the approach. Flexible instruments have helped overcome the limitations of a narrow channel, and device development has been rapid.

Conflicts of Interest: All authors have completed the ICMJE uniform disclosure form (available at http://dx.doi.org/10.21037/jss.2019.10.15). The series “Full-endoscopic Spine Surgery” was commissioned by the editorial office without any funding or sponsorship. The authors have no other conflicts of interest to declare.

Ethical Statement: The authors are accountable for all aspects of the work in ensuring that questions related to the accuracy or integrity of any part of the work are appropriately investigated and resolved. This study was approved by Lifespan IRB; Project Title: (600415-8) Endoscopic Spine Surgery; Principal Investigator: Albert Telfeian, MD.