Cervical stenosis has been reported in 4.9% of the adult population, 6.8% of the population 50 years of age or older and 9% of the population 70 years of age or older, involving mainly the subaxial cervical spine (1). Upper cervical stenosis is a relatively rare entity, being either congenital or acquired in origin. While the acquired causes vary from infection and trauma to rheumatoid arthritis; congenital causes include os odontoideum, congenital clefts or aplasias of the arches of atlas, hypertrophy of the dens, lateral masses or the transverse atlantal ligament, either of which may rarely present as cervical myelopathy (2-4). Congenital anomalies of the posterior arch of the atlas (PAA) although rare, are well documented, being usually asymptomatic and diagnosed incidentally (5-7). Anomalous hypertrophy of the PAA presenting as cervical myelopathy is usually associated with partial aplasia or agenesis of PAA (4). We hereby present a case of congenital malformed PAA with posterior midline fusion defect and secondary developmental canal stenosis at the level of atlas, presenting with cervical myelopathy.

A 44-year-old Indian housewife, presented to the clinic with complaints of persistent neck pain for 6 weeks, which had gradually progressed to radiate into the right half of the body, associated with tingling and numbness in the right half of body. There was no history of trauma, any joint stiffness, fever, weight loss or stigmata of tuberculosis. Examination demonstrated terminal restriction in all ranges of neck motion. Neurological assessment revealed myelopathic gait with bilateral upper limb and lower limb hyperreflexia, bilateral Babinski sign and Hoffman’s reflex present.

Radiographs showed congenital fusion of C2–C3 and C6–C7 vertebrae, well maintained coronal and sagittal vertebral alignment without radiographic instability (Figure 1). Computed tomography (CT) showed malformation of PAA with failure of posterior fusion of both laminae with a midline cartilaginous cleft at the site of the posterior tubercle (Figures 2,3). Bilateral hemiarches were abnormally incurved into the spinal canal, losing their normal smooth rounded contour; together with hypertrophy of posterior midline cartilaginous fusion defect, this caused severe spinal canal stenosis at the level of atlas. The mid-sagittal spinal canal diameter at the level of atlas was 6.36 mm. The odontoid process was well formed and the lateral masses of atlas were normal, indicating a pure posterior compressive canal stenosis. 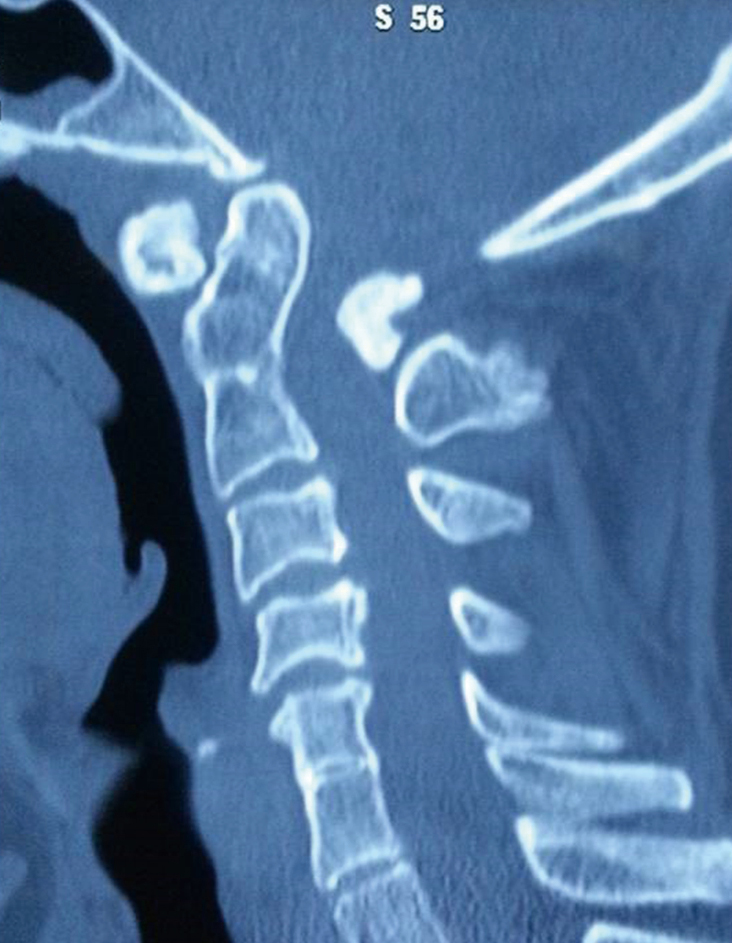 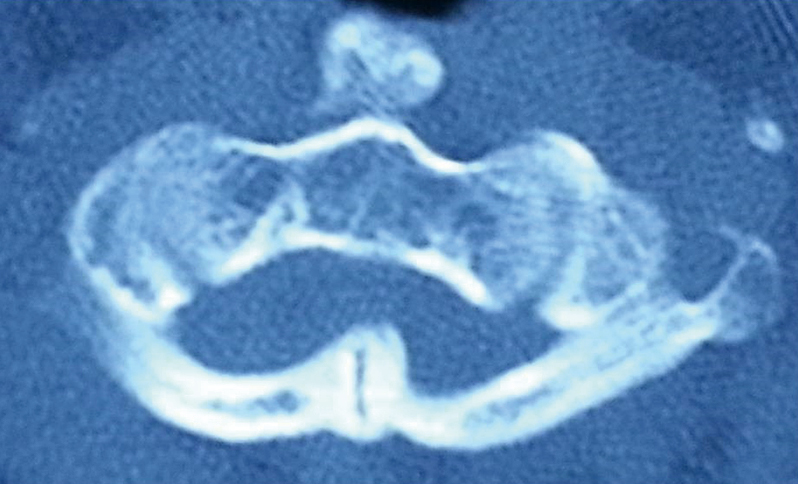 Figure 3 Axial computed tomography at level of atlas showing the malformed incurved PAA, with failure of fusion of the two hemi-arches with a midline cleft. There is osseo-cartilaginous hypertrophy of the midline fusion defect indenting sharply into the spinal canal. PAA, posterior arch of the atlas.

Magnetic resonance imaging (MRI) showed posterior cord compression due to the anomalous arch with sharp kinking of the cord at the atlas with >50% reduction in the space available for cord (SAC) (Figure 4). Axial images revealed a sharp midline hypertrophic mass of the posterior tubercle of the atlas critically indenting into and compressing the spinal cord. The midline compressive mass was hypointense on T2-weighted images without any marrow enhancement seen, with similar intensity as the intervertebral discs, suggestive of a non-osseous fibro-cartilaginous tissue. 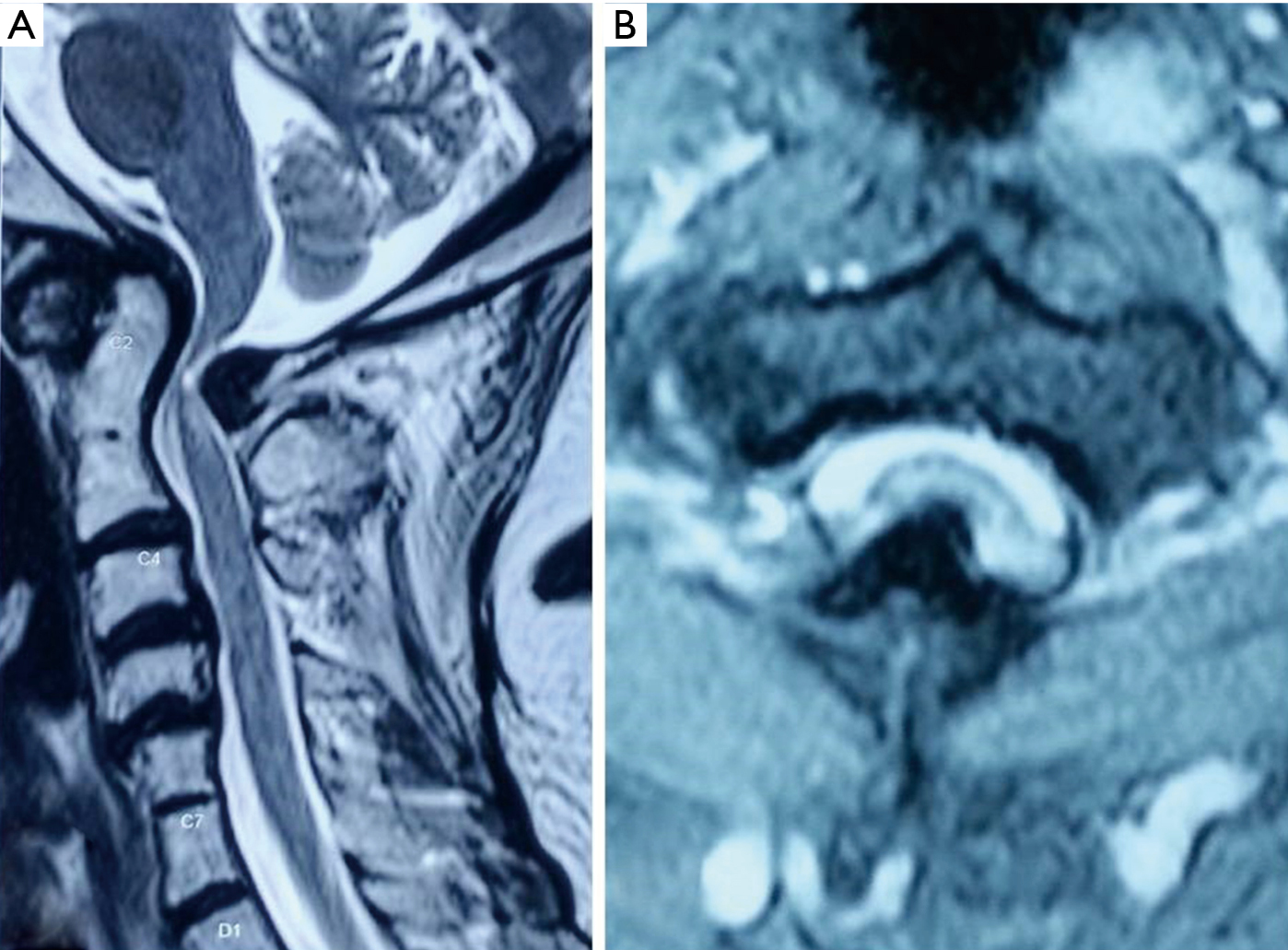 En-bloc excision of the anomalous arch with occipito-cervical fusion was performed via posterior midline approach using occipital ‘T’ plate, lateral mass screw fixation in C3 and C4 and autologous iliac crest bone grafting (Figure 5). The excised arch was noted to be abnormally curved inwards into the canal, with loss of smooth rounded contour, tightly compressing onto the cord (Figure 6). Meticulous wide dissection was performed under microscopic visualization to excise the arch en-bloc Post-excision the cord was noted to be well pulsatile without any evidence of dural injury. 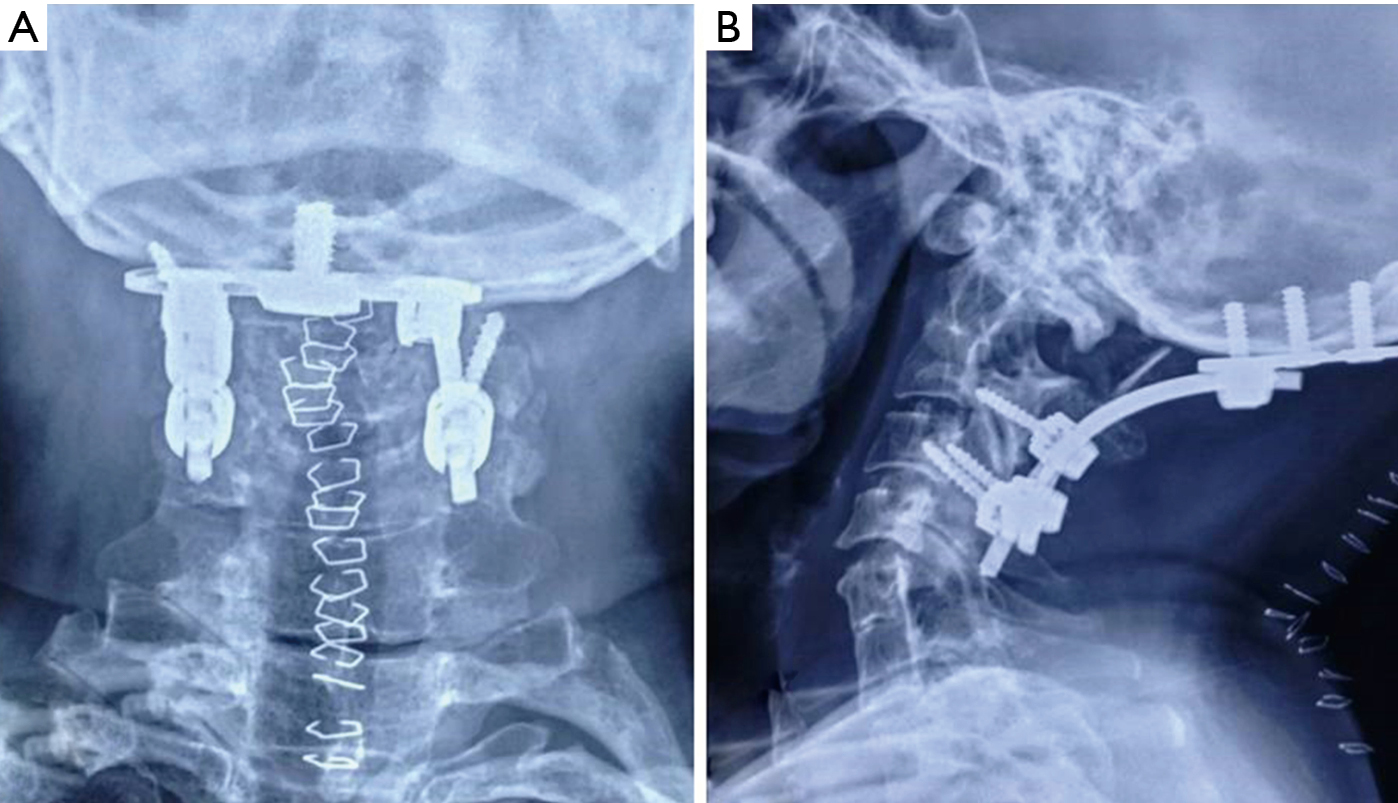 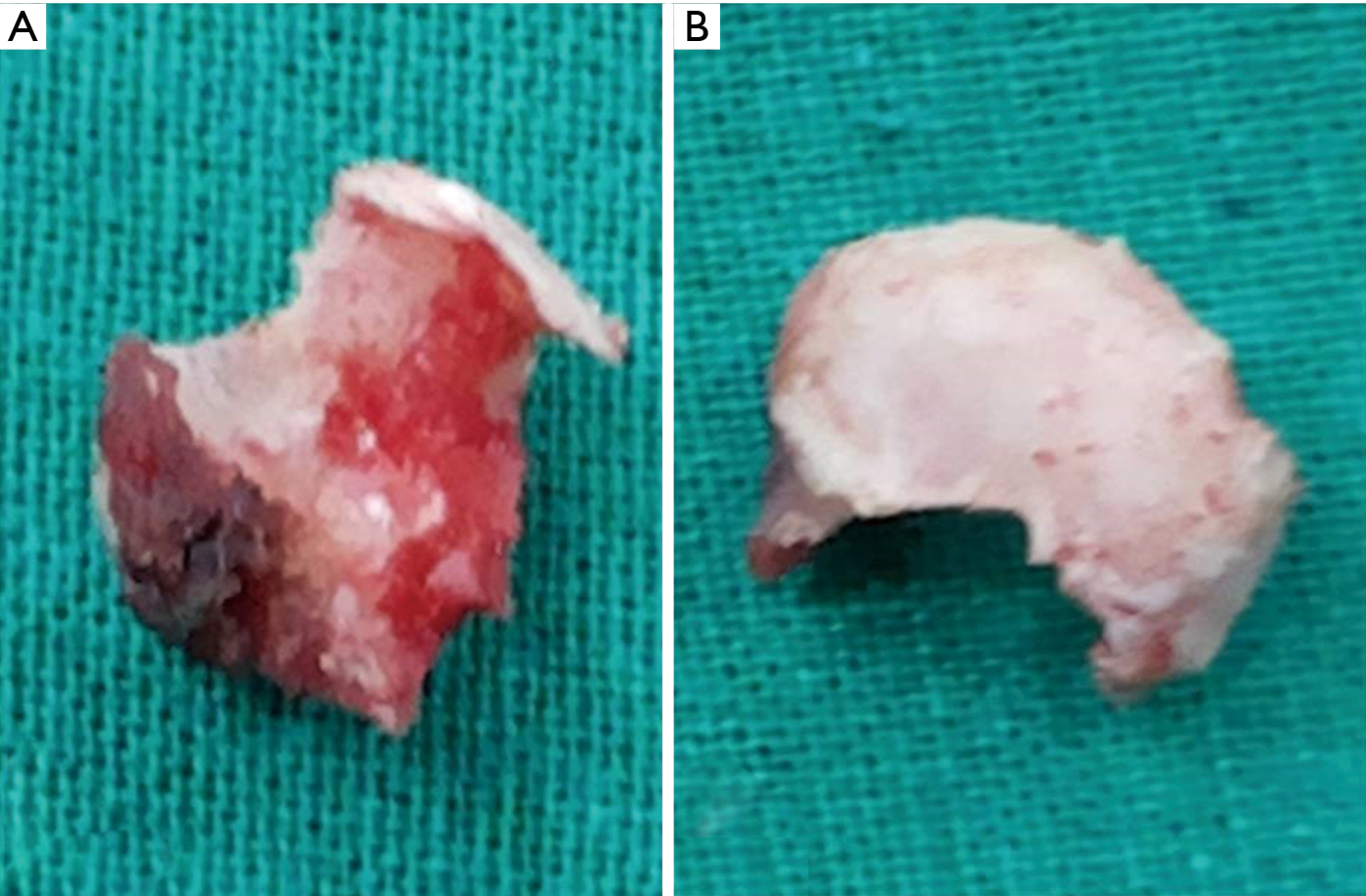 Figure 6 (A) and (B) the excised anomalous arch of atlas showing sharply angulated contour with outer smooth surface.

Post-operatively, the patient had improvement in neck pain and myelo-radicular symptoms, which gradually disappeared over next 3 months. The gait improved and neurology returned to normal at 12 months. CT scan and MRI done at 20 months show adequate canal decompression, the implants holding well in situ with a well formed posterior bilateral lateral fusion mass (Figures 7,8). At 24 months follow-up, the patient showed an excellent clinical outcome without any obvious complaints or disability. 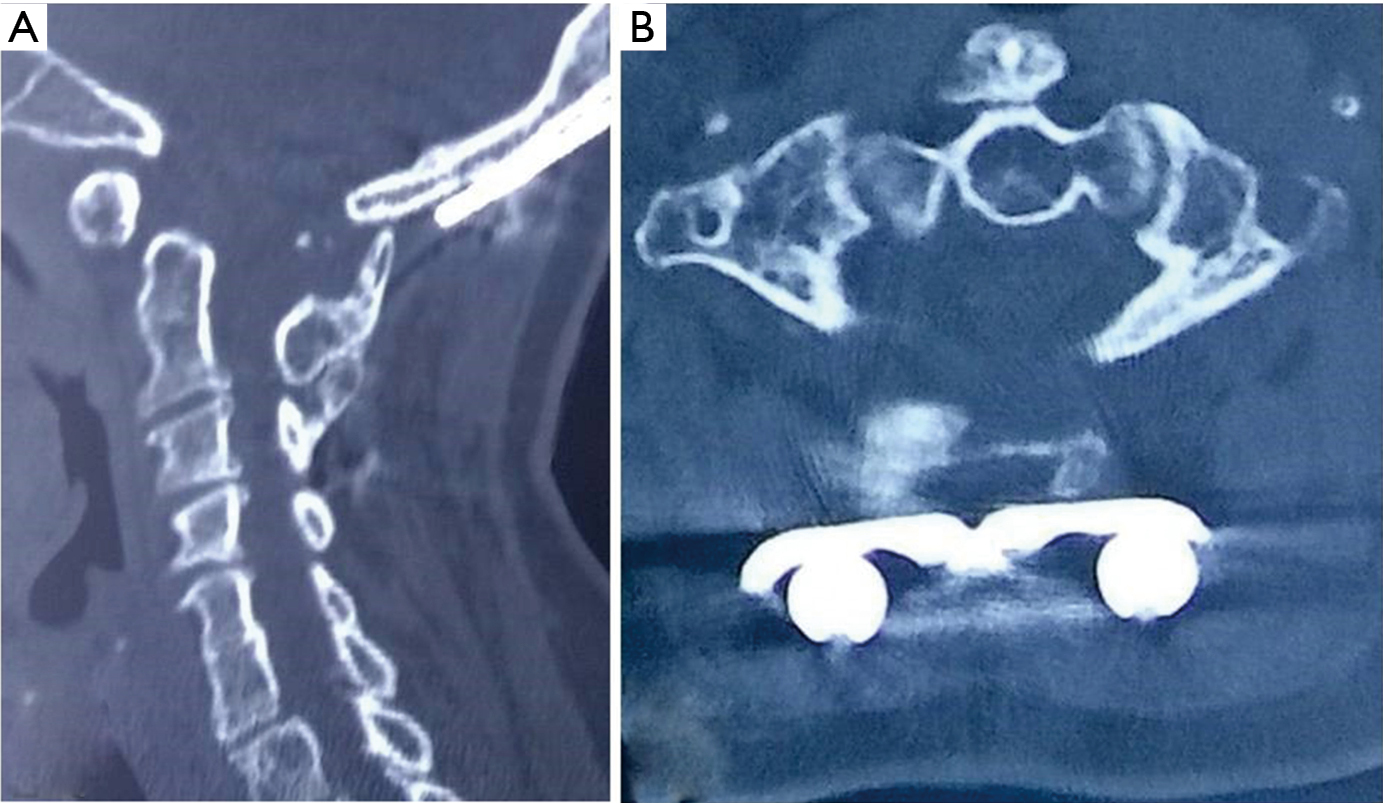 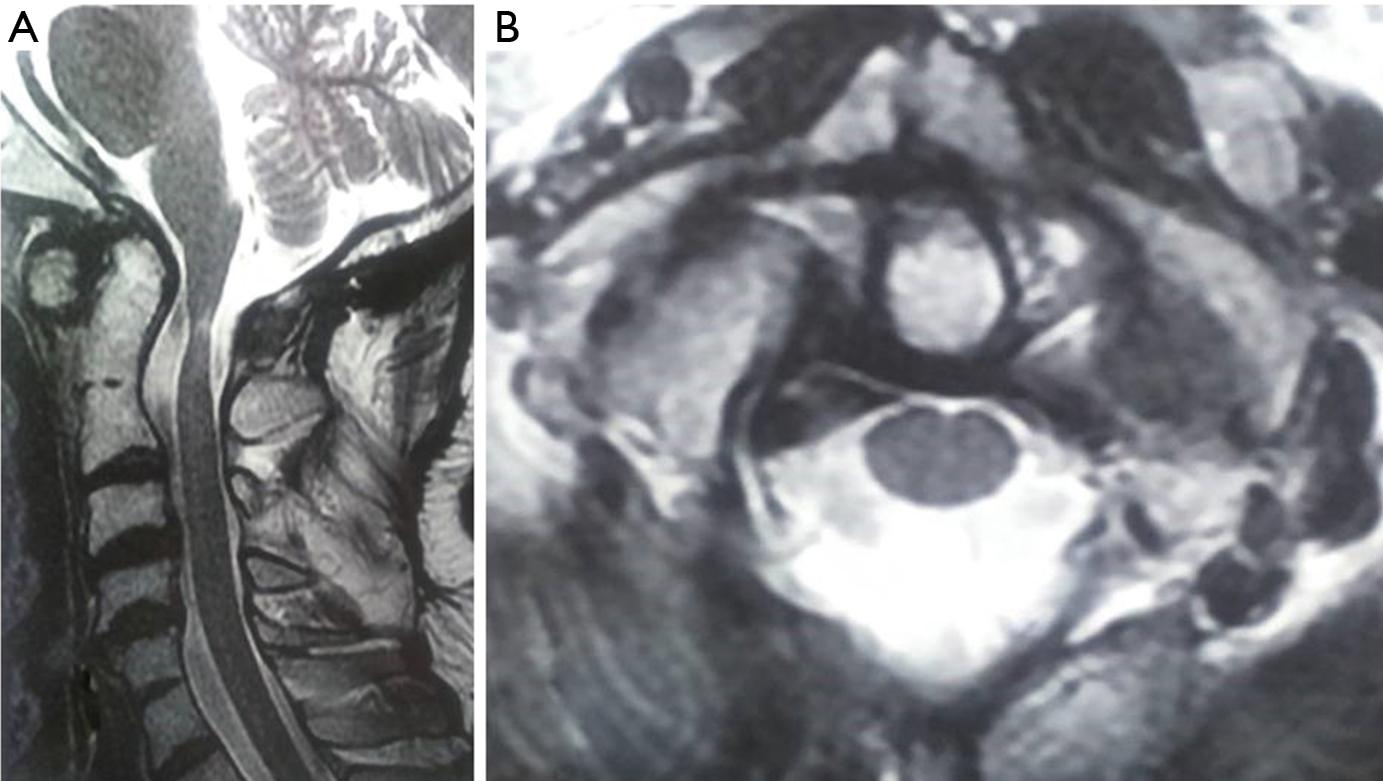 During embryogenesis, the body of the atlas vertebra develops from the primitive fourth occipital and first cervical sclerotomes (3,5). Seventh week of intrauterine life sees the emergence of three primary centres of ossification, one forming the anterior arch and two forming the lateral masses (8). The PAA ossifies perichondrally from the lateral mass ossification centres, extending dorsally towards the midline, being nearly fused at birth except for a few millimetres of cartilage in the midline posteriorly, which represents the posterior tubercle (9). Reported in 0.5–2% of the population, an additional center may be present posteriorly in the midline, forming the posterior tubercle of the atlas during the second year of life (8-10). Complete fusion of the PAA is expected to occur around 5 years of age (range 3–13 years) (3,5,6).

Congenital anomalies of PAA have a wide spectrum of presentation, ranging from failure of posterior midline fusion with a cartilaginous cleft to complete aplasia of PAA. Incidence of PAA defects has been reported between 0.69% to 4% (2,3,8,11-13). Currarino (14) classified these defects into five types, as shown in Table 1. The present case represents a Currarino type A defect of failure of posterior midline fusion of two anomalous hemi-arches, with a hypertrophied cartilaginous mass at the posterior tubercle. Type A defect is reported to be the most common type (90%) of congenital posterior arch defect (5,8,14). The anomalous posterior tubercle represents either an unfused persistent cartilaginous cleft of the bilateral hemilaminae or a hypertrophic cartilaginous remnant of the posterior tubercle ossification centre. The present case remains distinct as the midline anomalous osseo-cartilaginous mass was severely hypertrophied to cause spinal canal stenosis at the level of atlas causing cervical myelopathy due to the malformation.

Table 1 Classification of congenital anomalies of the posterior arch of the atlas according to Currarino et al. (14)
Full table

Cervical stenotic myelopathy is a common presentation in the subaxial cervical spine involvement (2,15). The mid-sagittal canal diameter at the level of atlas in the present case was 6.36 mm, whilst the normal sagittal diameter at the level of atlas is reported to be 16–25 mm (2,3,16). While significant cervical cord compression occurs if the sagittal canal diameter is <14 mm at the level of atlas; myelopathic signs and symptoms develop when the diameter falls <10 mm (17,18). Such a degree of severe stenosis, as seen in the present case, predisposes the patient to a progressive myelopathy as well as a high risk of severe spinal cord injury even after trivial trauma (12,17).

The patient presented with pain radiating to one half of the body with tingling and numbness in the same half with upper motor neuron lesion signs in all four limbs. Almost a third of the patients with PAA defects are reported to remain asymptomatic (6); in the symptomatic patients, the presentation varies from neck pain and occipitalgia (9), to neurological paraesthesia and frank myelopathy (5,6,11) and to extremely crippling reports of progressively deteriorating quadriparesis with respiratory distress (2). Although the arch defect is of congenital origin, manifestation is usually delayed into adulthood. Degenerative spondylotic changes occurring with age, at the level of the atlas, are thought to precipitate the manifestation of neural compression (17,19). Despite the lack of a specific history of injury in the past, trauma plays an important causative role in the pathogenesis of neurological complications. Microtrauma to the malformed PAA causing periosteal reaction and hypertrophy of the cartilaginous fusion defects is postulated to be responsible for progressive hypertrophy of the PAA (4).

Stenosis at the level of the atlas is reported in literature (Table 2) as isolated case reports, with the reported causes varying from clefts or aplasias of anterior or posterior arches of atlas, os odontoideum, lateral mass hypertrophy, ossification of transverse atlantal ligament and hypertrophy of the dens, either alone or in combination (2-4,12,14,17). Das et al. reported cervical myelopathy due to unilateral bony lateral mass hypertrophy, with hypoplastic posterior hemiarch of atlas, a Currarino type B defect, treated with transoral + posterior decompression and occipito-cervical fusion (3). They noted that even in the absence of complete arch formation or failure of fusion, there remains a fibrous constricting band in place of the actual arch, which needs to be divided during posterior decompression (3). The posterior midline hypertrophied mass, seen in our patient, represents such a fibro-cartilaginous hypertrophied tissue in place of the actual PAA which failed to fuse in the midline during the course of perichondral ossification. Kasliwal et al. reported a case of cervical myelopathy secondary to unilateral PAA hypertrophy, which was treated with surgical decompression (4). The present case differs primarily in the fact that the hypertrophy was at the posterior failure of fusion defect, causing a midline compression of the cord, in contrast to the unilateral arch hypertrophy in the case reported by Kasliwal et al. 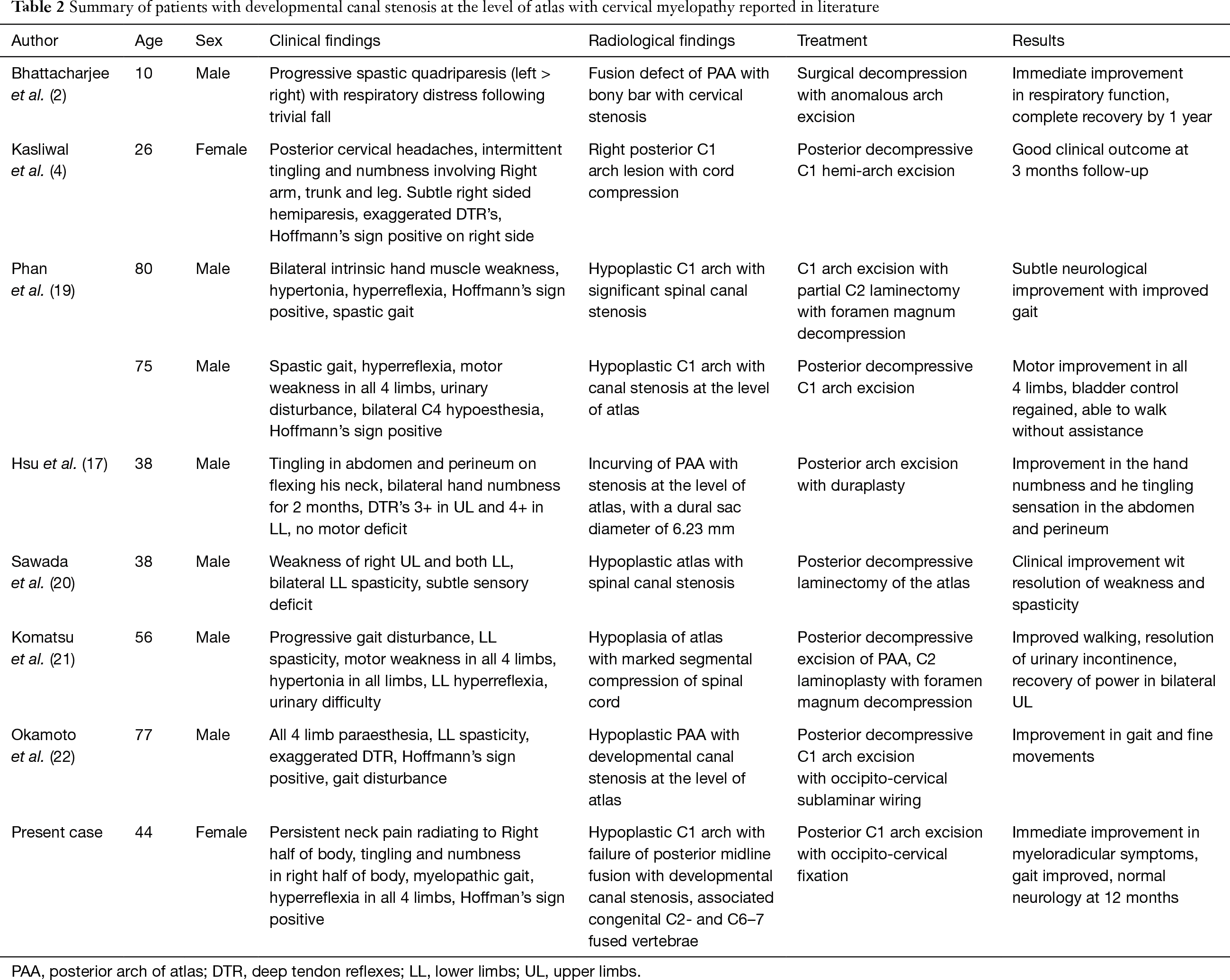 Bhattacharjee et al. reported complete neurological recovery following posterior surgical decompression in acute onset spinal stenosis secondary to PAA fusion defect with a bony bar (2). Intra-operatively, they found an abnormally incurved arch into the spinal canal, severely compressing the spinal cord (2). Gross examination of excised mass, in the present case, had similar characteristics of an abnormally inward contoured arch with narrowed antero-posterior sagittal diameter in addition to the midline cartilaginous hypertrophy of the posterior arch fusion defect. This represents developmental canal stenosis at the level of atlas due to inadequate posterior migration of the arches, causing antero-posterior narrowing of the canal, thereby reducing the SAC significantly. The severity of the developmental stenosis depends on the degree of hypoplasia of the PAA, which in turn is decided by the amount of dorsal extension of the arch arising from the two lateral ossification centres during embryogenesis (17). Thus, an accurate pre-operative CT scan evaluation of the characteristics of the anomalous arch is essential to ensure careful dissection and adequate decompression while avoiding inadvertent iatrogenic neurological or dural injury in using instrumentation in a developmentally stenotic spinal segment. Occipito-cervical fixation was done to achieve fusion as the anomalous curved PAA needed a wide laminectomy to achieve complete decompression and the dissection involved stripping of suboccipital stabilizing ligamentous attachments to C2 spinous process; both factors entail a risk of post-operative atlanto-axial instability or occipto-cervical kyphosis. C1–C2 Magerl-type transarticular screw fixation could not be used due to anomalous fused C2–C3 vertebrae; C1 arch excision precluded the use of Brooks or Gallie’s type sublaminar wire based fusion construct. Sabuncuoglu et al. extensively reviewed the literature on hypoplastic PAA and concluded that the excision of anomalous PAA is curative, and if the PAA anatomy is abnormal, the posterior fusion should involve the occiput and lower cervical segments (8).

In conclusion, posterior arch of atlas congenital defects are a complex constellation of abnormalities with abnormal arch morphology, midline cleft hypertrophy and arch fusion defect. Though infrequently symptomatic, these can present as cervical myelopathy; being aware of such an entity avoids diagnostic delays and treatment dilemmas as the stenotic segments are prone to severe deficit even with trivial trauma. Posterior laminectomy is effective for cord decompression, and fusion is indicated in cases with potential post-operative instability or in presence of other congenital defects.

Informed Consent: Informed consent was obtained from the individual participant included in the study for the purpose of publication.