It provides excellent anatomical information about the spinal cord macrostructure and its histopathological changes (2). Nevertheless, in patients affected by symptoms due to cervical spondylosis, multiple findings with spinal cord compression are usually demonstrated with MRI and different surgical options are available.

In this study, we evaluate the findings at the static and dynamic (flexion-extension) cervical MRI in a series of patients affected by “long-tract symptoms”.

In the period between March 2010 and March 2012, three-hundred-ten patients referred to our department since affected by neck/arm pain or symptoms related to cervical myelopathy. Fifty-eight patients were excluded since affected by tumors, spondylodiscitis, deformity or trauma. Two-hundred-fourteen patients complained neck pain or symptoms related to cervical radiculopathy and were excluded from the study. Thirty-eight patients complained “long-tract symptoms” related to cervical myelopathy. This series of patients was enrolled in the study. All patients underwent clinical and neurological exam. In all the cases, a static and dynamic cervical MRI was executed using a 3.0-T superconducting MR unit (Intera, Philips, Eindhoven, Netherlands). The dynamic exam was performed with as much neck flexion and extension the patient could achieve alone. Custom-built positioning sponges were positioned under the head for flexion and under the shoulder for extension. T1- and T2-weighted sequences were obtained in sagittal and axial plane for the static exam, only T2-weighted images were executed for the dynamic exam. On T2-weigthed MRI each level was assessed independently by two neuroradiologists (example in Figure 1) and Muhle scale was applied (3). 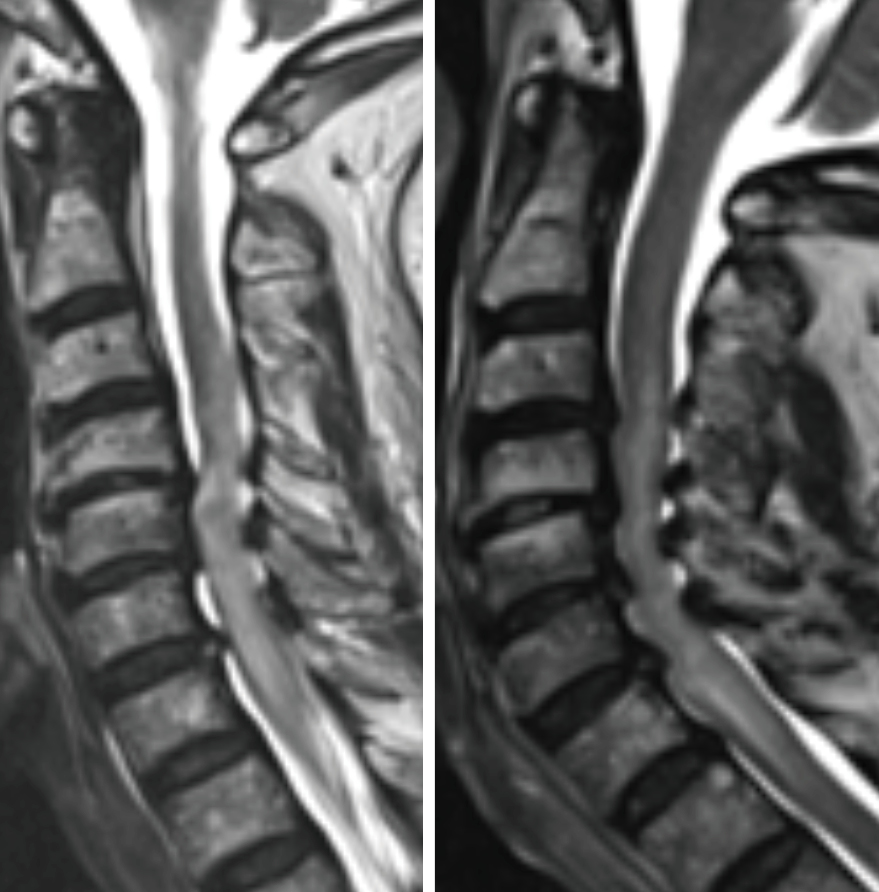 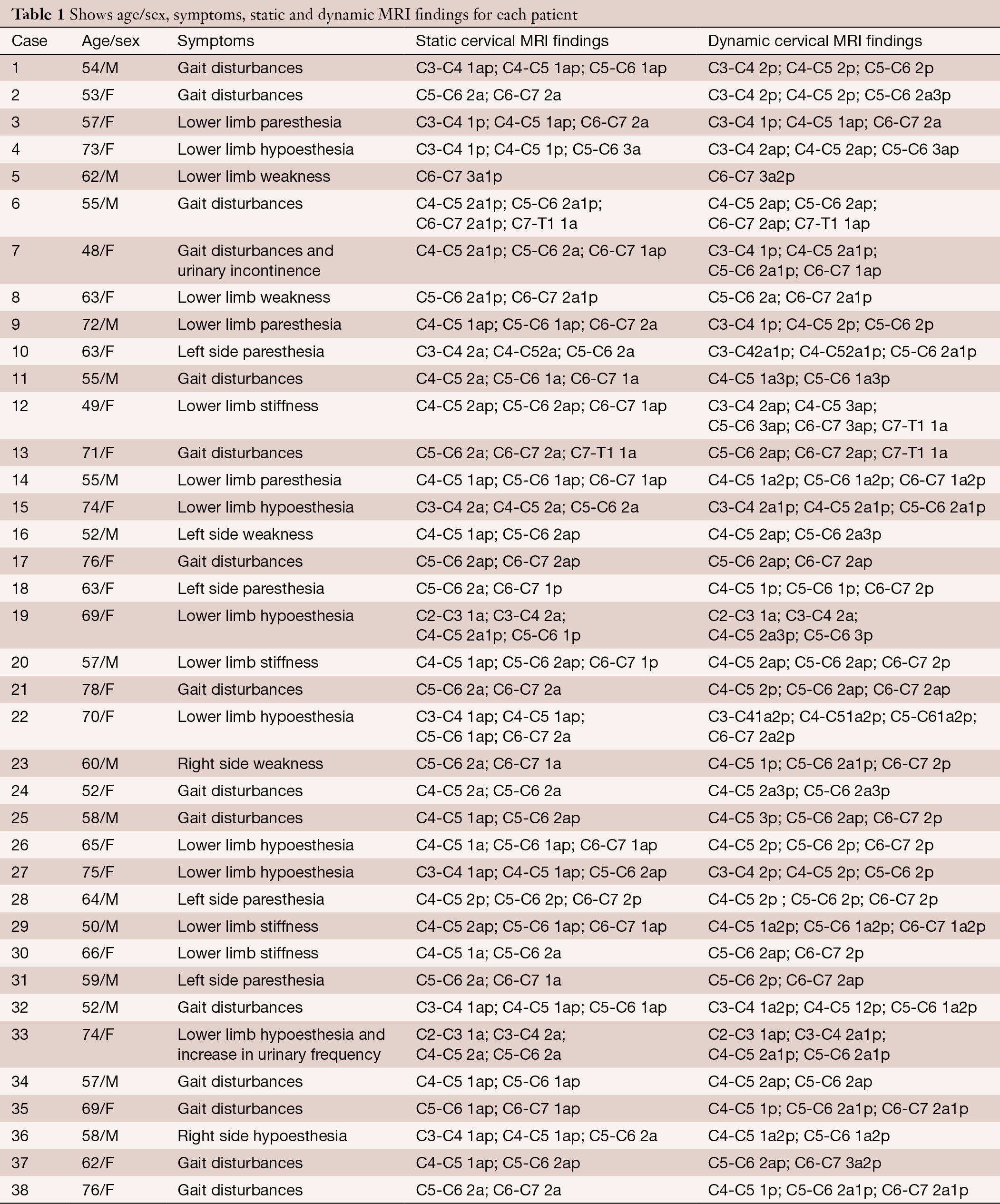 In this study, we report our experience in using the dynamic cervical MRI in addition to the static exam. The dynamic exam was executed in a series of patients affected by long tract symptoms in which there was not a clear surgical plan. The findings at the static and dynamic exam with the relative grade of spinal cord compression are reported.

Muhle proposed a new classification system analysing eighty-one patients with different stages (I–IV) of degenerative disease of the cervical spine examined with MRI. He classified each segment as: 0= normal, 1= partial obliteration of the anterior or posterior subarachnoid space, 2= complete obliteration of subarachnoid space and 3= cervical cord compression or displacement.

The antero-posterior diameter of the spinal canal has been reported to be increased in flexion and decreased in extension (4).

Yu et al. (7) studied 71 patients affected by cervical myelopathy with and without hyperintensity on T2W MRI and the Cobb angle on cervical flexion-extension radiographs. He concluded that increased segmental hyperextension curvature (≥10°) and range of movement (ROM) are risk factors for high intensity lesions on T2W MRI in these patients.

An analysis of extension MRI found an increased number of compression levels in 72% of patients as compared to the findings of static MRI. The interpretation of asymptomatic spinal compressions based exclusively on extension MRI has been warned to be made with caution (8).

Our study demonstrates that dynamic MRI found more spinal cord compression than static MRI (186 vs. 156). The static exam showed a prevalence of anterior compressions (61.54%), while the dynamic one demonstrated prevalence of posterior compressions (56.5%). The posterior compressions in static MRI are in 70% of grade 1, while in dynamic MRI they are in 57.14% of grade 2. Basing on the additional dynamic exams we obtained more radiological information and this helped us in defining the surgical plan. After the acquisition of static T1- and T2-weighted images, only T2-weighted images were performed for the dynamic exam. The positioning of the neck was easily executed using custom-built sponges and the dynamic exam required an acquisition time of a few minutes more (15–20 minutes in total for static and dynamic MRI) with a slightly higher cost. Finally, we consider the dynamic cervical MRI an additional exam with a slightly higher acquisition time and cost, however it adds useful radiological information to the surgical plan. This exam can be particularly useful for the treatment of patients affected by cervical myelopathy, since their neurological exam does not usually give information about the level to operate and many surgical options are available. The high rate of radiological findings in extension images suggests its careful evaluation and integration with flexion images.

Dynamic cervical MRI shows a major number of findings compared to static MRI with a prevalence of posterior ones, which are in 57.14% with complete obliteration of subarachnoid space. Its use in conjunction with static MRI may be useful in patients affected by cervical myelopathy in order to plan the operation, but a careful evaluation of the posterior findings should be done since they are probably overexpressed by dynamic MRI.

Ethical Statement: The study was approved by our Institution and written informed consent was obtained from all patients.