Traditional open and minimally invasive posterior approaches to surgically treating lateral recess stenosis entail performing a modest laminotomy or laminectomy with removal of a portion of the medal facet joint in order to decompress the traversing, and sometime exiting nerve root. The risk with this approach is in further destabilizing the already degenerative facet joint complex. Transforaminal endoscopic decompression of lateral recess stenosis attempts to avoid destabilizing the facet complex, but the procedure can be a challenge even for the most experienced of endoscopic spine surgeons. Accessing the medial lateral recess pathology, hypertrophied ligamentum flavum and hypertrophied facet bone, from an ipsilateral transforaminal approach will often require tedious and time-consuming endoscopic drilling to adequately remove the compressive pathology. A posterior endoscopic approach is a more minimally invasive version of the microscopic or microendoscopic approach which involves a direct posterior decompression of the medial portion of the top of the IAP-SAP complex down to the bottom of the IAP-SAP complex until the traversing nerve root is decompressed. Here the authors describe a more direct percutaneous targeting of the lateral recess pathology from a contralateral interspinous, sublaminar approach that directly targets that compressive lateral recess pathology and spares most of the facet joint complex. 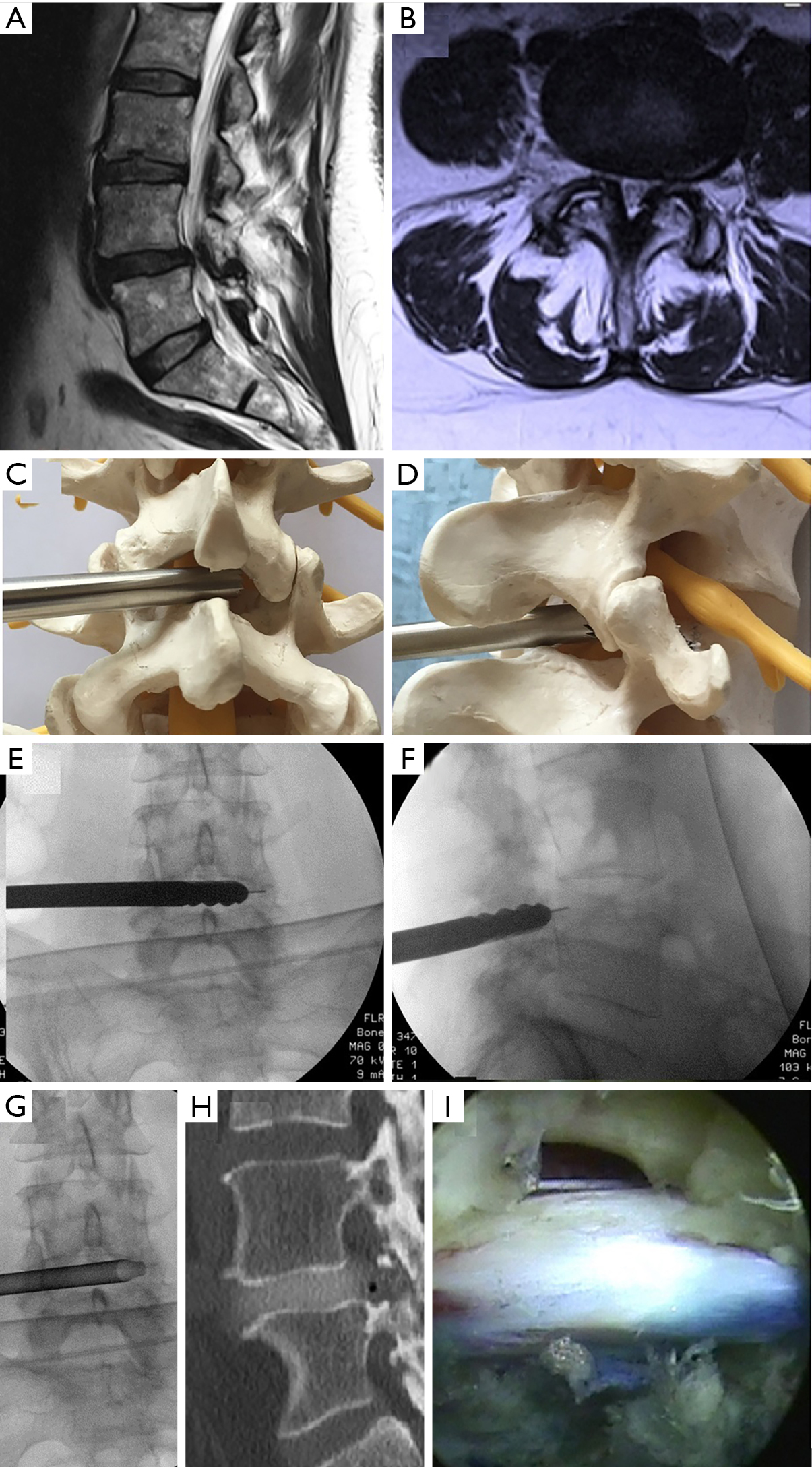 In this small clinical series, patients treated were symptomatic from lumbar lateral recess stenosis as evidenced by their MR studies (Figure 1A,B and Figure 2A,B), clinical presentation and physical exam. Each patient had previously undergone physical therapy and interventional pain management prior to considering surgery. Contralateral sublaminar endoscopic decompressions were performed in 4 male and 2 female patients. Table 1 lists the patient demographics and outcomes. Patient ages were between 59 and 82 with an average age of 69. Four cases were performed at L4–5 and 2 cases were performed at L3–4. Bilateral procedures were performed in one patient at L4–5 and in one patient at L3–4.

For the contralateral interspinous, sublaminar endoscopic procedure, the patients were positioned in the prone position on a Kambin frame with flexed hips and knees. The procedure was done under general anesthesia. The Joimax® TESSYS endoscopic system with reamer and drill technique was used for the procedure. Percutaneous entry was established entering through the skin 6 cm lateral to the midline. Using intermittent fluoroscopic guidance, alternating between lateral and anterior-posterior (AP) view, a 25 cm 18 gauge needle was advanced and placed at the inferior articulating process (IAP) of L3 for L3–4 cases and L4 for L4–5 cases. After feeling the needle contact the bone, fluoroscopy confirmed the needle position in AP and lateral views. The entry angle for the needle was at approximately 50 degrees from horizontal for each case. A 6 mm skin incision was made over the needle, and the needle was then replaced by a K-wire. Sequential dilators of 4 and 8 mm were inserted down to the IAP. Sequential dilators were removed and with the guidance of the K-wire, the Jamshidi needle was inserted down to the IAP under fluoroscopic guidance. With the guidance of the K-wire and under fluoroscopic control, the Jamshidi needle was pushed though the bone in the direction of Kambin’s triangle (between the exiting and traversing nerve roots) until a loss of resistance was encountered. The Jamshidi needle was then removed and sequential reaming through the bone was performed with disposable 5, 6.5, and 7.5 mm reamers (Figure 1C,D). The small hole in the lateral recess bone was then increased sequentially with use of a manual side shaving drill system (Figure 1E,D,F and Figure 2C). The blunt tips of the drills were ideally suited for safely drilling in the foramen. After drilling and prior to endoscopic decompression, a discogram was performed by injecting the disc with a mixture of contrast medium (Solutrast® 3 mL) and Toluidinblau® blue dye (0.1 mL) (Figure 2F). After the discogram, the final 7.2 mm tubular retractor was then inserted (Figure 1G and Figure 2F). At this point the Joimax® rigid endoscope with a 3.8 mm working channel was inserted through the tubular retractor. Under endoscopic view, straight and bendable graspers were used to remove bone fragments and ligamentum flavum (Figure 3A). Hemostasis was controlled with the radiofrequency probe. Additional decompression could be achieved using the high speed endoscopic drill (“Shrill” from Joimax®) (Figure 2E). In each case at the end of the decompression the traversing and nerve root could be seen, well decompressed (Figure 1I and Figure 2G). At this point, the working channel and scope were removed, pressure was held on the incision for 5 minutes, and the wound was closed with a single interrupted suture.

The six patients who underwent contralateral facet-sparing sublaminar endoscopic foraminotomy for the treatment of lumbar lateral recess stenosis had an average reduction of their radicular pain as measured from 1 to 10 on the visual analogue pain scale (VAS) of 73% at the one year postoperative visit (Table 1). All patients were followed for 1 year with no recurrence of symptoms. There were 2 complications in the series. The 59-year-old male patient who underwent a left lumbar 4–5 foraminotomy had 10 days of foot dorsiflexion weakness (grade 2/5) that resolved on its own in 10 days. The 82-year-old female who had a right lumbar 4–5 foraminotomy had 1 week of paresthesia in the left right L4 distribution that resolved with physical therapy. This patient had incomplete removal of the inferior articulating process of L3 on a post-operative CT scan (Figure 3B) that was likely the result of an entry point of 8 cm off the midline instead of the usual 6 cm off the midline. Two other patients had routine lumbar CT’s postoperatively that demonstrated the bony removal in the lateral recess (Figure 1H and Figure 2H). Prior to surgery, each patient had a flexion-extension lumbar X-ray to rule out instability, and at the one year follow up, there were no cases that indicated progressive back pain to make progression to spondylolisthesis suspect.

The technique presented here is, essentially, an endoscopic undercutting of the medial facet complex from a contralateral approach utilizing endoscopic visualization and specialized reamers, drills, and graspers. The small technique, however, is used to address a larger problem: degenerative spine disease in a growing elderly population. Lumbar radiculopathy that results from degenerative disease is typically the result of bulging of the disc and overgrowth of the facet complex and ligamentum flavum that results in lateral recess and foraminal narrowing and subsequent nerve root compression. In the Framingham population study, 19–47% of Americans 60 years and older were found to have radiographic evidence of spinal stenosis depending which radiographic criteria were used (1). A multitude of surgical procedures for decompression of lateral recess stenosis have been described ranging from standard open laminectomies to minimally invasive decompressive techniques (2-8). The goal of these procedures for treating patients experiencing lumbar radicular symptoms secondary to degenerative foraminal narrowing is to expand the stenotic neural foramen relieving the compressed traversing nerve root. The traditional laminectomy procedure in combination with partial removal of the facet joint may lead to instability and subsequent spondylolisthesis and scoliosis (9). Destabilization of the spinal segment is in proportion to the amount of facet resected (10) and, moreover, removal of the midline structures contributes to that segmental instability (10,11).

The evolution of surgical procedures to decompress the lateral recess has been from big to small with the development of microscopic, microendoscopic, and endoscopic approaches through smaller and smaller incisions with the goal of preserving midline structures and facet function to avoid instability and subsequent need for arthrodesis surgery. Microscopic approaches represented a first step in the evolution of these minimally invasive approaches. With microscopic visualization incisions could be made smaller, muscle detachment reduced, and isolated ipsilateral resection of facet joint material facilitated (12,13). The size of the surgical approach corridor was reduced even further with the introduction of microendoscopic approaches through a 16 mm tubular retractor (14). Ruetten et al. presented their results for posterior fully endoscopic treatment of lateral recess stenosis and found the success to be comparable to a microsurgical control group (15).

The approach presented here is a technical nuance to the endoscopic lateral recess decompression procedure. The contralateral sublaminar approach is intended to target the medial aspects of the inferior borders of the IAP and SAP that are responsible for the compression of the traversing nerve root. As displayed in Figures 1I and 2G sufficient bony and ligamentum flavum removal is possible to result in a visually decompressed traversing nerve root. There are, however, several short comings to the technique described. First, a contralateral sublaminar approach does make injuring the central canal structures possible if the surgeon is not experienced with needle targeting under AP and lateral fluoroscopy. Second, the initial drilling is done under fluoroscopic, not visual control. This also creates a risk to injury the neural elements. And third, as depicted in Figure 3, the critical angle of approach to the foraminal pathology makes a too steep (injury the nerve) or too shallow (destabilize the facet or leave medial compressive bone) approach angle result in either an insufficient decompression or, and worse, a nerve injury. The approach shared here represents a cumulative experience of over 9,600 endoscopic spine procedures by the authors. It is intended to be applied only in cases where other more traditional minimally invasive procedures are less feasible and only performed by surgeons experienced with endoscopic spine surgical techniques.

Informed Consent: Written informed consent was obtained from the patients for publication of this manuscript and any accompanying images.