Cost analysis of adolescent idiopathic scoliosis surgery: early discharge decreases hospital costs much less than intraoperative variables under the control of the surgeon

Adolescent Idiopathic Scoliosis (AIS) is a coronal curvature of the spine measuring more than 10° via the Cobb method, occurring in patients over the age of 10, with no other associated conditions (1-5). The worldwide prevalence of AIS is 0.47–5.2% in the current literature (6). The natural history of idiopathic scoliosis has been documented in select populations by other authors (7-9), and surgery is recommended for curves >50 degrees to stop further curve progression (8,10). Costs associated with the surgical treatment of AIS are increasing significantly, with charges in 2012 estimated to be in excess of $1.1 billion (11,12). A standardized CarePath and accelerated discharge program was recently created at our institution for patients undergoing surgery for AIS. The CarePath includes the use of multimodal anesthesia pre, intra, and post-operatively, along with blood conservation techniques and aggressive physical therapy protocols. The purpose of our study was to review hospital costs, length of stay (LOS), and complication rates before and after this program was instituted. We hypothesized that a significant decrease in LOS and hospital costs would occur.

Permission for our study was granted by our Institutional Review Board and by our Finance Department (IRB #16-388). A retrospective cost analysis and chart review was performed on all patients treated surgically over an 18-month period, from January 2014 through the end of June 2015. All patients had a diagnosis of idiopathic scoliosis, or an International Classification of Diseases 9th edition (ICD-9) code 737.30. Specific cost data was not permissible for publication by our institution to protect proprietary information, so a percentage average of the total cost per episode of care for each cost category was reported. Costs were those incurred from the immediate preoperative state until the post-surgical discharge. No downstream costs after the patient was discharged or those associated with revision surgery or complications were factored. The total average costs associated with surgery were divided into 11 categories and determined for each surgeon. From these 11 categories, the 5 least contributory were combined into a ‘Miscellaneous’ group, including Cardiology, Respiratory, Pathology, Imaging, and Diagnostics. The remaining six categories included Surgical Services, Professional Fees, Nursing, Pharmacy, Laboratory, and Rehabilitation. Room and board hospital costs were included in the Nursing category.

Patients were treated by one of three fellowship-trained pediatric orthopaedic surgeons. ICD-9 Clinical Modification (CM) codes for hospital procedures included 81.04, 81.05, 81.06, 81.07, and 81.08 (anterior or posterior technique). Itemized costs and LOS were analyzed prior to [Period 1 (P1) = January 1st 2014 to December 31st 2014] and after [Period 2 (P2) = January 1st 2015 until June 30th 2015] institution of the accelerated discharge protocol. The accelerated discharge protocol was multifaceted and included a standardized pharmacologic approach for pain management, as well as standardized postoperative medical and therapy approaches. The modalities used have been discussed extensively in the literature, and include the use of gabapentin, intravenous (IV) acetaminophen, IV ketorolac, local liposomal bupivacaine injection, and two hydromorphone epidural catheters for 48 h post-operatively (13-19). Patients spend less than 24 hours in the pediatric intensive care unit (PICU) for monitoring, and therapy begins a few hours after surgery is completed.

Patient data and variables including age, sex, scoliosis curve type according to Lenke classification (20), levels fused, number of pedicle screws used per surgery and per level fused, and LOS were analyzed. All direct costs associated with each episode of care before (P1) and after (P2) the accelerated discharge protocol was instituted were analyzed. A two-tailed t-test was used to determine statistical significance for LOS data. Complications were classified into three different categories; wound-related, medical-related, or implant-related. Major complications referred to any complication that required a significant change in the treatment plan or required additional surgery, while minor complications did not.

Average cost data for each of the 11 categories was compared before and after the accelerated discharge was instituted (Figure 1). A weighted average was calculated from each time period as well as a relative percentage change. An average costs savings per case and per category was calculated, demonstrating the importance of each categories change. Three categories were noted to contribute to approximately 90% of total costs, including surgical services, professional fees, and nursing (Table 3). Average surgical services and nursing costs both decreased during the study period (14.5% & 18.8% respectively), while all other average costs per case increased. The moderate reduction in average Nursing costs was outweighed by an 8.8% increase in average Professional Fee costs alone. Overall, there was a 9% reduction in total average costs per case after the institution of the accelerated discharge program. This led to an average cost decrease of about $2,000 per case (Table 3). 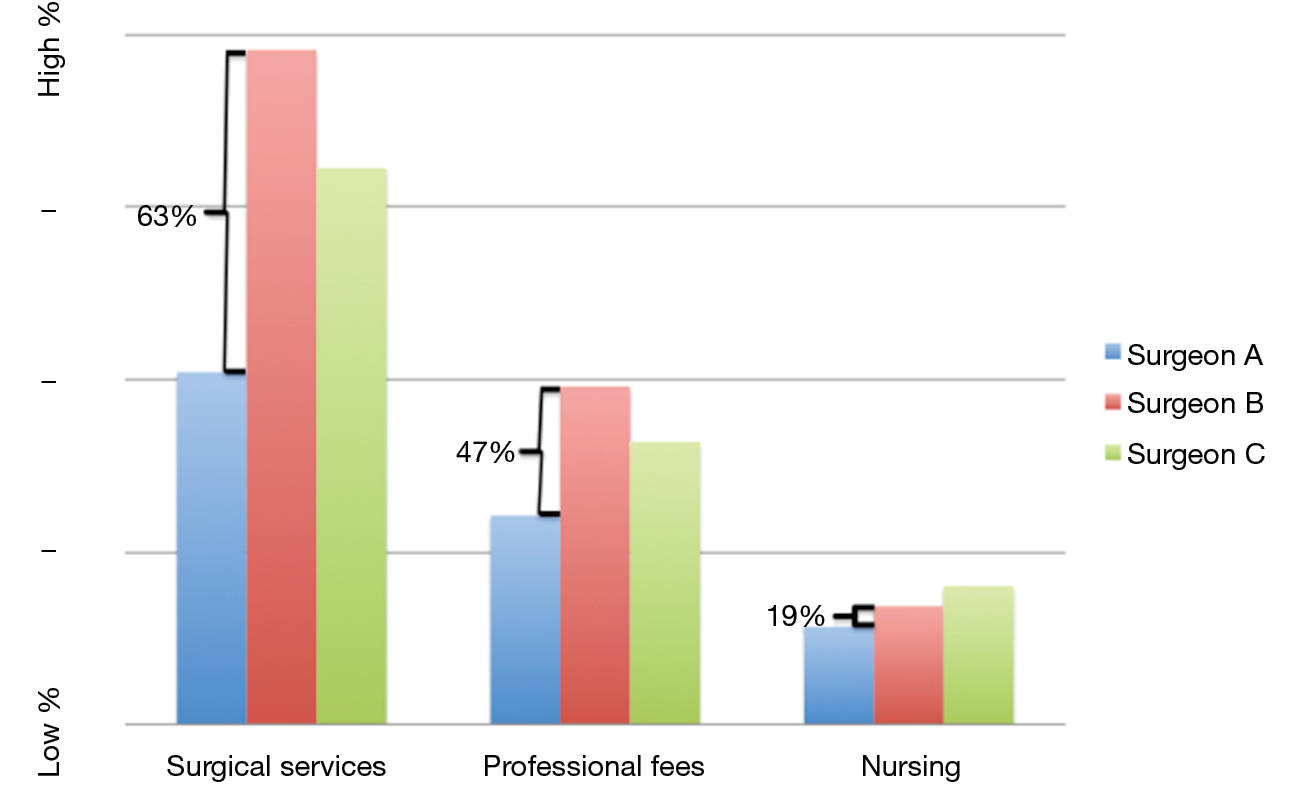 Martin et al. (12) performed a database study utilizing the national inpatient sample (NIS) between 2001 and 2011. They also retrospectively reviewed 40 cases from their own institution over a similar period of time, hoping to identify the drivers of surgery charges. The authors identified that the most significant driver of total charges at their institution was pedicle screw instrumentation. Implant fees accounted for 28% of total hospital charges in 2003, and increased to 53% of charges in 2012. This corresponded with the senior author’s increase in pedicle screw density during that time period (2.3 screws on average per case in 2003 to 16.3 in 2012) (12).

Daffner et al. (21). studied the geographic and demographic variability of costs associated with surgery for AIS (21). In this study, the “per patient average charge” was significantly higher in the West region of the U.S. which also had the second lowest LOS. Average charge was not found to be correlated with LOS in this study (21). Fletcher et al. (22) demonstrated the safety of an early discharge protocol on their group of 154 AIS patients treated between 2006 and 2008 (22). Instrumentation and bone graft charges were not analyzed due to a change in supplier and hospital contracts. Overall, however, a small but significant decrease in hospital charges was observed, with a 33% decrease in room charges and an 11% decrease in therapy charges (22). In a similar study by Fletcher et al. (23) the authors revealed nearly a 50% shorter LOS as compared to traditional discharge pathway patients and with an overall decrease in complications (23). Neither hospital costs nor charges were analyzed in this study.

Both Morr et al. (24) and Rushton et al. (25) retrospectively reviewed cases of screw density and coronal curve correction in AIS surgery. Both studies concluded that pedicle screw density affected only the cost of surgery, and that the magnitude of curve correction did not appear to be affected. Another recent study by Larson et al. (26) and the Minimize Implants Maximize Outcomes Study Group estimated the amount of cost savings by utilizing the KIDS database for AIS surgery and other retrospective studies on screw position. The authors concluded that a modest reduction in pedicle screw use could reduce the national costs of AIS surgery by up to 7% (26).

During our study, there was a 9% overall average cost reduction per case after the implementation of an accelerated discharge program. The accelerated discharge program did not appear to contribute much to this decrease in costs. Instead, the greatest average cost savings was associated with the Surgical Services portion of the episode of care. There were many variables between surgeons, as noted in Table 4, but the most significant costs were associated with bone graft and spinal instrumentation. This result is similar to other studies (11,12,27). The cost savings for the least expensive surgeon (Surgeon A) were primarily from a combination of surgeon-dependent intraoperative variables, most notably lower instrumentation and bone graft costs and fewer charges for disposable sterile items.

Average Nursing costs were less during the accelerated discharge period, which was a direct result of the reduced LOS and reduced room and board charges. However, when the average cost savings per case was calculated, this cost reduction was offset by the increase in average Professional Fee costs alone, as seen in Table 3. We theorize that the increased costs associated with the insertion of epidural catheters as well as the increase in pain management consultations increased these average Professional Fee costs. All other costs increased over the study period and were not associated with the overall average cost reduction. The increase in average Rehabilitation costs is thought to be due to the increase in visits by therapist during the hospitalization. The increase in average Laboratory fees is difficult to explain, as no change was undertaken between the two time periods. We theorize that this change is related to inflation and increases in medical costs from year-to-year.

There are several limitations to our study. The study was retrospective in nature and none of the surgeons were blinded. The surgeons, nurses, and therapists, may have changed practice habits due to a common goal of safely reducing LOS and hospital costs. Surgeon B for instance, had a decrease in the average number of pedicle screws per case as well as a large decrease in bone graft costs between time periods. Another limitation of this study is that of incorrect data entry. Correct entry of all charges and costs by the operating room staff and by others while the patient is admitted to the hospital is difficult to control and assess. Some form of data entry error is likely present. Diagnostic and procedural coding errors have been well documented in other studies, and the same is likely true for hospital charge entries (28-32).

The implementation of an accelerated discharge program for the surgical treatment of AIS significantly reduced average LOS by 21%. This reduction in LOS did not contribute to any appreciable amount to the 9% decrease in the average cost per episode of care. The majority of cost savings were attributed to surgeon-dependent intraoperative variables under the direct control of the surgeon, including spine instrumentation and bone graft costs. Cost containment for surgical procedures will be paramount for hospitals as reimbursement models change across the United States. Although accelerated discharge programs reduce LOS, a greater impact can be obtained by reducing intraoperative variables under the direct control of the surgeon.

Conflicts of Interest: Author RC Goodwin is a paid consultant for Stryker. No other conflicts of interest to declare.

Ethical Statement: IRB approval was granted by our institution for this study.